The Sublime Coastline of Brazil

Posted on October 20, 2016 by dannyashkenasi

It’s always fun when a movie shows you some impressive, exotic location and you realize “Wait, I recognize that place, we’ve been there!” ( Of course it’s even better when you can go “Wait, I know that place, I live there!”)  Such was the case when Ed and I popped the wedding video of the Twilight series, Breaking Dawn Part 1, into the DVD player.  The secret island honeymoon getaway for glamorous eternally teenage vampire Edward and his winsome bride Bella had a natural coastline character that we recognized as undeniably Brazilian.  A little internet digging revealed that the vacation resort Hollywood rented to stand in for the island hideaway responsible for bed-busting and feather-flying vampire-on-human deflowering was an exclusive holiday rental called Casa em Paraty.

Casa em Paraty is actually not on an island, as suggested by the movie, but along the shore of a lagoon that points deeply inland like a large maritime index finger, south of the town of Paraty along the coastline between São Paulo and Rio de Janeiro.   Ed and I explored this same coastline for several days during the first days of our first tour of Brazil together in 2012.  It is a fantastically evocative landscape, with verdant mountains undulating to one side, and green islands protruding out of the waters like forested bubbles.

We drove from São Paulo over a mountain road towards the coast.  Our first view of the coastline was of the city of Caraguatuba below and the island of Ihlabela across the strait.

Ilhabela is very popular with Paulistas (São Paulo city dwellers) during the summer holidays.  But we arrived in August, which is winter in Brazil, so we practically had the island to ourselves.

Ilhabela was formed by volcanoes.  The long cooled top of the main volcano dominates the center of the island. 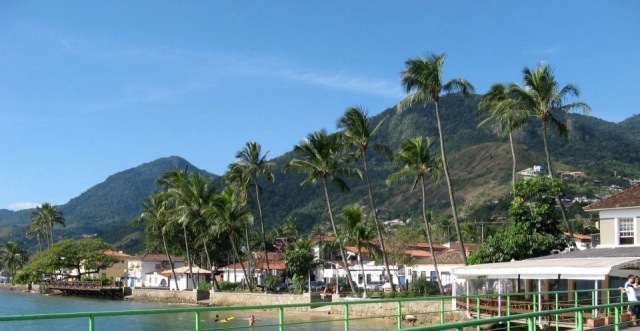 Many exotic plants would capture our camera’s eye.  I’ll share just one plant picture, this particularly beautiful banana tree.  The banana berries (yes, bananas are members of the berry family of fruits) are bunched like a crown atop, while the massive flower hangs pendulous and heavy below.

Ed and I would also take countless pictures of the countless bird species we’d encounter (OK, enough, or count me out!).  I’ve already shared pictures of the eagles, parrots, toucans and the incredible Tuiuius we saw later in the Pantanal.

However the birds that dominate Brazil’s landscape more ubiquitously than any other are the vultures.  We would see them all over Brazil.  And this picture capturing a vulture in its full Far-Side like essence was one of the first we took on the island of Ihlabela.  A few more unexpected vulture sightings will be included later in this piece.  But let me just reiterate, just because I didn’t include vulture pics in the other Brazil posts on this blog doesn’t mean we didn’t see them all over, flying around the Sugarloaf, in the Amazon, the Lençoís, everywhere. 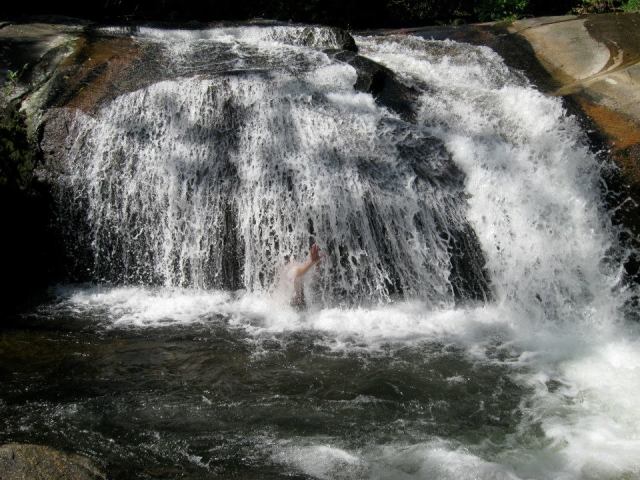 Ilhabela is famous for its many waterfalls.  That is Ed hiding behind the curtain spray of one of them.   Further downstream of that fall the waters created a natural water slide, scooping out a track through the stones.  That’s Ed at right zooming down …

… and being deposited into the pond below.  It was a fast and bumpy ride.  It’s not like nature scooped out a perfectly smooth and safe path in the hard rock following the safety regulations of US water parks.  Both Ed and I wound up with a few scrapes and bruises.  But no regrets, it was wild and fun.

This church in Vila, the main town of Ihlabela, was built in the 16th century by slaves. It would be the first but by far not the last time churches would confront us most directly with Brazil’s past history with slavery (For more read here or here or here).

The following sunset views are of the Brazilian mainland and nearby islands, as seen from Ihlabela:

Below: what happens when Hans Christian Anderson’s little mermaid abandons Copenhagen for a tropical climate.  And takes on a more masculine identity. 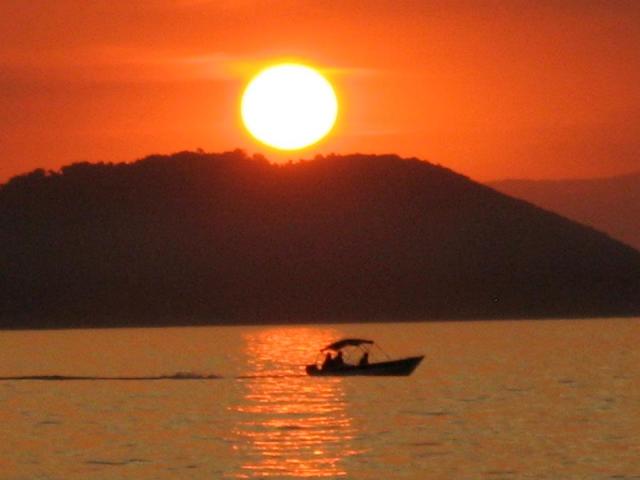 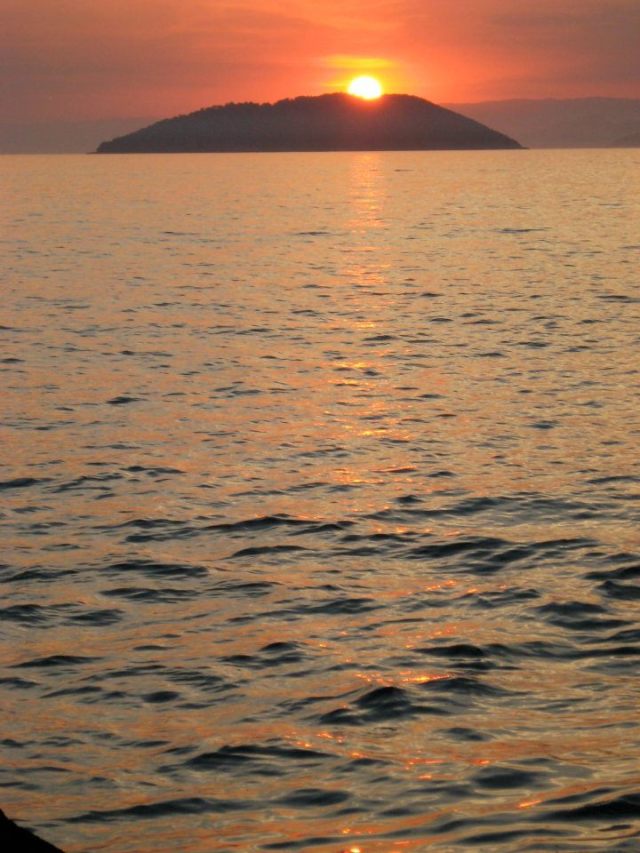 Eventually we left Ihlabela and drove up the coast to Paraty.  We again passed Caraguatuba and its neighbor Ubatuba.

I wondered whether they had any relation to the Wagner Tuba or the Sousaphone, and what they would sound like together in a big brass quartet.

It was misty and rainy much of the day we ambled up the coast.  Enough of an excuse to include Antônio Carlos Jobim’s classic about March rain in Rio, “Águas de Março”.  After all, we’ve got Jobim’s take on “Brazil” as today’s blog opener, and he is probably the most famous Brazilian musician I have included in these blog posts, so giving him a double take makes sense here.  I particularly like the playful conclusion of this duet version: 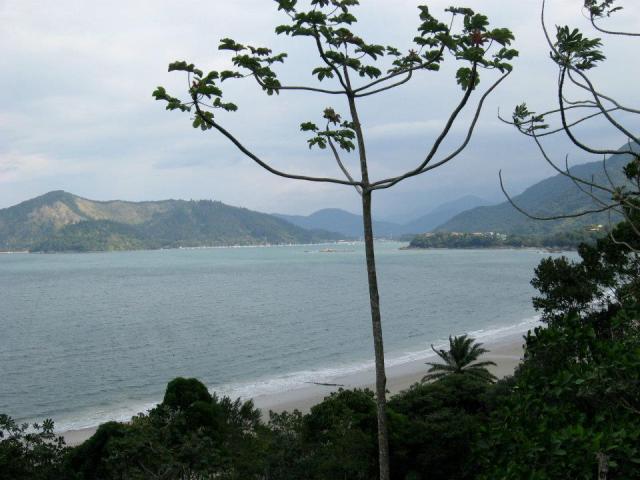 That lagoon with the famous Hollywood honeymoon suite Casa em Paraty is tucked away just over those hills on the horizon.

Because of the weather and because I’m a bit of a geek, I made a lot of jokes about the Misty Mountains on our ride to Paraty.  Here is another misty inland mountain view, now over the rooftops of Paraty. 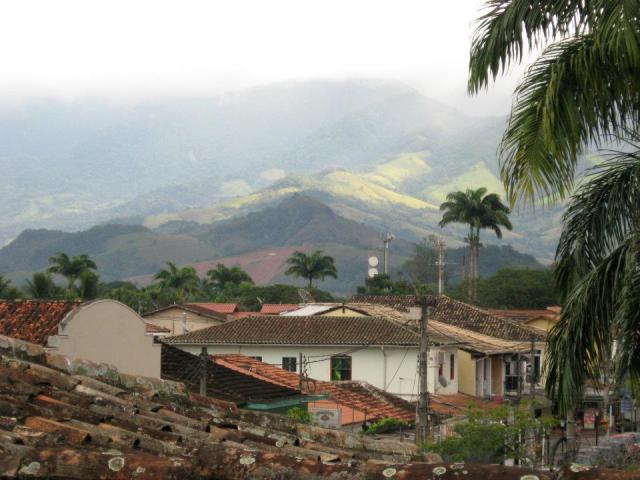 Paraty is a well preserved colonial harbor town.  Only Olinda rivals it in Brazil for complete century old preservation and beauty.  It is a popular stop for major cruise ships, which anchor off the coast and organize day trips for their passengers via ferry boats. 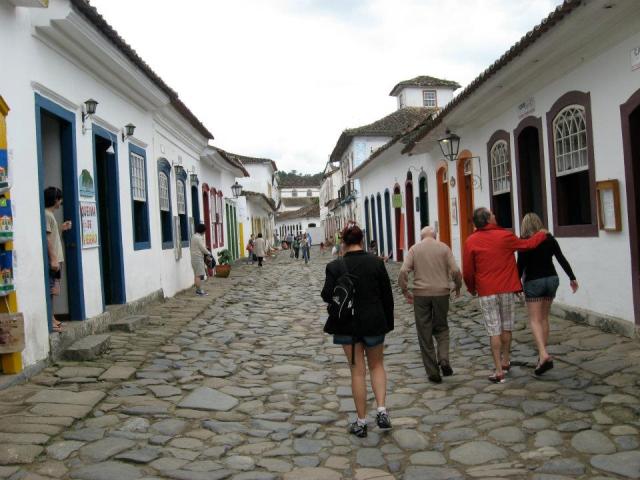 Paraty’s buildings hail from the 17th and 18th centuries.  As do its cobble stone streets.  That’s state of the art of 18th century comfort, but a bit tricky for 21st century feet.

When the tide comes in, some streets closest to the shore get flooded. 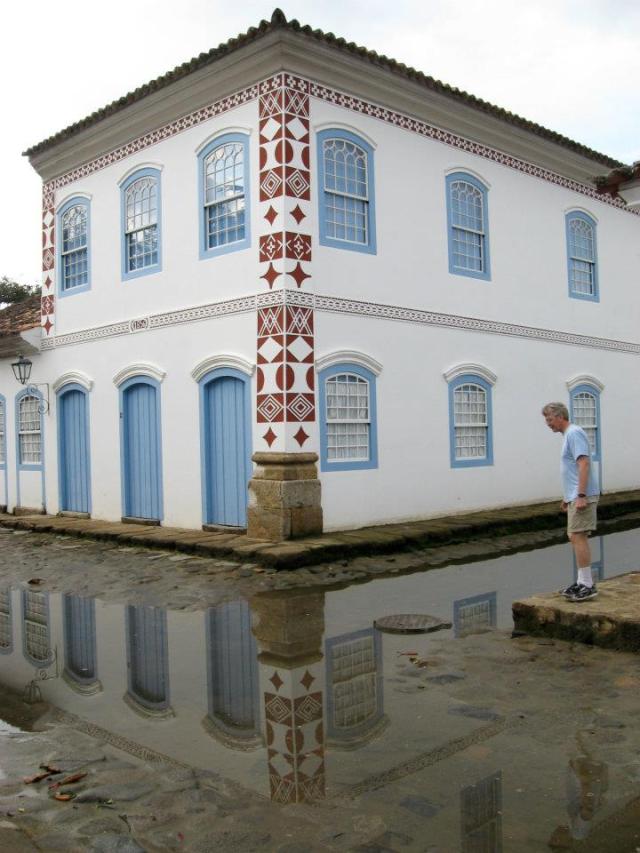 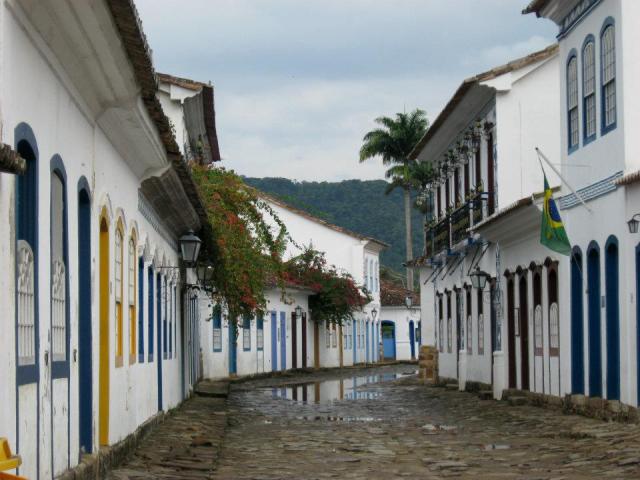 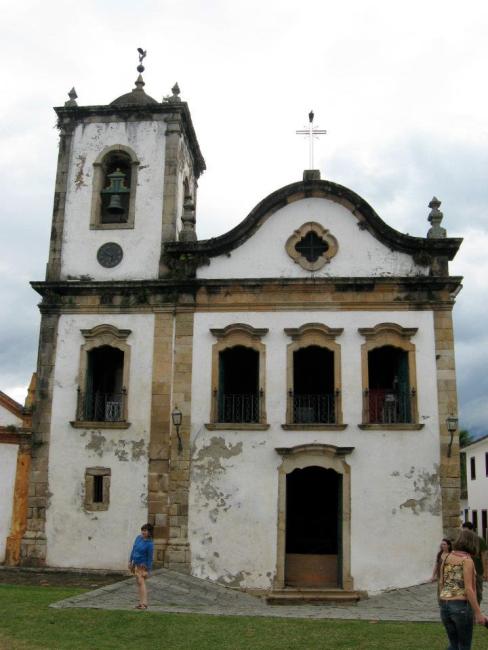 Another one of Gary Larson’s perfect vulture silhouettes…

Or maybe the poster art for The Exorcist IX: Paraty… 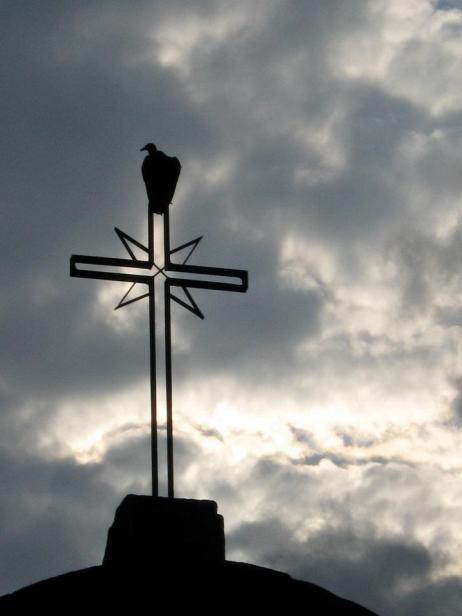 And here a close look at Paraty’s vultures in all their scavenging glory. 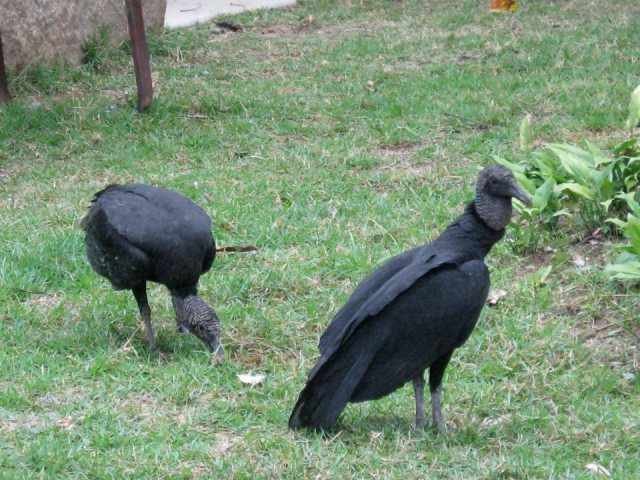 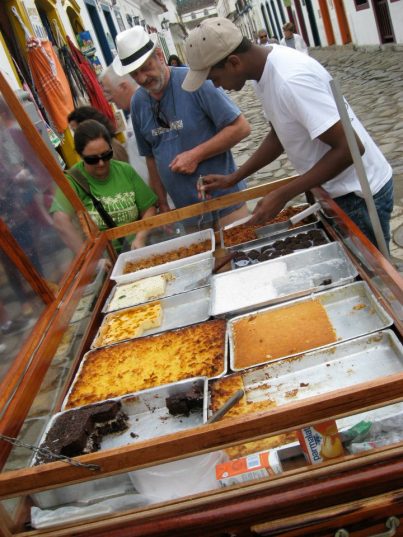 Brazilian cuisine is not exactly famous for its pastries.  But that doesn’t mean one can’t find exquisite desserts.  Passion fruit mousse is always a good bet in stateside Brazilian restaurants, if a bit difficult to actually find in Brazil itself.  But Paraty’s street vendor offer some delicious pastries, including an amazing passion fruit cream cake.

Brazilians also do great things with corn. Like corn ice cream (out of this world good!) or these delicious Pamonhas – hot corn mash wrapped in corn husks.  You can see I really like them, can’t you? 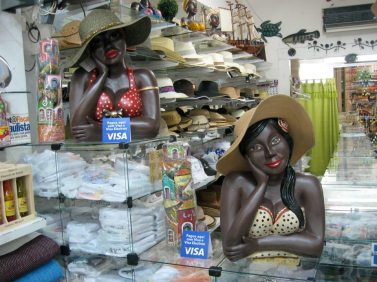 Do you see the statues of the women waiting by the open window of the shop above?  These are called Baianas, referring to women from Bahia, and are very popular icons in this part of Brazil.  You can get a good view of two in their classic pose (but bedecked with sunhats for sale) towards the right in a Vila souvenir shop, as well as decorating a Paraty balcony below.

From Paraty it was a half-day’s drive to Rio de Janeiro, the subject of two of my first blog pieces of musically accompanied two-fisted Brazil tourism.  My final ones are just around the corner.  Below are some parting shots of Paraty and its coastline. 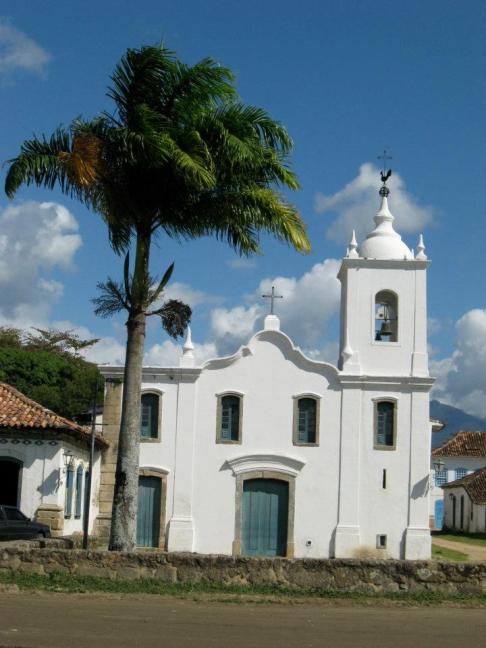