Welcome back to Rio de Janeiro, currently in the midst of hosting the Olympic Games.  Ed and I are currently in other parts of Brazil, but four years ago we were all over Rio.  I already shared our impressions of Ipanema, Copacabana and the Sugarloaf, now let’s explore some other awe-inspiring places in the city.

And when you think Rio and inspirational, it’s hard not to think of the Cristo Redentor statue on top of Mount Corcovado.  The statue of Christ the Redeemer looking over the city is such an indelible image.  There may be many cities with a greater claim on religious importance, but no other city has an image of such unmistakable religious significance laying claim to being its most recognizable emblem. 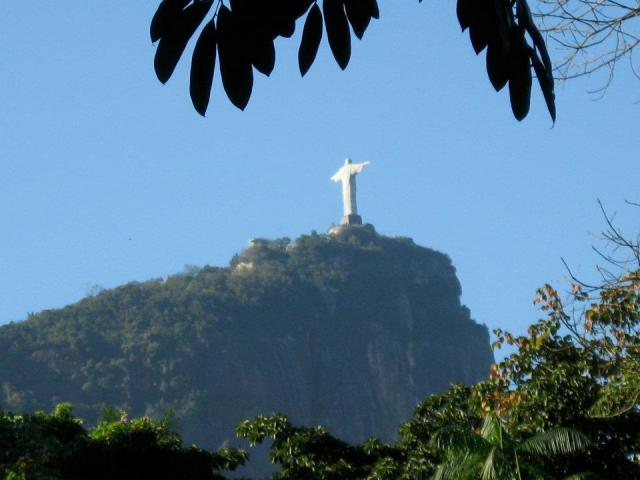 Therefore this post’s Brazilian musical example must be Antonio Carlos Jobim’s song Corcovado, in which the narrator finds hope and redemption in a new love sharing his bed, while he awakes in the morning and looks out the window at the statue on top of the mountain that gives this love song its title: 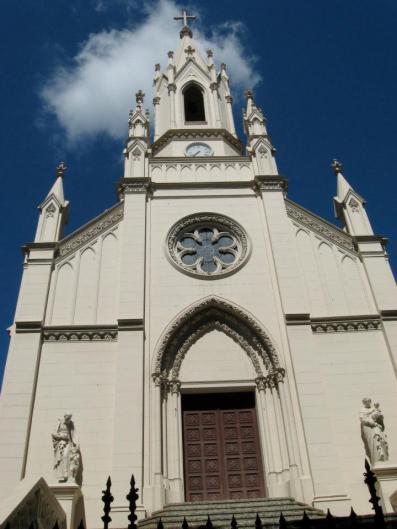 Today’s  tour through Rio will conclude on Corcovado.  And I promise you I will be sharing pictures of Cristo Redentor that are unlike the typical postcard pictures or Google Images you will find of the iconic location.  Our visit there turned out to be less than typical, and that will be reflected in my photos.

Until then we have plenty of Rio to explore, and to stick to the theme of Rio Religioso we will be viewing Cathedrals of Awe, mostly religious structures in the strict definition of the term, but also cathedrals of culture, that inspire their own spiritual awe.

I was particularly taken with the way the modernist cathedral reflected off the multifaceted glass of the nearby tall office towers.

Then we went inside the Metropolitan Cathedral. 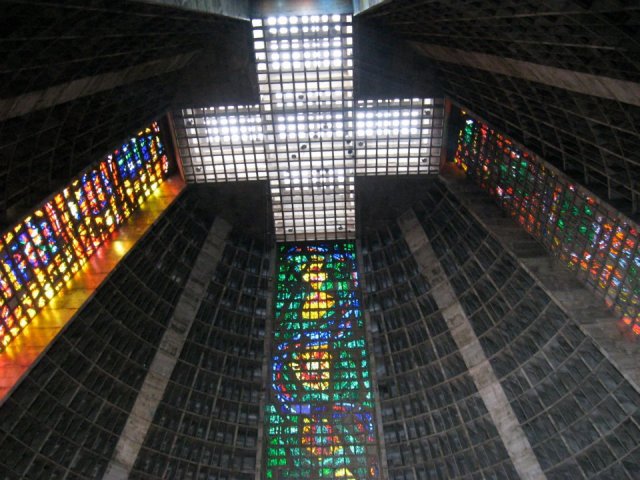 Massive statues, above see Saint Francis, guard the entrances into the Cathedral. 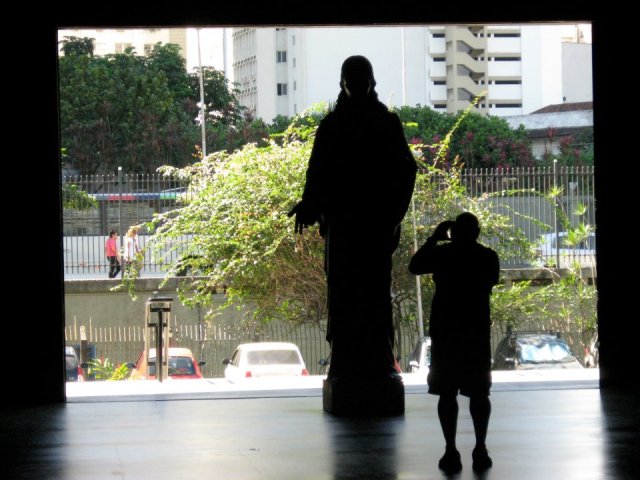 And below another view of Cristo Redentor on Corcovado.  It’s a view that dominates most of the Rio de Janeiro skyline.  So in anticipation of the “climax” of this blog post I will include a series of favorite “Jesus” songs.  Since I am what I would call “spiritually unaffiliated” no church hymns will be included.  But spiritual uplift and/or contemplation are inextricably linked to each musical choice.

Let’s start with a really famous one:

From the Catedral Metropolitana we walked uphill towards the Santa Teresa neighborhood.  The roads are very steep, more so even than these pictures indicate.

And we didn’t yet know that a hidden religious secret would reveal itself to us.  We might have noticed it as early as standing outside the Metropolitan Cathedral, but we wouldn’t see it for ourselves until much later.  The photos we took along the way however would drop big hints… 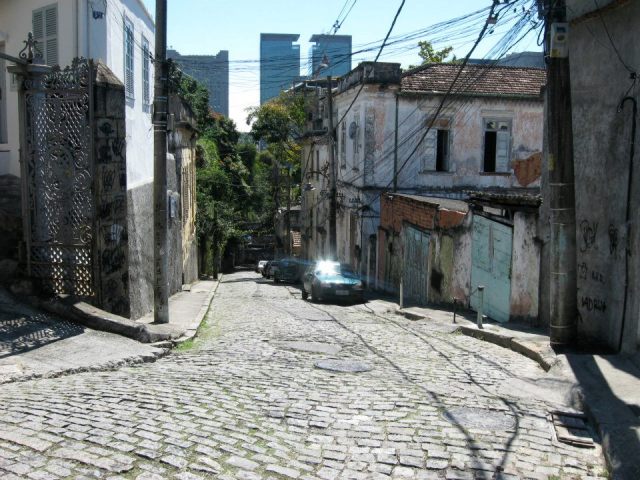 The Sugarloaf in the background.  We’d ascended it previously.

Below is the Park of the Ruins – Parque Das Ruinas – the former grand villa of the “Mistress of Elegance” of the Belle Epoque of Rio de Janeiros: Laurinda Santos Lobo. Laurinda held sparkling salons featuring the great artists of the time.

Many years later, Laurinda’s small palace having fallen to ruins, the city commissioned architects to design walkways and glass structures to create a “noble space of culture and contemplation”.  A cathedral to Art, if you will. 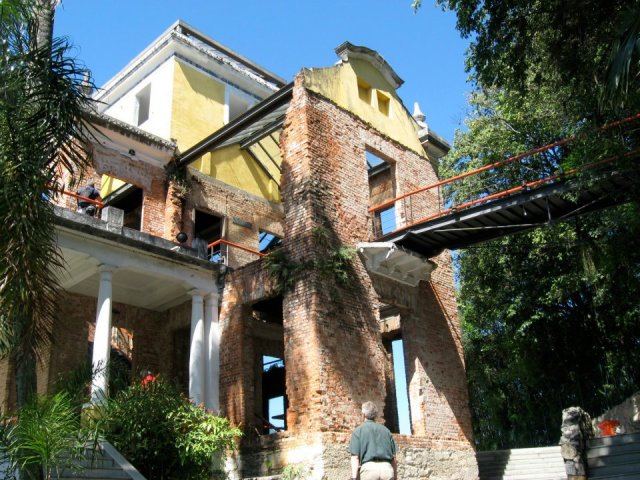 A portrait of the “Mistress of Elegance”: 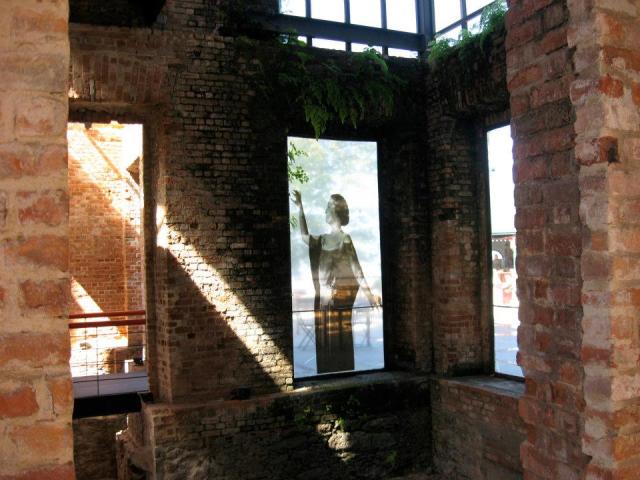 With a few turns of perspective the Park of the Ruins quickly becomes a Cathedral to Escher: 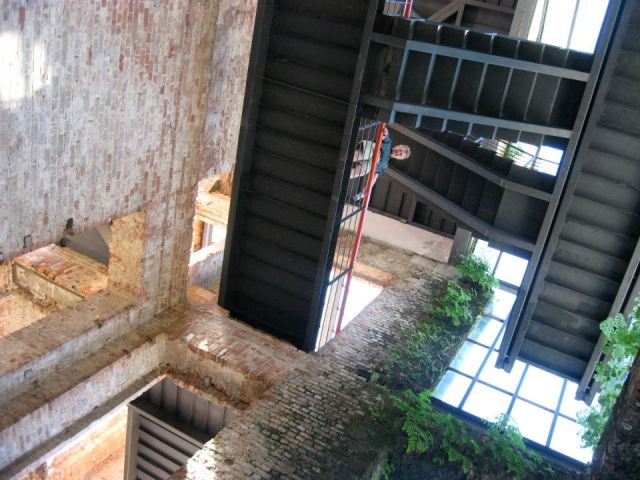 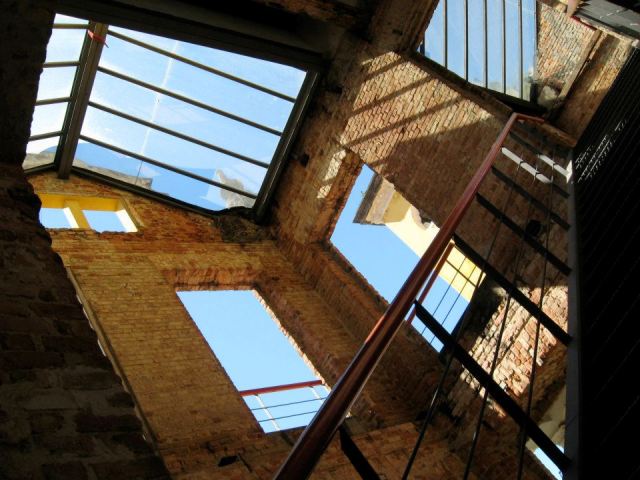 A view of the Metropolitan Cathedral from the Park of the Ruins. 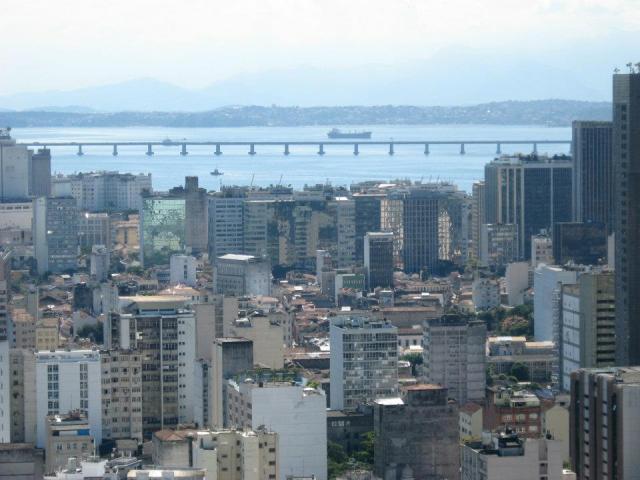 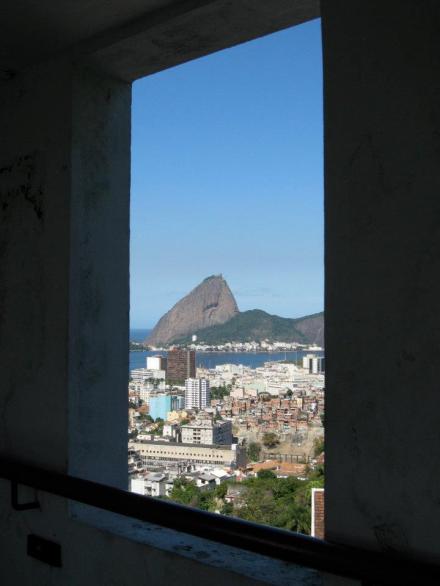 And looking up as we walked down this long staircase / road, we saw what was hidden in plain sight in the office towers across from the Metropolitan Cathedral.  A statement of faith carved into the negative space of these modern skyscrapers:

Time for another “Jesus” song.  The propulsive synth beat of Depeche Mode: 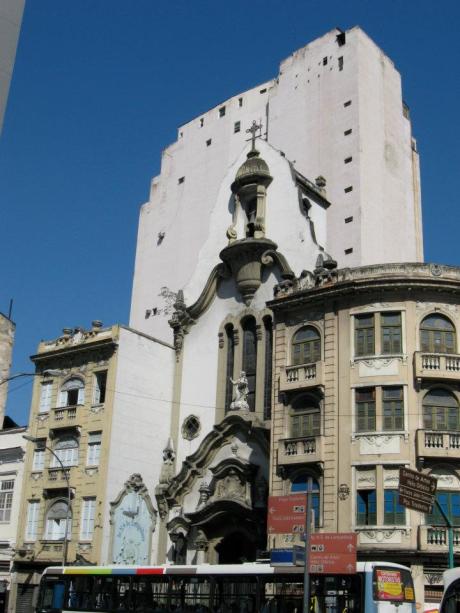 A Cathedral to Literature:  the city library.

Walking inside is like reliving Belle’s awe entering the Beast’s high shelved library: 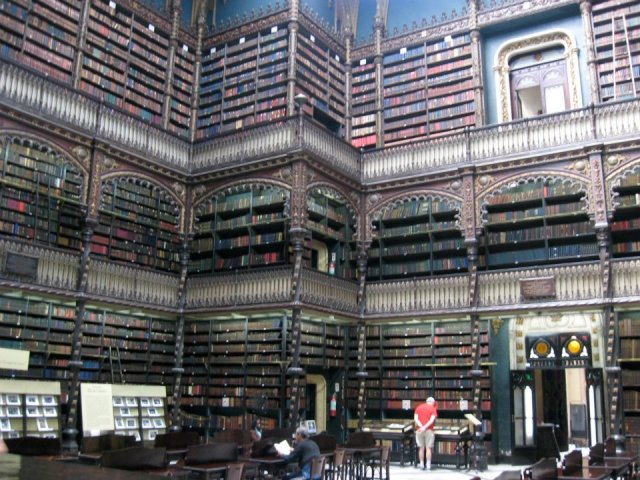 In an ocean of Catholicism, small pockets of Protestantism bubble up, as illustrated by these statues modelling pioneer Presbyterian congregations. 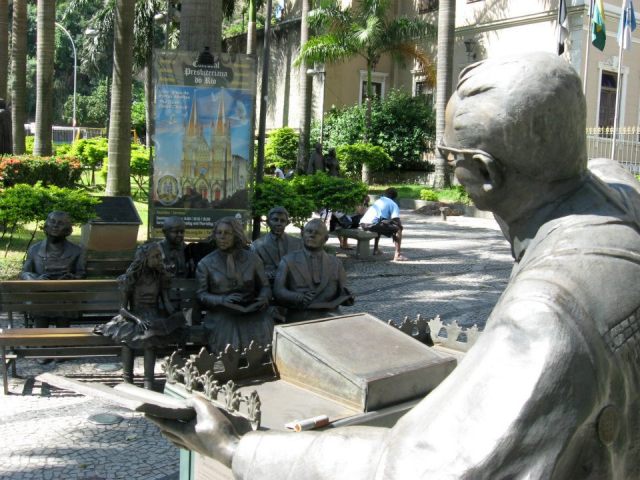 And then there’s this “cathedral to oil”, the Petrobras building.  Headquarters of the Brazilian Petroleum Corporation.

The mega-gilded church of Sao Francisco: 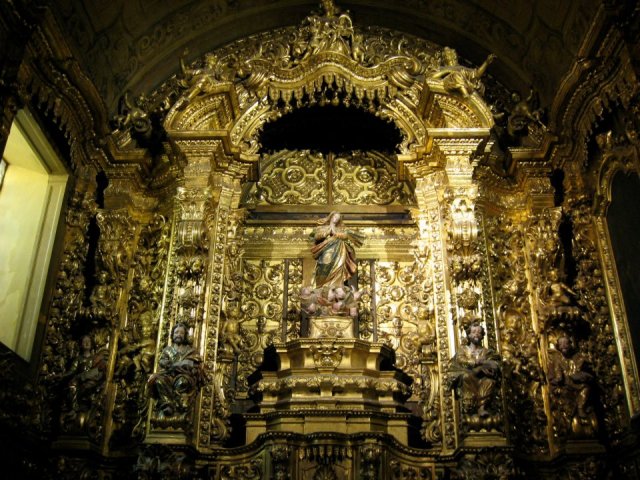 A church of the dramatic arts: 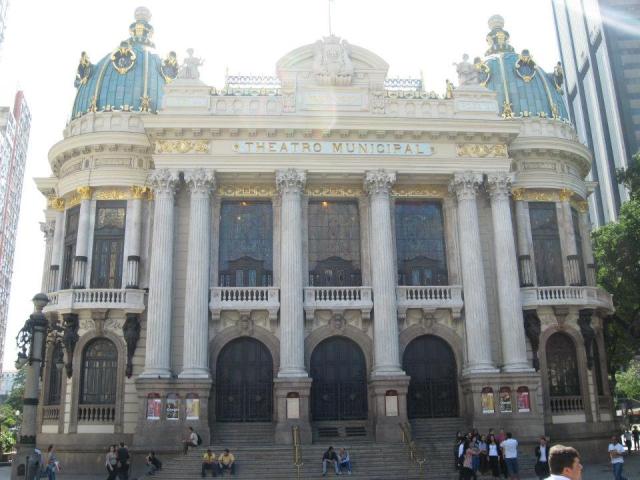 No, that is not a potential suicide on the roof.  Although he sure looks alarming.  Turns out he is a statue.  Have faith, this guy will never jump.

OK.  You’ve been patient.  We have finally arrived at the Trem Corcovado.  Where we will take the tram up Corcovado mountain.  We will finally see the famous Cristo Redentor up close.

But it will not turn out as expected…

While we make our way, here my perhaps most favorite song with “Jesus” in the title:

Jesus to a Child – George Michael

As the tram chugged up Corcovado, clouds approached ominously…

And by the time we arrived atop, Cristo Redentor was shrouded in mist. 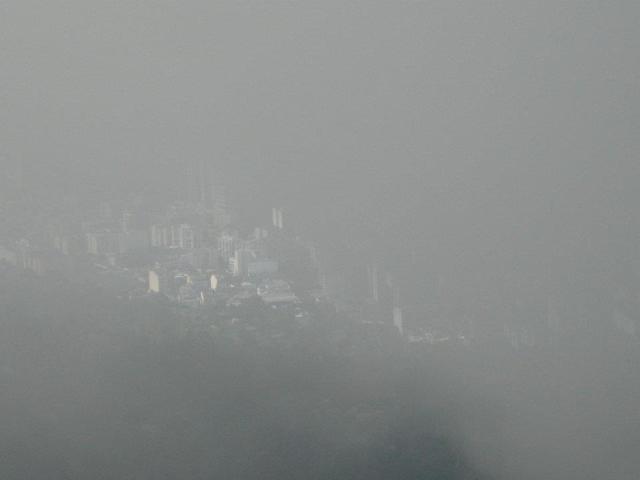 Occasionally the mist would clear or thin out enough for us to catch a glimpse.

But for long stretches of time, the clouds would dominate the view. 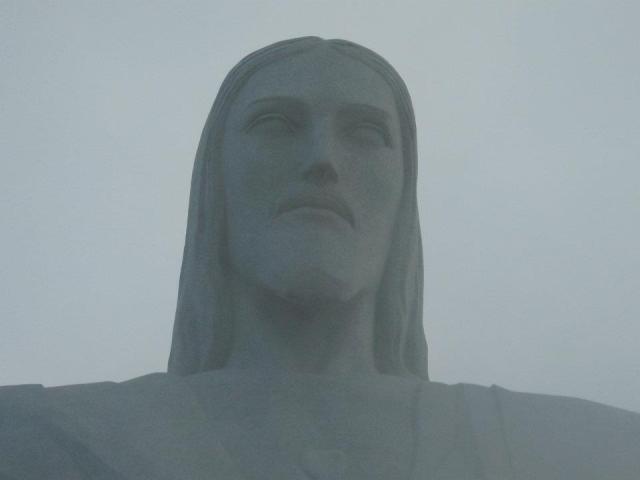 For two hours we stayed, waiting for the clouds to lift.  But most of the time the crowd was standing before a white curtain.

Not being able to see the statue didn’t stop tourists from doing the tourist thing.

For every 5-10 seconds of view, there were minutes and minutes of white shrouding.

I debated whether to include this final favorite song with Jesus in the title, not because I don’t like it, but because it is a tough song about hating in Jesus’ name.  So with that as a caution I will include it, but I will use asterisks in the title where the artist John Gant originally doesn’t… (I wouldn’t normally, but something about the nature of this particular blog post compels me).

We never did get the stereotypical sunny blue sky view of Cristo Redentor that everyone knows (and thus expects) from the many official photographs.

Well, we did, the next day again, but again only from afar… 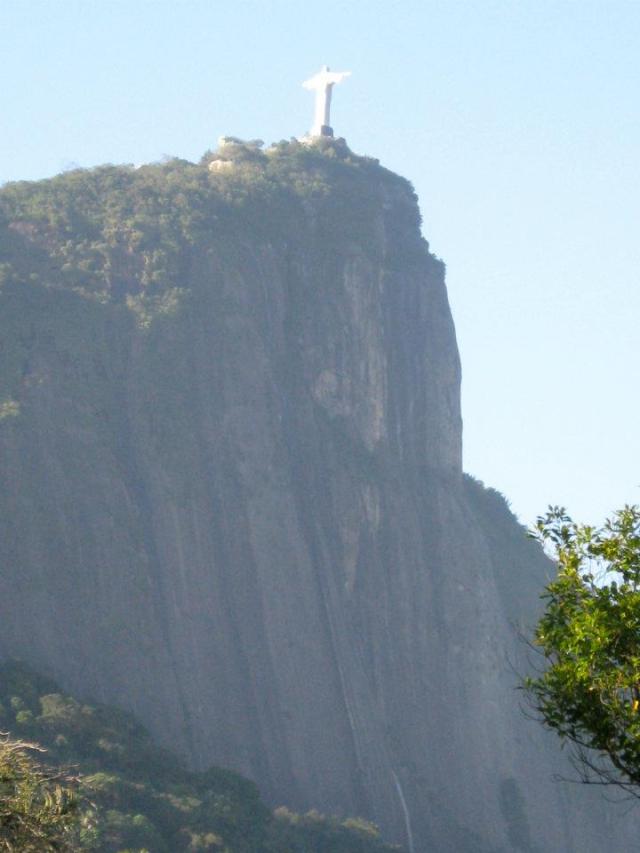 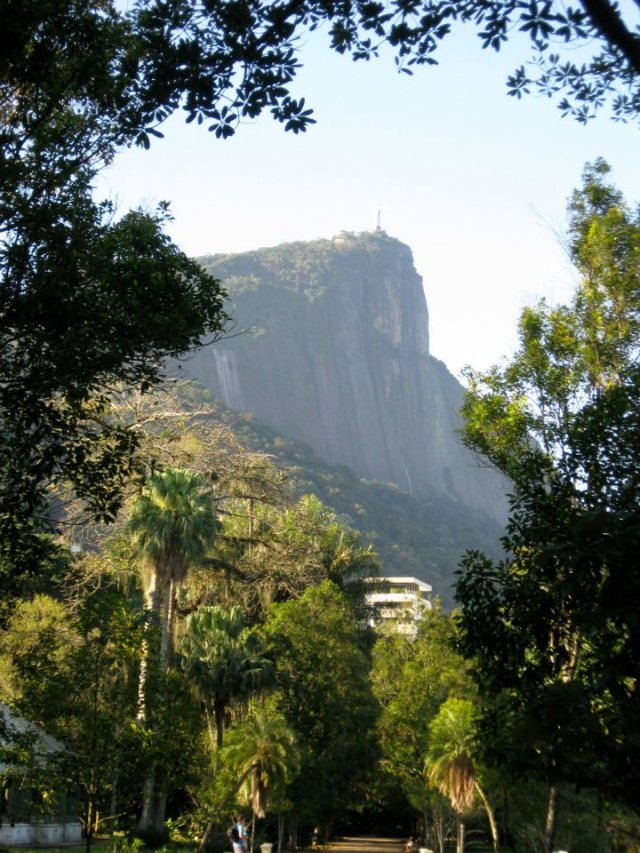