BRAZIL – The Beauty of Olinda – The Light of Tieta

Posted on September 25, 2016 by dannyashkenasi 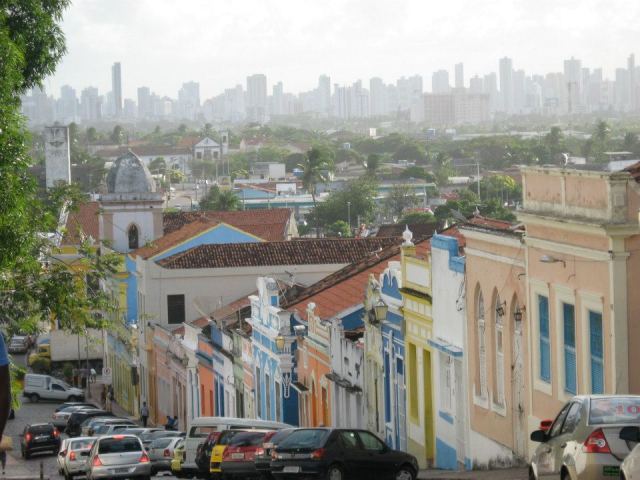 Olinda is a beautiful historic town, one of the oldest in Brazil, founded 1535 in the state of Pernambuco.  The large metropolitan capitol city of Recife looms just south, contrasting modern high rises at the horizon with the quaint colorful buildings and handsome churches of historic Olinda.

Today let’s stroll up and down the sometimes steeply inclined cobblestone streets of Olinda, taking in the beauty of the town as well as some of its history; for example how slavery has left its mark quite literally on the cobblestones…

Olinda’s great historical trauma was the looting and burning it suffered under the Dutch in the 17th century.  Guides will repeatedly make reference to that short-lived time of occupation.  For example, the religious statue to the right was hollowed out so that the Portuguese could smuggle gold unnoticed past the Dutch invaders.

When later in our tour I would get glimpses of what 400 years of slavery had wrought, it put the Portuguese trauma of Olinda’s handful of years under Dutch occupation in some perspective.

On the highest point of Olinda stands the Church of Grace, and at the left corner of the photo sits “the Problem of Olinda”, an unsightly modernistic viewing platform.  I’m sure it provides pretty views of Olinda for tourists (we didn’t bother), but it does mar the view from every other vantage perspective that includes its presence:

Another view of the Church of Grace:

Church of Carmo, with the multicolored Atlantic ocean behind it (beautiful waters, but dangerous: this area suffers from one of the highest incidents of shark attacks in the world):

A train for tourists:

As we stroll past the quaint colorful houses of Olinda, let’s listen to my favorite Brazilian song:

This song was written for the movie 1996 “Tieta do Agreste”, starring Sonia Braga, based on Jorge Amado’s popular novel “Tieta”.  Ed and I got a sense of how popular this song is in Brazil when we heard it performed during an open air concert in Salvador; everybody in the large crowd joyously sang along to the catchy chorus:

And if you would like to sing the chorus in English, it translates (and fits the melody) thusly:

(Although I prefer to sing the less directly translated but more pleasing: 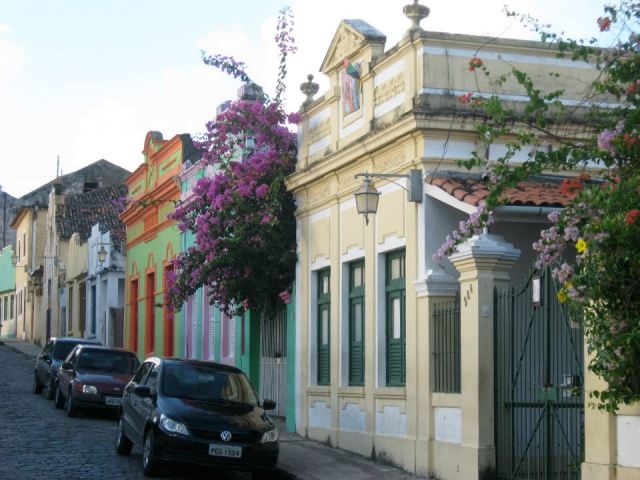 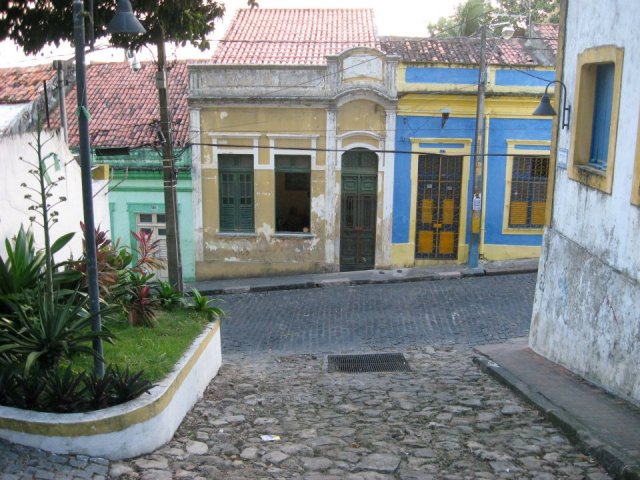 This hill up to Igresia da Misericordia (Church of Mercy) is ascended by the faithful on their bare knees every May 1st.

Olinda’s guides like to point out Olinda’s Three Moorish Houses, buildings in the Moorish style:

Next to the third Moorish building is a house whose facade is covered in Portuguese porcelain tiles.  We saw a lot of Portuguese porcelain art in the Convent of St. Francis.  I was particularly struck by the example below.  Depicting Christ’s crucifixion is universal to Catholic churches.  But depicting Christ’s circumcision, now that is something I haven’t seen anywhere else:

Inside the Church of St. Francis: 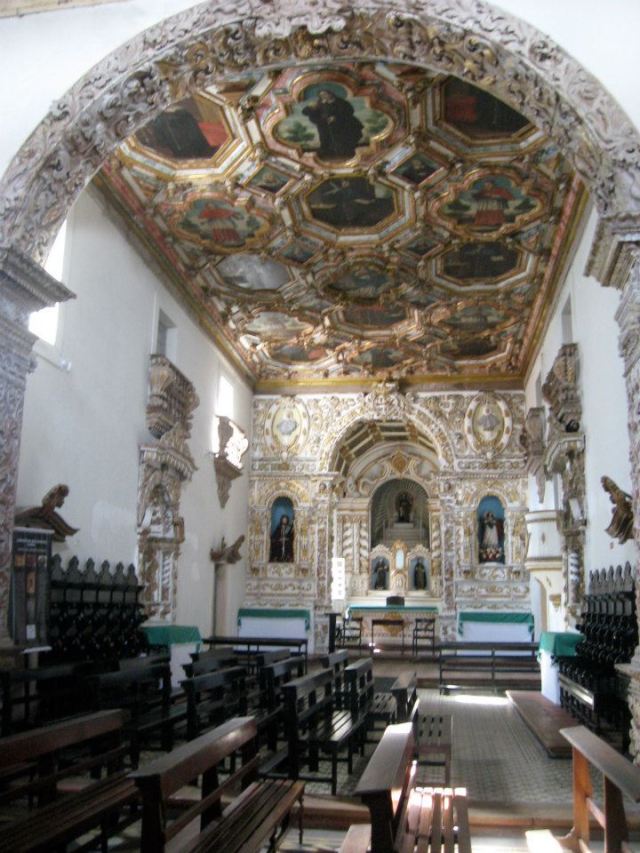 Below behold the Church of St. Benedict’s amazing gold altar.  This monumental gold artifact was taken apart and shipped to New York City in 2002, where Ed and I viewed it, impressively lit and framed by black drapes, in the main floor of the Guggenheim museum. We didn’t then know we would see it again ten years later in its original situation in Olinda, and had not remembered it until we came upon it again unexpectedly.

These friezes were made by slaves in Olinda and then shipped back to Portugal to be painted:

Which is why all the faces have blue eyes. Even those with obviously African features.

Below are the Cabeca dos Pretos, AKA the Heads of Blacks.  Why are these cobblestones called that?  It’s not a pretty story.

The Portuguese would bury deceased slaves standing up with their heads sticking out of the ground. This way they wouldn’t have to dig as wide or as deep as for regular burials. Which leads us to this unsettling nickname for these particular cobblestones…

Right by the Cabeca dos Pretos sits the former slave market. 6-8 Slaves would be forced into one cell, with only one sliver wide opening of air for two cells at at time.

Now the cells are shops for carnival masks and dolls. 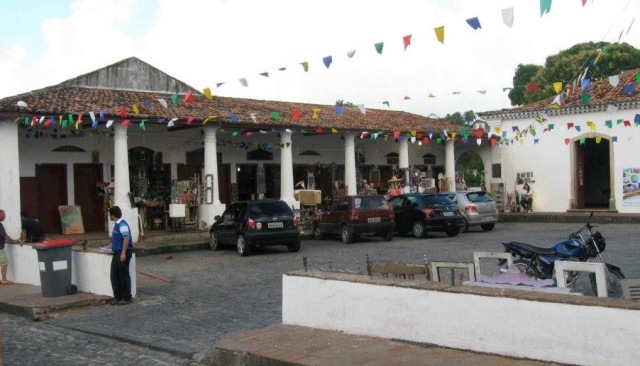 Carnival is a big deal in Olinda.  About 1,2 million souls crowd the narrow streets of small Olinda during Carnival.

Below, one more trace of history: the ruins of the first synagogue ever constructed in the Americas.  This one was built and used in secret by Jews who had officially converted to Catholicism (coerced of course).  Secret synagogues like this one once kept the practice of Judaism alive all over Latin America.  Around these particular ruins now an artists’ collective flourishes. 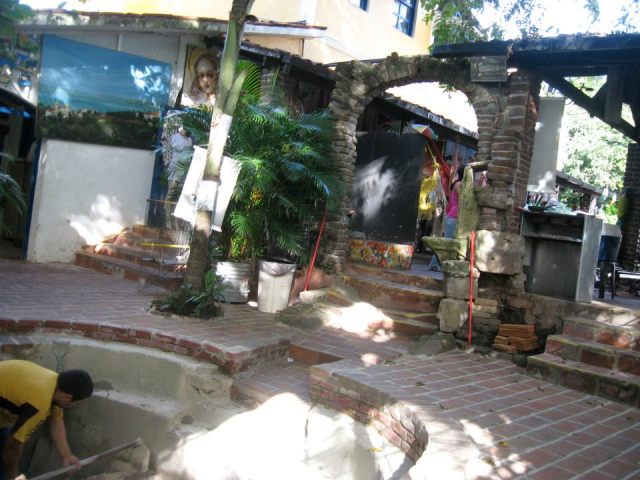 In addition to being a prime Carnival destination, an important tourist town of authentic 17th century architecture, Olinda also functions as an artists’ mecca.  Galleries are everywhere.  And so one also encounters the occasional cheeky touches of modern art incursions within the historical topography: 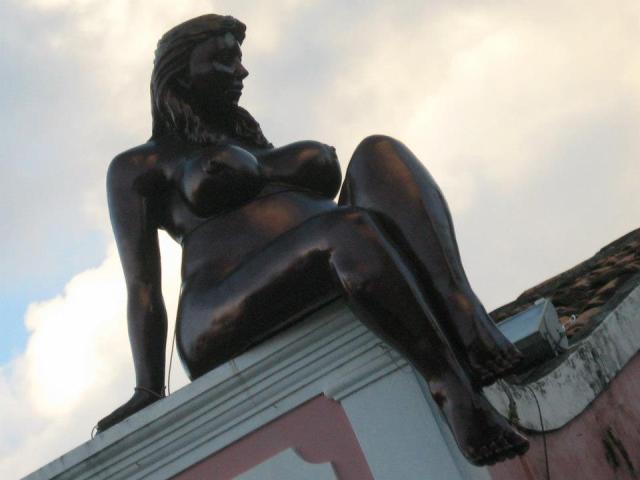 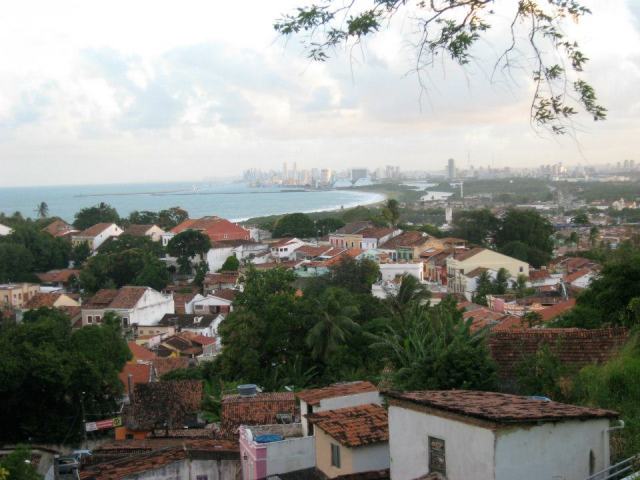