LENÇÓIS – The Bedsheets of Brazil

Posted on September 6, 2016 by dannyashkenasi

Brazil – Xavier Cugat and his Orchestra 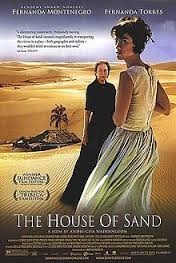 Around ten years ago Ed and I saw an extraordinary Brazilian movie called “The House of Sand”.  It is set in a landscape of endless, blindingly white sand dunes.  So unusual and otherworldly the film seemed to be taking place on another planet.

Turns out The House of Sand is set and was filmed in the Lençóis Maranhenses, the “Bedsheets” of the State of Maranhão.  The Lençóis is a nearly 600 square mile region of white dunes and blue lagoons.  It looks like a white desert, but it wouldn’t be right to call it that.  More accurate would be calling it the biggest whitest beach on the planet (Further down this post I share the what and why of this unique environment).

Ever since seeing “The House of Sand” I have wanted to explore this fantastical landscape in person.  And this August we did it.  It required flying into São Luís, the capitol of Maranhão, then taking a 4.5 hour bus to Barreirinhas, the largest town near the Lençóis Maranhenses, from where most tour excursions originate.  But even once in Barreirinhas, most routes  into the “Bedsheets” require a long, bumpy trek over sandy roads.  On the map below, only the black dotted line represents an asphalted road.  The red dotted lines are deeply sandy paths over which four wheel drives slosh and jump and jostle their way for at least an hour before you reach the white dunes.  It’s like riding a bucking kangaroo.

Among many musical bonbons I will share two Brazilian musical tracks with Lençóis in their title.  The first one, a jazz instrumental, definitely refers to the region, since it is called Lençóis de Areia (Bedsheets of Sand).  The second one, simply called Lençóis, which I will share at the end, may just be about actual bedsheets, as it clearly describes lovers in bed, but the music and the landscape still go well together.

We will be exploring the Lençóis from 5 different approaches, each revealing another distinct side of this incredible world.

Lençóis Approach #1 – from the northern beaches by Atins 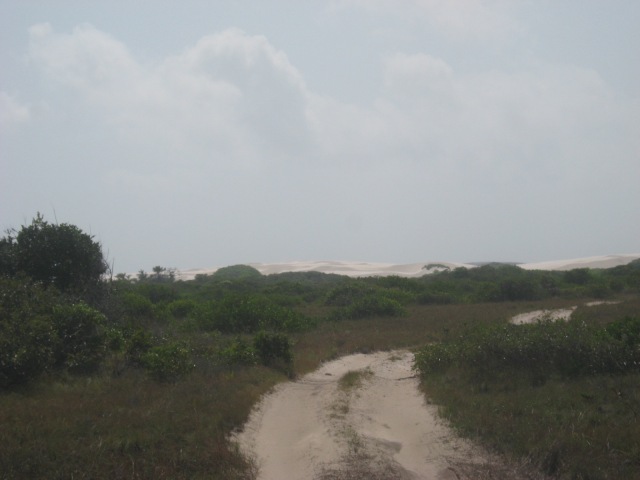 After over an hour driving north from Barreirinhas towards Atins, we got our first glimpses of the famous white dunes.  But these are still outliers and the full splendor of the Lencois was still to come. 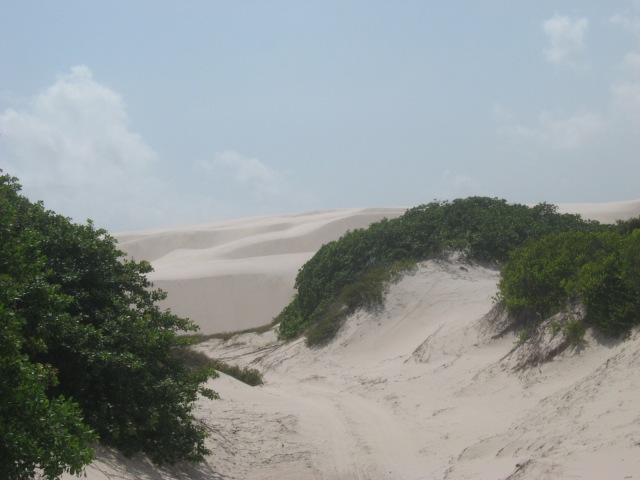 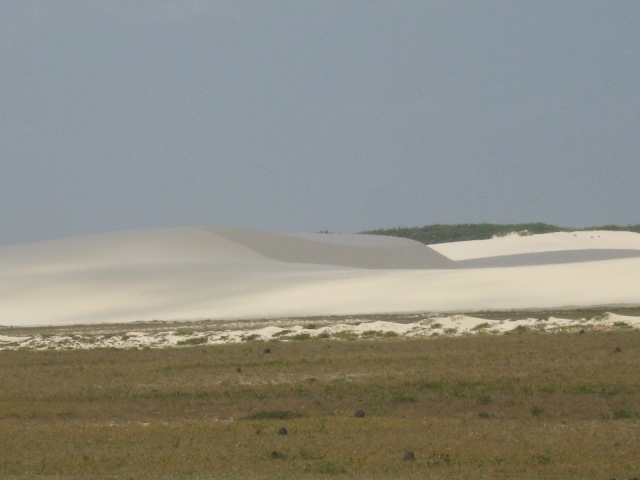 We then drove west along the shore.  Near the ocean there are wide expanses of impossibly white sand. 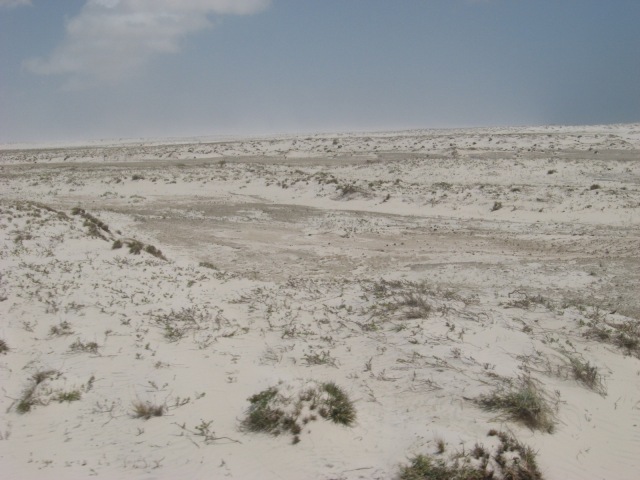 Eventually we left the northern shore area and drove south into the dunes.

The next three pictures are of the first lagoon we encountered.

I can’t resist including this song:

How to explain this phenomenon?  This cribbing from a Smithsonian article does a good job explaining the Lencois:

Two rivers run through the Lençóis Maranhenses—these rivers push sand from the interior of the continent to the Atlantic Ocean, depositing thousands of tons of sediment along Brazil’s northern coast. This alone isn’t a unique phenomenon—sediment flowing through rivers helps form beaches along many coastlines. But in Lençóis Maranhenses, the sand doesn’t stay put. During the dry season, especially during the months of October and November, powerful winds from the equatorial Atlantic whip the sand back inland, carrying it as far as 30 miles and creating the vast, sculpted sand dunes for which the park is famous.

At first glance, it looks like a picture-perfect desert—miles and miles of sand with almost no vegetation. But it’s not a desert—Lençóis Maranhenses gets about 47 inches of rain each year, making it too rainy to be officially considered a desert (which get less than ten inches a year). From the months of January to June, the area is inundated with torrential rainstorms. Rainwater pools in the valleys between dunes creating thousands of crystal clear lagoons.

In July, when the park’s lagoons are at their peak, some reach over 300 feet long and ten feet deep. And although these lagoons exist for only a few months a year, they are not devoid of life. Interconnected lagoons link up with neighboring rivers creating channels for fish to enter the temporary pools. Other fish, like the wolffish, spend the dry season dormant, burrowed far enough under the sand to reach still-damp mud. When the wet season comes and the lagoons appear, the wolffish emerge to feed on insects and other fish that make the lagoons their summer home.

But the water world of Lençóis Maranhenses is an ephemeral one: once the dry season returns, the equatorial sun heats the region quickly, causing water levels to drop by as much as three feet in a single month. The best time to visit the lagoons is between July and September when they are at their most full and temperatures aren’t too hot. By October, the region’s winds begin to pick up, making a trek through the sandy landscape less enjoyable.

We swam in the lagoon.  The water was wonderfully warm and absolutely clear.  Perhaps the most delightful dip I have ever taken! 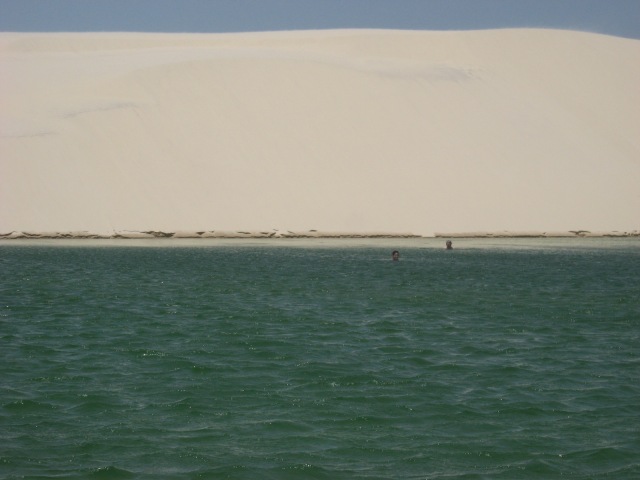 Lençóis Approach #2 – from the East at Lagoa Bonita 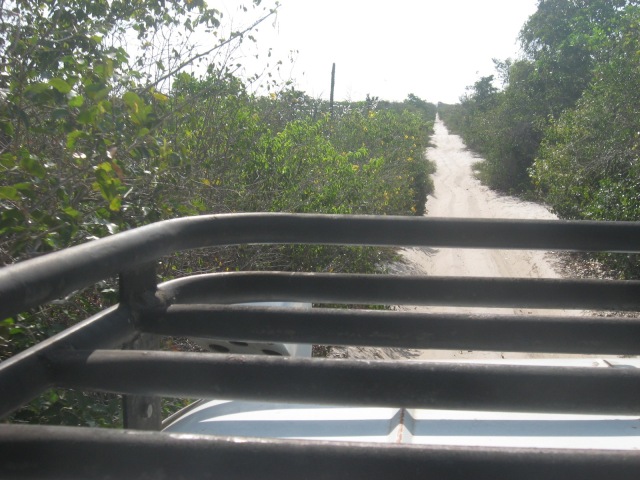 After another hour of bum, knee and elbow busting bumpiness we reached the “base camp” at the Lagoa Bonita entrance into the Lençóis. 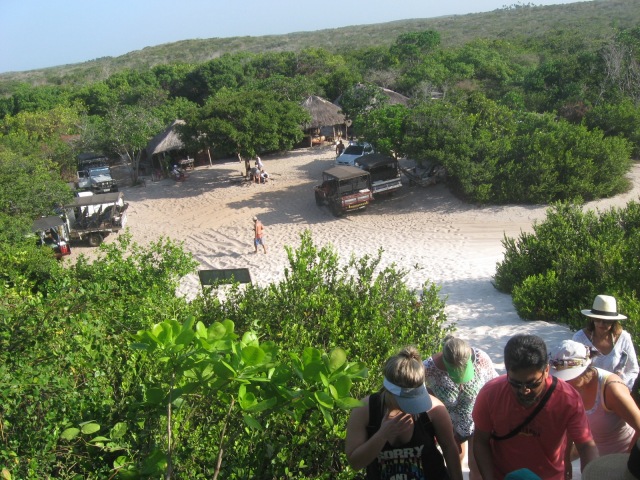 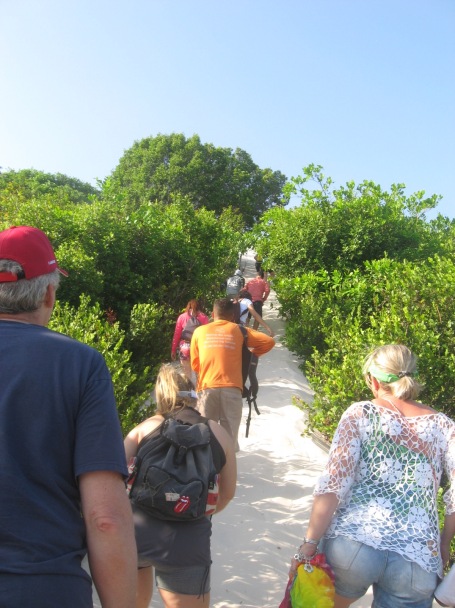 We needed to climb up a sandy steep path upslope. 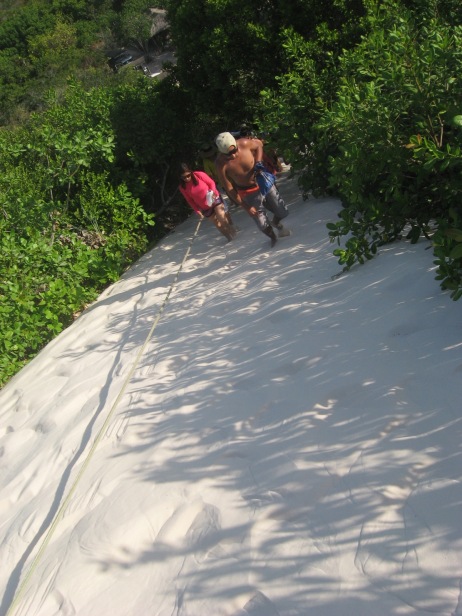 It got so steep that a rope was provided to help people get up.  It wasn’t easy. 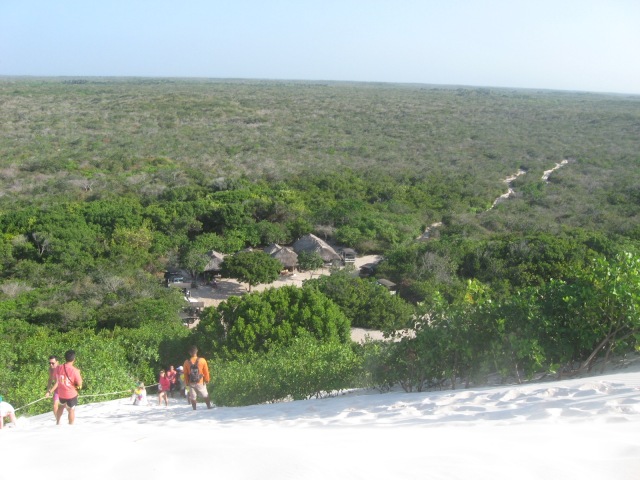 The Lençóis dunes sit at least 100 meters high at this part of the park, as if held together within a massive bowl of greenery. 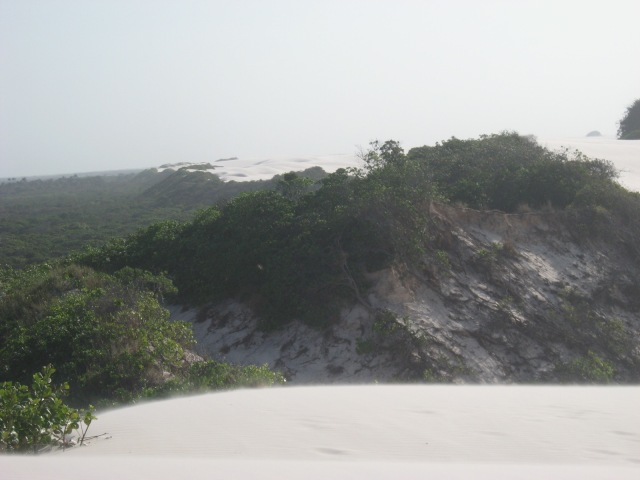 And once you have clambered up the steep side of the “bowl”, this is the view that greets you: 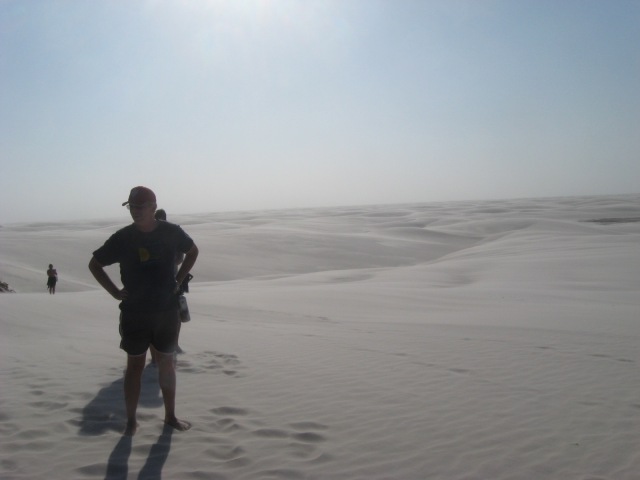 This music, from the movie “Interstellar”, describing a world being covered and choked by sand, seems evocatively appropriate here: 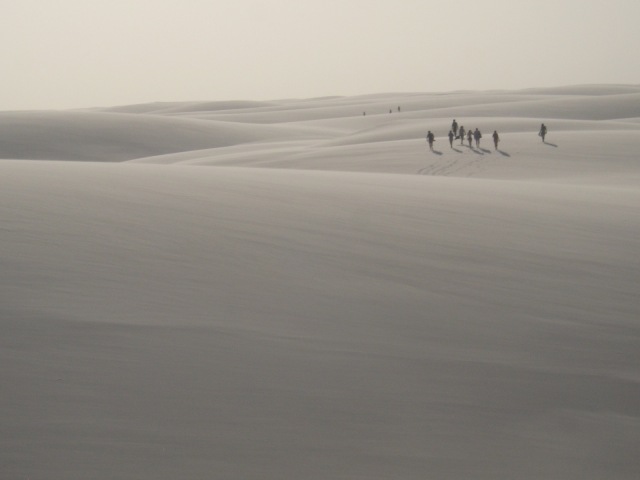 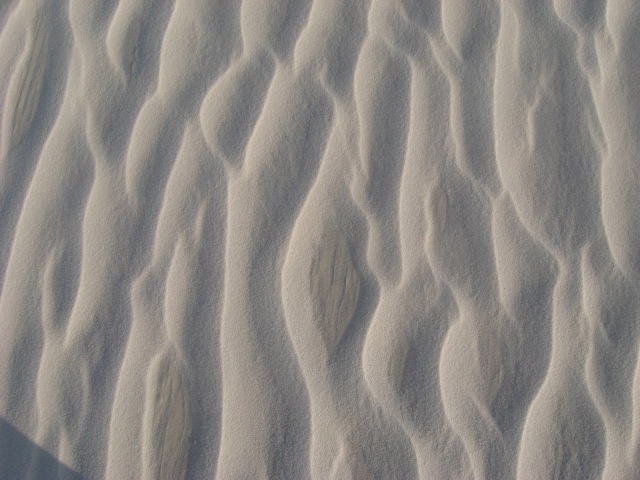 There are some steep slopes at the sides of many of the lagoons.  The thick sands makes rushing down these extreme angles very safe and lots of fun.

Since this lagoon is called Lagoa Bonita, I kept hearing Madonna’s “La Isla Bonita” in my head, but substituting each reference to the title with “Lagoa Bonita” in stead.  It works pretty well with the music.  Try it yourself:

And here the “sexy” Lençóis song I promised.  I’ll include lyrics and translation too:

The patterns scattered over your skin, and the taste of cachaça on our tongues.

Your naked body turning, and your hand snapping on my face.

Your black closed eyes enjoying it, your salty belly coming and going.

Your warm body written, sculpted, the night watching it all smiling and sipping. 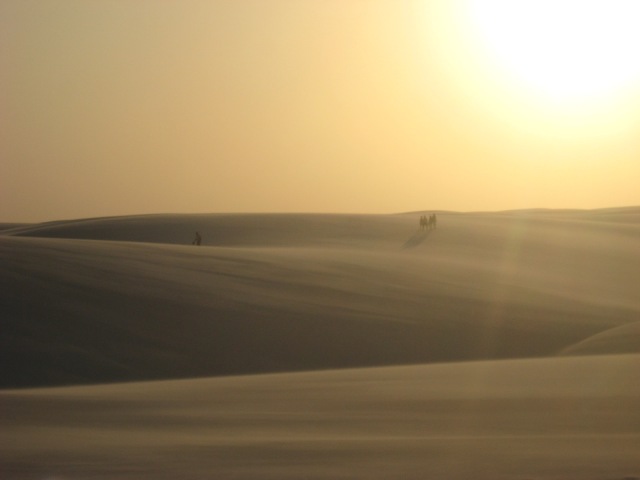 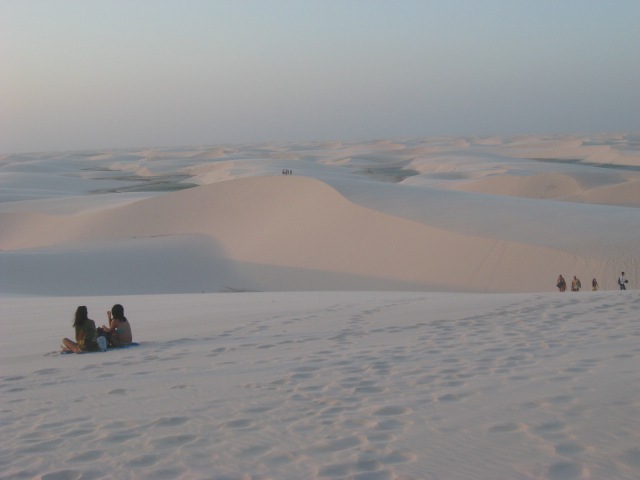 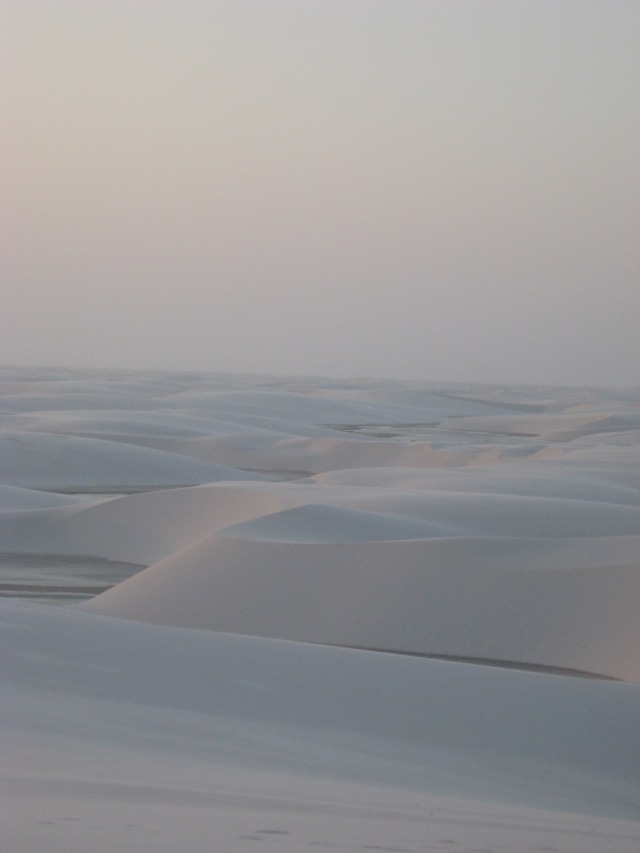 This is the first of two pieces on the Lençóis.  Three more unique approaches into this wondrous world will follow next, including a magnificent flyover. 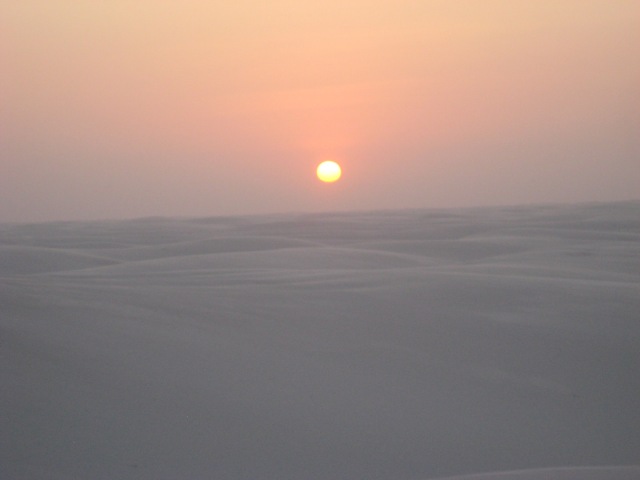 1 Response to LENÇÓIS – The Bedsheets of Brazil