The large Yigal Ozeri portrait of Whoopi Goldberg behind the information desk by the entrance into ART NY 2018 was a hint that this year’s exhibition would have more than its fair share of celebrity sightings.  Not only celebrities being depicted in the art.  Also celebrities exhibiting.  And by that I mean both famous artists like Pablo Picasso and Marc Chagall as well as famous actor Adrien Brody and famous quarterback Joe Namath.

We’ll get to those and much more intriguing art.  And just as in my previous two blog posts on Art NY there will be another guessing game of “art” songs (with the answers hidden in the tags at the bottom of the post). 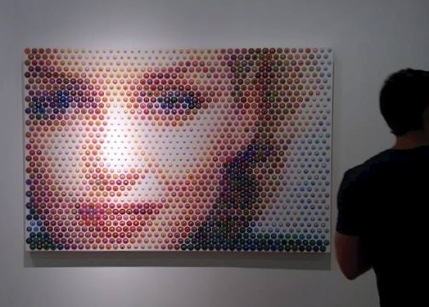 But this year for the first time I will also include some cool videos of art that changes over time or with shifting viewer perspectives.

For example Gavin Rain’s painting (with three dimensional candy striped paint cones) of (celebrity) Marilyn Monroe, an icon who would figure in quite a few Art NY 2018 works this year:

Which artsy pop diva is stepping into the part previously played by Barbra Streisand and Judy Garland and Janet Gaynor in what movie remake directed by which 4 time Oscar nominee?

(like before on this blog and discussed above, the answers to these queries may be found hidden among the tags below) 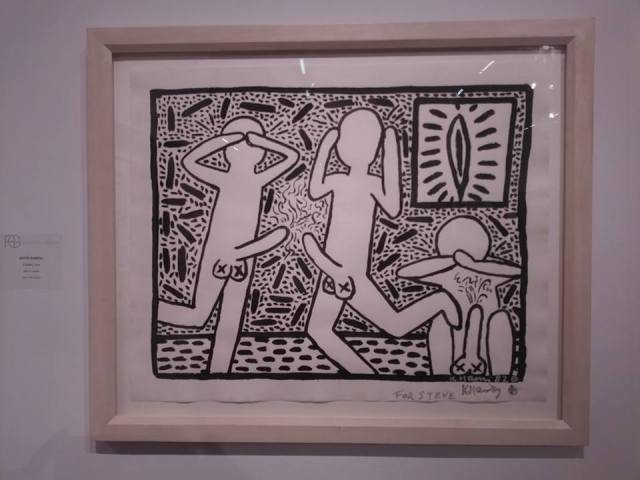 “See no vulva, hear no vulva, speak no vulva”, one might quip.

Speaking of celebrity artists, Keith Haring (above) must be included in that category, and once again ART NY had some of his work on display, including an example of his subway graffiti art (right), from early in his career when Haring would “deface” black posters which used to cover temporarily unrented subway station wall ad space.  Yesterday’s illegal agitprop graffiti art had been roughly torn off the subway wall and is now today’s glass framed, expensive gallery offering. 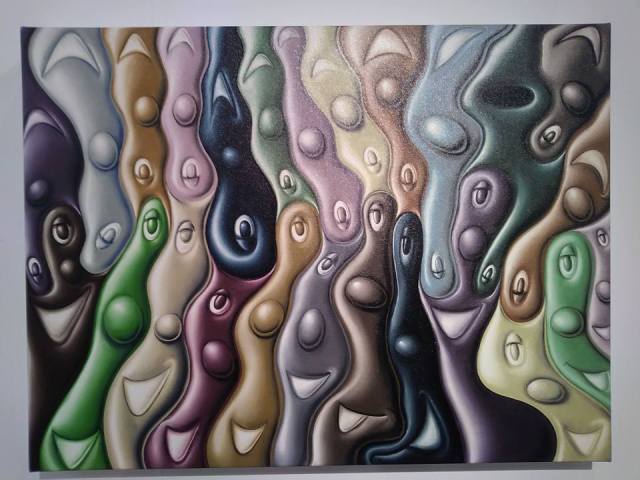 Cartoon sensibilities and celebrity cartoons come into play in a lot of pieces, like this one by Ron English:

Or you can purchase an oil painting of a tv cartoon still of Bart Simpson and Joe Namath.  Just one option of many on display at the Joe Namath Foundation Exhibition.

Which do you prefer, the yellow googly-eyed Joe or the shirtless hairy-chested Joe?

Right next to Joe Namath was Adrien Brody:

The sign at the entrance into the Brody exhibit forbade any taking of pictures inside, where Adrien himself was eagerly conversing with attendees.  Inside it looked like an artist studio with all wall spaces covered with images and collages.  It wasn’t clear what were influences, what were works in progress and what may be finished pieces.  Perhaps that was the point.

Outside the TV screen cycled through quickly edited flashes of rural imagery and Adrien. 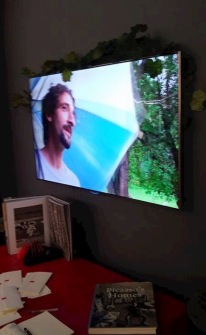 The table offered a sealed “note from Adrien” for the taking: 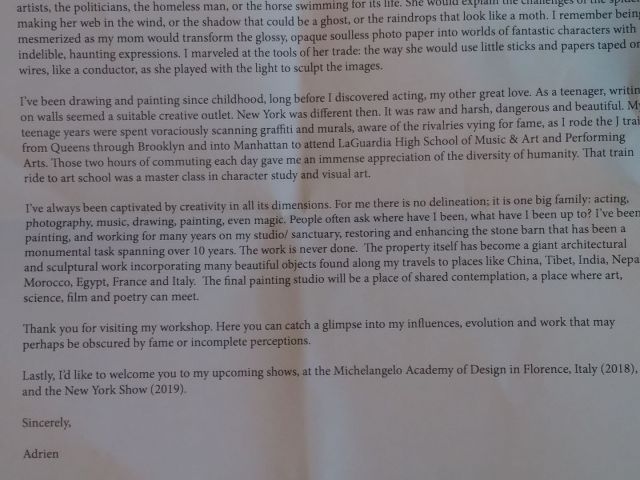 Who sings this song about children and art in which musical? 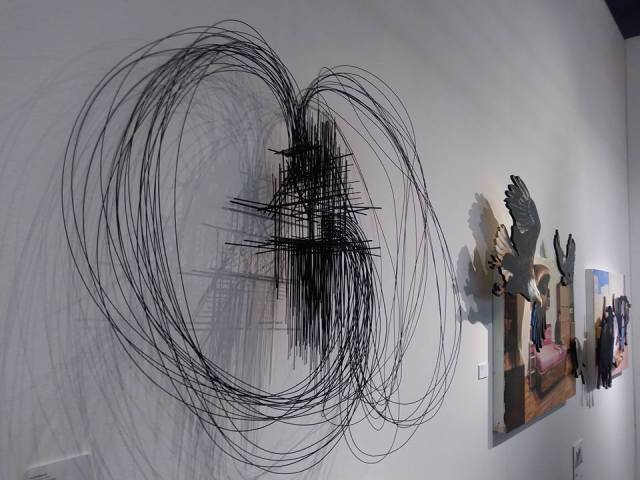 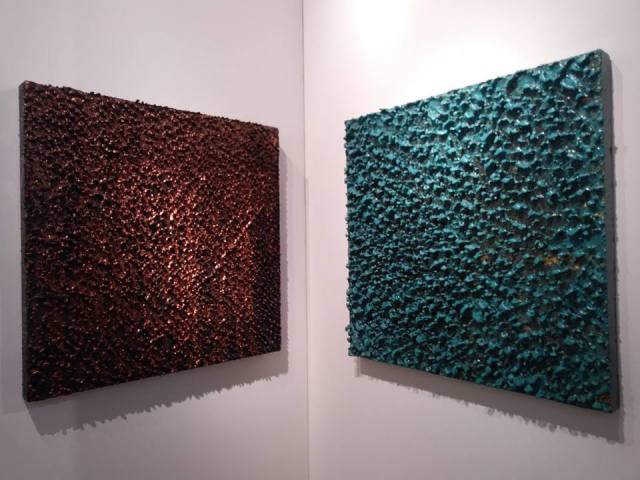 Above and below, Martin C. Herbst’s “Hidden Treasure” 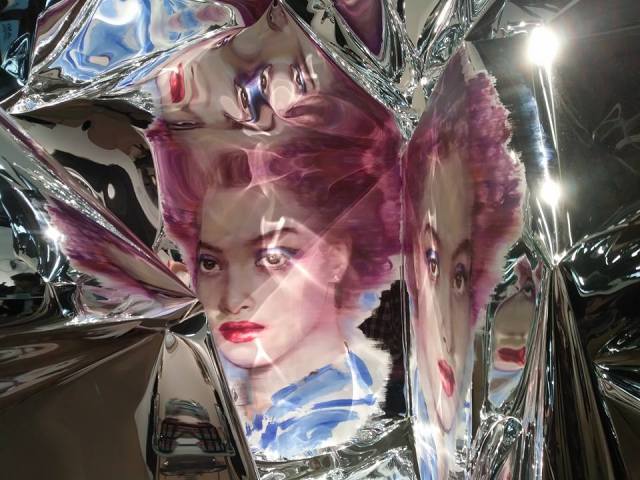 The NOART installation was an agitprop ATM machine and bank vault:

The text on the ATM screen reads:

Do Viktor Freso’s “Good Fellas” remind you of a certain Celebrity -…  I mean -… no.  I will resist… 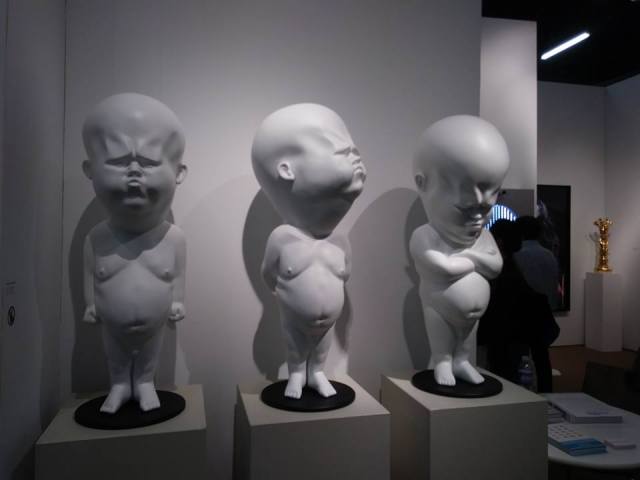 Jessica Drenk’s works are made out of thousands of pencils…

Which “Art”-y singer used to be the tall one in a famous duo, and for which animated movie based on a bestselling novel about wildlife did he record this bright tune? 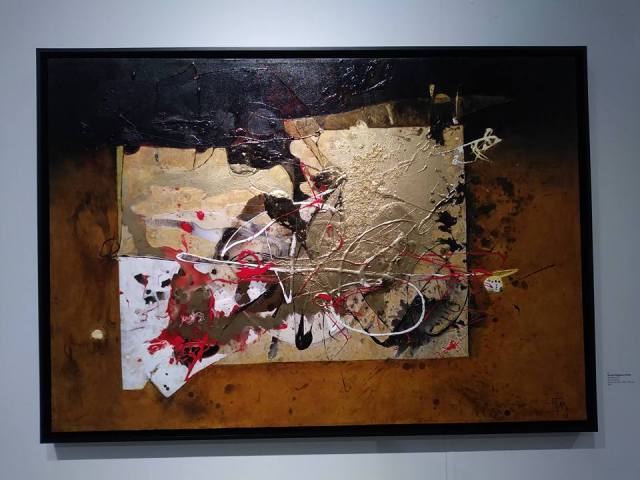 Luke Chueh is one of many featured artists with cartoon influences in their work:

SHAG (A.K.A. Josh Agle) – (The figure in the right bottom corner has his clothes segmented into meat groups like “chuck”, “rib”, “shank” and “loin”.)

Patrick Rubinstein’s “Love” is another one of many works that change as the viewer shifts perspective: 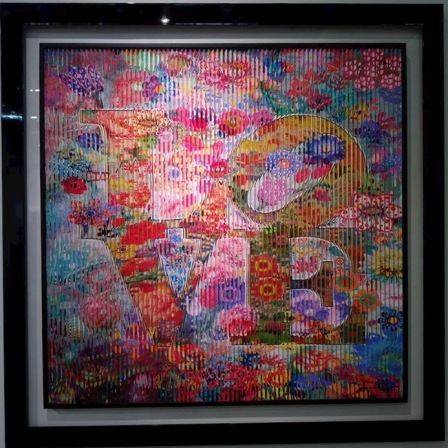 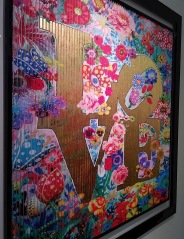 This video shows how this works with Rubinstein’s take on Picasso (I will share actual Picasso in the second installment of my ART NY 2018 posts):

This work by Ronen Sharabani is one of several video installations featured:

I have too much to share for just one post.  So there will be a part two to ART NY 2018, with more celebrity sightings and video perspective shifting.  And artsy song puzzlers.

For now I will close with the sleepy celebrities of Yves Hayat’s “Les Icônes sont fatiguées”: 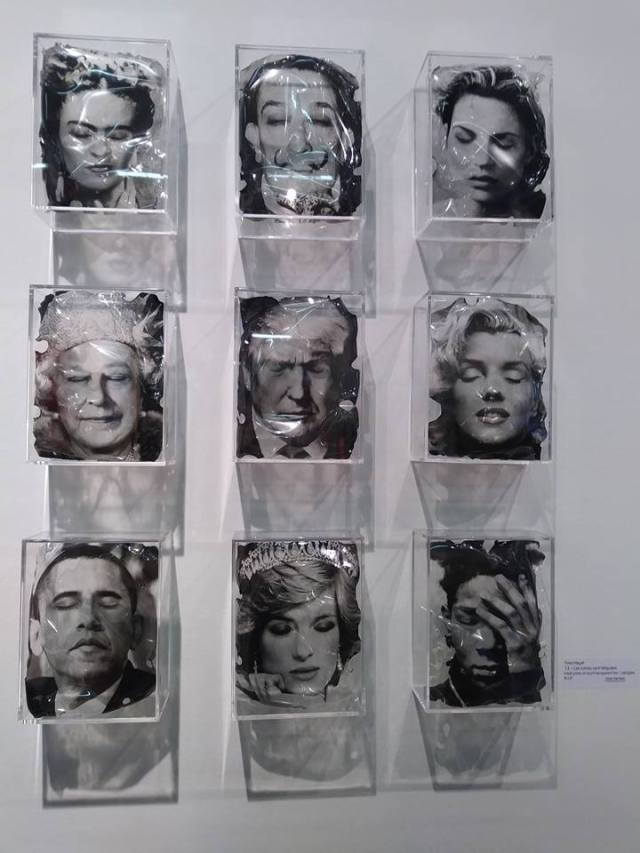