Two Fawns in the Wood Dance into the Light

Maybe it’s just a dream.  Maybe it’s real.  Maybe it doesn’t matter either way.  For the shame and the betrayal are felt just as acutely.

In the musical Speakeasy, an Alice in Wonderland take on Prohibition era New York, young newlyweds John and Jane have each spent a night of passion with lovers in separate parts of the city.  In a nasty twist of space and time, their beds are magically united, and John and Jane discover and are discovered in same sex adultery. 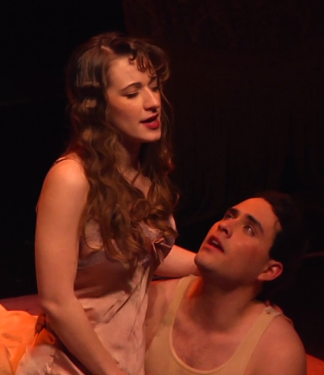 And so John and Jane sing “A Fawn in the Wood”, a fraught song of a couple clinging and pushing away, desperately afraid, of themselves and the other.  For an act and a half John and Jane sang lovely duets that only sounded like they were in harmony together (see previous post), but in actuality had them physically separate and unaware, directing their shared feelings away from the other.  Now finally John and Jane sing a proper duet, to each other, full of love and longing in the classical sense, but also full of fear, and self-loathing, a fervor to forgive and be forgiven, yet also an unspoken desire to forget, a fear of looking too closely at the truths about themselves.

The title and central metaphor of “A Fawn in the Wood” comes from Lewis Carroll’s “Through the Looking Glass” and Alice’s encounter with a fawn.  Alice, after much Wonderland strangeness, is so confused that she can’t even remember her name, let alone figure where to go.  She meets a fawn in a dark wood, that also can’t seem to remember its name.  They both walk together through the wood, Alice’s “arms clasped lovingly around the soft neck of the fawn”.  But when they come to the light of an open field, the fawn recognizes Alice as a human and itself as a fawn and flees in alarm.  Alice knows who she is again, but is left alone and lost.

And so are now Jane and John, afraid and lost together, and clinging to another for comfort, even though the other is as much a cause for dismay as comfort.

A Fawn in the Wood

Long pause. John and Jane remain thunderstruck on the bed.

You slept with a man.

He was dressed in women’s clothes.

Is that supposed to make me feel better?

What was Duchess wearing when you made love to her?

Jane moves to get away from John.

Both remain on the bed.

Oh, John. What’s happened to us?

I don’t know who you are anymore.

I don’t know who I am anymore.

A FAWN IN THE WOOD

IF YOU WERE A FAWN IN THE WOOD

WOULD YOU FEAR ME

AS YOU PROBABLY SHOULD

OR COME NEAR ME

STILL BE DRAWN TO THE GOOD

WOULD YOU HEAR ME

HEAR THE TALE OF MY HEART

WOULD YOU FLEE WITH A START

ALL THE FAULTS I IMPART

MAYBE I’M A FAWN IN THE WOOD

WHAT YOU PROBABLY SHOULD

KNOW FOR ILL AND FOR GOOD

ALL THAT SCARES ME

ALL THAT DARES ME

NO MORE REASON TO HIDE

IF YOU SEE ME

ALL THE SECRETS INSIDE

WOULD YOU BE REELING

WOULD YOU FLEE FROM MY SIDE

GIVE ME A WARM EMBRACE

THE SMILE UPON YOUR FACE

THAT WE COULD NOT REPLACE

THAT WE WOULD SORELY MISS

FOR IT WOULD TRULY

I’M A BABE IN THE WOOD

I’M AFRAID IN THE WOOD

I WILL STAY, I’LL BE GOOD

I WON’T HURT YOU

I STILL LOVE YOU

I WILL LOVE YOU

PLEASE YOU MUST KNOW IT IS YOU

I WILL BE THERE FOR

I WON’T LEAVE YOU

FOR I LOVE YOU

The melody of “A Fawn in the Wood” mirrors the push me pull you clinginess and revulsion John and Jane feel, constantly alternating between notes that float consonantly and dissonantly over the underlying harmony.  (Like Carolyn Chrysalides’ soul-exposing “My Passion”, the song seems to fall into a place of musical timelessness, although what I hear as occasional, subtle Gershwin-esque flourishes tether it ever so lightly to the 1920s/1930’s.)  As if afraid of where the lovers will end up, the melody doesn’t dare resolve itself until after continual musical pulling and tugging.  Finally John and Jane both reach a mutual “love you”, although its unresolved chord and the offstage echo may sound as much like a question as a resolution.

But before Jane and John can deal with their situation any further, the rest of the world of their “dream” breaks in all around them.  The “Trial of the Tarts” is put in devastating motion, which in “Speakeasy’s” melange of Lewis Carroll and 1930’s history corresponds to a surreal court scene representing in Kafka-esque song and dance how the end of Prohibition and anti-homosexual State Liquor laws brought about the destruction of the queer speakeasy subculture of the 1920’s, followed by one of the worst decades of repression and isolation for American gay men and lesbians in the 20th century.

John and Jane mutely witness the psychic deconstruction and social debasement of their Wonderland friends and lovers Chet Cheshire, Julian Carnation and Duchess Bentley until, like Alice in both Wonderland books too, they rebel against all that “stuff and nonsense”, cause great farcical chaos, and a sudden waking up from the “dream”.

Jane wakes up at home.  John on the subway.  They don’t know whether their experience was real or “just” a dream, and they don’t know whether their spouse was actually part of it or not.  They reconnect in the “real world” warily.  All seems as they left it, and evidently their friends Roberta and Dean, who had figured prominently in the “dream”, don’t seem to know anything about “Wonderland”.  So why should their spouse?

But then alone, and in a moment of passion, they let slip something that they could only have heard in the dream, and that the other could only know about if they too had been there…

And suddenly the radio announces Chet Cheshire’s “brand new song”, one they shouldn’t have heard before, yet one they both danced to with Duchess and Julian during their mutual “dream”.

The song is “Dance into the Light“, in Act One Chet Cheshire’s invitation to dance in the Wonderland nightclub, and now at the end of the play, “Speakeasy’s” moral of love and understanding and honesty.

And John and Jane sing along with Chet, singing lyrics they could only know if they had both learned the song in their dream, when both learned how much more there is to know about themselves.

When they take over singing the song, it is as if the musical magical realism of the Wonderland has returned to John and Jane’s lives.  And so in song they reveal themselves and acknowledge the other.  Their sense of themselves, their sexual identities, and their understanding of their partner has expanded.  What this change will mean to their love, their future, is unclear, but they vow to “share freely”, to “speak easy” with another from now on.  Their relationship will change, and their marriage may or may not survive this change, but Jane and John promise, no matter what, to always love another.

Dance into the Light (Finale)

We see Chet ghostly in the Wonderland as he sings.

Jane moves towards radio to turn it off in a panic, but John gestures to “let it play”.  Both obviously recognize the song as the one they heard in their “dream” of Wonderland.

KEEP LEARNING TO PLAY YOUR PART

THE CORNERS THAT SHAPE YOUR HEART

MAY YOUR LOVE SONG BE ALWAYS TRUE

THE DANCEHALL WAITS FOR YOU

John and Jane sing along with the radio.

In doing so they acknowledge to each other that they both remember their mutual “dream”.

DANCE INTO THE LIGHT

SO BRIGHT ALL HURT MELTS AWAY

WITH LOVE ALL EMBRACING AND TRUE

AND START IT SINGING TODAY

THE MUSIC IS CALLING TO YOU

I WANT TO SPEAK EASY

LET LIGHT SHINE ONTO YOU AND ME

WHAT WE CAN BE

The Wonderlanders appear, surrounding the stage and audience.

DANCE INTO THE LIGHT TONIGHT

LET LOVE HAVE HER WAY

FOR LOVE SHOWS YOUR HEART WHAT TO DO

JOIN IN THE ROMANCE AND DANCE

OF LOVERS AT PLAY

THE MUSIC IS CALLING TO YOU

I DON’T WISH TO GRIEVE YOU

I DON’T WISH TO BREAK YOUR HEART

AND YET I MAY LEAVE YOU

AND YET WE MAY GROW APART

WHATEVER LOVE MAKES US

WHEREVER LIFE TAKES US

YOU KNOW I DO

Wonderlanders hum the first line of “Dance into the Light”.

PS:  You’ll notice that the lines near the end of the written lyrics, “whatever love makes us, wherever life takes us” are an improvement on those same lines as sung on the demo recording.