Posted on November 20, 2015 by dannyashkenasi

When I was researching Gay Culture of the 1920’s and 1930’s in preparation for writing “Speakeasy”, I came about an anecdote about a once famous female impersonator of the 1910’s and 1920’s, Julian Eltinge, a star of Vaudeville and the Broadway stage who in the 1930’s was reduced to performing in a small dive in L.A., in a tux, with the dresses he would be wearing in the act dangling from a hanger; the laws regarding cross-dressing had been sharpened, and it became illegal for a man to wear a dress even on stage as part of a theatrical performance.

The image of the once famous now brought low female impersonator, with his dress hanging limply from a hanger while he bravely tried to keep his act going, haunted me, and inspired the character of Julian Carnation in the musical Speakeasy.  Julian Carnation is part Lewis Carroll’s Red Queen (hence “Carnation”) from Through the Looking Glass, Mad Hatter from Alice’s Adventures in Wonderland, and Julian Eltinge from real life. 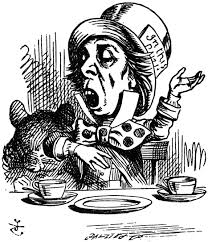 Except I discovered, a year later after a lot more research into pre-WW2 Queer history and slowly consolidating the various characters and story lines of “Speakeasy”, that I couldn’t remember where I had read that inspirational tidbit about Julian Eltinge.  For a couple panicked hours I poured through my notes and various history books, frightening myself that I may have imagined the incident and erroneously built a whole character and plot development around a fiction I only believed was history.

But luckily two short references on Eltinge did exist within the various history books I’d consulted; one about an arrested cross-dresser being described by the police officer on duty as being so believable he was a veritable Julian Eltinge, and another the reference to the performance in the drab L.A. club that inspired me in the first place.  I then found more detailed biographies on Julian Eltinge posted on line on various blogs.  But it did surprise me that a performer who was one of the biggest stars of his time could end up so forgotten that even history books about his time and about queer history in particular would have so little to say about Julian Eltinge.

Maybe that is because his sexuality is in question and thus so is his place in Queer history.  Julian Eltinge was by all accounts incredibly good at portraying women on stage.  Believable.  Entertaining.  He performed in Vaudeville, Broadway, London’s West End and in Silent Movies and became very wealthy.  However, unlike Julian Carnation in “Speakeasy”, Julian Eltinge, officially was straight.  Although believed to be homosexual by many of his peers in the theater, Eltinge aggressively asserted his heterosexuality with extended engagements to women (he would ultimately never marry) and (likely staged) bar fights (methinks the lady maybe doth protest too much?).  His personal life is shrouded in innuendo and speculation. 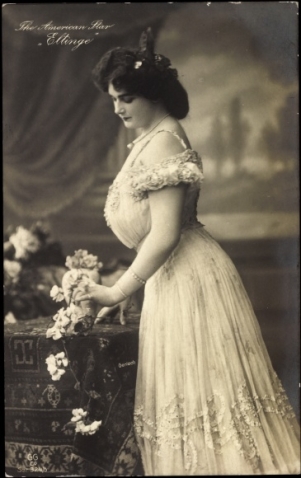 I believe he was a closeted homosexual.  He also appears to have been an alcoholic.  Perhaps not surprising, considering the many roles he was forced, or forced himself, to play: the perfect woman on stage, the macho man in public.  The real Julian Eltinge, the private man, there is no account of who that truly was.  By the 1930’s, in his 40s, he was overweight, broke, and dogged by rumors of alcoholism.  He died under unclear circumstances in 1941.  His death is variously attributed to liver disease or cerebral hemorrhage.

Although Julian Eltinge apparently kept his private desires fiercely closeted, no matter how flamboyant his professional persona, his counterpart in “Speakeasy”, Julian Carnation is open about his homosexuality and at ease with himself, the more to contrast with our hero John’s questioning, insecurity, and inability to face himself for all he may truly be. 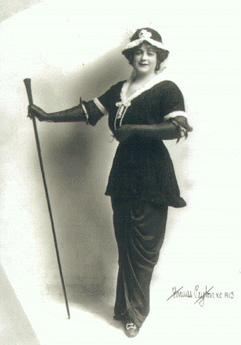 But in other respects Speakeasy’s Julian is much like the historical Julian.  A big star female impersonator on the stage, gorgeous in a gown, and ultimately faced with the destruction of his ability to perform as he would wish by the conservative backlash of the 1930’s.  In “Speakeasy” this is represented by the “Trial of the Tarts” – actual tarts in Lewis Carroll, metaphorical tarts, deviants, in “Speakeasy”.  Julian Carnation is stripped of his dress, put in a tux, and forced to perform as a safe, sexless crooner, while the dress is hanging away from him under armed guard.

But let’s not conclude this post with that image.  Let’s listen to a song from Act One of Speakeasy, where Julian and his florist friends extol the joys of putting on a gown and dancing in the big drag balls of Harlem. 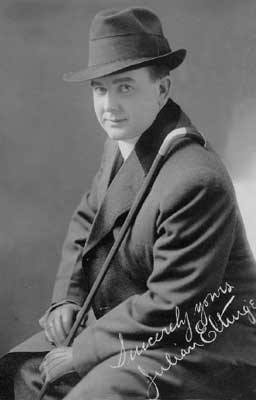