In Which I Complete the 30 DAY SONG CHALLENGE

Posted on July 6, 2017 by dannyashkenasi

Fun on Twitter.  Last month I took on the #30daysongchallenge.

The subject of one of this blog’s most widely read pieces:

I felt the need to add an explanatory tweet:

Maybe it’s because Margaret Rutherford’s Miss Marple reminds me of our housekeeper/babysitter/Grandma-substitute, Frau Borbonus, AKA Tatu, with whom I would happily watch all the 1960 Miss Marple movies on TV when I was a kid.  That certainly ups the nostalgia levels.  But listen to this music.  How can it not at least put a goofy smile on your face.  It makes me want to dance like a Peanuts cartoon.  On a musical side note, I love the way the strings and the harpsichord share the melody and obligato parts.  And those chirping flutes.  (This will someday get expanded to its own blog post.)

Theme from Miss Marple – Ron Goodwin and his Orchestra

I believe I once read somewhere that Kate Bush herself was not sure what the lyrics of “Love and Anger” meant.  If she did say that I wonder whether she was merely being coy.  I understood and related to every word.  At the time the song came out, its lyrics spoke spookily specifically to feelings and circumstances painfully specific to one very special relationship.  And that’s already more than I really care to say on that subject.

BERLIN WALL MEMORIES #2 – You Might as Well Have Told Me the Earth was Flat.

I really am bad with lyrics.  Melodies I’ll remember to thousands of songs, but the words? That’s where I struggle, even with songs I’ve written.  If I thought it through I could probably come up with a fair amount of songs I actually do know all the lyrics for, but the day I wrote that tweet I was drawing a lot of blanks, until finally I successfully tested myself on “True Colors”.  The other day I realize I also know all the words to “She Bop”. Must be something about Cyndi Lauper.

“Well I see him every night in tight blue jeans in the pages of a Blue Boy magazine….”

Sometimes when I can’t get to sleep because my brain won’t calm down or my husband is snoring, putting in the earbuds and listening to soothing music helps.  So I curated a special playlist called “Be Asleep” and Linda Ronstadt’s cover of the Beatles’ “Good Night” is indeed the first song listed.  The Beatles’ original version is on the list too of course. 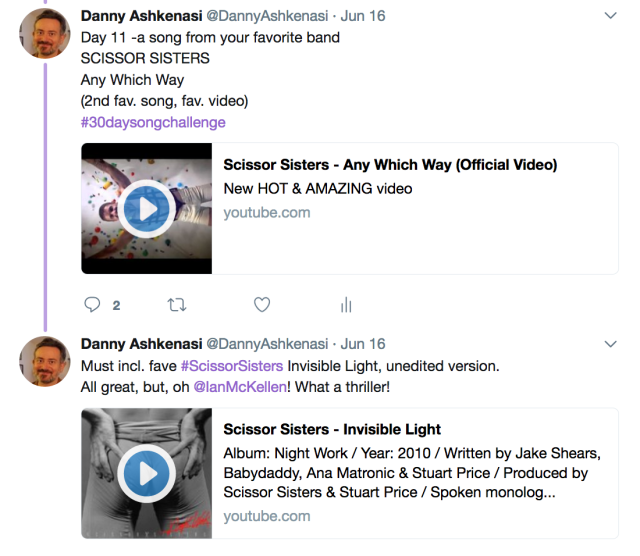 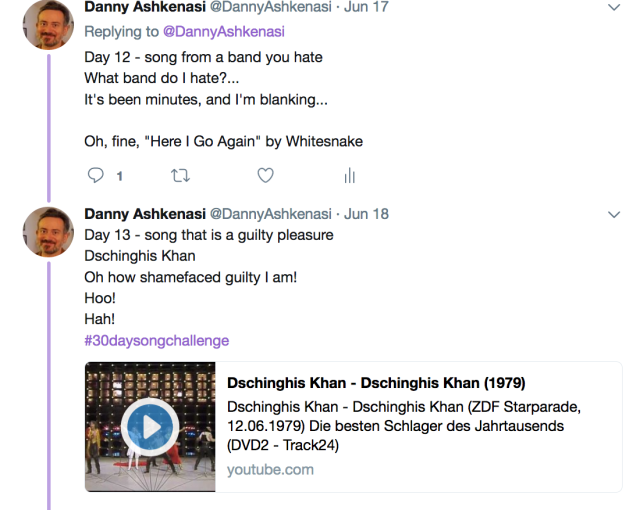 That’s what comes from growing up in Germany and, at the tender age of twelve, and, even though I was already listening to much cooler music like The Beatles and Blondie and Styx and Cat Stevens, nonetheless cheering on Germany’s up-to-that-date most popular near-winner in the Eurovision song competition.  And memorizing every lyric, including the one about Khan siring seven children in one night… Hoo!  Hah!

Arguably even more of a guilty pleasure for me is the 1977 Euro disco hit “Yes Sir, I Can Boogie”.  I get such a kick out of that tune, despite or maybe because of the awful heavily accented enunciation.  BOOO-GEE, BOOO-GEE VOOO-GEE aul nite loooong.  I assumed the singer was German, which endeared her breathily, pitchy off-kilter English to me. Turns out Baccara is a Spanish duo.  Ah well.

So it’s just as well I should I feel more guilty about “Dschinghis Khan”.

Yes Sir, I Can Boogie – Baccara

I think the title indicates the angelic/demonic nature of both the subject and the nature of the song.  Maybe someday someone other than Ed will hear it.  The surprising thing to me is I’d jokingly sung that tune once or twice to him, but have not for many many years.  I’m almost more shocked he remembers it, let alone chooses it to describe me (albeit in jest, right?  Right, Ed?).

I’m guessing I must have enjoyed “Itsy Bitsy Spider” as a kid.  I have a vague memory of singing it and doing the itsy bitsy gestures as a youngster and having a good time.  But now the thought of doing such a tune with the pre-schoolers or Kindergartners I teach fills me with revulsion.  Which is why I teach them Rodgers and Hammerstein or the Beatles or get them to compose their own damn tunes, all of which are more fun and artistically (and educationally) satisfying than itsy bitsy nursery tunes.

I used to depend on the radio for my pop music fix.  Back in the day when you could expect all the Billboard Top 40 songs of the day generally to be played on your typical Top 40 radio station.  Nowadays I depend on my shuffle function to pick its way through the approx. 10 000 tracks on my computer to give me my fix of variety and songs I like.  It’s an even greater diverse reach than Top 40 ever provided at any time.

Which means the music I listen to on the radio is whatever I hear on NPR.  Because public broadcasting is the only station I tune into nowadays on the radio.

A Day in the Life – The Beatles

But it really doesn’t work like that.  When I’m sad (or happy or angry) I don’t make a point of choosing any particular song and pressing “play”.  I may choose to play a certain song or certain series of songs out of a whim, and that whim may be influenced by the mood I’m in, but that whole process is a whole lot less deterministic and more subtle than these questions suggest.

From this Moment On – Ella Fitzgerald 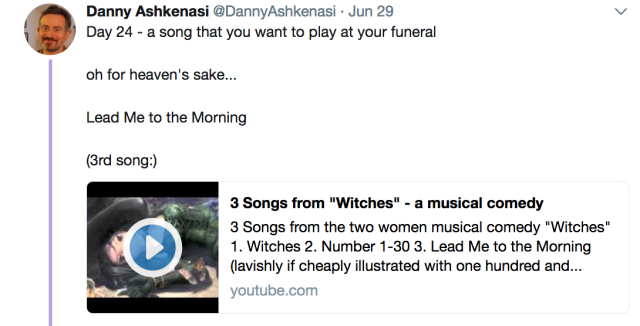 Lead me to the Morning – Danny Ashkenasi

Ten years of piano lessons better have provided me with that ability at least.

That makes for a fun party trick.

Like it so much I almost wrote a blog post all about it.  (Who knows, I may still do that…) 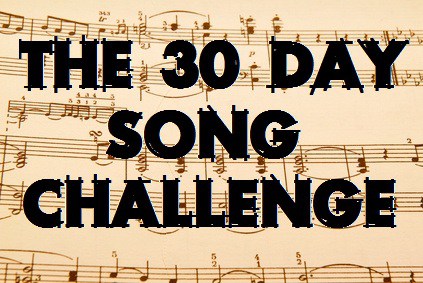