SPEAKEASY – Advice from a (Lesbian) Caterpillar

For many years I hoped to write a musical about the queer subculture of Roaring Twenties New York, but didn’t find my “in” until I came upon the idea of adapting Lewis Carroll’s two “Alice” books as a magical realist template for exploring that world.  Alice became a young newlywed couple, John and Jane Allison, with “Wonderland” inspiring Jane’s trip down the queer rabbit hole, and “Through the Looking Glass” pointing the way for John.

And so I began work on the musical I would eventually call Speakeasy (with various reworkings of the subtitle, currently settled on “John and Jane’s Adventures in the Wonderland”).  Yet before I made any decisions on story, characters, songs, I needed to immerse myself in the little known history of LGBTQ life in the 1920’s and 1930’s.  I spent a year just doing research, and learned an awful lot about the social and sexual mores of the era as well as its (in)famous queer cultural provocateurs.  Much of this research made its way through a magical realist Carrollesque lens into the musical (and much of which has already been discussed in this blog).

Sometimes this research took me into even earlier times, for need of greater context.  Which is how I learned about the “female friendships” of the 19th century.  These would be intense relationships between two women, in school or college, that could be as deeply bonded as any traditionally romantic or familial bond.  Publicly these “female friendships” could exhibit all the hallmarks of romance: physical affection, love letters, lavishing gifts on another, intense jealousies, sharing beds, displays of devastating heartbreak when relationships dissolved.  Society approved and encouraged these “female friendships” as a way for young women to exercise romantic proclivities within the safety of sorority, away from male temptation. That these friendships could become sexual was not imagined.  That doesn’t mean however that some of these female friendships didn’t become sexual.

Times were different in the 1800’s.  Men sharing beds with men and women sharing beds with women was common.  The terms heterosexual and homosexual weren’t even coined until the end of the 19th century.  But once coined, their usage and the greater awareness of homosexual identity and activity seeped into society by the early 20th century. Intense “female friendships”, as practiced and encouraged in middle class society in the 19th century, now became tainted and suspect.  Suspicion and fear of lesbianism made something once deemed a normal rite of passage for young women now appear unhealthy and dangerous.

So by the 1920’s the practice of these intensely bonded “female friendships” was long in the past.  But I imagined a society lady old enough to have experienced it in her youth; a conservative, closeted middle age woman, so frightened of her own lesbianism that she remains consciously wholly unaware of it.  She would look back on her girlhood friendship as an ideal she could cling to while the cultural and sexual revolutions of the Roaring Twenties rage around her, confusing her with possibilities she has denied herself, while idealizing a past relationship she refuses to examine close enough to see it for all it truly is. 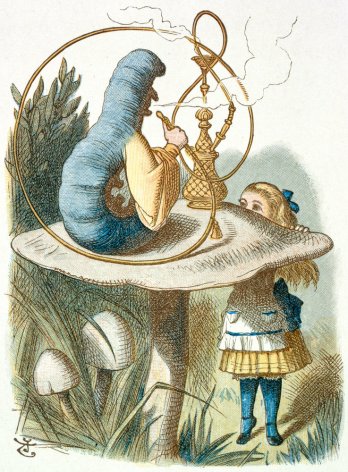 Alice and the Caterpillar

For the historical aspects of “Speakeasy” she would stand in for both the influential high society ladies that helped usher in Prohibition and also later helped dismantle it when it became clear that the social ills of Prohibition were overwhelming any social good originally intended by its enacting (Prohibition and its end had profound effects on the rise and fall of 1920s/1930s queer culture, a reality I felt I needed to thread into “Speakeasy’s” narrative).  As regards to “Alice in Wonderland”, the character of the society lady would easily intersect with the Queen of Hearts in the dramatic end of the story (personifying the reactionary forces that clamped down on the free-wheeling Speakeasy culture or the Roaring Twenties).  But when Jane Allison first meets her, the society lady will intersect with the Caterpillar (who book Alice encounters in the chapter “Advice from a Caterpillar”).  And so I named the her Caroline Chrysalides.

Chrysalides is an obvious reference to the butterfly that Caroline would become if only she burst through that massive cocoon she built around her soul, and came out as the fabulous lesbian butterfly she could be.  I liked that the Caterpillar in “Alice in Wonderland” imperiously insists that Alice explain who she is, just at a time when Alice has gone through so many disorienting changes she is unsure that she can “explain herself”.  There is delicious irony to transposing that conversation to Caroline Chrysalides chastising Jane on her equally currently unsteady sense of identity, when Caroline’s own true self is so woefully closeted. 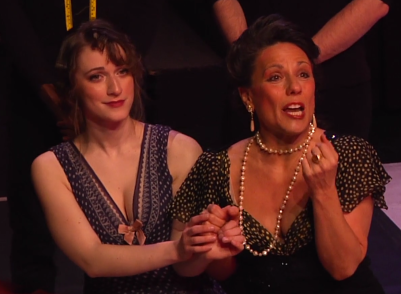 Jane reminds Caroline of the “steady, simple girls” of her youth, so unlike the contemporary “jazzers” and “flappers” that scandalize her with their loose morals. Which leads Caroline to sing “Once I Had a Friend”, decrying the girls of today and extolling the female friendships of her youth. In song she is supported by her three attendants: a hairdresser, a tailor and a secretary (played by the same performers who we previously saw as the gay florists), who likely have a greater appreciation of the Jazz Age and the hidden, true extent of Caroline Chrysalides feelings about her girlhood friend than the protesting lady would ever consciously admit).

Once I Had a Friend

THEY RUN AND THEY STRAY

FROM NIGHTCLUBS TO BARS AND SALOONS

IN MY DAY YOUNG GIRLS

TO TELL YOU THE TRUTH

MY SWEET BIRD OF YOUTH

WAS AN AGE THAT PASSED FAR TOO SOON

AH, THOSE DEAR DAYS OF OLD

ERE THE WORLD GREW SO COLD

I SPENT WITH MY DEAR, DARLING FRIEND

WE WERE STEADY AND SWEET

BUT SCHOOLGIRL DAYS CAME TO AN END

THEN WE TOOK A NEW LIFE

AS A MOTHER AND WIFE

GAVE A SIGH AND WAVED THOSE DAYS GOOD-BYE

AND WHEN IT WAS SPRING

SUCH SWEET AFTERNOONS WE WOULD SPEND

AND OUR EYES WOULD SHINE

WHILE HER HAND HELD MINE

MAY THE SPRING IN OUR HEARTS NEVER END

THE WORLD MOVES SO FAST

THE PAST IS SOON PASSED

THE GIRLS OF MY YOUTH ARE NO MORE

BY FLAPPERS AND JAZZERS GALORE!

AND I SHUDDER WHAT MORE’S IN STORE

SO THE SWELLS ARE IMPRESSED

HAIR CUT DOWN TO A BOB

THE LOOK OF THE WILD WANTON SORT

IT’S ALL GONE FAR TOO FAR

AND WHEN IT WAS SPRING

SUCH SWEET AFTERNOONS WE WOULD SPEND

BUT THE DAYS WILL FLY

AND THE WORLD GOES BY

AS THE SPRING TOWARD AUTUMN DESCENDS

AND OUR HEARTS MAY SIGH

AS THE SEASONS DIE

BUT THE SPRING WE RECALL DOES NOT END

AND OUR EYES WOULD SHINE

WHILE HER HAND HELD MINE

MAY THE SPRING IN OUR HEARTS NEVER END

MAY OUR SPRINGTIME NEVER END

This is how Jane discovers Caroline Chrysalides in the early dreamscape wanderings of “Speakeasy”.  Much later there is a moment where John and Jane Allison go to sleep; and what does it mean when protagonists, who may just be dreaming everything we are seeing, might now be dreaming that they’re sleeping?  In this likely dream within a dream, it may be possible to travel deep into Caroline Chrysalides’ subconscious, where she gives voice to “My Passion”.

And so here we hear how Caroline Chrysalides keeps her passion, her light, her love, her true self encased within herself, never to be revealed.  Who the “you” is that her passion cries for is not named.  But we can guess.

AND WAITS IN SILENT SOLITUDE

THE UNSEEN LIGHT ENCASED IN ME

SUSTAINED TO SERVE ONE NAME

THAT SETS IT FREE

A THOUSAND STRANGERS’ SOULS MAY BURN BESIDE ME

THEY’LL NEVER KNOW THE FIRE BORN INSIDE ME

ONLY ONE SOUL AND ONE ALONE CAN

RELEASE THE LOVE I HIDE

IN TIME I MAY DESCEND

MY HOPE AND STRENGTH MAY FADE AWAY

MY BODY’S LIFE WILL END

MY LOVE SHALL STAY

THOUGH I MAY DIE WITHOUT TRUE LOVE’S SALVATION

I WON’T LET ANY OTHER KNOW MY PASSION

I’D RATHER LET IT PASS UNNOTICED

THAN TAINT THE LOVE INSIDE

AND CRIES FOR YOU

AND TRIES FOR YOU

WHILE ALL ALONE IT WAITS FOR YOU

PS:  Between the recording of the demo and the performance in the workshop last year I changed one word in the lyric, as you may have noticed if you read and listened simultaneously.

“A thousand strangers’ souls may burn beside me” has replaced “lie beside me”.  Which is a much better choice lyrically for Caroline, emphasizing the metaphor and removing potential literal misunderstanding about actual thousands physically lying beside her.  It just took me a long time to figure out the best replacement word.  On the one hand I am using “burn” a second time in the song, but that also helps connects “souls” to “passion”. And I like the way “burn” becomes “born” in the musically equivalent spot of the following line.