As Seen from the Magnificent Painted Hills, Oregon

We left Redmond, Oregon, at 7:15am.  Madras, just north of Redmond, would be smack in the path of totality, but we decided to experience the total eclipse further east at Painted Hills, Oregon.  Because it promised to be an extra special staging ground for the magnificent event.  In the 90 minutes it took us to drive to Painted Hills, I entertained my eclipse companions with all the eclipse themed music I could find on my Ipod, the highlights of which I will include here too, starting with the obvious and undeniable: 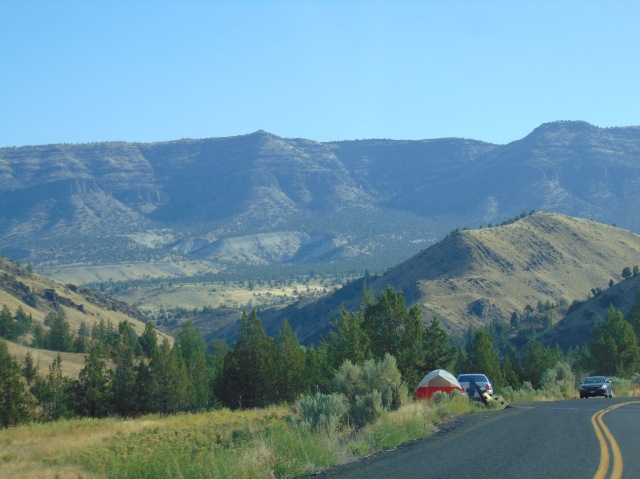 Everywhere along the side of the road, people were setting up camp to watch the coming celestial event.

Eventually we got to Painted Hills…

Thousands were already parking on the side of the access road to the park.  We still found a spot in the official parking lot.

Ed and I making our way to the Painted Hills, joined by many other eclipse enthusiasts, some with especially made t-shirts. 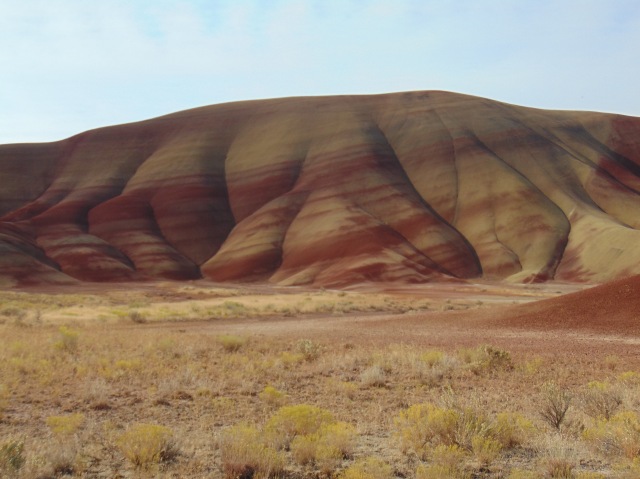 Shortly after 9am, the moon started making its way in front of the sun. 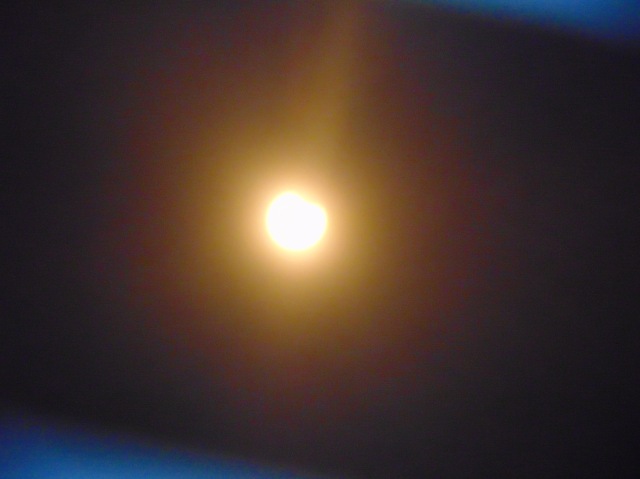 Everyone has their cameras trained at the sun.  But there’s the spectacular vista of the Painted Hills all around for the picture taking too.

We decided we would watch the main event from that hill up high:

The view from up there:

I used the cheaper paper framed eclipse glasses at the left to cover my camera lens when taking pictures of the sun.  The more fancy magnifying eclipse glasses to the right covered my eyes. 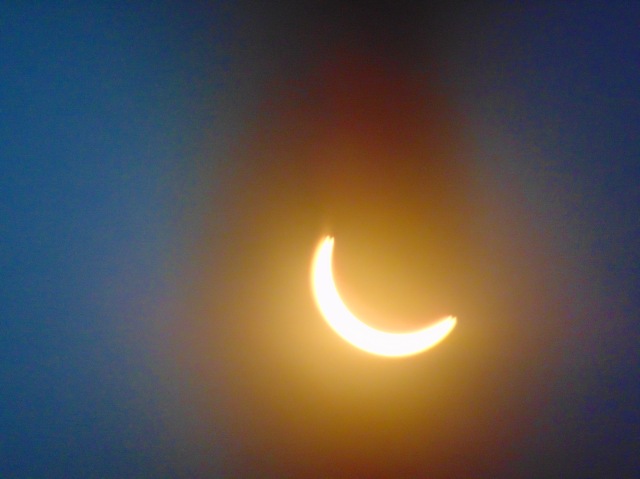 Man on the Moon – REM

As we got closer to total occlusion, our shadows started getting fuzzy:

And it got cooler, and darker: 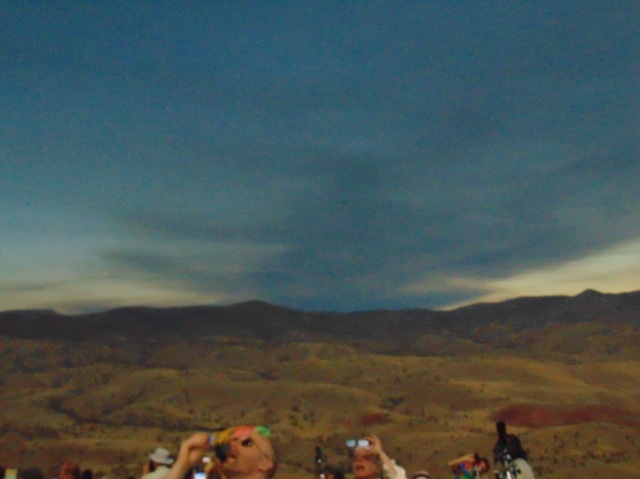 And then – Total Eclipse!

It got very dark.

We could see Venus in the sky.  But unfortunately a thin haze from wild fires prevented us from seeing Mercury and other planets or stars.

Finally, right after total occlusion, a Diamond Ring appeared, when some sunlight burst through a crater on the moon just as the moon disk started moving away from the sun:

The sun was coming back again, slowly but surely. 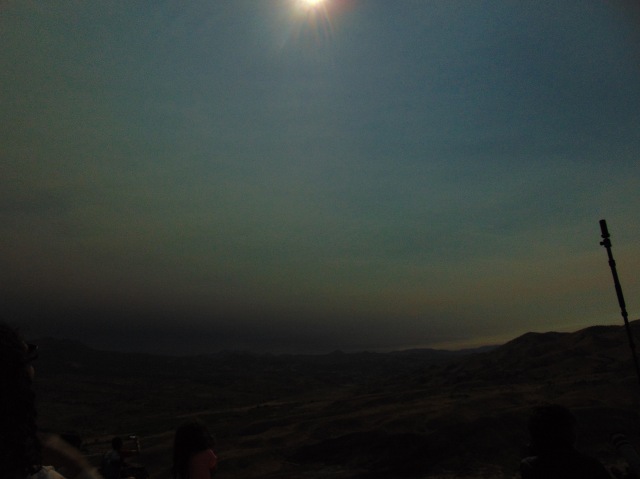 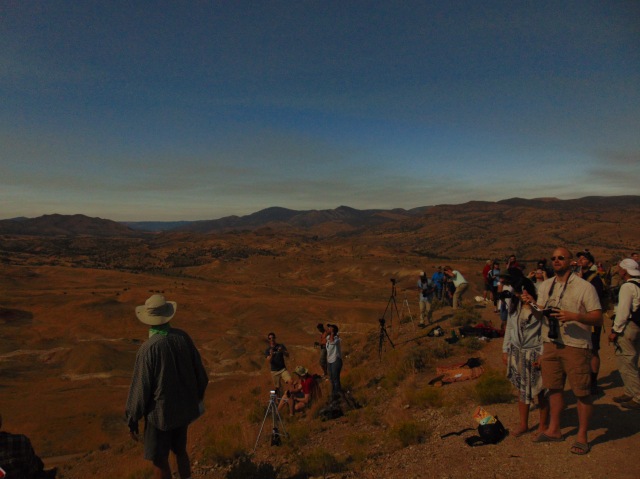 Even though only a sliver of sunlight was spilling over the moon, it still made for a bright impression in the sky for my camera (but dim enough to be camera safe): 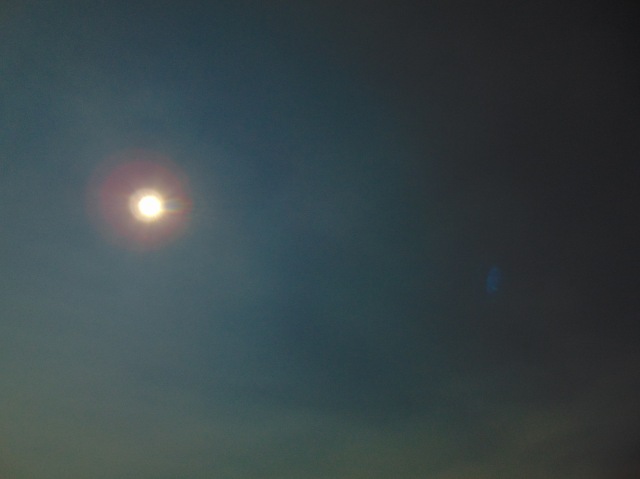 The Flesh Failures (Let the Sunshine In) – from HAIR

Above, a jet plane flies under the sun just as it slowly appears out of totality. 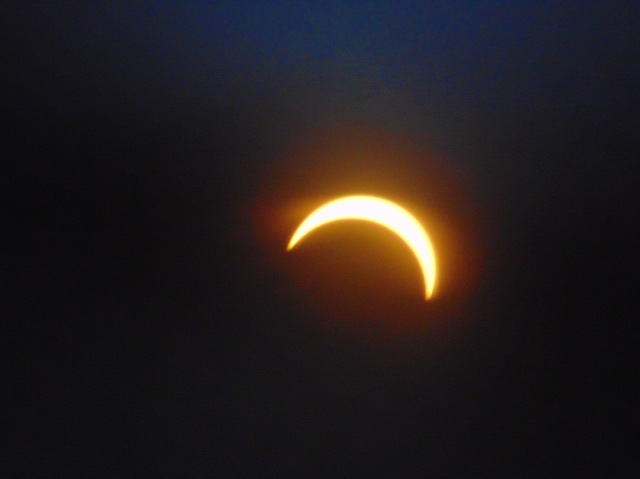 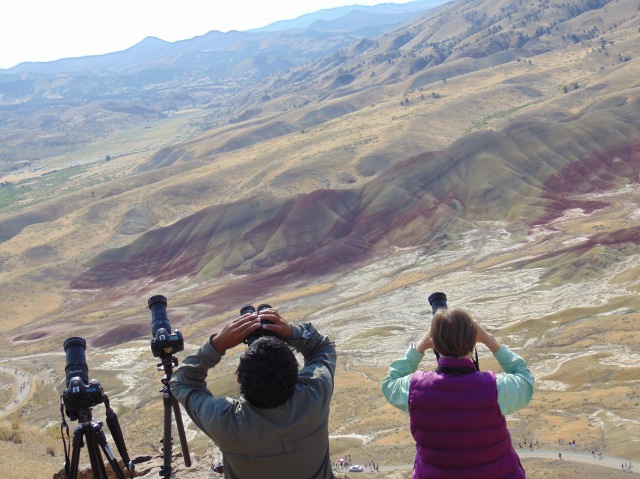 In the Sun – Blondie 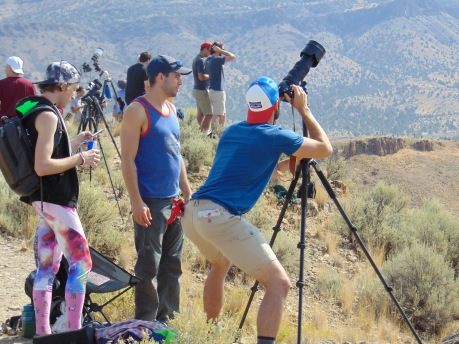 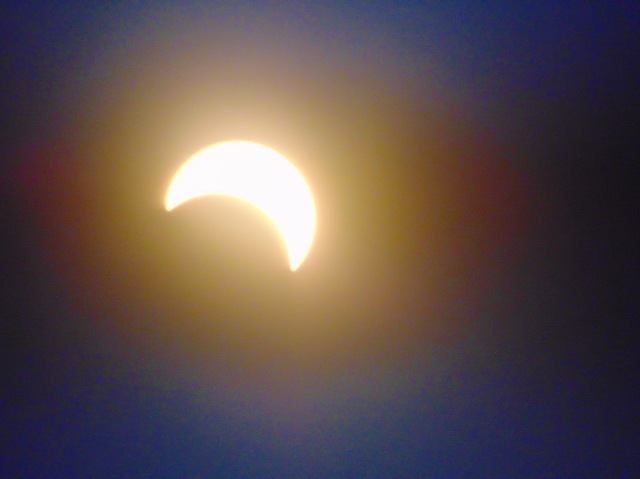 As the moon slowly started uncovering the sun over the next 70 minutes, the first throngs started leaving the Painted Hills.  But we lingered. 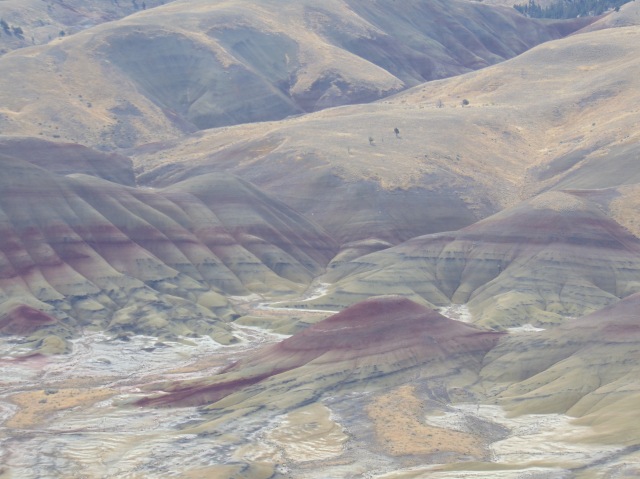 Sunrise Sunset – from Fiddler on the Roof 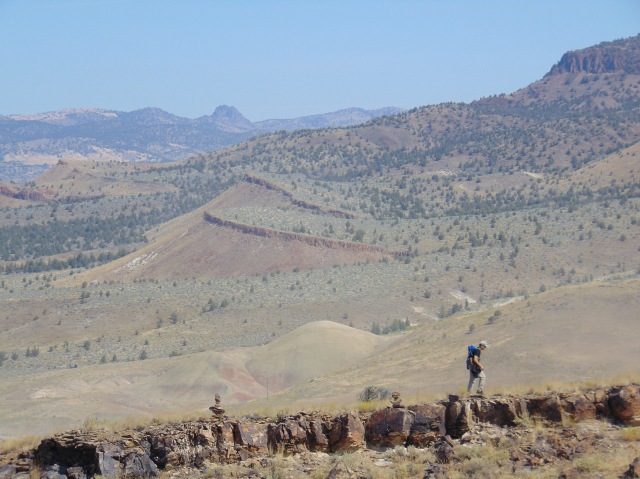 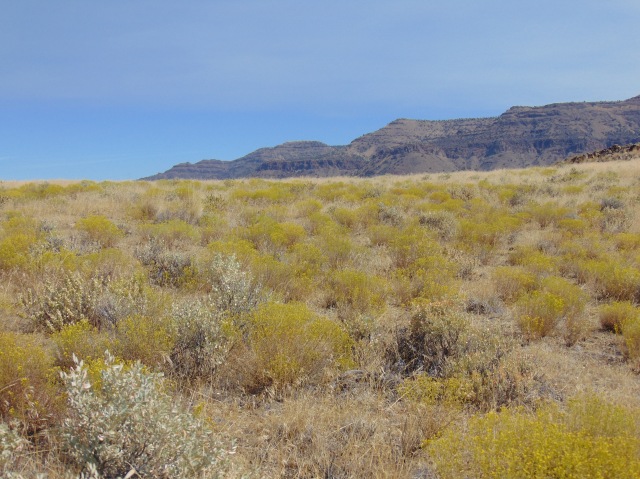 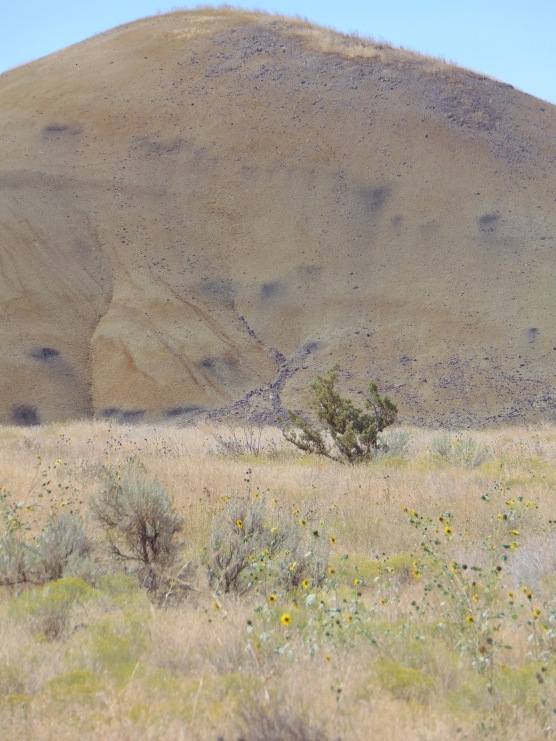 Small desert sunflowers.  I had never seen these before.

By the time we left Painted Hills, the moon had finally fully released the sun.

Now might be a good time to admit that the cardboard eclipse glasses made for a rather unreliable makeshift lens cover for my camera, resulting in some interesting photographic oddities and failures as I tried to safely zoom into the moon occluded sun.  Here is a photomosaic of them all: 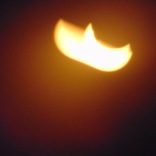 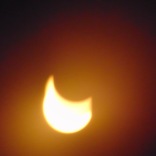 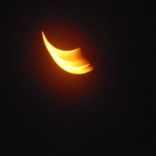 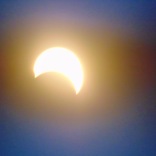 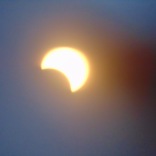 After we left Painted Hills, we drove further East to see some more of the grandeur or mid-Oregon.

Another Day of Sun – from La La Land 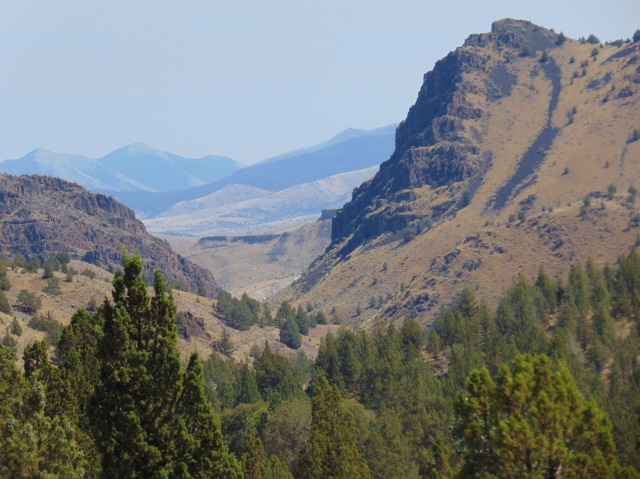 Including this highway surprise – the “Shoe Tree”: 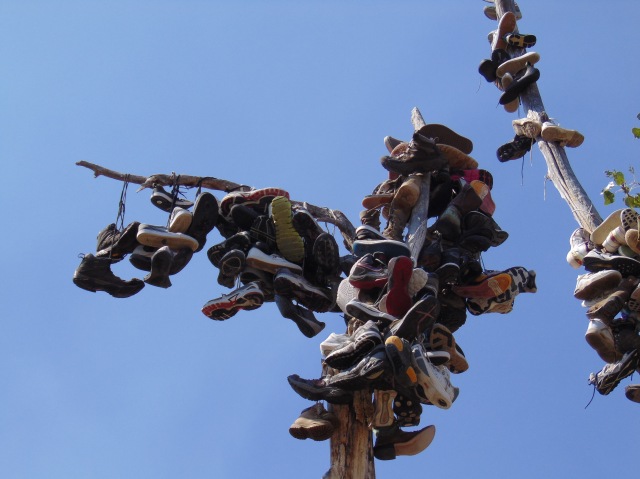 We drove back to our home base in Redmond listening to Pink Floyd’s “The Dark Side of the Moon”, of course.  I can’t share the whole album here, that would be too much, even for me.  But I will share the two most obviously salient tracks for today:

The Great Gig in the Sky – Pink Floyd