SONGS to RING IN the NUCLEAR APOCALYPSE

So let’s replay some golden oldies of the atomic age!

Stanley Kubrick’s Cold War satire “Dr. Strangelove or How I learned to Stop Worrying and Love the Bomb” famously ends with nuclear armageddon being rung in to the strains of “We’ll meet again, don’t know where, don’t know when”.  Ever since the movie’s release that warm World War Two era chestnut has taken on an additional tinge of Cold War cool.

But what of songs that dealt with nuclear war directly, from their inception?  Now that the narcissistic blustering of two Dear Leaders with the impulse control of toddlers (minus toddlers’ instincts for empathy) have quickly resurrected the specter of imminent nuclear confrontation that we all thought had faded since 1989, perhaps it would be fun (fun???) to revisit some of the pop music classics of nuclear annihilation.

I must start with two classics of comedy songs, both from Tom Lehrer, who twinklingly skewered 1950’s and 1960’s society as America’s premiere lounge singer court jester.  “So Long, Mom” perfectly transplants the “Over There” jingoism and “Send a salami to your boy in the army” boosterism of WW1 and WW2 into the era of WW3 (an era which will last only 90 minutes).  Its musical sibling is the even blacker humored “survival revival hymn”: “We Will All Go Together When We Go”:

We Will All Go Together When We Go – Tom Lehrer

Kate Bush in the “Breathing” video

For some reason, the 1970’s produced almost no songs about nuclear war.  But moving into the 1980s we find many popular songs that treat nuclear war in all earnestness.  The perhaps lyrically and musically most successful, and devastating, is Kate Bush’s epic “Breathing”, which evokes an apocalyptic landscape of doomed survivors, including a fetus inside its mother’s womb, breathing in the fall-out of a nuclear winter. 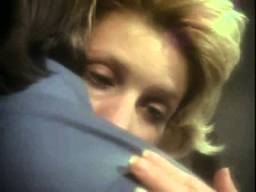 Clip from the “Dancing…” video

Also deadly earnest, but set to a bopping beat, Ultravox’s “Dancing with Tears in My Eyes” recounts the melodramatic tale of a man hearing on the car radio that nuclear war is imminent and racing home to make love to his wife one last time.  Yep, we danced to this in the 1980’s.  Fun times at the disco!

Dancing with Tears in My Eyes – Ultravox 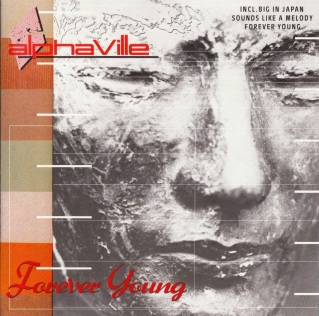 The 1980s produced quite a number of songs about or referencing nuclear war. Sting memorably incorporates a theme by Prokofiev in his critique of Cold War policies: “Russians”.  And Frankie Goes to Hollywood’s “Two Tribes”  and Timbuk 3’s “The Future’s So Bright, I Gotta Wear Shades” at the very least deserve special mentions in this piece.  But when I think of the pop songs that in hindsight most lastingly have come to stand in for the nuclear anxieties of the 1980s, it is two international evergreens that treat the issue more indirectly, both coincidentally recorded by German bands.  Or perhaps it is not a coincidence, since the divided Germanys of the ’80s, each with thousands of ballistic missiles planted on their soil by superpowers aiming at their Cold War adversary, were acutely aware that in the event of a nuclear conflagration, their region of Europe would be the first to be annihilated, and that many times over.

First Alphaville’s “Forever Young”, a modest hit upon release, which over the years has become a universally recognized anthem of youthful hopes and fears.  Only one lyric early on in the song addresses WW3 directly:

Heaven can wait, we’re only watching the skies
Hoping for the best but expecting the worst
Are you going to drop the bomb or not?

But it’s this lyric that haunts the rest of the song and has made it a quietly potent anthem for generations growing up under the cloud of nuclear anxiety. 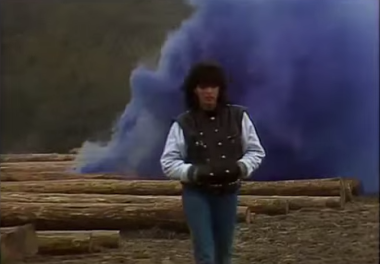 The second is Nena’s “99 Luftballons”, the most enduringly popular pop song in the German language.  It doesn’t specifically mention nuclear bombs, but nonetheless more than any other pop song has become emblematic of 1980s nuclear anxieties.  The lyrics are deliberately naive, written in the style of a children’s picture book, recounting the tale of 99 balloons alarming 99 jet plane pilots and 99 ministers of war to wage a 99 year war.  At the end of the song the singer wanders through a the world left in rubble and ashes; she finds a solitary balloon, thinks of “you” and lets it fly.

An English language version, “99 Red Balloons”, was released.  But let’s just say a lot got lost in translation; US radio stations back in the day preferred playing the original, and that is the version that prevails:

The final song I will include to ring in the new nuclear era is another 1980’s disco hit, Blondie’s “Atomic”.  I mean, how could I not include a song called “Atomic”?  It is mostly an instrumental piece, with the instrumental section sounding dystopian enough to passably evoke nuclear nightmares.  But when the vocals chime in, it appears that the only thing atomic about “Atomic” is Debbie Harry’s orgasm at the hand of her lover who’s “hair is beautiful, aaaah, tonight”.

Ah, well, I’d rather dream of his beautiful hair than of atomic mushrooms bursting at the horizon outside my bedroom window.  I had enough of those nightmares as a kid growing up in West-Berlin.  I thought that era was over.

And now we come full circle with the nuclear terror comedy songs.  A day after I originally posted this, John Oliver did a brilliant deep dive into North Korea on his HBO news satire show “Last Week Tonight”.  And had a surprise for the audience at the end:  Parody Pop-smith Weird Al Jankovic singing a new original “Please Don’t Nuke Us, North Korea”, very much in the spirit of Tom Lehrer.  If you just want to hear the song, it comes in near the 24:30 minute mark.  Enjoy!

2 Responses to SONGS to RING IN the NUCLEAR APOCALYPSE