Theme from Miss Marple – Ron Goodwin and his Orchestra

A while back I promised there would be a series of Happy Tunes for Dark Times to highlight what I consider sure fire musical mood boosters.

What with ever escalation Twitter Tantrums, continued government sanctioned child kidnapping, greater environmental desecrations, ever more obvious indicators of treason, the slow steady erosion of democracy and and and devolving unabated, it might be excused that I have taken this long to muster the will for a second installment of “Happy Tunes” (or it might rather be emphasized what have I been waiting for dammit?!?), although my Mamma Mia-post(s) might rightly be seen as the actual second installment.

Anyway, today I want to share what to me is the number one unassailable Happiest Tune on Earth.  The Theme Song for the 1960’s Miss Marple movies starring Margaret Rutherford.  More than any other piece of music, this one has the power to ALWAYS make me feel chipper and invariably want to dance some sort of happy dance. 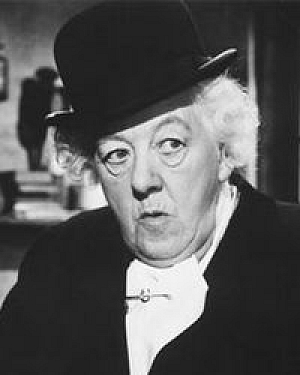 Those bright strings!  That jaunty harpsichord!  Those chirping flutes!  It’s all so very cheery and 1960s and English and the perfect theme song for the merry murder sleuthing of the Miss Marple movies.

I particularly enjoy how the strings and the harpsichord keep exchanging places as lead melody and echoing obligatos in both the main theme and the bridge sections of the piece.  When I am moved to do a little happy dance to this music, I can’t help but mime playing the harpsichord, at whatever angle my hand just happens to be at the moment.

The joyous nature of the piece truly can’t be denied, yet I should possibly concede that it being my absolute favorite #1 mood picker upper may not be a just about musical momentum but also may have a little something to do with a deeply anchored personal connection to my childhood.  But isn’t that the way dearly treasured art tends to work for us mere mortals?

The Miss Marple movies were a staple on German TV when I was a child growing up in Berlin, and I often watched them with Tatu when she would babysit me when my parents were out.  Tatu’s real name was Tante Buschi, well actually it was Frau Borbonus (I’ll explain in a moment), and she was the woman my parents hired to help keep the house, and when necessary babysit my brother and me.  In many ways she was a third grandmother to me, one I spent much more time with than my actual grandmothers who lived in the United States.  My brother David was two and I not even a thought when she joined the family.  He had trouble pronouncing the name Frau Borbonus and called her Tante Buschi (Aunt Bushie).  Three years later I was born, and my one year old attempts at speech shortened Tante Buschi to Tatu.  From then on Tatu is what the family called her even when David and I were deep into our adult years. 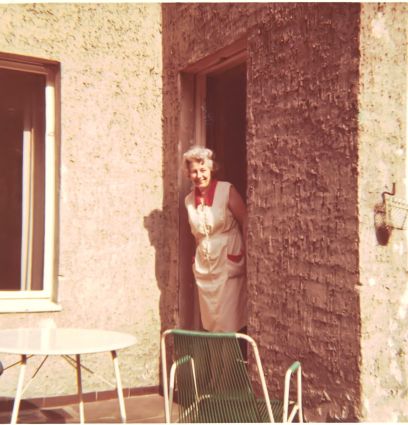 During some of our babysitting evenings together we eventually watched all of the four Miss Marple movies together.  They are truly delightful family friendly murder mysteries, and Margaret Rutherford as Miss Marple – though apparently not thought by Agatha Christie to be much like the Miss Marple of her books – is a total delight.  Quirky, clever, resourceful, indomitable, an unlikely unforgettable heroine.   She also reminds me somewhat of Tatu herself, which endears her and the movies to me even more.  And helps explain why I might like the Miss Marple theme song so very much.

That said, let me extol its musical pleasures some more.  The jaunty melody with the baroque curlicues, the way the strings repeat the main theme in harmony a third higher, the harpsichord asides, later the string asides when the harpsichord takes on the main theme with those same baroque curlicues and added thirds, the bouncy syncopation and upward hiccuping runs of the bridge theme, those goofy double flute hippityhops, to say nothing of the oh so hip but now square 1960s percussion and bass and guitar arrangements.  How can it not put a smile on your face?

It certainly puts a happy smile on mine.

As do memories of Tatu and Margaret Rutherford. 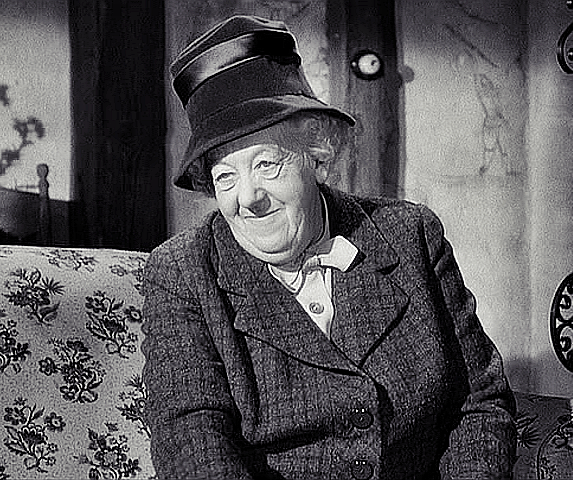