The Inspiration for SPEAKEASY’S DUCHESS BENTLEY – The Terrific, Trangressive and Tragic Tale of Gladys Bentley – Part 1

Posted on March 2, 2016 by dannyashkenasi 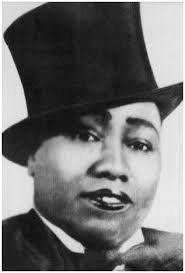 In the musical Speakeasy – John and Jane’s Adventures in the Wonderland, Jane Allison first meets Duchess Bentley, Harlem nightclub singer and unabashed lesbian, when she finds herself outside a door being angrily knocked upon by Minister Fish, who implores Duchess Bentley to let him in so he may persuade her to amend her wicked ways.  Meanwhile, inside, Duchess is dodging the temper tantrum and flung food and dishes hurled by Jane’s neighbor Roberta White, who is livid to have learned she is not alone in being the recipient of Duchess’ amorous attentions.

The scene parallels the “Pig and Pepper” chapter in Lewis Carroll’s Alice’ Adventures in Wonderland, only there Alice comes upon a Fish footman outside the door of the Duchess, who is dodging saucepans and dishes flung by an irate cook.  (The Cheshire Cat makes his first appearance in this chapter too, and on stage this is also where Jane Allison meets Chet Cheshire in person for the first time.)

Minister Fish, in addition to Carroll’s Fish Footman, is also based on Reverend Adam Clayton Powell, a prominent Harlem pastor who in the 1920’s railed against “moral degenerates”, claiming that sexual perversion among women had “grown to one of the most horrible, debasing, alarming and damning vices of present day civilization”.  Roberta White, who is taking the Cook’s place in dish throwing outrage, is based on the White Rabbit, as well as the many flappers and jazzers of the Roaring Twenties who perhaps partook in more than they could handle socially and sexually.  (Chet Cheshire is based in part on Pansy Craze entertainer Gene Malin).

Duchess Bentley takes her Carrollesque cues from Alice ‘s Adventures in Wonderland’s Duchess and Through the Looking Glass’ Humpty Dumpty for the most part.  More importantly the character derives her historical inspiration from notorious, fabulous, and ultimately doomed Harlem nightclub singer Gladys Bentley.

“Get a whiff” of her daring, as channeled through Duchess’ verse and chorus in Speakeasy’s song “Swell”, the second part of which is included here (she shares the song with Julian Carnation and Chet Cheshire):

The Roaring Twenties was a time, sometimes referred to as the First Sexual Revolution, where old fashioned sexual mores were challenged.  During Prohibition homosexual and bisexual culture flourished within the world of illegal speakeasies and the Harlem Renaissance.  Even so, Gladys Bentley’s openness about her lesbianism was radical, and for a long time made her a very popular singer, first in rent parties and buffet flats, then various Harlem dives and Speakeasies, and finally as a headliner in the Ubangi Club.  She would sing raunchy parodies of popular songs, rewriting love songs to be about browning (anal sex), for example, as well as openly flirting with the women in the audience.  She even bragged to a gossip columnist about marrying a white socialite in a ceremony in Atlantic City. 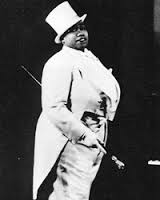 At the height of her fame she lived in a Park Avenue apartment, had servants and a swanky car, and was famous for her string of glamorous girlfriends.  However the repeal of Prohibition put an end to the prominence of the Harlem hang-outs that once employed her.  One price for legalizing alcohol and allowing public establishments to openly serve liquor was the threat of having one’s liquor license revoked if one even unwittingly allowed a homosexual on the premises.  Gladys Bentley quickly found she could not work in New York anymore.  She moved to California and managed to keep performing for a while, but kept getting into trouble with the law for wearing her signature male suits.

By the late 1940’s Gladys Bentley was broke, had no work prospects and faced homophobia grown even more powerfully virulent by anti-communist Cold War fear mongering.  It would lead her to an act of great desperation and tragic self-abnegation.  But I will talk about that in Part 2.

I’ll end this post with the song “Out of Sight”, which is sung during the “Trial of the Tarts” section of Speakeasy, a scene mirroring the Trial scene of Alice’s Adventures in Wonderland as well as the reactionary forces that took over America during the Great Depression, leading to the end of the careers of many homosexual performers.

Duchess’ description of her childhood in the lyrics is based closely on her Gladys Bentley’s own reminiscences: “From the time I can remember anything, even as I was toddling, I never wanted a man to touch me…Soon I began to feel more comfortable in boys clothes than in dresses”.

Out of Sight (demo recording)

Duchess Bentley (Camille Atkinson) at the end of “Out of Sight”

AT MY TOMBOY POSE

IN MY BROTHER’S CLOTHES

WHAT’S UP WITH THIS CHILD?

FAR TOO BOLD AND WILD

LORD, THAT CAN’T BE

Lord, what is that child wearing!

No. You can’t play with us.

Get down from that tree.

You ain’t no boy.

You’re not going to church like that. Put on your dress!

YEARS OF GUFFAWS AND CHIDING

ONCE PUT MY SOUL IN HIDING

BUT I WILL BE THE ME I GOT TO BE

MY LIFE IS MY ADVENTURE

AND I WILL LIVE IT FOR THE WORLD TO SEE

Honey, you are too much, even for here.

(wolf whistle) Hey you, whatcha got in those trousers?

You got moxy. We’ll start you off weekday nights. See how you hit with the crowd.

I WON’T BE OUT OF SIGHT NO MORE

WON’T FADE INTO THE NIGHT NO MORE

I WON’T BE OUT OF SIGHT FOR YOU

THE GLORY THAT’S ME

I WON’T BE KEPT DOWN

BIG GAL IN A SUIT

I’LL BE A BIG OLD SIGHT FOR SURE

WILL STEP OUT BOLD AND BRIGHT FOR SURE

WILL HOLD MY HEAD UP HIGH ALRIGHT

I WON’T GO AWAY

WHAT IS THIS AWFUL SIGHT

WHAT FILLS OUR EYES WITH FRIGHT

I AM YOUR DAME TONIGHT

I DON’T GIVE A DAMN

WHAT STRANGER IS THIS

WHAT DANGER TO US

THIS IS ME NOW

WHAT STRANGER IS THIS

LET ME BE NOW

WHAT DANGER TO US

I AM FREE NOW

SHE MUST GET OUT OF SIGHT FOR GOOD

RETREAT INTO THE NIGHT FOR GOOD

SHE’S WALKING OUT OF BOUNDS, MY DEAR

SHE’S OUT ON SHAKY GROUND, I FEAR

Duchess is surrounded by the righteous mob.

OUT LOOSE IN THE STREET

BRING THE CLUB DOWN

SHUT THE CLUBS DOWN

YOU SHALL BE OUT OF SIGHT FOR GOOD

BE DRUMMED OUT IN THE NIGHT FOR GOOD

YOU SHALL BE OUT OF SIGHT FOR GOOD

BE SHUNNED BY ALL THAT’S RIGHT FOR GOOD

I WILL BE OUT OF SIGHT

AND FADE INTO THE NIGHT

SHE SHALL BE OUT OF SIGHT FOR GOOD

BE SHUNNED BY ALL THAT’S RIGHT FOR GOOD

THE MISFIT MUST GO

1 Response to The Inspiration for SPEAKEASY’S DUCHESS BENTLEY – The Terrific, Trangressive and Tragic Tale of Gladys Bentley – Part 1