Last August I posted a (lavishly video annotated) piece about Meryl Streep’s musical performances over the years (which you can reread below).  I concluded the article with the following:

Streep’s movie musical career continues with Florence Foster Jenkins, a movie currently in production about the real life self-deluded singing heiress who performed quite horribly in Carnegie Hall.  From Wikipedia: “Florence Foster Jenkins (July 19, 1868 – November 26, 1944) was an American socialite and amateur operatic soprano, who was known and ridiculed for her lack of rhythm, pitch, and tone; her aberrant pronunciation; and her generally poor singing ability.”  I can’t wait to hear Meryl Streep tackle that.  She’s going to be so good singing that bad!

And if the the early reviews are any indication, La Streep is once again “so good”.  Florence Foster Jenkins opens May 6 in the UK, and the British critics are praising the film as very enjoyable, well-made, with two excellent star performances in Streep and Hugh Grant.

Here some review excerpts, with special focus on Streep’s performance:

“Streep is note-perfect as a deluded diva.  Stephen Frears’s enjoyable, sentimental biopic gives Streep a role to relish, while Hugh Grant provides a touching foil in a genuine paean to mediocrity.”

“Meryl Streep shines in Stephen Frears’ finger-tingling comedy.  It’s pure Streep Soufflé – free from the weighty responsibility to imitate or emote the house down, she gives her most human performance since It’s Complicated, full of warmth that gives way to heart-pinching pathos.”

“Streep certainly has a ball mimicking the scarcely human strangulations of Jenkins’ vocal technique, though her characterization skates graciously shy of belittling burlesque: There’s an empathetic ardor for performance at work here, one that deftly coaxes even bewildered viewers into her corner.”

“Streep is tremendous as the jolly, optimistic Florence, whose tragic backstory is exposed in moving scenes with Grant (it’s his best performance in years).  But Frears never pauses too long on the sad stuff: Florence Foster Jenkins is as light, jubilant, silly and celebratory as the woman herself.”

Oh, to be living in the U.K. right now, where “Florence Foster Jenkins” opens May 6.  We unfortunate stateside blighters must wait until August 12 before it hits our screens!

Posted on August 5, 2015 by dannyashkenasi 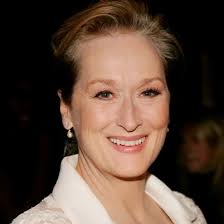 That Meryl Streep is one of the great actors of our time is common knowledge.  But what should now be considered obvious is how she is also the great movie musical performer of the modern age.  That statement may be countered with the assertion that she’s only been in two labeled-as-such movie musicals, Mamma Mia and Into the Woods (and Mamma Mia is arguably a jokey juke box musical which flaunts the casting of non-musical performers), but look closely at Streep’s film catalog and you will find her give a wealth of great and diverse musical performances, especially recently.  And just like classic Streep is famous for each new accent she would employ in movie after movie, musical Streep employs a new voice, with distinctive performance qualities, for each singing role.

Her current musical offering is Ricki and the Flash, opening this Friday.  The movie is being marketed as a family comedy-drama about a mother (Meryl as Ricki), who abandoned her family to pursue her rock star dreams.  I haven’t yet seen the film (yet most definitely will this weekend), but I have read that Streep sings at least a dozen songs with her band, including Lady Gaga’s Bad Romance (that kinda blows my mind).  In this clip she sings an original tune, accompanying herself on the guitar.  Listen to her “rock singer” vocals on this ballad.  There’s a touch of Bonnie Raitt there:

Ricki and the Flash – “Cold One”

Since we are starting with Streep’s current musical performance, let’s explore the others going back in time.  Which brings us to her performance as the Witch in Into the Woods, the only strictly-speeking-if-you-are going-to-be-a-total-anal-stickler-about-it traditional musical movie on the list (as well as the vehicle for Streep’s 19th Academy Award nomination).  A lot of people reacted with surprise at how well Streep sings in Into the Woods.  No one who has been paying any attention (see the rest of this list) should have doubted her technical and expressive range and power.  She does however raise the bar for herself from a purely singing perspective, performing with even richer vocal quality and resonance than heretofore heard, both in her head voice (see “Stay With Me”) and her belt (see “Last Midnight”).

Into the Woods – Stay with Me

Into the Woods – Last Midnight

As far as I’m concerned Mamma Mia is a movie musical as much as any other.  Many sniff their noses at this juke box musical with its goofy storyline and purposefully karaoke style singing.  But to me Mamma Mia was a very welcome happy pill when it opened the fall of 2001 in post-9/11 New York, and the movie captures its knowingly ridiculous appeal perfectly.  Besides, those ABBA songs are great.  Even the lyrics are great, except of course for those occasional phrases of questionable syntax.

Meryl Streep throws herself into the proceedings with loony abandon.  Her vocals are fun and determinedly unpolished.  Yet when she lets loose in “The Winner Takes It All”, the emotional power of her performance is stunning, and her singing chops clear for anyone to hear.  She even gives a linguistically lethal line like “A big thing or a small” her all.

Mamma Mia – The Winner Takes It All

In 2006 Meryl Street filmed a short called The Music of Regret, in which she very sweetly sings “Excellent Moon”, a Hawaiian style duet with a dummy, lying on a beach with a flower in her hair.  Her duet partner vocally is none other than Adam Guettel, the son of Mary Rodgers (Once Upon a Mattress) and grandson of Richard Rodgers (Oklahoma, The King and I, The Sound of Music) and a fantastic writer/composer of musicals himself (The Light in the Piazza).

The Music of Regret – Excellent Moon

A Prairie Home Companion is another musical movie that is often not categorized as such, even though it is brimming with musical performances.  In Robert Altman’s final film, Meryl Streep and Lilly Tomlin are part of the sprawling ensemble typical of an Altman movie,  playing the last surviving members of a country music act.  Streep plays a slightly dotty character, and her vocal stylings in her duet with Tomlin on “My Minnesota Home” ultimately verge on the endearingly goofy.  However in her duet with Garrison Keiller, the creator of the real A Prairie Home Companion radio show who plays himself in the movie, she sings with a sweet and sterling purity.

Prairie Home Companion – In the Garden

This next one is a cheat.  Because there is no singing in this clip.  But the dancing scene from Dancing at Lughnasa is one of the most life-affirming and celebrated dancing scenes in theater and film, even if the rest of the play and movie adaptation is decidedly non-musical.  Enjoy:

Dancing at Lughnasa – the dancing scene

Death Becomes Her opens with Streep’s character, the vain, manipulative Broadway diva Madeline Ashton, singing the stupendously awful “Me” from an ill conceived musical version of “Sweet Bird of Youth”.  Streep’s trilling is perfectly glossy, and then every bad dance break convention in musical theater history is thrown one after the other into the mix …

Death Becomes Her – “Me”

Before “Into the Woods”, the most widely praised on-screen musical performance of Meryl Streep’s is “I’m Checking Out”, the triumphant final number in “Postcards from the Edge”.  It signifies her troubled actress character’s ultimate coming into her own as a person and an artist.  Compare this pull-out-all-the-stops country-rock performance with the touchingly halting and insecure performance of “You Don’t Know Me” earlier in the movie, and you have two clear examples of Streep approaching every song she performs as a character actor and storyteller first and foremost.

Postcards from the Edge – I’m checking out

Postcards from the Edge – You Don’t Know Me

Unless I’m missing something (and if I am please leave a comment), Ironweed in 1987 was the first time Streep sings on screen.  She plays a homeless alcoholic during the Great Depression, who imagines herself winning great acclaim for her singing, only to awake from her delusions to cold reality.  It’s a bravura scene where Streep captures the vocal inflections of the Vaudeville and Tin Pan Alley singers of the era as perfectly as any accent she deployed in the 1980s.

And here come two more cheats, because they are not from movies, but they are treats.  Meryl Streep played Mother Courage in the Public Theater’s free summer stage production of Brecht’s Mother Courage and her Children in 2006.  The play includes several songs for which Jeanine Tesori (deserved Tony winner for Fun Home) composed the music.  Tesori’s writing takes advantage of Streep’s vocal and expressive range, surprisingly shooting her voice into a high soprano at one point.  Mostly though this is Streep in raspy “Brechtian” mode:

And finally, as another bonus track, here is Streep singing “What a Wonderful World” with Bette Midler, Goldie Hawn and Olivia Newton John (plus who appear to be Cher and Lilly Tomlin) at a “Friends of the Environment” benefit concert.  It’s 1989 and the vocals are almost as generous as the shoulder pads.

And there is more to come!  Streep’s movie musical career continues with Florence Foster Jenkins, a movie currently in production about the real life self-deluded singing heiress who performed quite horribly in Carnegie Hall.  From Wikipedia: “Florence Foster Jenkins (July 19, 1868 – November 26, 1944) was an American socialite and amateur operatic soprano, who was known and ridiculed for her lack of rhythm, pitch, and tone; her aberrant pronunciation; and her generally poor singing ability.”  I can’t wait to hear Meryl Streep tackle that.  She’s going to be so good singing that bad!

Did I miss a movie Meryl Streep sings in?  Let me know in the comments and I’ll add it to the list.