What we are doing with our Coronavirus Relief Money

Ed and I will be donating our Coronavirus relief money to “Church and State”.

Me to “State”, meaning the baker’s dozen of senate races where Democrats have a good to fighting chance to oust the Republicans:

1. Kentucky – Amy McGrath is neck in neck with the odious turtle Mitch McConnell. It would be so sweet to get rid of him!

2. Maine – Sara Gideon is leading in polls against Susan Collins.

8. Montana – popular ex Gov Steve Bullock should have an even chance against Steve Daines.

10. Alaska – Independent Al Gross, endorsed by the Democrats, with whom he would caucus, is fundraising well and might beat lightweight Dan Sullivan.

11. Georgia has two seats up for Senate this year:

A) Either Teresa Tomlinson or Joe Orsoff, both strong candidates, will face off against David Perdue.

B) Pastor Raphael Warnock is the strong Dem candidate in a free-for all multi candidate Nov election for Kelly Loeffler’s appointed seat, including a formidable Rep challenger. There will likely be a Jan 2021 run-off. Remember Loeffler is one of the senators who made stock $ after a secret Coronavirus intelligence briefing. Hers is the most egregious of the stock scandals.

Also, Stacey Abrams, who is endorsing Warnock, would have won the Georgia Governor’s race last year if not for voter suppression. Georgia is turning purple. Both Senate seats are in reach.

And all the other defending Republican senators this year are likely safe in their solidly red state seats, as are all the Democratic incumbents, except for …

13. Alabama – Democrat Doug Collins is expected to lose to whoever the Republican candidate ends up being (a total Trumpist or Jeff Sessions…ugh either way). But hey, he did win once before, so maybe he can win again, even though … well, Alabama… I will be giving to his campaign too. 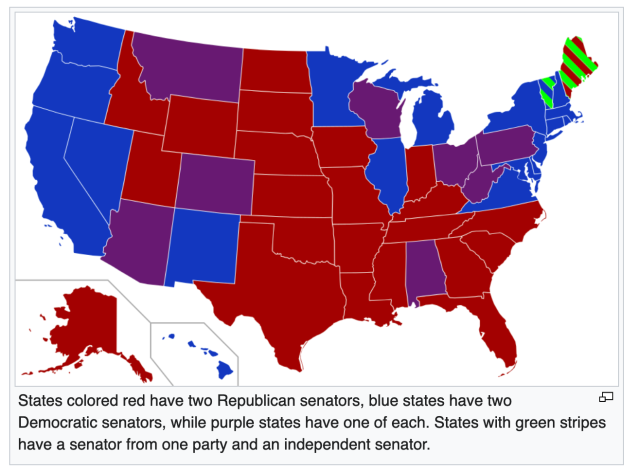