Posted on September 14, 2019 by dannyashkenasi 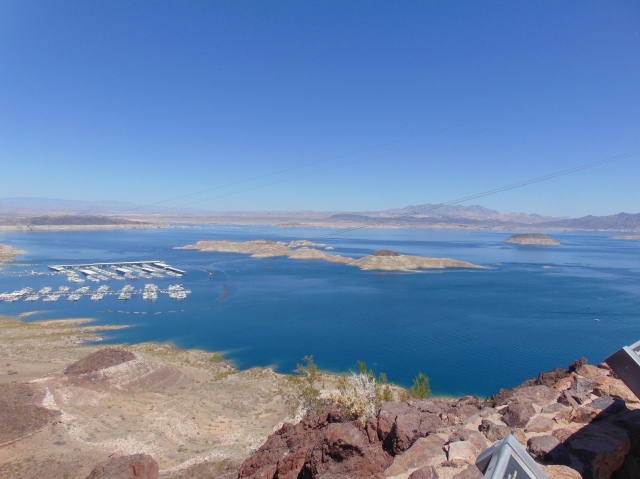 This is the first view of Hoover Dam you get after parking your car at the designated lot. 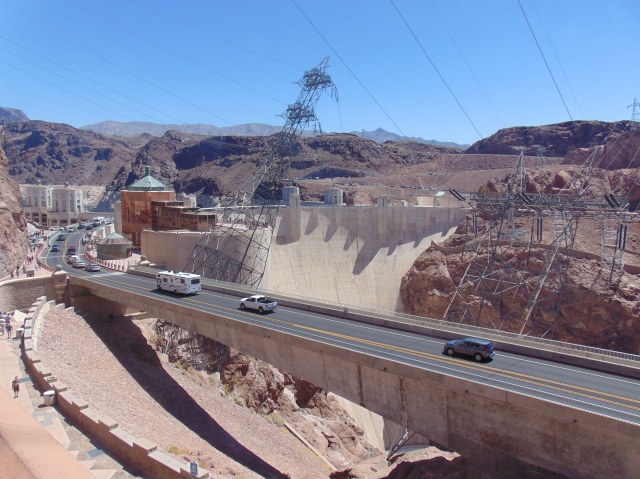 Dam! Song Query #1 – Who are the movie/tv stars singing “Dammit Janet” in this song from which cult musical?

Looking to the right, from the same spot, the new Memorial Bridge, that now diverts traffic off of the Dam’s road (which had become too narrow for all those cars). 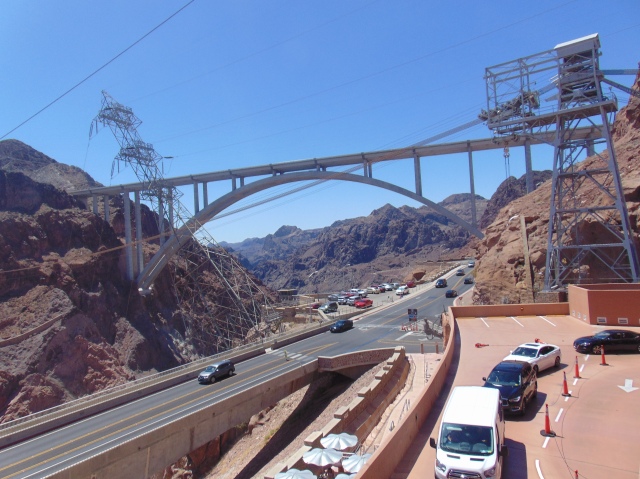 Memorial statues in the art deco style of the time the dam was completed. 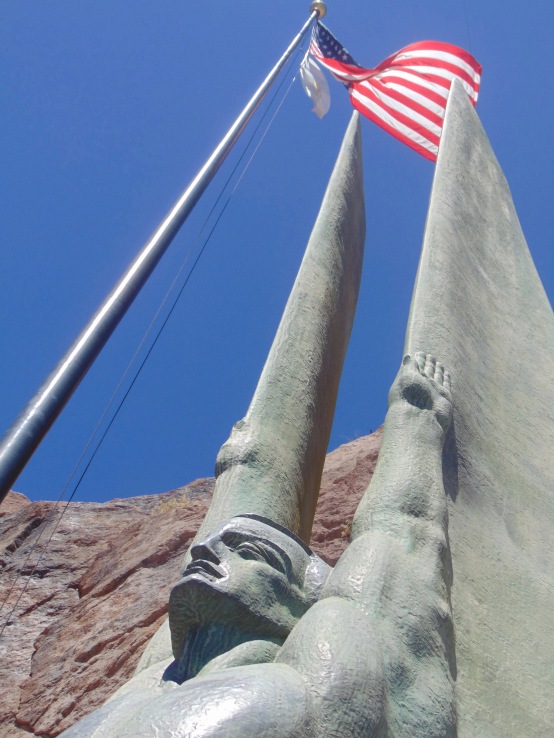 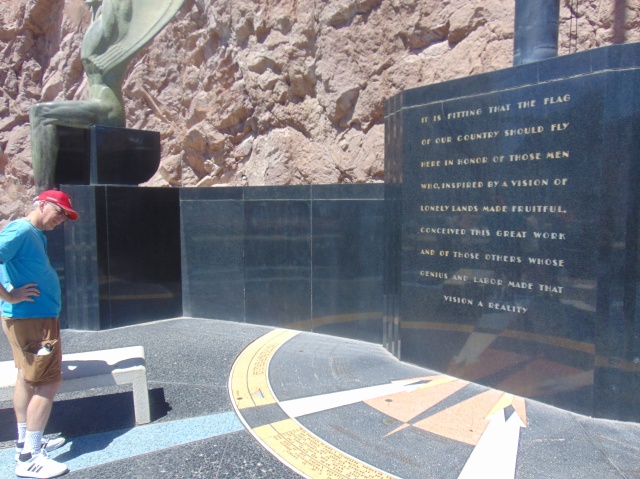 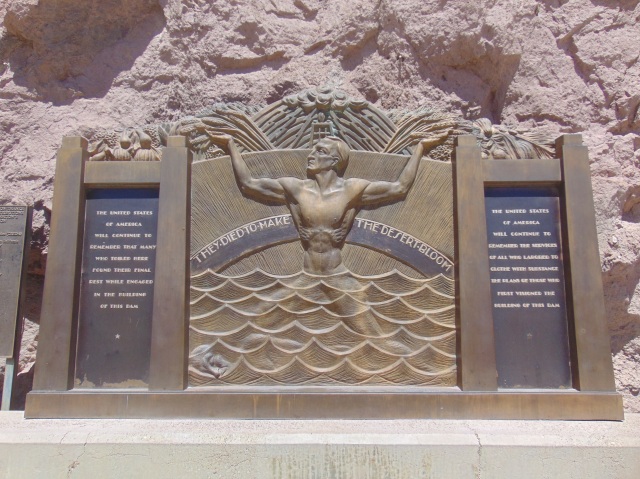 Many men died building the Hoover Dam.  But the myth that some bodies are encased in the dam’s cement is just that, a myth. Officials actually felt compelled to include a plaque (not pictured) explaining how that would not have been physically possible, considering the thin layers of cement that were layered and hardened one at a time during construction.

Ed walks ahead onto the dam pathway, while I turn my camera towards structures on Lake Mead.

Dam! Song Query #2 -Which character (and performer) is singing that he is “Damned for All Time” in which classic rock opera?

The Lake Mead water level is now clearly much lower than it was at its height. 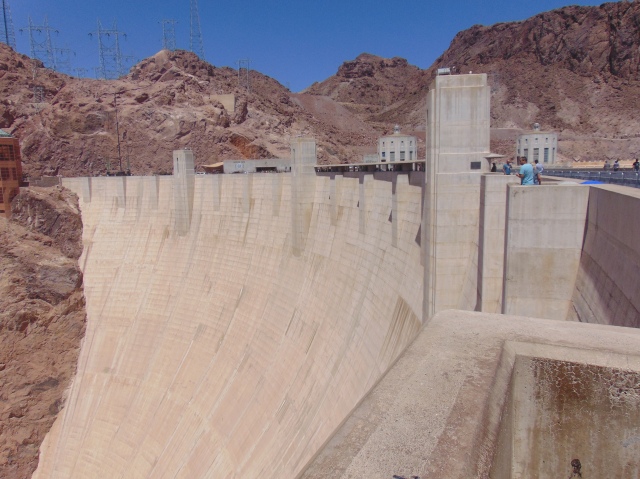 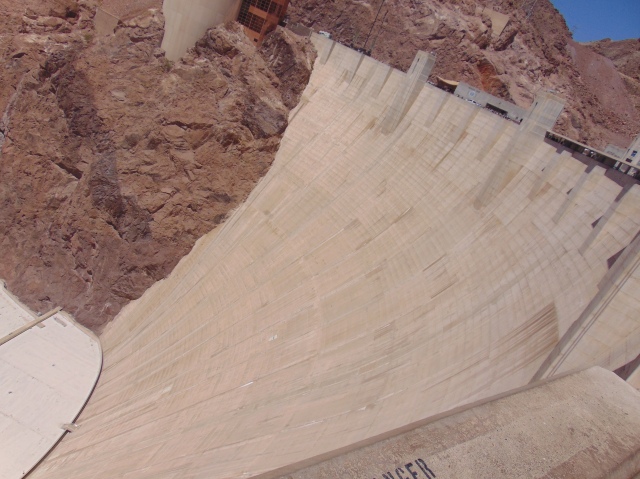 Not sure whether these pictures accurately convey just how high the dam is and how steep and alarming the look down. 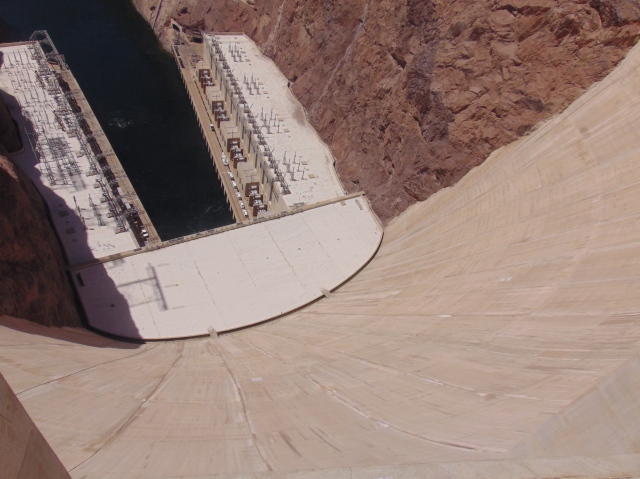 I felt serious queasiness on the dam and later on the bridge. I realized later at the Grand Canyon and other parks that it is not that I have a fear of heights per se (I can be quite calm in certain high wire situations), but that I have a (9/11 induced) terror of falling (or being flung) from high, especially high man made structures, like open windows or balconies or roof tops.

That irrational terror had a field day with me here. 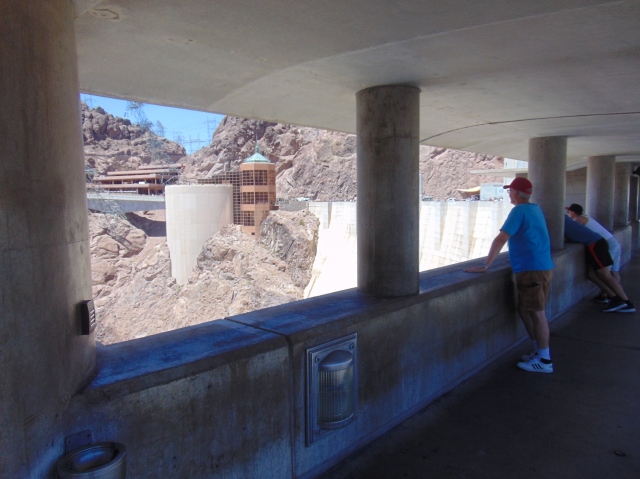 Another statue among many honoring the dam’s construction workers: 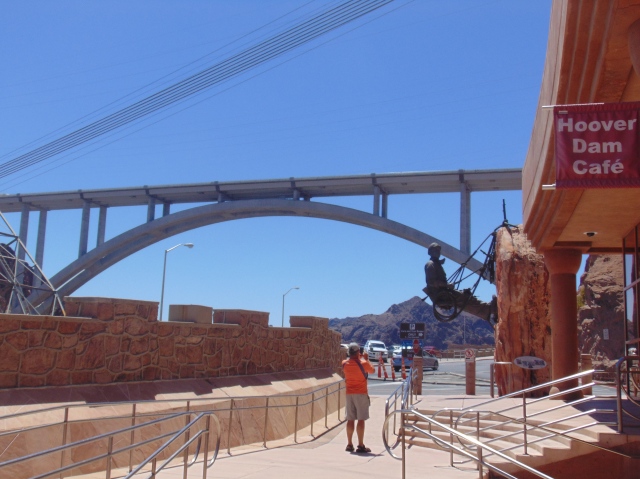 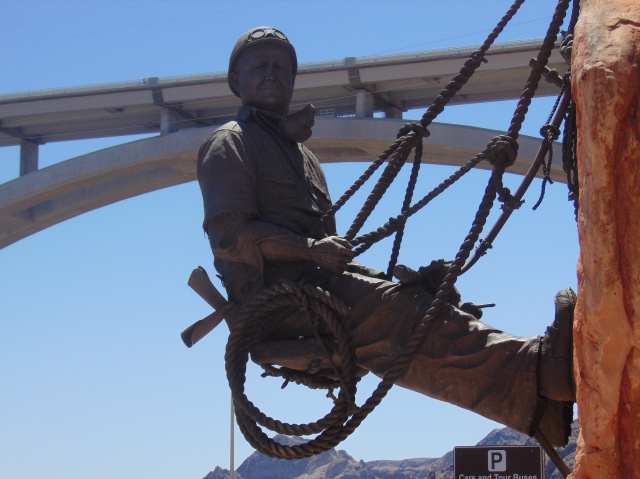 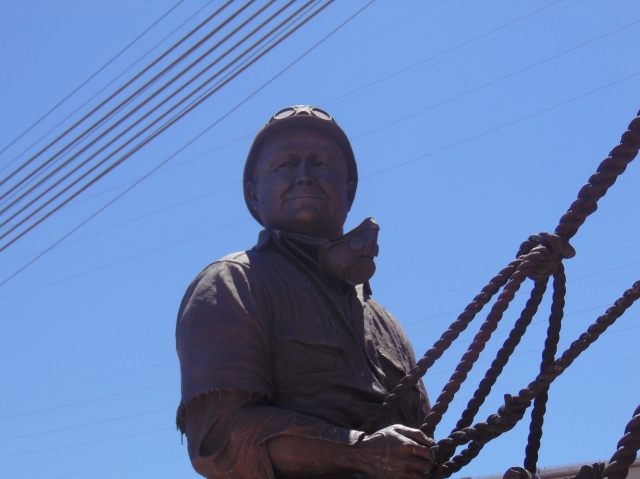 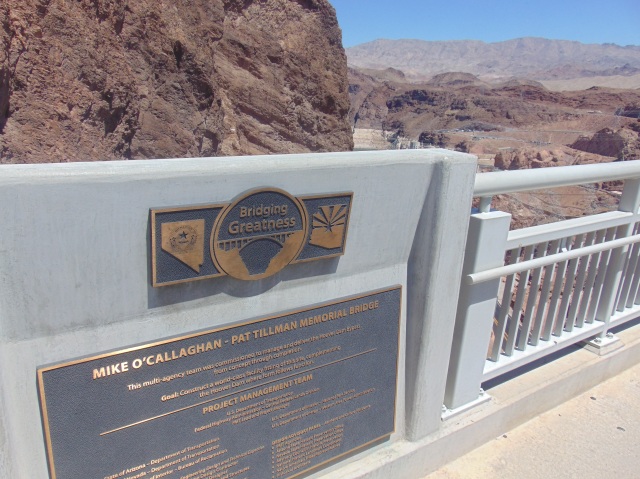 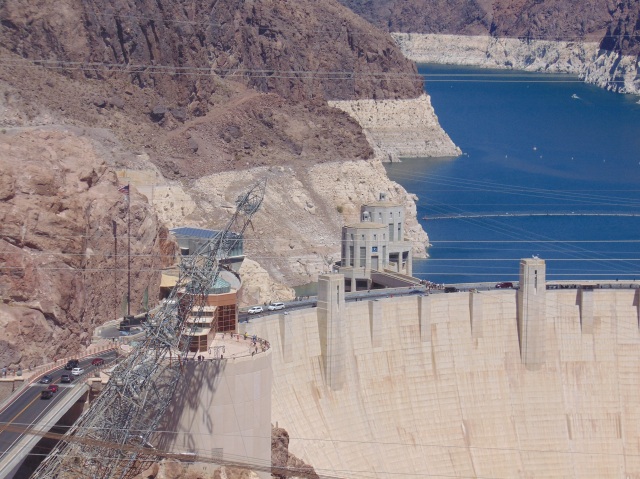 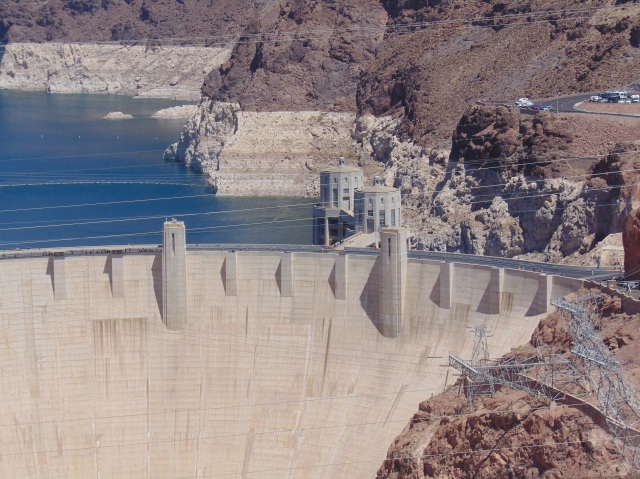 Bridge Song Query #2 – Name Simon and Garfunkel’s other famous song with “Bridge” in its title.  But which bridge?  And from where to where does it span?  (Listen all you want, that info is not heard in the lyrics:) 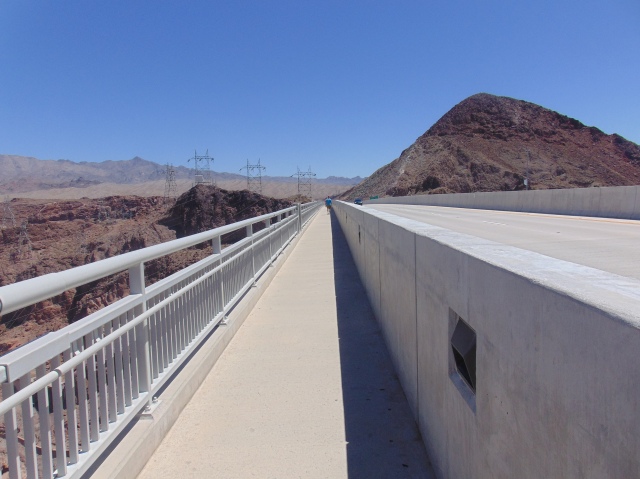 Looking towards Arizona… and back towards Nevada. 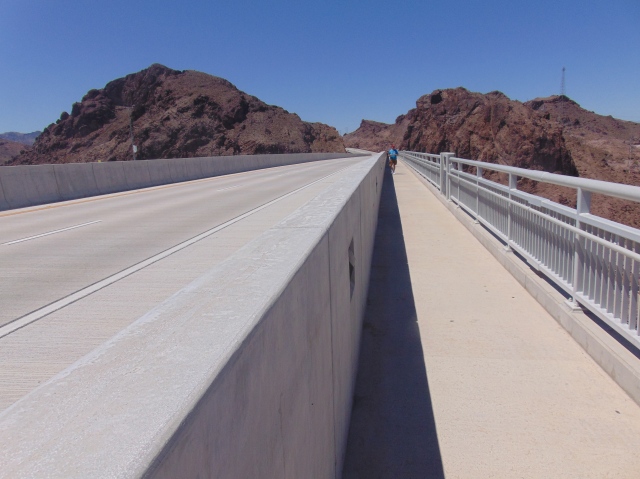 Bridge Song Query #3 – Which British diva is singing about “Water Under the Bridge”?

On our way back to Las Vegas, we stopped in the suburb of Henderson to visit the gorgeous cactus garden maintained by the Ethel M chocolate factory (and open to visitors free of charge). 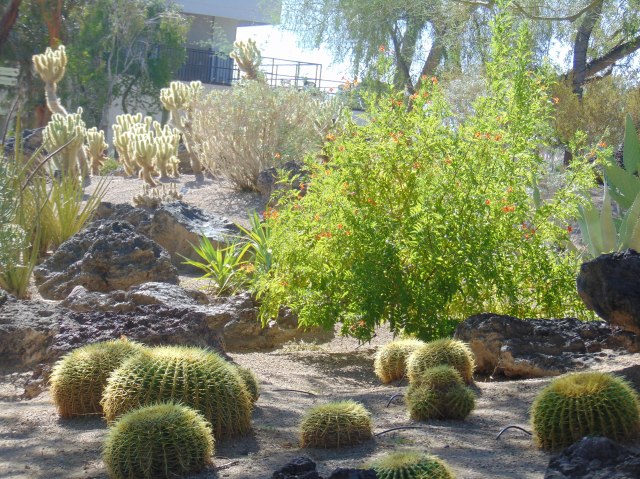 The factory runs on solar energy from their own solar array. 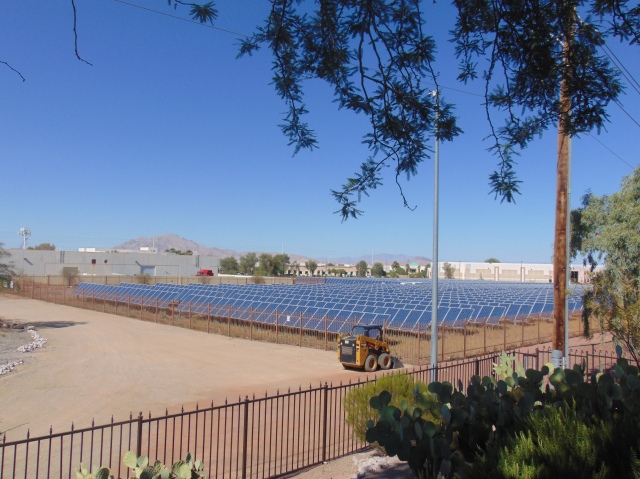 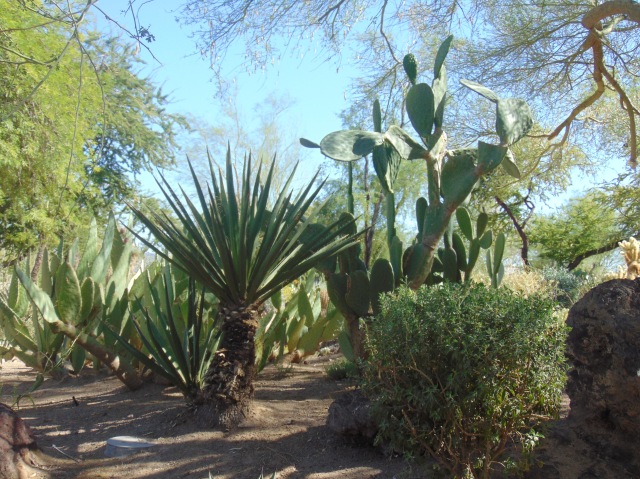 A sign in the garden explained that the popular golden barrel cactus is nearly extinct in the wild because of over-harvesting in the late 19th century.  Everybody wanted their own golden barrel cactus in their home or office until people realized they had plucked too many out of the desert for the species to continue to sustain itself in its natural environment. 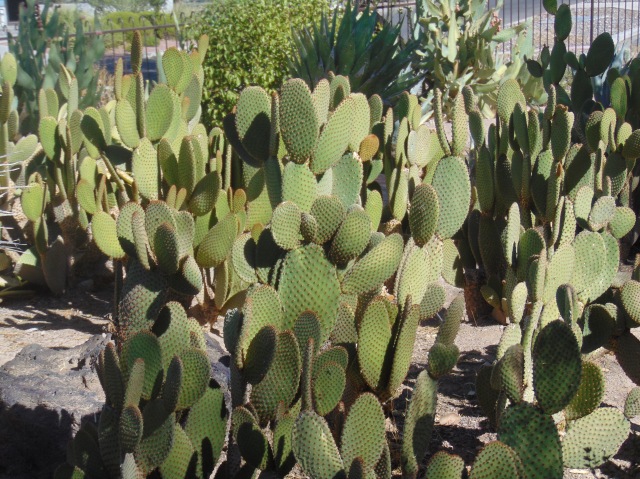 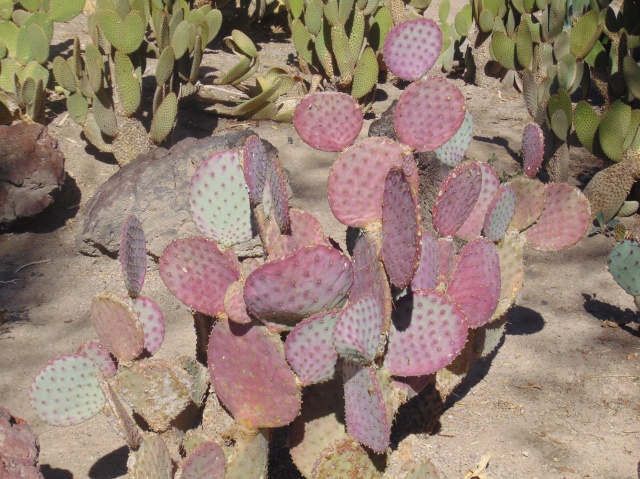 Bridge Song Query #5 – The Fellowship of the Ring is having a really bad time with a Balrog at which bridge of Moria? Oh, and who composed this score again? 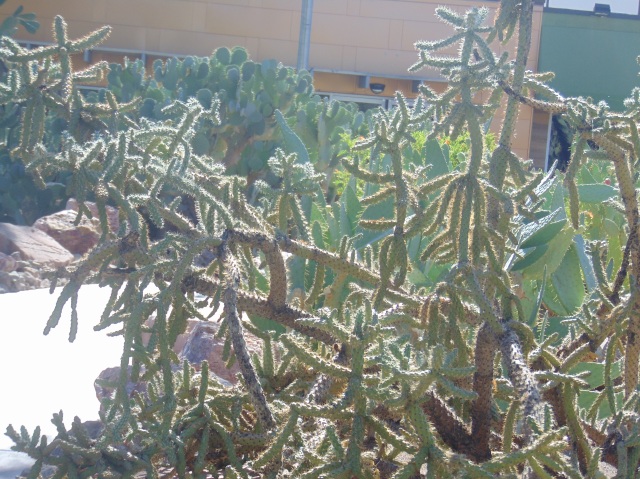 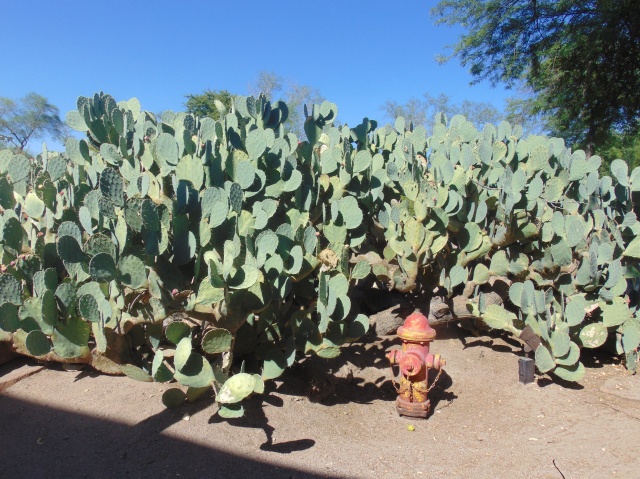 I took this shot of the Hoover Dam, Memorial Bridge and Lake Mead from the plane as we flew out of Las Vegas at the end of our Southwest Adventure:

Hope you enjoyed our day of music and sights at Hoover Dam, Memorial Bridge and the cactus garden. 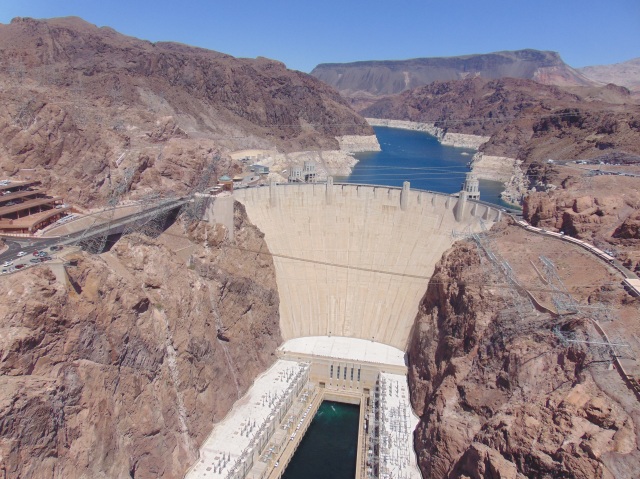