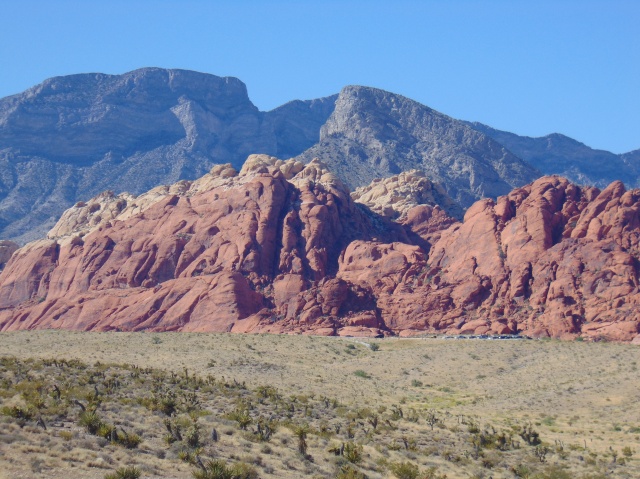 Ed and I flew into Las Vegas last weekend.  It’ll be our base for a week (more on that later) as we plan a tour of the Great American West, or as much of it as we can manage.  I’ve never been to this perhaps grandest part of this great country, and I’ve always wanted to.  So this is the year that particular dream is being fulfilled.

That’s why my first post of this series of Twofisted Touristing chronicles will start with a desert park, not the glitz of Las Vegas lying just a few miles to the east of Red Rock Canyon.

It is natural wonders these posts will be mostly about after all. 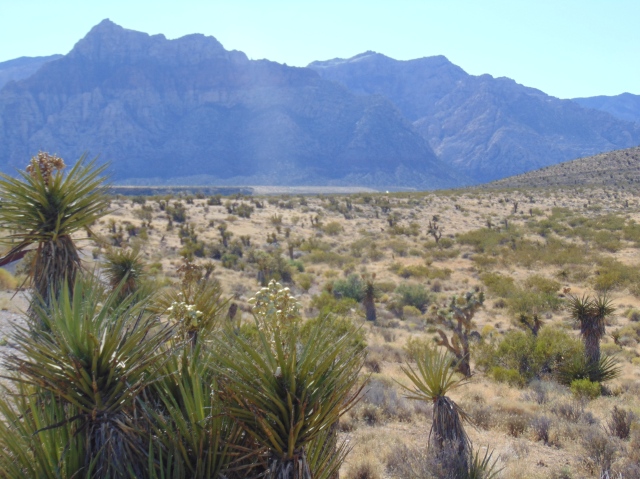 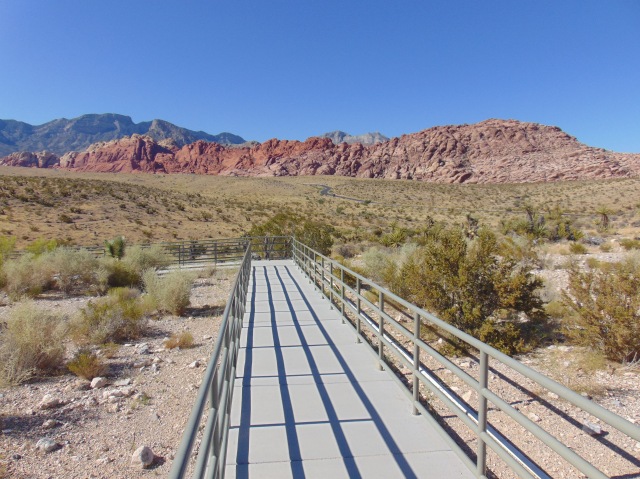 Just a hop, skip, and a 20 minute drive from the part of Las Vegas where whatever happens happens to stay, is the scenic drive that takes you on an easy access loop past some of the main attractions of Red Canyon National Conservation Area.   The view above is from the visitor center.

Below, a hiker on one of the many hiking trails through the desert and into the mountains. 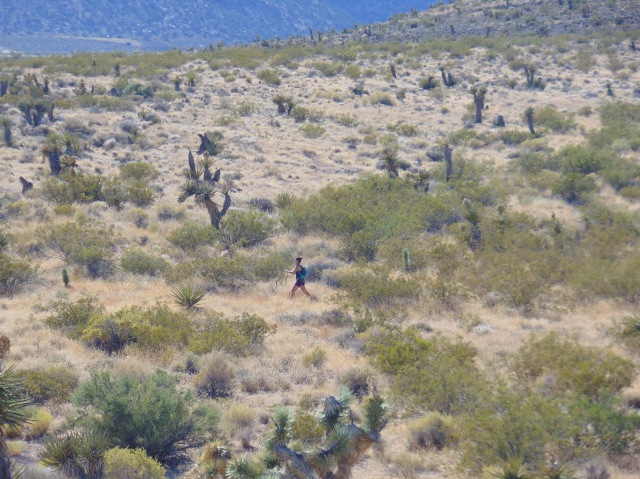 The visitor center has humming bird feeders, which attracted this little fellow with the bright red neck: 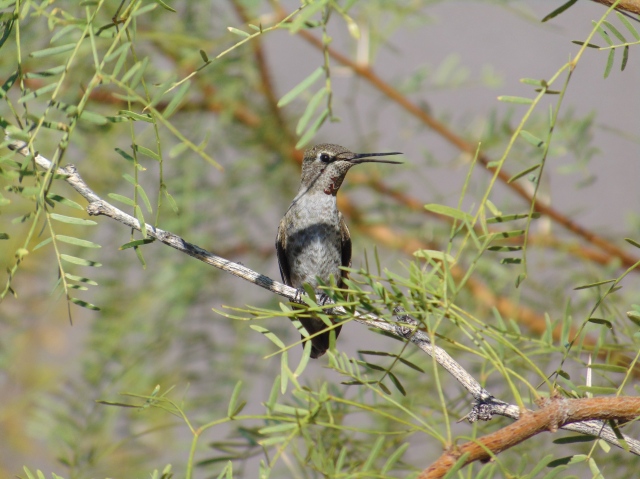 The view of Las Vegas from the park. 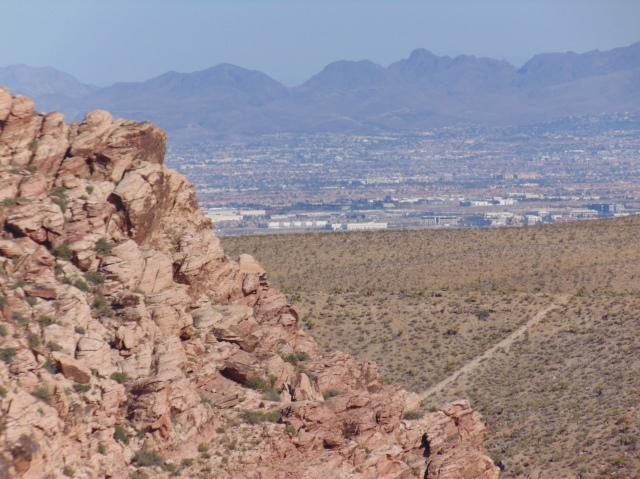 First stop on the scenic route road: Calico I.

I would guess these are the rocks that give Red Rock Canyon its name.

This formation looks a bit like a giant turtle. 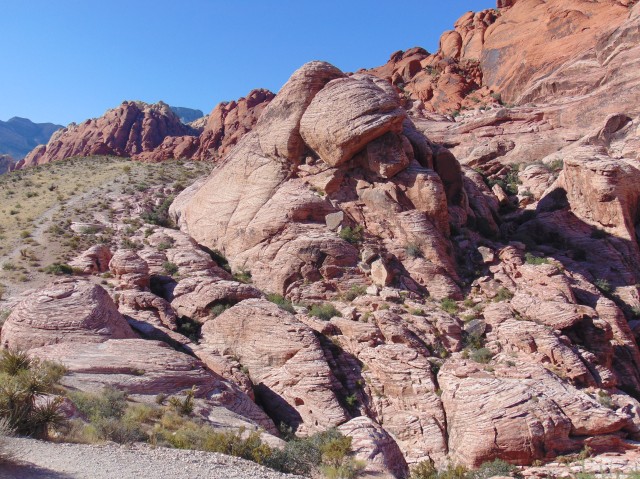 Let me see how well I remember what I learned at the visitor center.  These rocks were formed from primordial sand dunes, which themselves formed after the primordial ocean, that once covered these parts with water, disappeared.

The darker red rock is from a more recent geological age, the lighter rock is older.

The lines in the rock are various levels of sand before they petrified into stone. 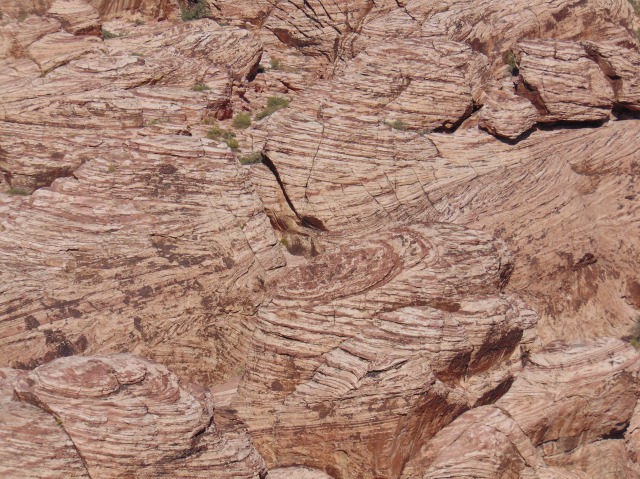 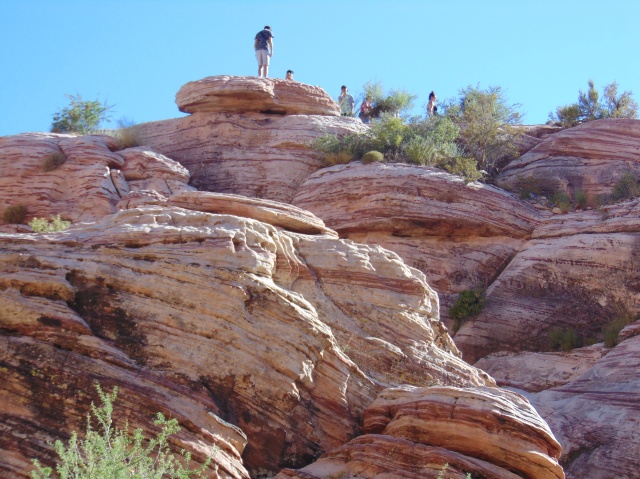 At the visitor center we were reminded to leave no trash (Ed found himself picking up glass and other items fellow travelers had discarded), and to “leave the park better than we found it.”

Which brings me to these four whimsical stone sculptures (peace sign, heart, smiley faces) previous visitors created.  Is that leaving the place better than they found it? 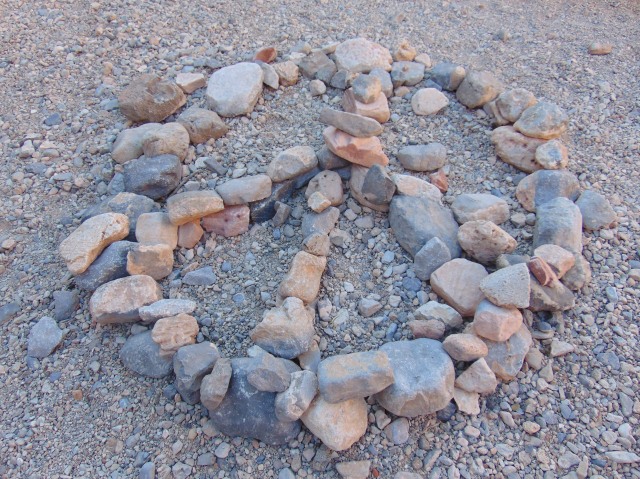 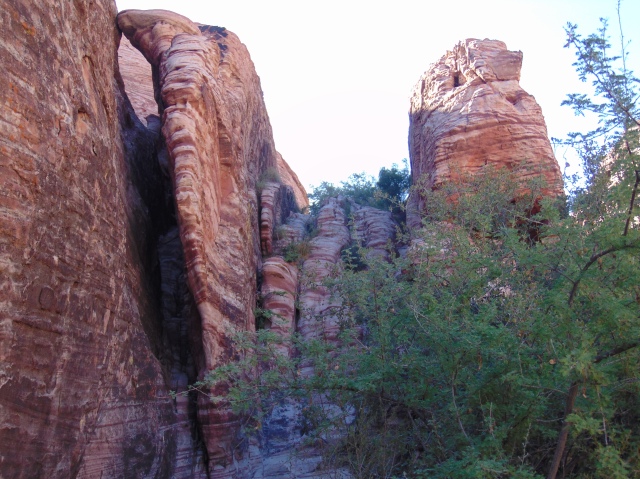 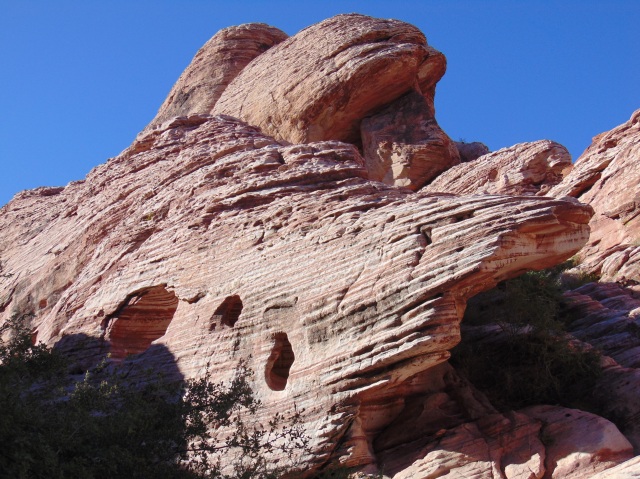 Here, somehow, over the eons of geologic processes, older rock ended up on top of newer rock. 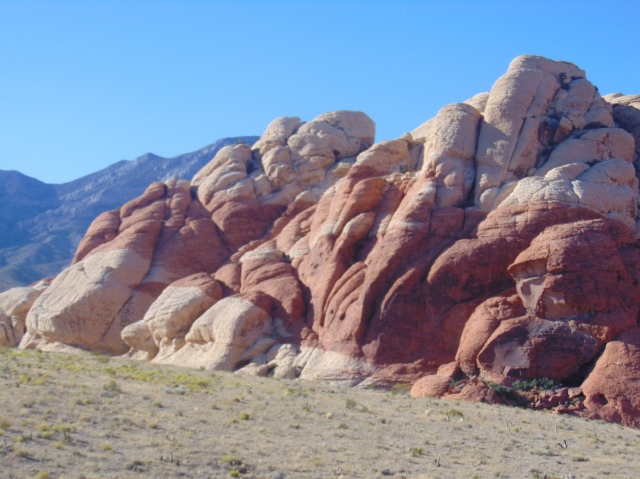 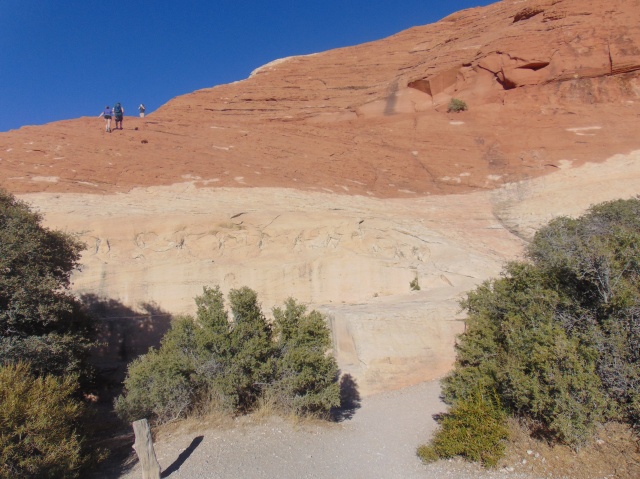 For a short while in the early 1900s there was a sandstone quarry here, but it was abandoned as unprofitable. 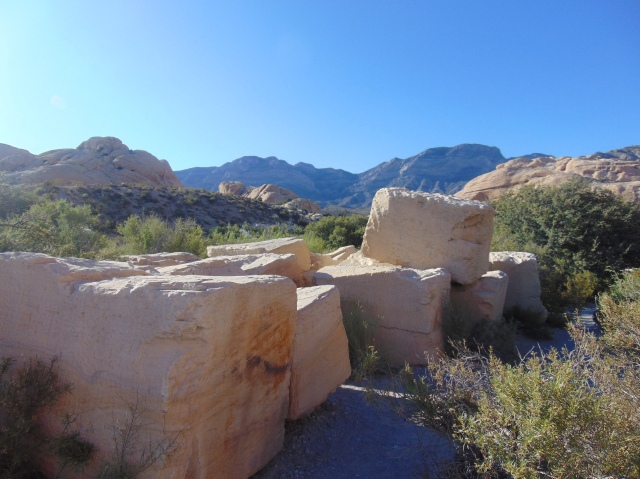 Turns out the Sphinx of Giza has a naturally born cousin in Nevada. 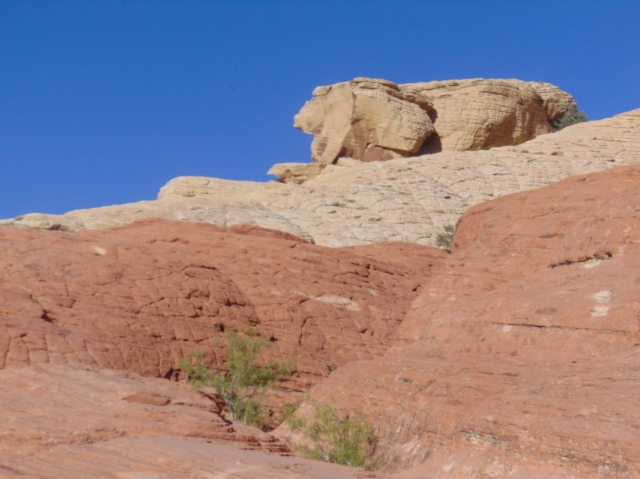 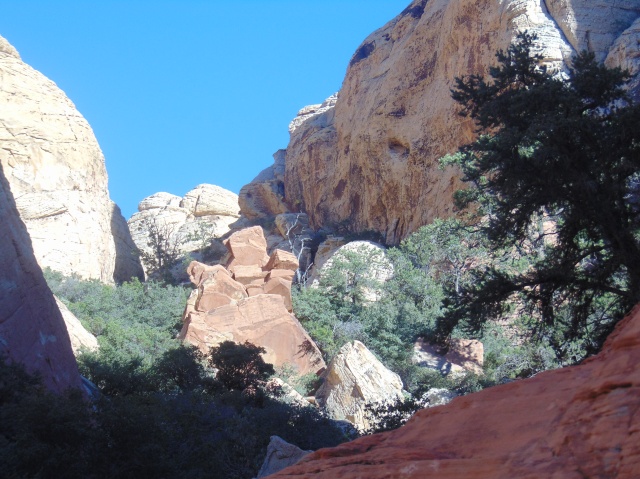 That’s Ed.  The back of him often graces my pictures as I fall behind to take them.

At the High Point Overlook: 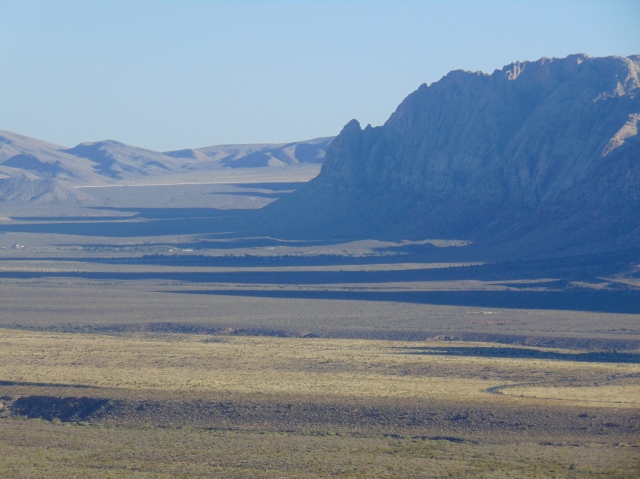 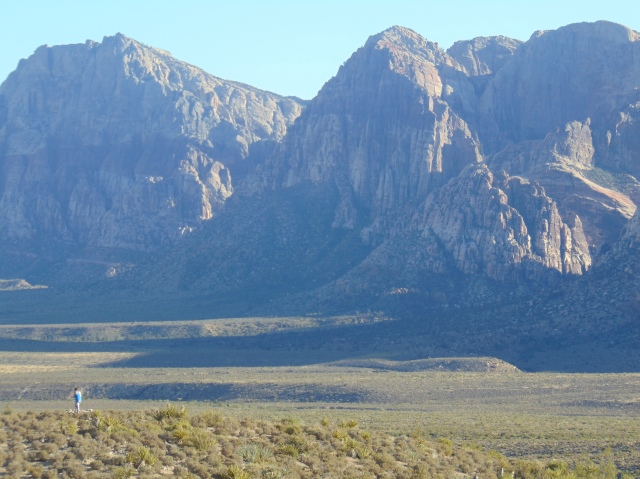 Another view of Las Vegas from afar, with the Calicos in the foreground 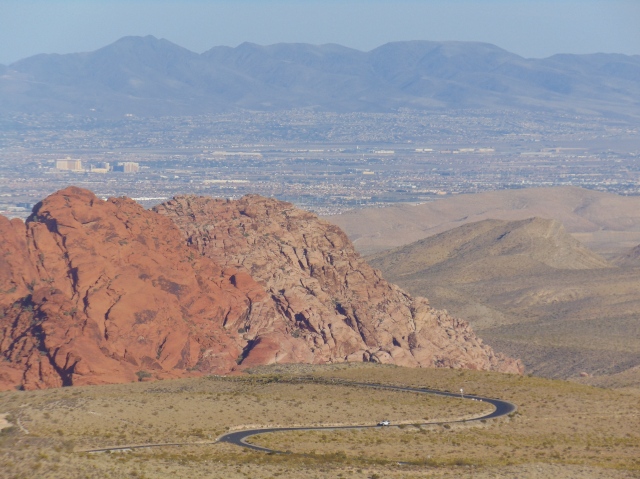 Here we are by the Petroglyph Wall Trail.

And here are the ancient petroglyphs. 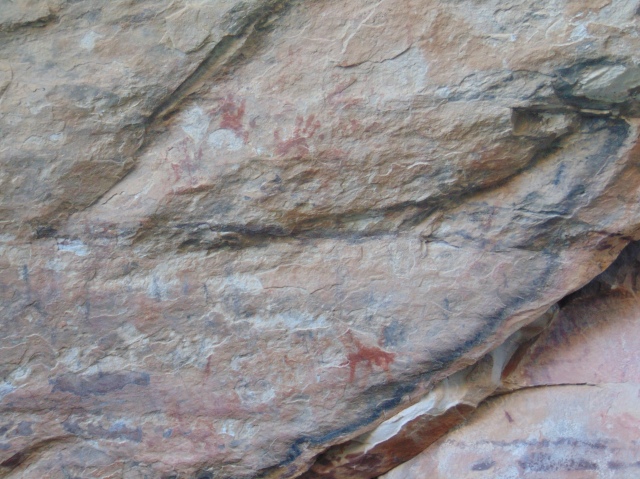 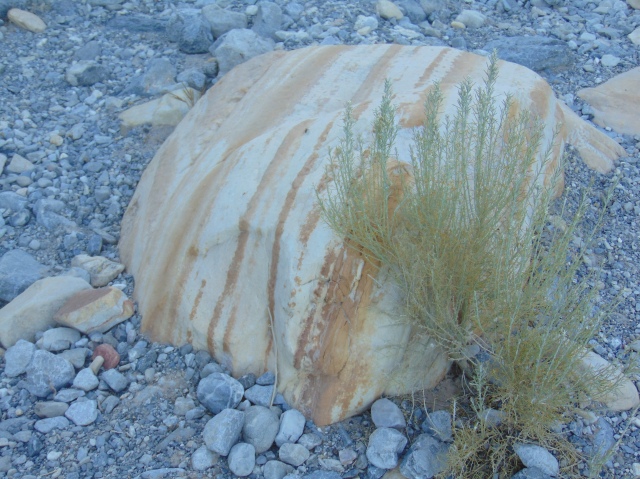 And here is what happens when a stone doesn’t get its measles vaccination. 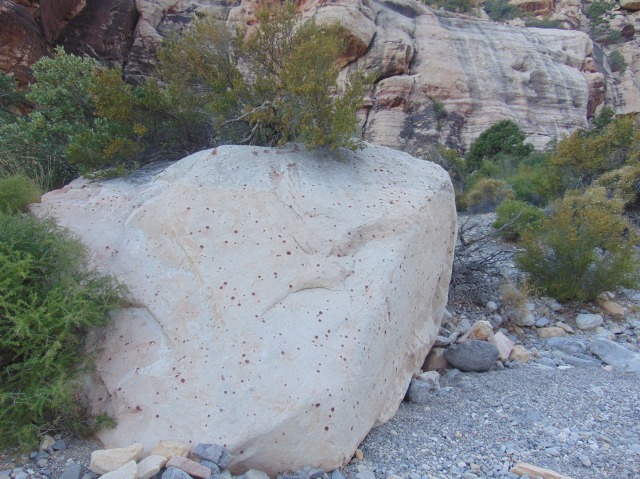 Moving on to 360 degree views from the Red Rock Wash Overview. 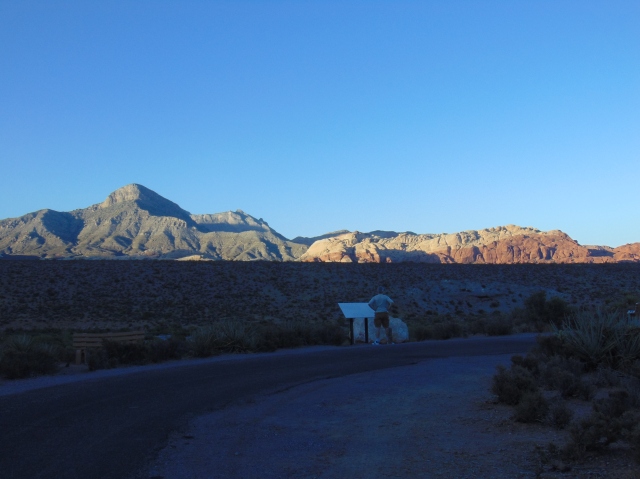 The wash is a basin area where flash flooding, the rare times it occurs, will fill the area with water.  The soil is gravely and the plants are larger.

The moon among the cacti.

And finally, shortly before they closed the road at 8pm, some dusky views from the end of Oak Creek Road. 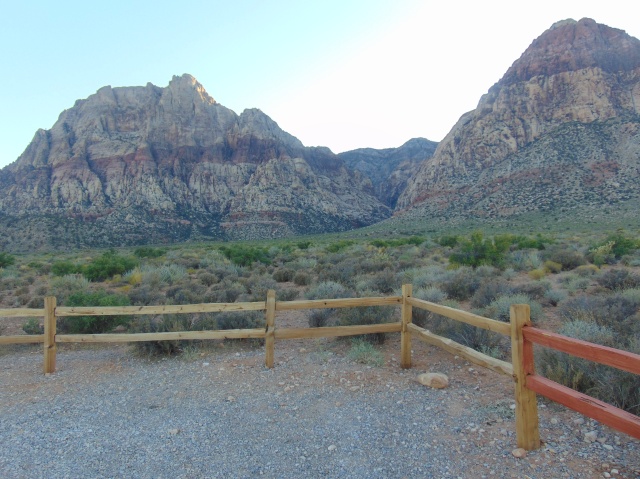 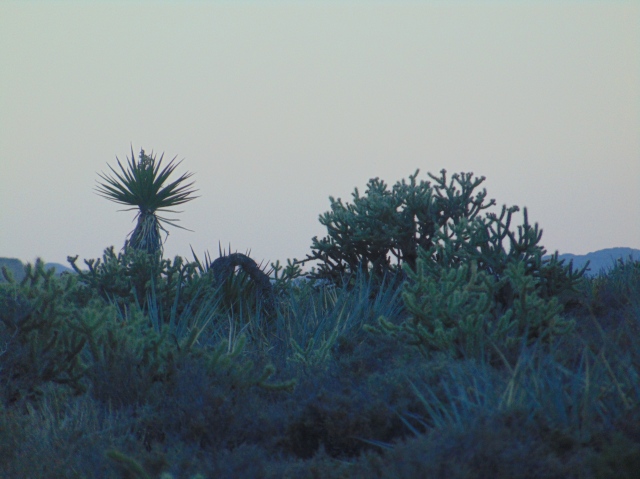