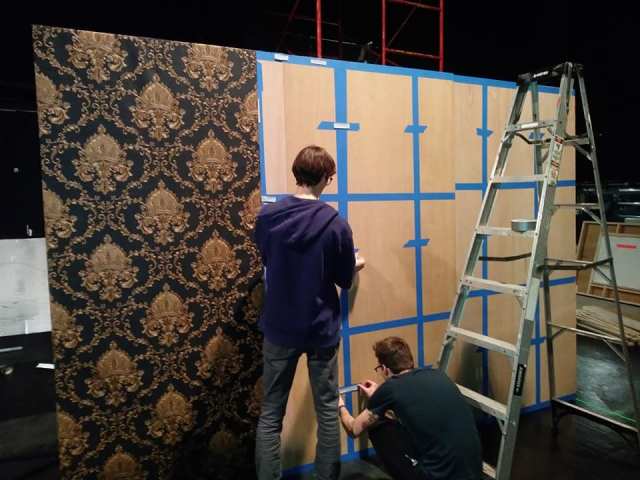 This post may give away some Tell-Tale movie musicabre design secrets! 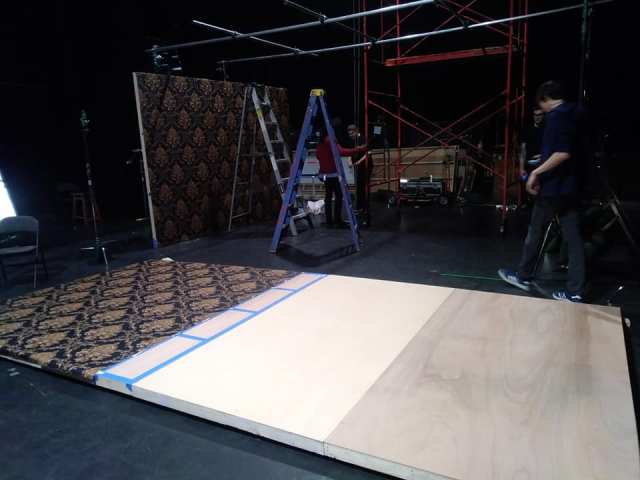 Well, the other posts talked about plot points that are well known to anybody who read or possibly even heard of the original Edgar Allan Poe story “The Tell-Tale Heart”.  But today I am going to share some crucial set design tidbits.  And the set design, particular the wallpaper this post focuses on, may reveal aspects of our short film that have more to do with our cinematic storytelling concept than the Poe plot.  And though I will try to be a little cagey in what I reveal and how, not give all away but try to keep a certain amount of mystery alive, it won’t take too much effort to read between the lines, or among the photos, how the set design might have been utilized as a story telling device. 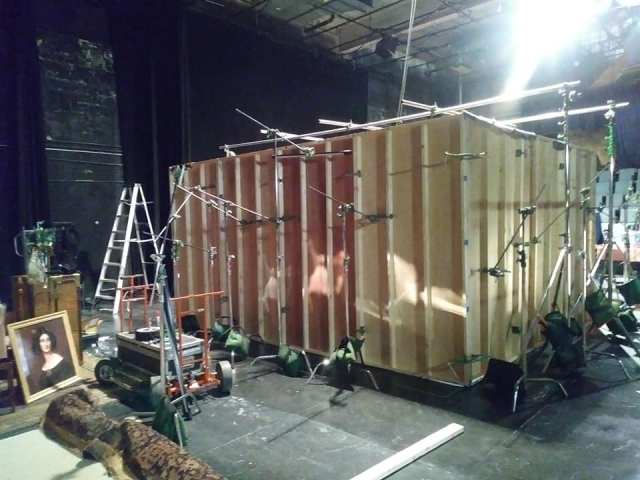 Above is the back of our set, in the theater space we turned into our film studio for a week.

And below is the wallpaper our set designer Nicholas Callais found.  It would have to ultimately fulfill multiple functions. 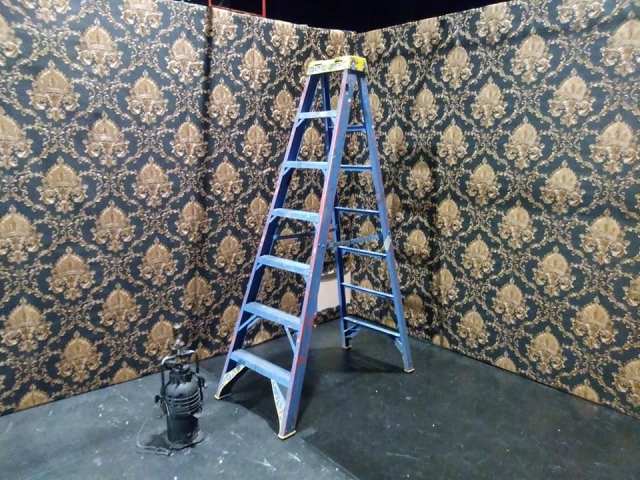 Below you can see the bedroom dressed with furniture and framed pictures.  And film equipment.  And an overturned mattress on the floor indicating which particular scene is being shot … 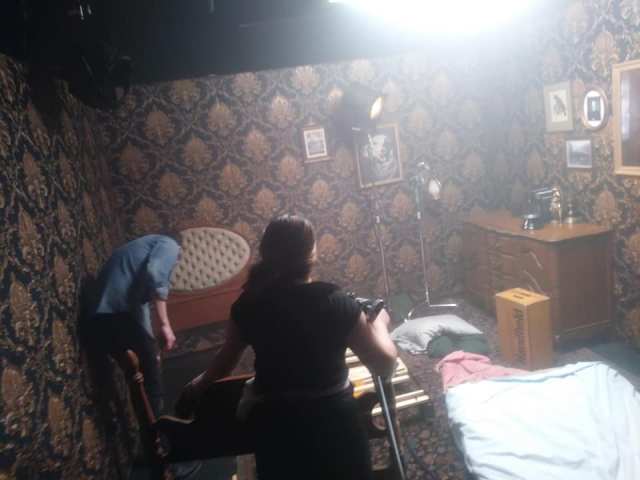 “The Tell-Tale Heart – a musicabre” is in color.  But the flashbacks to the time of the murder are seen in black and white.  Here is a screen shot that shows how nicely the gold thread of the wallpaper reflects light.

We also see me as the narrator washing my hands in a big bucker of water.  Why would I be doing that…?

Here we are shooting the shot you see above.  That’s Nicholas to my right, and D.P. Jason Chua and Assistant Cameraman Harry Walker behind the camera.

If you look closely at the pictures on the bedroom wall, you can see a certain special someone making an appearance…

In the film it is a blink and you will miss it moment.  Here is the screen shot, but I’ll keep secret when in the film it happens.  Only mention that, although it looks here as if my character is looking right at Poe, I am actually looking at a shadowy figure you can’t quite see off to the right.

That is how the wallpaper looked and was filmed during the first couple days on set.  Then there was a transformation, and the set became something else altogether.

The wallpaper stayed on the set walls, but was altered … blackened …

Here I am, sitting on a stool, surrounded by the blackened walls… 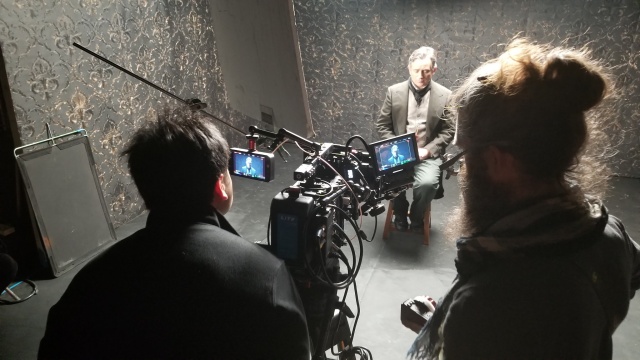 Again, that’s Jason and Harry in the foreground.

Let’s take a look at those walls without distracting furniture or crew members at work.

Do you recognize the wallpaper from before? 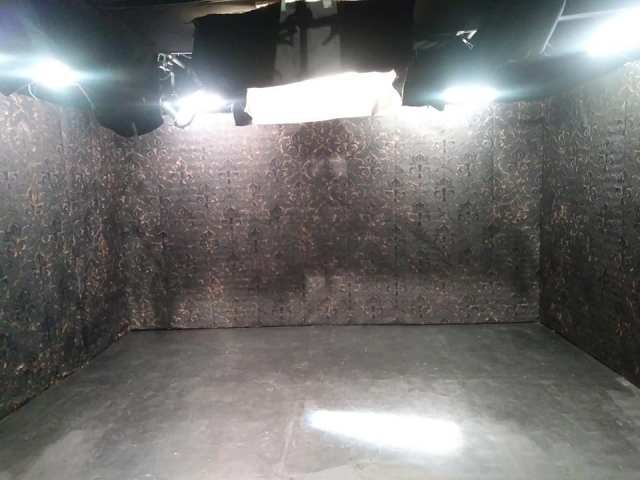 For most of the rest of the film the wallpaper designs behind the black will not be as obviously visible as in these photos above.  They will be seen in shadows or out of focus like below: 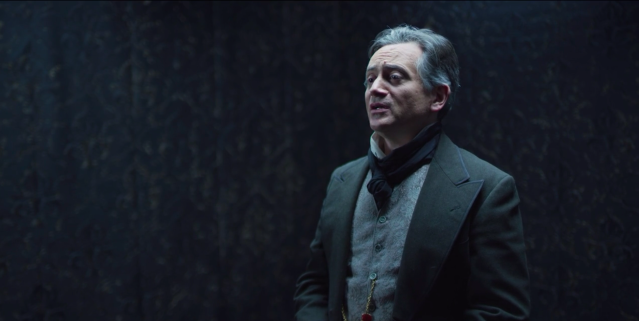 But they are supposed to be an ominous mysterious presence.  What is this room without doors and windows that the narrator finds himself within?  What are these patterns on the walls?

You see now why I felt the need to put a spoiler alert at the top of this post, even if I won’t spell out the complete spoiler any further? 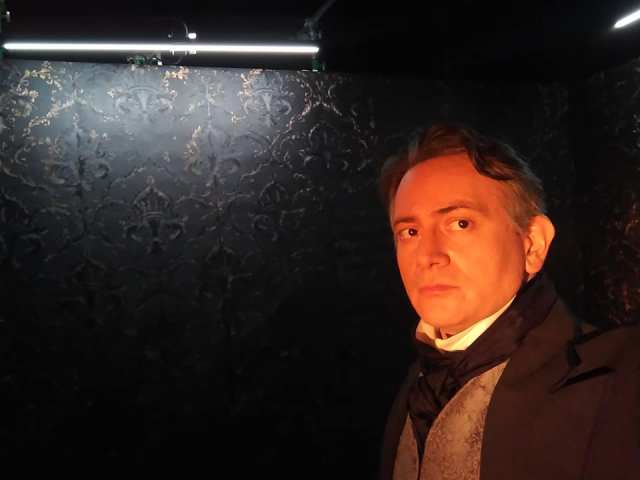 Or makes my character uncomfortable.  I felt sentimentally attached enough to the blackened wallpaper that I had a large square of it framed.  It now hangs in the guest bedroom, with other framed memorabilia. 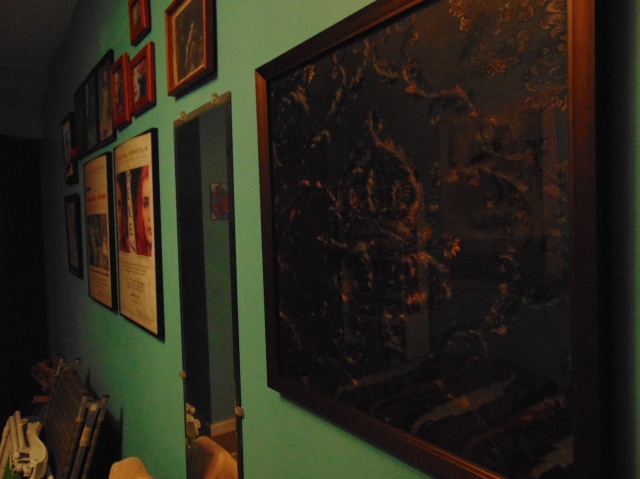 Back to the wallpaper from hell.  Here it appears in a narrow corridor (with Ja’rel Ivory, our gaffer), 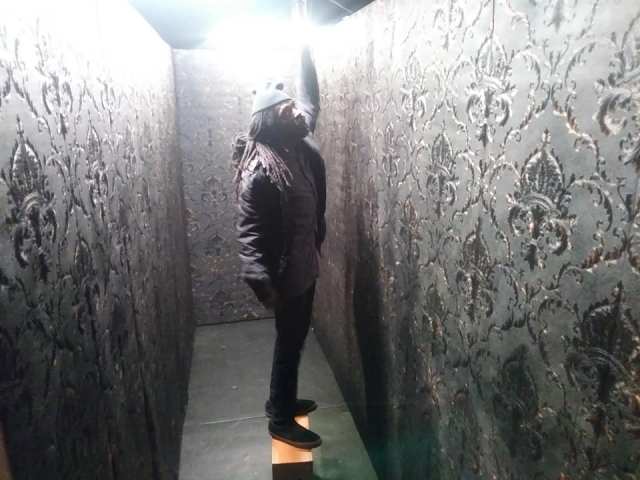 Why has the set shrunk down to just this corridor? 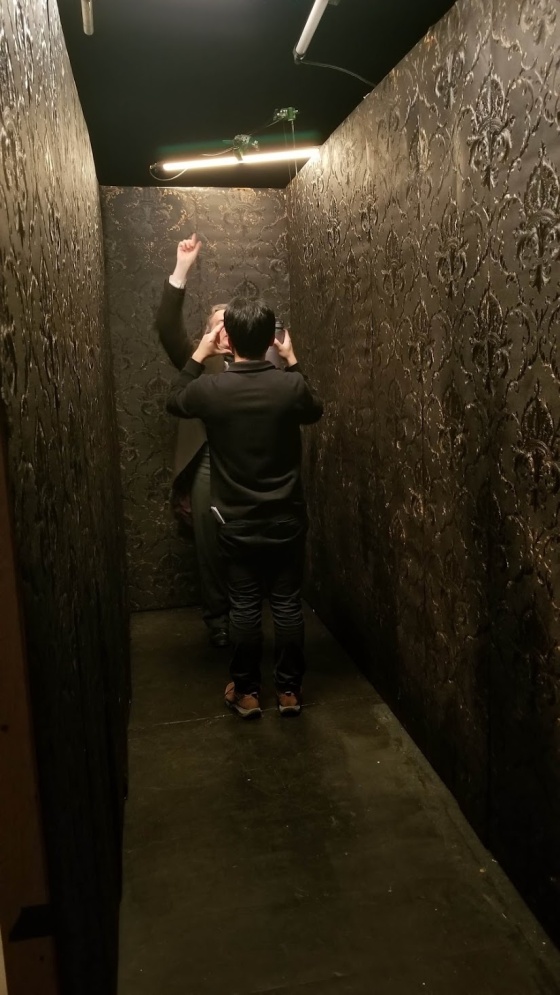 That’s me and Jason, by the way.

Where is the rest of the set? 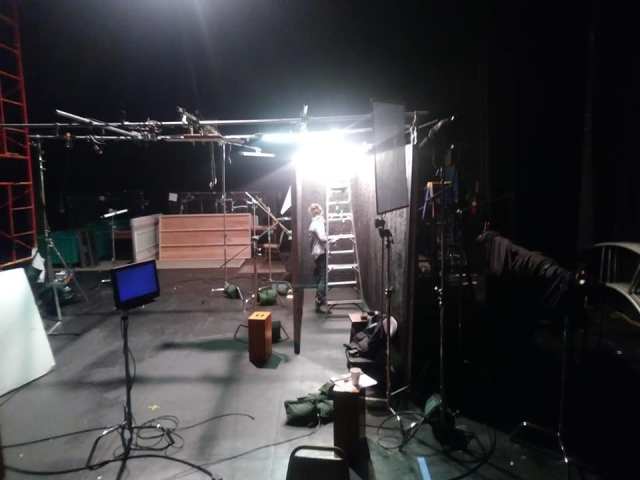 No wonder I look even more concerned in this selfie…

And finally, in this shot below, how did the wallpaper design get to be so huge behind me?

How did we do that?  What’s going on here?