Posted on December 9, 2018 by dannyashkenasi 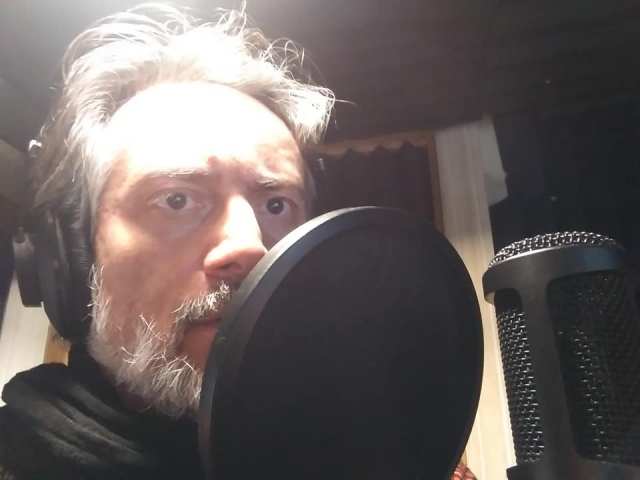 Listen to this.  It’s rather creepy, isn’t it, not just because of the unsettling nature of the text, but because of, well, I’ll explain later, just listen now:

I kept quite still and said nothing.

For a whole hour I did not move a muscle,

and in the meantime I did not hear him lie down.

He was still sitting up in the bed, listening; –

just as I have done,

hearkening to the death watches in the wall.

It’s by Edgar Allan Poe, a selection from “The Tell-Tale Heart – a musicabre“, my musical adaptation of the Poe short story about the murderous roommate, which I am turning into a short film, currently in preproduction.  Hence the recording of my vocals, including the spoken sections.  Even if my vocals will also be recorded on set, or later again in post, it is necessary to record all vocals, sung and spoken, as part of the film’s pre-production.

In my adaptation of The Tell-Tale Heart, I adhere very faithfully to the original Poe text throughout, with only occasional minor adjustments.  The words here are unadulterated Poe, and one of the few moments of pure speech in the piece.  Usually I am singing, or alternating speaking with singing, and the three cellos are playing their alluring, alarming accompaniment…

But for this moment, a moment of stillness and dread, right before the murder, the deadly calm before the storm, so to speak, I decided when adapting “The Tell-Tale Heart”, this moment, this paragraph, would be the longest, most self-contained section of pure speech, nothing sung, no cellos, right before launching into the musical centerpiece called “The Groan of Mortal Terror”:

So I recorded myself speaking the text.  In fact I recorded five takes of myself recording this text.  Maybe one of those five takes will end up in the film, maybe a later attempt at the text will.

But for now I have these five takes, and quite by accident I heard all five play out at once after I uploaded all the recording materials from my studio sessions onto my laptop.  And because I was unconstrained by bar measure and musical entrances in recording my takes on this text, there is some variety in the timing of the words from take to take.

It makes for interesting cascades and echoes of phrases.

It’s rather eerie, isn’t it.

Rather suitable in an abstract, awful way to the foreboding nature of the text.

Ending repeatedly, including one final isolated time, with the phrase “hearkening to the death watches in the wall”.

Hearkening to the death watches in the wall.

And a unique Tell-Tale tidbit in itself.  Even if one of these five takes makes it into the final film, this particular audio experience will not be part of “The Tell-Tale Heart – a musicabre”.

This macabre audio experience is my little stand alone Tell-Tale appetizer, an amuse-bouche, or rather, terrifie-bouche, if you will, before the main event.

Give it another listen, why don’t you.