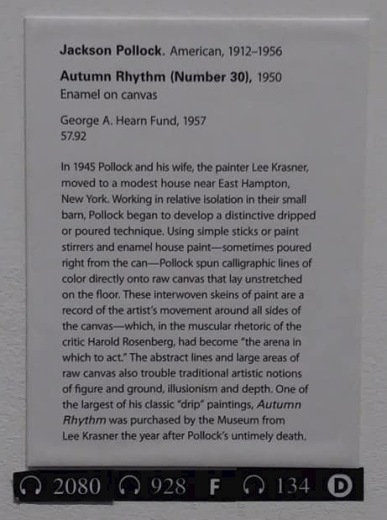 I’ve never ingested LSD but I imagine this is the closest I’ll ever get to an actual acid trip.

It is not an experience I get from looking at reproductions of Jackson Pollock paintings.  Perhaps because these can not duplicate the dimensions of the original.  Or perhaps the tactile nature of the paint on canvass needs to be experienced in person too. 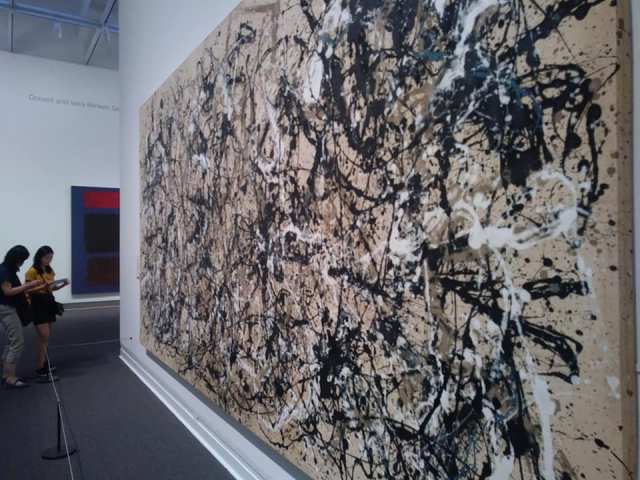 I am not sure I can adequately describe the experience, or why it only happens to me in front of a Jackson Pollock drip painting.  But here it is:

I sit or stand in front of the painting and examine it like any other abstract work of art.  The eye inevitably wanders along the swoops and arcs and patterns of paint on the canvas.

But eventually my gaze rests and finds a spot in the painting to focus on.

Or rather focus through.

My gaze zeroes in on a spot of unpainted canvas.  Like I am looking at the “background” behind the “foreground” paint elements.  Eventually the paint itself goes just slightly out of focus, or I imagine it does, as the painting takes on a deepening three dimensional aspect in my sight.

And then the painting swirls and blobs begin to move.  They swim.  They wave.  They shimmy.

It’s as if I am diving into the art and the paint rivers and clouds are floating about me, skimming the surfaces of several atmospheric levels. 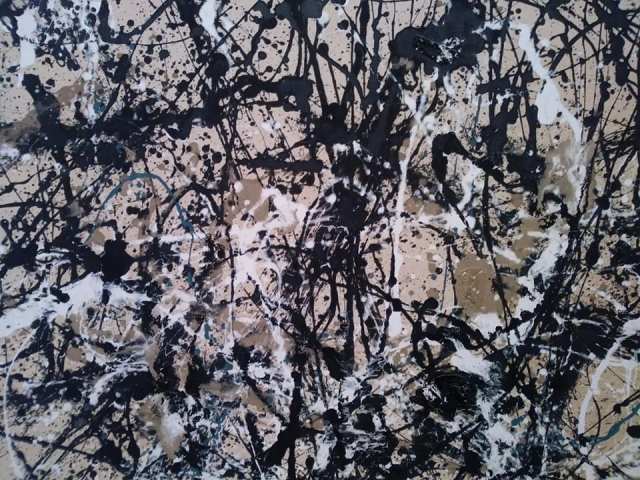 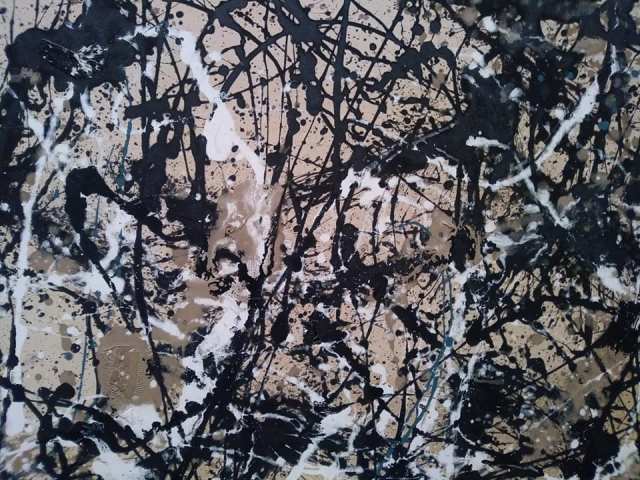 The first time I experienced the Jackson Pollock effect was when I attended an exhibition of his work.  I’d gone more out of a sense that this is something I should see but not something I was likely to enjoy.  I was not the greatest fan of 20th century abstract painting.  I expected to aquire a greater intellectual appreciation of a modern innovator of form, but to be likely left emotionally indifferent by the results.

Yet by the finale of the exhibition, where a great many of the Pollock’s famous monumental drip paintings stretched over wide expanses, I found myself standing before one or the other, and in front of those that most iconoclastically represent his drip technique, having the dream like experience I describe above.

Actually that first time it went even further.  I got lost in time and space. 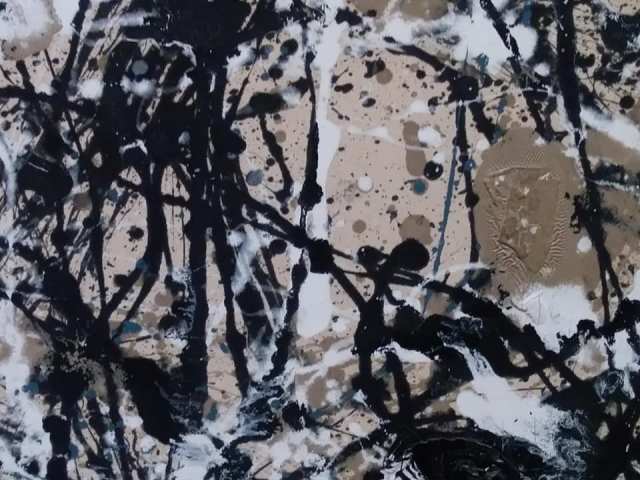 That first time I “dove” into the painting as I’ve described, but I remained inside longer than I allowed myself this Sunday.  Until the painting was all I experienced in my vision or mind’s eye.  It was a dream or a form of hypnotism.  I was inside the painting, one with red and yellow drippings and blue and grey splotches I recall, and the streams and droplets of color were undulating all around me like a vines in a jungle or kelp in the ocean.

The museum was gone, I was floating inside a vast universe of yellow red strands and swirls within a hazy blue grey atmosphere.

After what I believe was 5 minutes I “awoke”.  And found myself back in the museum gallery in front of the painting.  Nonplussed.  It was all rather wonderful.  And disconcerting.

I had clearly emerged from a Jackson Pollack induced trance. 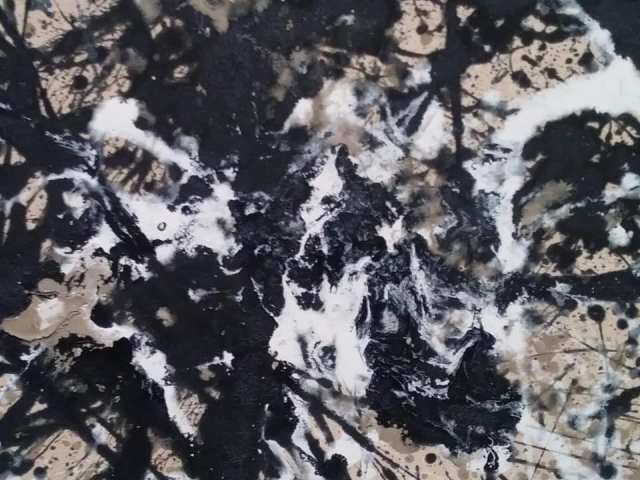 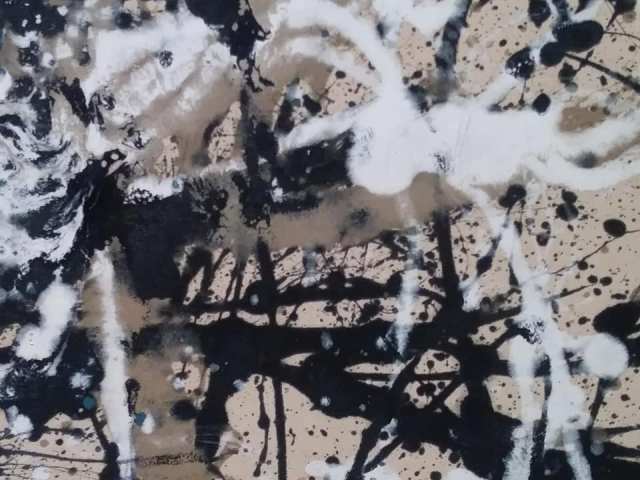 My “trips” this Sunday were not as dramatic, limiting themselves to skimming a gentle stereoscopic dance of paint swirls, not dunking into a deep dream immersion, but there were distractions around me.  A young boy was impatiently stamping his foot and whispering truculent Japanese phrases to his father (they can be seen on the right bench in the photo below).  That kind of got in the way of the meditative state.

So I tried to take pictures that take you inside the painting.  Like I said, a reproduction can’t capture the immersive power of a Jackson Pollock in part because no image on page or screen will reproduce its monumental size, nor the tactile nature of the paint layers.  Maybe close up views of details can have an effect?  From the middle distance; and then even closer?

No, they don’t reproduce the experience of being there in person.  Even if you don’t share my suggestibility to drip paint induced hypnotism, you will still find that a Pollock has properties that can only be fully appreciated in person, perhaps more so than for any other painter.

But perhaps these detail pics can claim a certain power of their own.

I let my instincts guide me as I roamed the painting, finding details to frame.

Perhaps a particular detail here will allow a vicarious immersion that a simple reproduction of the whole can’t.

I will also share these photos I took at the Met Museum exhibit of photos taken at African American portrait studios in the mid 20th century.

There’s something fascinating about how the photos are displayed on two sides of glass panels, allowing for full on views of photos and museum patrons simultaneously.

You’ll see my husband Ed as well as the artist Jon Bunge among the captured patrons. 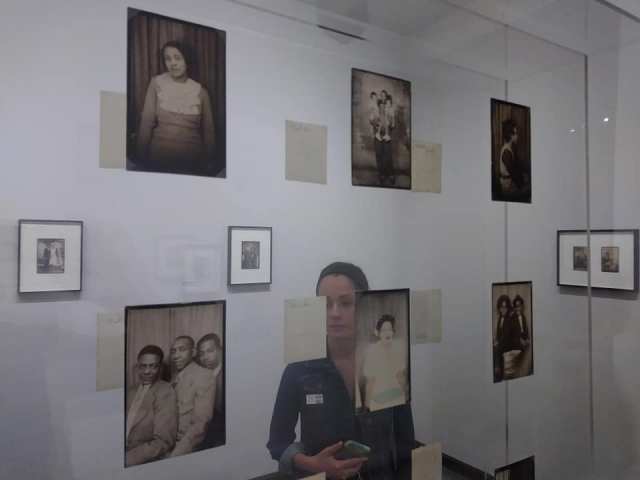 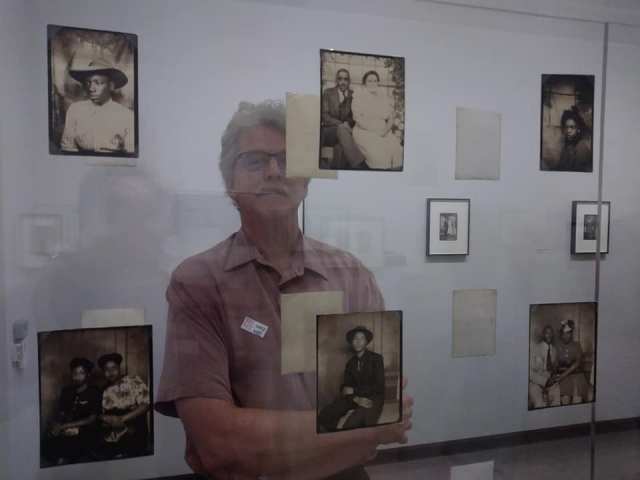 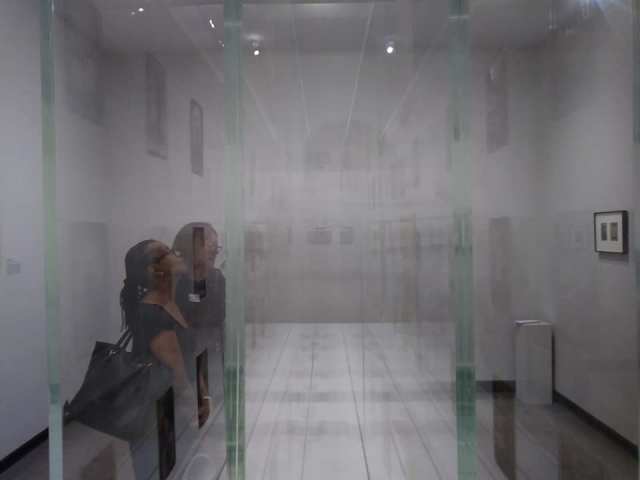 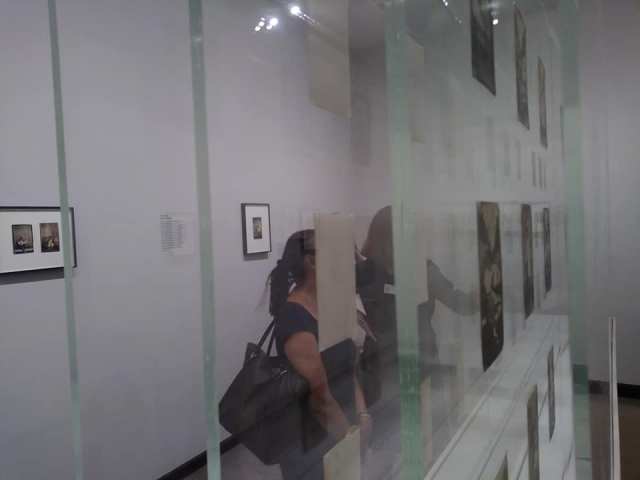