Posted on February 17, 2018 by dannyashkenasi 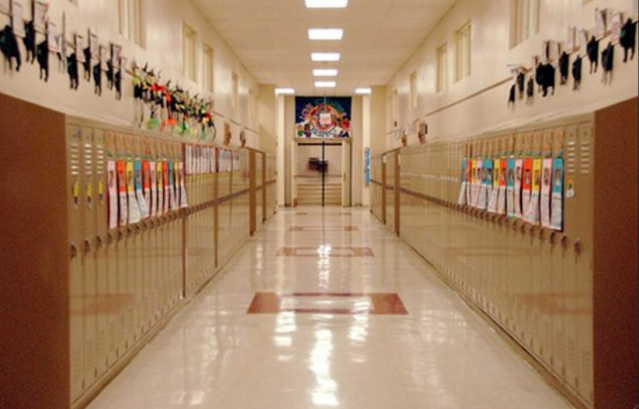 A few months ago I was conducting a third grade choir class in a Tribeca school, when an alarm sounded.

“Lockdown”, one of the two classroom teachers in the room with me and 25 third graders announced.

Swiftly, and calmly, the children congregated in a group sitting on the floor in a blind spot corner of the room, not visible from the door.  One teacher took a key out of the classroom’s call box and locked the door from the inside.  She also taped blank sheets of paper over the door’s window.  Then she joined the rest of us in the blind spot.

I sat still in a chair.  In decades of being a teaching artist all over the New York metropolitan area, I had been part of numerous fire alarms, all of them drills.  But this was my first lockdown alarm.  And whereas in a fire alarm one calmly lines up the students and walks with them down the hallways and stairways out of the school, onto the street, and at least a block away from the building, in this case the procedure was to collectively cower quietly and out of sight in a hidden corner of a locked room.

I assumed this was just a drill.  But I didn’t know.  I thought about asking the teachers if they knew a drill was planned for today.  Sometimes school administrations give advance warning of drills, sometimes they surprise the community to test the response.

But I decided just asking the question could cause anxiety.  I felt my role was to be calm and collected and look unworried.  My ignorance and inexperience would go unaddressed.

The children looked remarkably calm and patient.  The teachers looked calm and serious.  There was also a quality of discomfort under their professional demeanor that may have come from feeling anxious or angry.

I first thought how odd it was that such a lockdown drill was taking place in a New York City school.  Wasn’t this exercise an overreaction?  And the kind of thing that would be undertaken in the heartland of the country, not here in cosmopolitan NYC?  Then I remembered that Sandy Hook Elementary School is only 30 or so miles away.

I assumed that, of course, this is a drill.  Still I found myself listening carefully to any sounds out in the hallway.  I wanted the ongoing silence to confirm my assumption.

Thoughts of Sandy Hook stayed with me.  I felt a rising panic in my guts.  In all my experience of fire drills, including many that were unscheduled and might have been for real incidents, I had been calm and untroubled.

But now I felt a bubbling up of terror in my stomach.  Rising tremors of wordless fear.  I had to work to get the feeling under control, not allow myself to show the anxiety that wanted to paint itself on my face, not allow the tears pressing behind my eyes to emerge.

There was no way I was going to indulge in panic in front of the children.  I suppressed the fear, and with outward calm waited out in silence on my chair away from the classroom door, while the teachers sat quietly on their chairs, and the children sat quietly in a crowd on the floor.

Finally the all clear was signaled, one teacher directed the children back to their choir rehearsal chairs, the other went to unlock the door and remove the taped paper from its window, and I took my place in front of the keyboard and continued to teach “Mas Que Nada”.

Later I asked one of the teachers about the lockdown drill, telling her that it had been my first, and confessing it took me by surprise.  I was told these drills were incorporated into the school culture a year or two ago.  I was also instructed how to find the key to lock the door.  There really should have been special white boards to put over the window, I was told, but these were missing in the music room, which is why the teacher taped up sheets of paper.

Later I talked about the incident with the school arts coordinator and then again with my husband.  I could tell by how my voice tended to quake that the whole thing really rattled me that day.

And now the horrible school shooting in Marjory Stoneman Douglas High School in Florida has brought back thoughts of my five minutes in lockdown.  And how my original dismissal of such drills as a regional overreaction gave way to a begrudging acceptance of them becoming part of school culture all over the country.

But like so much else done and said and thought and prayed in response to yet another mass shooting, yet another school shooting, what good does the lockdown drill do?

Sandy Hook’s front doors were bolted shut, but the assailant had the weaponry to blast his way through.  Marjory Stoneman Douglas High School went into lockdown mode and still 17 individuals were killed.

During my lockdown drill, I wondered what this was teaching our children.  A fire drill teaches protection from a natural danger.  A lockdown drill normalizes the possibility of mass murder.  Like going into bomb shelters during the London Blitz.  Like duck and cover drills during the Cold War.  Mass shootings have become so regular that we must somehow live with their reality not as a shocking aberration but as a regular terror incorporated into our daily lives, the way we keep fire extinguishers in our kitchens, and seat belts in our cars.

We are teaching our children that this is the new normal of their lives.  It will happen, again and again, and apparently, it is more likely to occur in their school than an actual fire, and more likely to be deadlier.  And apparently, the adults in our children’s world who have the power to do something to prevent these events from repeating themselves with ever escalating deadly regularity, these adults offer no more than thoughts and prayers and the admonitions to not politicize a tragedy.

Only in the USA, of course.  Among advanced Western nations, as they say, this particularly sickening part of daily life is unique to our great country.  A horrid feature of American exceptionalism.