Posted on December 4, 2017 by dannyashkenasi 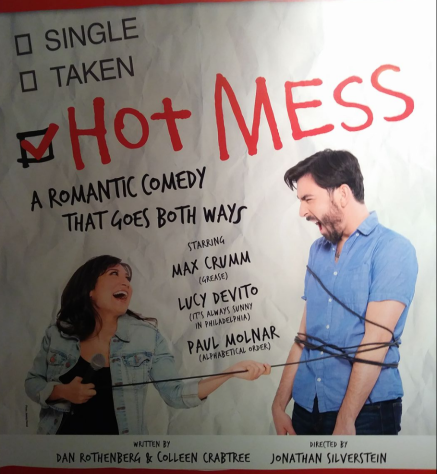 By a quirk of timing I wound up seeing two days in a row the two stage plays currently playing in New York (Off Broadway) that deal at any length with male bisexuality.  And as I wrack my brain about all the gay themed plays I’ve seen in New York over the past 30 odd years (and I have seen very many) it is possible I have just seen the only two Broadway or Off Broadway plays that deal with male bisexuality at any length with any depth.  And this has made me feel conflicted and peevish; and so here I am writing yet one more blog piece on bisexuality, specifically male bisexuality on stage and screen.

“Hot Mess”, currently in previews, is the “labor of love, and completely true story” Dan Rothenberg co-wrote with his wife Colleen Crabtree.  Now performed by a cast of three, the comedy romance about a bisexual man not telling the woman he is dating about his history of sleeping with men was originally performed by Dan and Colleen as a two person show called “Regretosexual” in LA.  (That bit of info about the writers being husband and wife now probably gives away the ending, doesn’t it?  High time I forewarn that particular spoilers will abound for all plays and movies I discuss here today.) 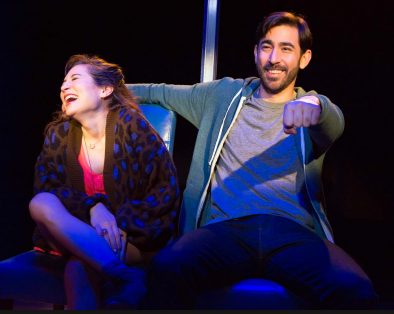 The playwrights’ bios already clued me into the strong likelihood that a message of love and acceptance and inclusivity would conclude this charming play very much designed for a mainstream audience.  But the original title also telegraphed ambivalence or worse about the lead character Max’s homosexual history.  And so it was.  I experienced much of the first 3/4 of the play feeling mildly aggrieved while the hero keeps postponing telling his girlfriend about his gay experiences, revealing a conflicted uncomfortableness with his sexual past.  This culminates in a brutal freezing out of a friend and former fuck buddy when he accidentally runs into him while on a date with the girlfriend.  The worst stereotypes about bisexual male secrecy, inconstancy, and untrustworthiness were looking to be fully justified, thank you very much.

“Hot Mess” to be continued, but let me skip on over to the next day watching the excellent production of “Torch Song”, reviving an edited version of Harvey Fierstein’s classic 1981 play “Torch Song Trilogy”.  I’d not seen the original production but I do know the movie version.  The depiction of Ed, who leaves the Harvey Fierstein stand-in Arnold for a woman (before returning to him in Act 3), to some extent plays very neatly to 1970s/1980s gay male stereotypes about bisexual men really just being gay men who aren’t honest with themselves. 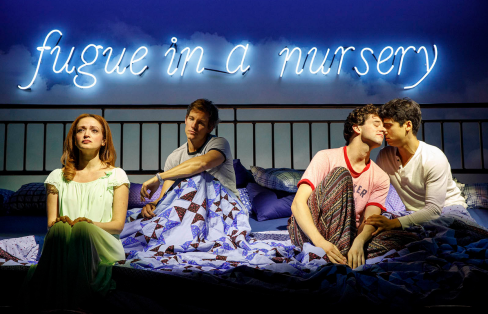 Ed may be somewhat more forthcoming about his sexual history with both Arnold and his future wife Laurel than Max is during most of “Hot Mess”, but that doesn’t make Ed’s true feelings easy to pin down since he seems so slippery about them even to himself.  And then the play stacks the sexual deck against Ed’s heterosexuality so much – Ed comes to orgasm with Laurel only when he kisses her neck and thinks of Arnold; Ed almost acts on fantasies of suicide because he is so fearful of coming out; Ed ‘s desire for a family and pleasing his parents are more forcefully stated reasons to marry Laurel than his love for her – that he comes across more like a deeply conflicted, self-deluding homosexual than a true bisexual.  But then again, wasn’t (or isn’t that still?) the belief of most gay men of that era (and still?) – there is no such thing as truly bisexual men?  Just gay men not being honest with themselves?

By the intermission I was fuming with indignant rage.  Why must Ed’s bisexuality be so vilified, to the point of being denied as even being real?  Where are the plays that affirm and celebrate and go to the ramparts for male bisexuality in the brilliant way “Torch Song Trilogy” did for male homosexuality in its day*?  It’s 2017 and I can not think of any play since 1982 that even deals at length with male bisexuality except for the one I just happened to see the day before.

“Hot Mess” of course climaxes with Max finally telling his girlfriend Elanor about his bisexuality, and it wouldn’t be much of a drama if this revelation at this late stage in their relationship didn’t set off some major theatrical earthquakes.  It is however to the play’s credit that Elanor has a slew of complications and trigger points in her own back story, and it isn’t his bisexuality by itself that sets off the climactic dramatic tremors.  Still, once the truth is revealed, the happy end is perhaps rather too swiftly come by from a dramatic point of view, although I was pleased that the focus was kept on individually nuanced feelings and honest understanding rather than general handwringing about bisexuality.  I had tears streaming as the final scene tosses the couple years into the future, with Max at their son’s bar mitzvah openly recounting his full sexual history as a “how I met your mother” speech to all assembled guests, urging his son to love freely whomever he chooses. 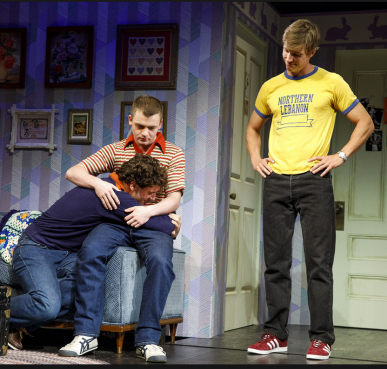 Max now is honest and open about his full sexuality and sexual history and everyone can be happy.  In the third act of “Torch Song”, Arnold makes Ed not hiding their relationship to his friends and family a condition of them getting back together again.  Fair enough. But even better, Arnold’s gay foster son David then figures in an unexpected scene that did not make it into the movie version of “Torch Song Trilogy” (but I assume was in the original play).  David challenges Arnold to see Ed for whom he is rather than insisting he is a “closet case” and questions whether Arnold would ever be accepting if David brought home a girlfriend; might he react as intolerantly as Arnold’s mother does about Arnold being gay?  This scene of the next generation of queer men challenging the assumptions of the previous generation presciently foreshadows the greater acceptance of bisexuality and sexual fluidity to come.  The sting of biphobia I was feeling at intermission was somewhat (if not fully) salved by curtain call.

The paucity of bisexual male role models on stage troubles me.  On screen I find a little more solace, but not much, since I have to reach back to 1972’s Cabaret to find Brian, one of the few fully rounded, sympathetically drawn male bisexual characters in film.  But even here it is implied in the dialog that follows Sally’s abortion that it is not just her inability to domesticate but also Brian’s homosexuality that would have doomed their fantasy of blissful family life.  Again, bisexuality as an obstacle to happiness. 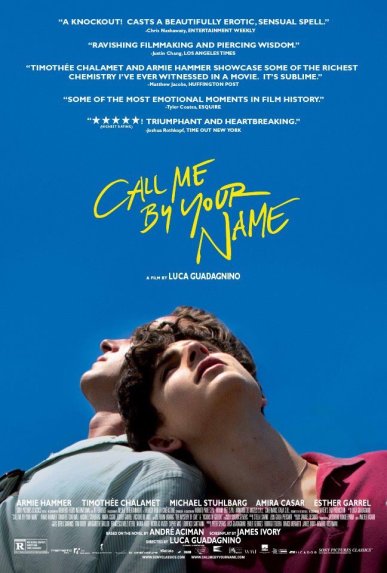 Fast forward back to 2017, now playing in the movies is the highly celebrated gay romance “Call Me By Your Name”, which clearly dramatizes male bisexuality (remember, my warning about spoilers still holds).  Teenage Elio has (enjoyable) sex with a girlfriend as well as with the grad student Oliver.  Oliver himself turns out to have a girlfriend back in the States to whom he will become engaged.  And in a widely lauded speech at the end of the movie, where Elio’s father urges Elio to embrace the love he has found and the hurt he may feel after, it is strongly implied that Elio’s father too once had (and regrets not acting on) a major same sex attraction in his past.  The words bisexual or homosexual are never used in the movie or the book to describe Elio, Oliver or the father.  But bisexuality permeates all three characters, and happily without judgement.  To me that is incredibly affirming, and yet, maybe I am still grasping at narrative table scraps in my desire to see male bisexuality affirmed in our culture.  In a to me dispiriting conversation with my husband Ed, we explored how easily it would be for anyone to view all three male lead characters in “Call Me By Your Name” as gay men using heterosexuality as a strategy or shield to better survive in the less open 1980s, but not actually in their essence fitting on any spectrum of bisexuality.  Once again the impulse to define “true” sexuality in the binary, in the either/or, stakes its claim.

And so it is that bi erasure may continue even when viewing works of art replete with bisexual behavior.  To my horror, it occurs to me that even my own big bisexual musical “Speakeasy” could fall prey to such interpretation.  The word “bisexual” is never used, it would be historically inaccurate in a musical set in the Roaring Twenties.  The lead couple, newlyweds John and Jane Allison, have opposite sex and same sex erotic experiences; but in the end of the play their vow – and the story’s moral – is to be honest, to “speak easy” with each other about who they are and the love(s) they feel.  The couple doesn’t discuss sexual labels.  I purposefully leave it open-ended as to whether John and Jane’s relationship will survive the revelation of same sex desires, or exactly where on the sexual spectrum Jane and John lie.  Of course, because I see myself in the middle of the spectrum, and am happily in a life long committed relationship, I imagine and wish the same for Jane and John.  But that’s for me personally to speculate after the final song, the audience is given enough freedom to speculate differently.

And I ask myself, if audiences can choose to deny Elio, Oliver and Elio’s father their bisexuality, insisting that homosexuality is their true identity and all else is facade, then they may possibly make the same interpretative claim for John and Jane.

No wonder I am feeling peevish. 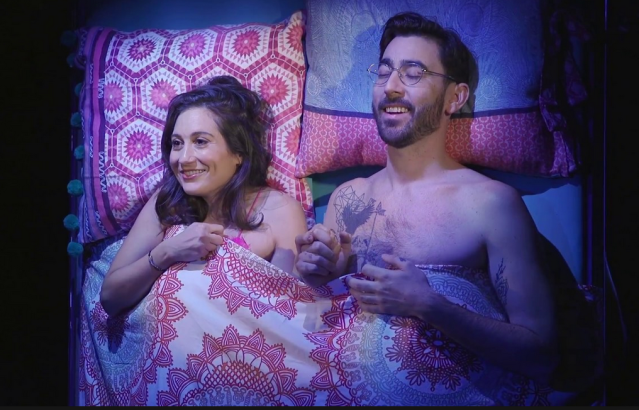