How this young chum came to the Cabaret

“Life is a cabaret, old chum, come to the cabaret”

This Christmas one of my “stocking stuffers” from Ed was the gift that thrilled me the most this holiday season: a (battery operated) votive candle with an actual screen cell of Liza Minnelli singing the title song from the movie “Cabaret”.   I don’t pray, and I wasn’t raised Catholic, but I am tempted to use this votive candle as a way to make daily obeisance to the musical gods.

I could go on and on about what makes “Cabaret” not only one of the great movie musicals of all time but simply one of the great movies of any time, period (and I will probably come back to wax happily on various aspects of “Cabaret” in many future posts). It richly deserves every one of the 8 Academy Awards it received, and probably would have won 9 and not earned the distinction of being the movie that won the most Oscars without winning Best Picture if 1972 had not also been the year of “The Godfather”.

German TV showed “Cabaret” soon after its theatrical run. I don’t remember exactly how old I was when I first watched “Cabaret” curled up on a couch with my parents in our West Berlin basement TV room, probably with the fireplace crackling, but I must have been pretty young, because I remember it as the movie that first introduced me to many adult concepts about history and sexuality.

If “Cabaret” wasn’t my movie introduction to Nazis and Anti-Semitism and the history of the Nazis coming to power in the 1930s, it surely was the one that prompted my first questions to my parents about these concepts, seeing how deeply and intractably they effected all of the movie’s characters. And if “Cabaret” wasn’t my introduction to the concept of homosexuality, surely it was at least the introduction to the concept of bisexuality, as I clearly remember asking my parents to explain this explosive exchange between Sally (Liza Minnelli) and Brian (Michael York) about their rich friend Maximilian (Helmut Griem):

Actually, I first heard this exchange dubbed into German (here recalled from memory):

(I would watch “Cabaret” in German many many times, wearing out the Betamax video copy we had made when it aired on TV. I didn’t see “Cabaret” in English until I moved to America, although thankfully in the German version the songs were not dubbed, the German “Synchron-dialog” was smartly adapted and the voice acting was of a high standard, aided by the fact that many of the secondary actors, including co-leads Helmut Griem and Fritz Wepper, spoke German and dubbed their own performances.)

My parents explained to me the nature of Brian, Sally and Maximilian’s sexual relationship in a basically age appropriate way, and I then understood the subtext of the many awkward silences between the three characters better, or at least felt its import more deeply. I would not recognize that I myself was bisexual until I hit puberty.  Michael York as Brian will forever be the original emblem of bisexual male to me.

Sidenote: I had the privilege of spending a summer with the debonair actor Helmut Griem when I was thirteen. My older brother David (in one of his few acting gigs before he turned his attention completely to studying physics) was cast as Mr. Griem’s son in the family dramedy “Stachel im Fleisch” which was filming on the island of Sardinia. My parents and I joined my brother to spend our summer vacation in Sardinia and act as extras in a couple of beach scenes.  I remember Helmut Griem as a sweet, slightly melancholy man (my parents told me he was going through a divorce). He was kind to thirteen year old me (who tried not to act too star stuck, considering this was the handsome movie star from my very favorite film), treating me as a conversational peer during evenings spent shooting the breeze with my folks and movie cast and crew on the terrace restaurant of the hotel that lodged us all.

Like I said, I would watch “Cabaret” over and over again on our Betamax. Then I got to see it for the first time on the big screen at the local Bali movie theater, when they screened a print one weekday evening. I made a startling discovery. Two scenes were missing. The risqué “Two Ladies” number and “Tomorrow Belongs to Me”. The print I saw in the movie theater was from when the film was released in German theaters in its original run. And at that time it evidently had been decided that these two scenes needed to be excised for German audiences.

Joel Grey and his Two Ladies 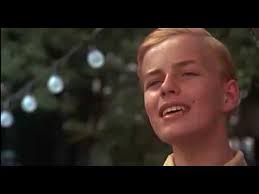 “Tomorrow Belongs to Me”

More interesting was the decision to excise the “Tomorrow Belongs to Me” number. It depicts a sweet faced blond tenor singing a lyrical ode to the German landscape in a German beer garden. As the camera pans back we realize the young singer is in a Nazi uniform. The song grows in urgency and one by one the Nazi youth is joined by the patrons of the beer garden. The rousing climax of the song is a stunning musical and cinematic illustration of the pull Nazi ideology and iconography had on the German populace in the 1930s. But there is no violence or sexuality in the images. Nothing that would normally rouse the censors. Was this scene cut because the movie distributors feared what effect it might have in cinemas in Germany in the early 1970s? And exactly what effect were they anticipating?  Did they fear some movie patrons might rise and sing along?  I don’t know. I do know by the time “Cabaret” aired on German TV just a few years later, both scenes had been wisely reinstated.

Oh, I could go on and on about “Cabaret”. I will be banging the drum about what makes it such an extra-ordinary musical and movie all my life (and will surely focus on many aspects of its incredible artistry in many future posts). Besides being a great movie with a great score, how could it not leave such a deep imprint on me when it deals so indelibly with so many themes important to me: music theater, performing, Berlin and its fraught history, Americans in Berlin, being Jewish in Germany, bisexuality, bilingualism… It’s a great work of art, even more deeply felt as such because of the many personal connections it made for me at a very young age.

So, having a votive candle to light to its brilliance is for me eminently appropriate. Or rather, perhaps it is, to quote Sally Bowles, “divine decadence”.

2 Responses to How this young chum came to the Cabaret