TONI ERDMANN Finds The Greatest Love of All

Posted on January 7, 2017 by dannyashkenasi 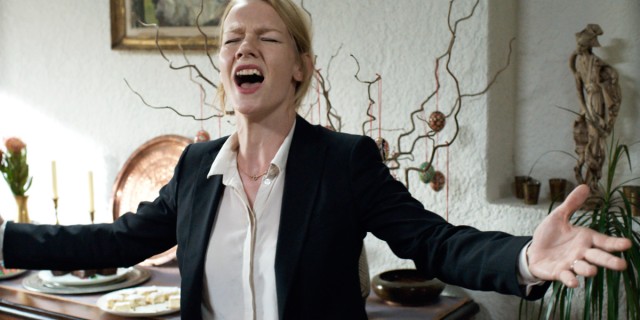 I finally saw “Toni Erdmann”, which A. O. Scott in the New York Times calls “by a wide margin the funniest almost-three-hour German comedy you will ever see”, which swept all the top awards (Picture, Director, Actor, Actress, Screenplay) at the European Film Awards this year, and if all things (as in English language and non-English language films) were equal at the Oscars, really should at least be nominated in those same Academy Awards categories, and not “just” hold the front runner position in the foreign language film race.

A.O. Scott, one of the best reviewers smartly and specifically writing about a movie without spoiling it by giving too much away, describes “Toni Erdmann” both as “a thrilling act of defiance against the toxicity of doing what is expected, on film, at work and out in the world” and “most simply but also most elusively, a sweet and thorny tale of father-daughter bonding”.  It also happens to bring that chestnut of ballad bombast “The Greatest Love of All” back to the movies where it originated, possibly elevating it to a higher plain in the process.  “Toni Erdmann” doesn’t save the song from the guilty pleasure cringe factor that envelopes it; in fact it ruthlessly takes advantage of the cringe factor for comedic effect.  But just how throughout the movie embarrassing and absurd situations are played within the rhythms of uncomfortable naturalism rather than classic farce, thereby mining honest feelings and truths, so does the movie’s absurd performance of “The Greatest Love of All” render the words and message of the song more poignant, more meaningful than ever before.

That “ever before” didn’t begin with Whitney Houston but nearly a decade earlier with Muhammad Ali and George Benson:

Songwriters Michael Masser and Linda Creed wrote “The Greatest Love of All” for the 1977 bio-pic about Muhammad Ali “The Greatest”, which more than partly explains why the lyrics insist “learning to love yourself, it is the greatest love of all”.  It only takes a cursory knowledge of Muhammad Ali’s life, career and struggles to see how much of the song’s lyrics fit all too well in his biography:

I decided long ago, never to walk in anyone’s shadows
If I fail, if I succeed
At least I live as I believe
No matter what they take from me
They can’t take away my dignity

George Benson recorded the vocals for the song, which plays over the movie’s end credits, and was a modest hit as a single (peaking at #24 on the US charts).  It is of course Whitney Houston’s cover that became the huge hit that defines the song nowadays in popular consciousness.  However the recording was not initially considered a hit track by the record company.  It was exiled to the B-Side of her first single “You Give Good Love”.  Yet after radio stations started playing it too, Houston’s Greatest Love of All was released as a single and became her then biggest hit (at least until she sang that other great “Love” behemoth “I-ee-ay-ee-ay Will Always Love You-u-u-u-u-u”).

I’ve always had a complicated relationship with the song, starting with the original George Benson version.  I understood the underlying positive message that in order to love well and live well you must be able to love yourself, have self worth (see full lyrics at bottom of this post).  And nurturing children to find the “beauty they possess inside” is a good thing.  However the lyrics never specifically talk about loving others well.  Instead the narrator claims “I never found anyone to fulfill my needs; A lonely place to be; so I learned to depend on me.”  When the song then dramatically, and in Houston’s case even bombastically, asserts loving yourself is the greatest love at all, one can be excused for fearing that we may be crossing over into a more vainglorious, even narcissistic form of love.  There is self esteem, and then there is sociopathic self-regard, as a recent unpopularly elected political figure demonstrates.  Of course, my therapist husband reminds me that that kind of narcissist doesn’t really love itself, and surely was not taught as a child to nurture positive self esteem, but on the contrary is a black hole of desperate need for love that can never be filled exactly because he is not capable of true self-love, only monstrous self-regard.

Oops, got a little side-tracked there.  Back to the song and back to “Toni Erdmann”.

Now I am going to talk a bit about how “Toni Erdmann” takes advantage of the kitsch and cringe factor of “The Greatest Love of All” while also rescuing and elevating the message of the lyrics.  And I will include a clip of the scene from the movie that in itself shows how “Toni Erdmann” finds both the absurdly funny and honestly poignant within the cringe.  BUT, I do believe the full effect of this is best experienced within the context of watching the whole movie.  “Toni Erdmann’s” individual scenes are strong in of themselves – and there are reports of audiences exploding in gut-busting convulsions of laughter at a scene that soon follows the “Greatest Love” incident – but here even more so than in most comedies all that comes before with the characters and what they do and how they effect each other adds volumes of understanding and suspense that feeds each new “set piece” like a deep nourishing river.  In other words, go see the movie and then read the following and (re-)watch the clip, OK?

Back from the cinema?  I hope you liked it as much as I.  Mostly “Toni Erdmann” has been hugely popular with audiences, but like any form-busting willful work of art, it also has its detractors.  When it premiered at the Cannes Film festival last year, the critics gave it the best reviews out of all films in competition, but the jury awarded it nothing.  My husband Ed said he couldn’t join in with the guffaws bursting out all around him in the cinema because he couldn’t get over the essential inappropriateness and underlying painfulness of the characters’ behaviors.  Farce and drama make for complicated partners in “Toni Erdmann” and it is unlikely to work for all audiences.  It is a testament to the artistic instincts of the director/writer Marin Ade that the movie is succeeding as broadly as it is.

When “Toni Erdmann’s” high-powered female white collar lead is “pranked” by her father, already executing an extended alter ego joke with false teeth and a ridiculous wig, into singing “The Greatest Love of All”, she has already endured several days of being tested this way by him at her work and social functions in ever escalating ways.  As A. O. Sott asks: “Is he trying to humiliate his daughter, or to save her soul?”  “It’s very complicated” the father says himself, and the movie never makes anyone’s true motives and reasons for their actions inarguably clear.

But he is her father, and he also happens to be a part time middle school music teacher, and during the course of the movie and at this moment at the keyboard in a room full of Romanian strangers, he does in his strange way seem to be trying to teach his daughter a lesson.  A lesson about self-worth, about loving oneself?  About being a better person?  About dignity?  Surely the daughter is in danger of losing her soul and dignity to her job and life style.  And forcing her to sing “The Greatest Love of All” appears to be yet another bizarre attempt of the father to rattle his daughter into breaking out of the cage he sees she’s built for herself.  And at that point in the movie the daughter recognizes that, and also recognizes the cage.  But in being forced to sing this song about dignity she is also of course being robbed of her dignity by her father.  Yet the more her performance pushes into being a joke, shouting out notes beyond her vocal ability, the more she asserts her inalienable right to sing with conviction, with dignity.  She resents being made to sing, she sings with defiant conviction, and she may even be having a break through.  But we don’t go from embarrassment to success and smiles; she still feels pain and resentment, and leaves.  Just because her father may be now succeeding in his oddball way to “teach her well and let her lead the way, showing her all the beauty she possesses inside”, doesn’t mean that all the repercussions of the lessons can be anticipated and fully absorbed, even by him; or perhaps especially by him, as the movie will ultimately suggest.

The song’s last lines exemplify for both daughter and father the truism she needs to learn during the movie, but also the truism that effects both of them like a double edged sword at the end of the movie.  This stanza always seemed to me an odd way to end “The Greatest Love of All”, a cautionary afterthought to Benson’s and Houston’s more straightforward affirmative renditions.  Here it becomes the stinging credo at the center of “Toni Erdmann”, and it’s not a coincidence the daughter has to be reminded to sing it by the father’s insistent vamping on the keyboard; only to then have her bungle the melody:

And if by chance, that special place
That you’ve been dreaming of
Leads you to a lonely place
Find your strength in love

“Greatest Love Of All”

And if by chance, that special place
That you’ve been dreaming of
Leads you to a lonely place
Find your strength in love