Posted on October 5, 2016 by dannyashkenasi

Pink Dolphins & more in the Amazon!

(Yes, it’s a “Brazil” song double feature today, because it’s Rosemary Clooney, and because these two takes of hers on the song sound so very different, stylistically and vocally, being from opposite ends of Clooney’s career trajectory)

I’ve already posted here and here on the fantastic waterworld of the Amazon.  Today let’s get up close and personal with some of its wildlife.  In 2012, when Ed and I spent a weekend on the Urubu river, our guide Frank took us on several excursions, including a nighttime boat ride into the floating forests, where he very dexterously spotted and snatched a 3-6 month old caiman youth out of the waters. 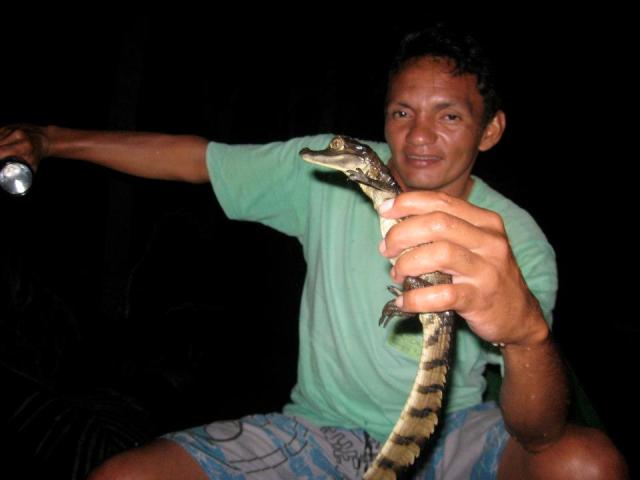 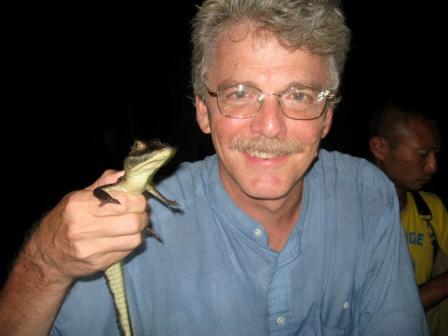 Frank allowed Ed and me to hold the little fella too.  The caiman stayed very still while in our firm but gentle grip.  Frank said at this size the “teenager” caiman was still prey to several predators.  Only as an adult does the caiman reach the top of the Amazon food chain.

Finally I let our kidnapped hostage go free by lowering him back into the river.  Only once he was in the water and sensing my grip loosen did the caiman move his arms and legs and wiggle his body back into motion and freedom.

Frank would later again showcase his excellent hunting skills by spearing a rainbow fish by flashlight.

The next day we took a rainforest walk.  This included a very close encounter with a tarantula:

In this case only Frank actually touched the animal.  With the same dexterous swiftness with which he swooped and caught the caiman or speared the rainbow fish, he snatched the tarantula and held it just so, keeping himself safe from attack and keeping the spider relatively still.

But first the tarantula had to be lured out of its nest.  Frank used an intrusive grass blade:

Once the tarantula came out of its nest, I managed to get close enough for these beauty shots: 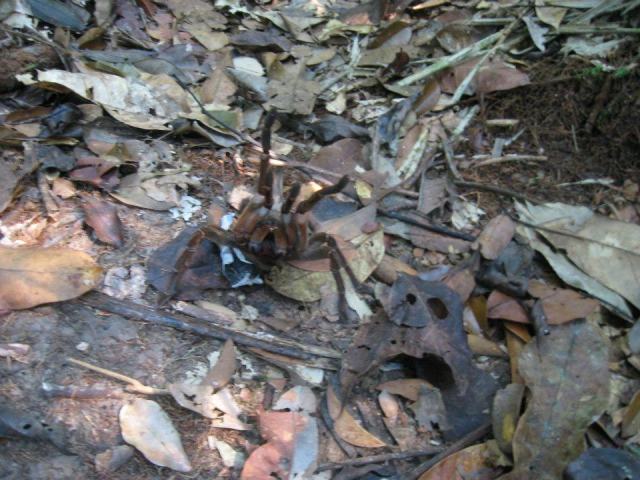 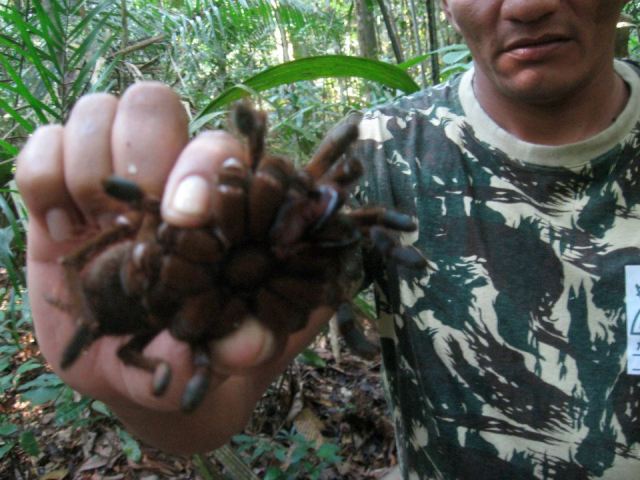 Frank held the tarantula close to our faces so we could pose with the VIP.  The third tourist in our party declined to allow the critter to get that close.  (He’d also declined to hold the caiman the previous night…)

After a few minutes of this involuntary tête à tête, the tarantula was allowed to return to its nest.

Below is a bullet ant.  The bite of a bullet ant causes 24 hours of torturous pain.  In Frank’s village, prospective bridegrooms have to put their hands into a bullet ant nest.

Frank pointed out that he has remained a bachelor. 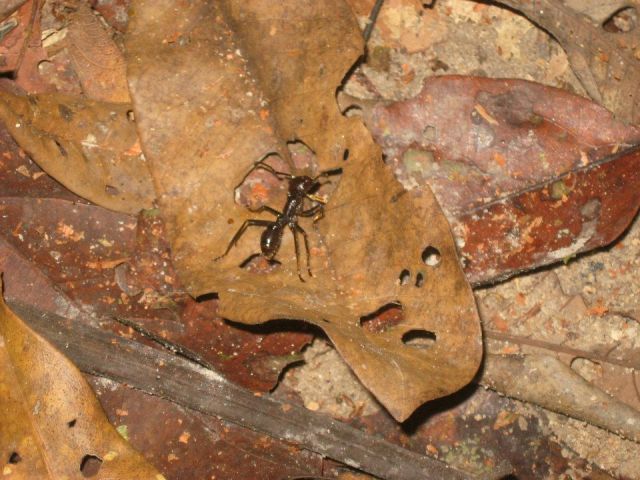 In 2016, during our second Brazil August adventure, Ed and I returned to Manaus.  But unlike 2012 we didn’t travel to a rainforest retreat upstream one of the Amazon rivers.  We took day excursions out of Manaus.  Our encounters with wildlife were thus a little more managed for mass consumption.  For example this stop on the boat excursion where tourists could pose with a large python….

…or pose with a sloth:

The sloth was handed from tourist to tourist.  Each person who held the animal got about a minute with it.  It was a bit like when a new baby is handed from relative to relative at a family reunion.  But unlike some babies, the sloth appeared to be pretty comfortable with the procedure.

At another stop on the same excursion, tourists can swim in the waters with pink dolphins, the freshwater dolphin species that populates the Amazon rivers.

This is a spot the guides use to feed the dolphins.  But it isn’t an enclosure.  The dolphins are wild.  They come to this spot to feed much like ducks would show up at the same spot by a pond where people fed them bread (back in the days before people were advised not to feed ducks bread anymore…). 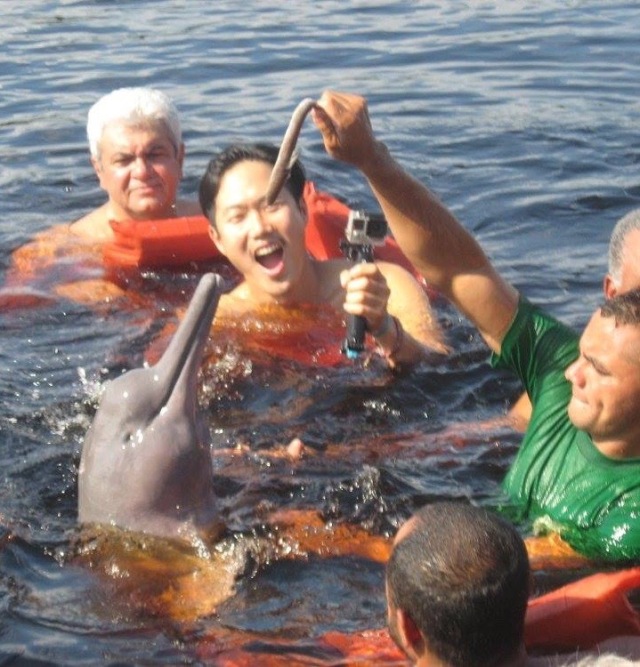 The picture below reminds me of the movie “Jaws”, with the dolphin visible just at the surface swimming towards the unseeing bathers.  (My husband Ed is the guy with the shades.)

The guide is splashing the water with the fish in hand to attract the dolphins.

Ed and I had heard varying advice about safe it is for the dolphins to be touched by human hands (because of the danger of the humans transmitting infection onto the dolphin).  The guide advised the tourists not to touch a dolphin’s head.  And so many tourists would lay their hands on the dolphin’s body as if it was bestowing a religious blessing when it majestically rose from the waters. 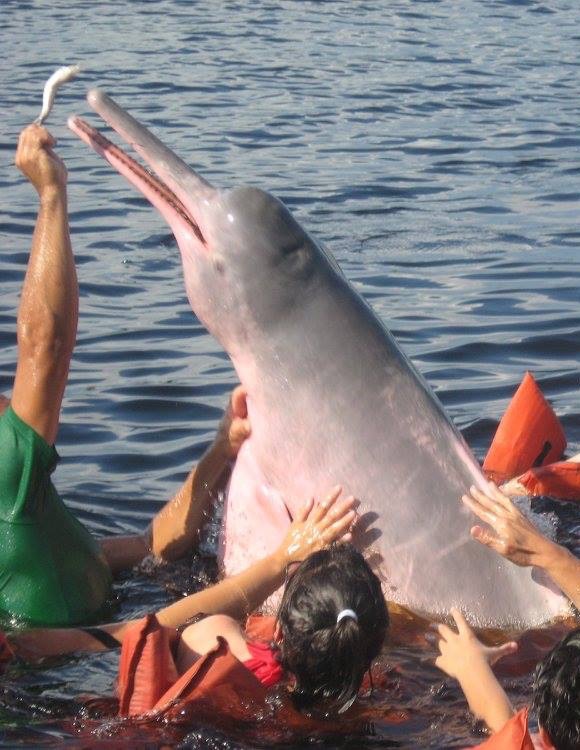