BRAZIL – The Black & Brown Waters of the Amazon

Posted on August 3, 2016 by dannyashkenasi

A dramatic photograph in a Manaus gallery shows the stark contrast of the waters of the Amazon and the Rio Negro as they meet and continue side by side for many miles without blending. 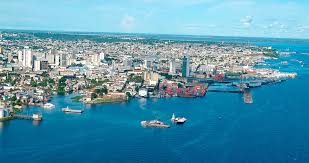 The second part of this post will take us to the waters of the Urubu River, an Amazon tributary where we spent an “Adventure Weekend” after leaving Manuas (These pictures are from our Brazil trip 4 years ago).

But first the great Black/Brown divide of the Amazon and Rio Negro at Manaus.  As the picture above, as well as the photographs I took on the river myself will dramatically show, at this juncture the waters of the two river systems meet but don’t yet blend, and flow on eastwards visibly separated by their hues side by side for many miles. 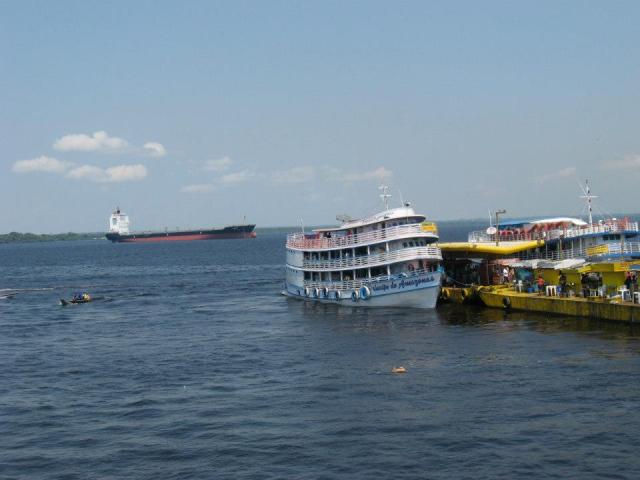 We took a public bus to a spot just East of Manaus to a port where you can take ferries across the river. 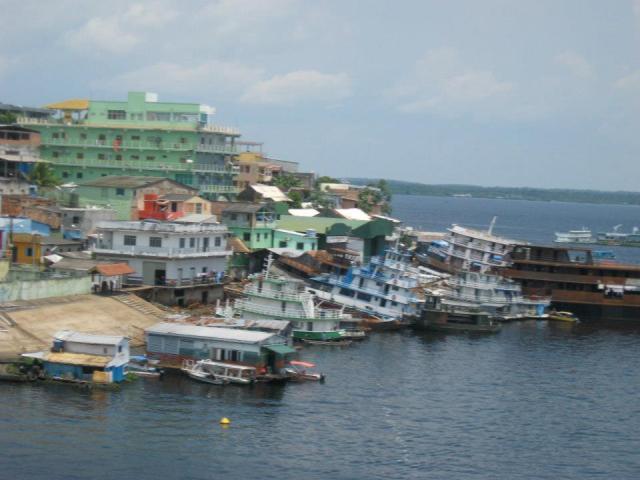 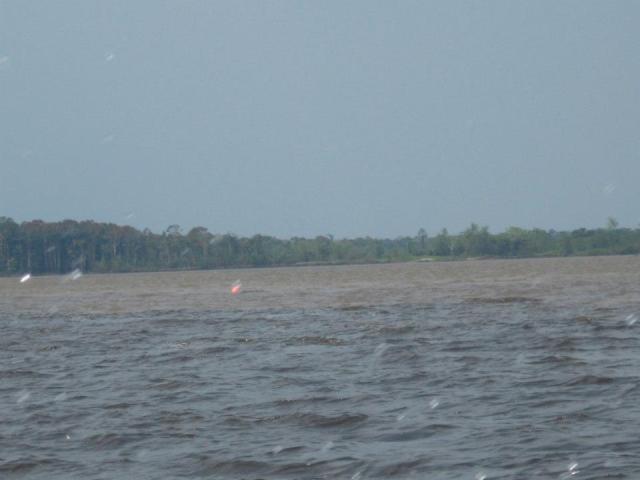 And we’ve crossed the line, and are now looking back:

8/25 UPDATE: Pictures taken from our 2016 visit to the Great Amazonian Water Divide

Today, back in Manaus, we went “private” rather than “public”; as in we took a tour boat that lingered in the brown/black water divide instead of the municipal ferry we opted for in 2012, crossing the Amazon and the Meeting of the Waters as the boat delivered passengers to opposite shores.  In 2012 I had the experience of going shore to shore.  Today I had the opportunity to linger at the Meeting of the Waters and take some more incisive pics of the brown/black water phenomenon.

The tour boat took us right where the two rivers come together, beginning a side by side division of waters that continues for 8 km before finally mixing as one. 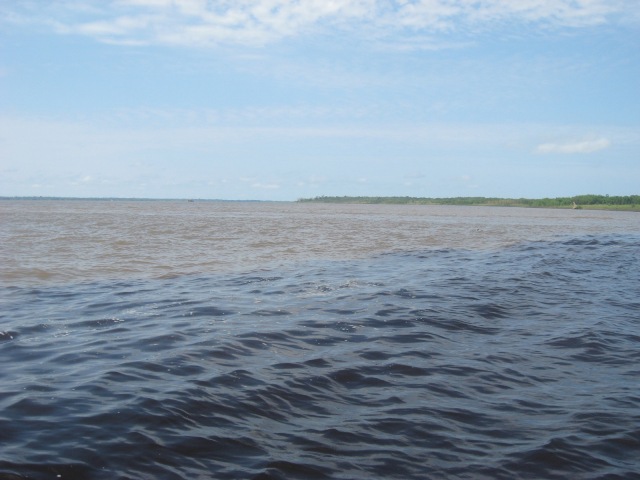 Why the division?  The short answer is density, temperature, speed…. 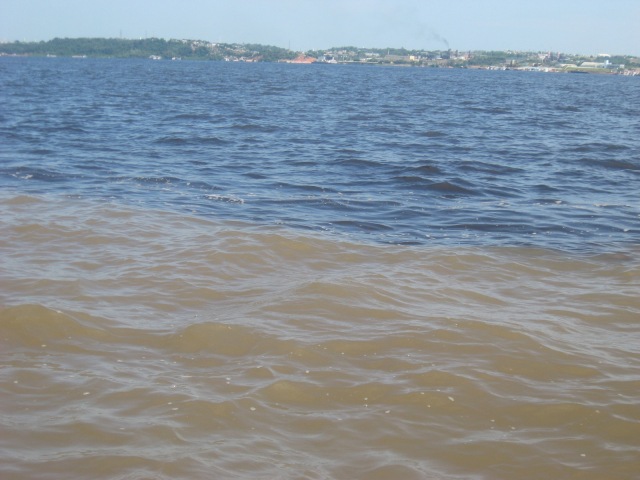 Meaning, the original Amazon source is in Peru, and from there the waters carry more silt than the Rio Negro waters, making them denser (as well as browner).  The Rio Negro waters originate from as far north as Columbia.  They are up to 4 degrees Celsius warmer than their western Amazonian cousins (they can get as warm as 35 degrees Celsius, almost human body temperature).  They also flow faster than the western Amazonian waters.  All three of these factors contribute to it taking up to 8 km before the two bodies of waters have finally properly mixed as one, as two bodies of waters coming together really rather tend to do more easily. 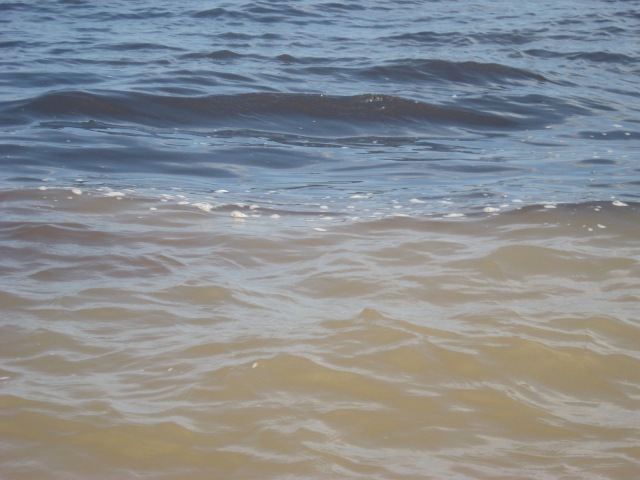 Even at this mid-point of the Amazon, thousands of miles from the Atlantic, the river is already so wide that the immense swath of the black half of the waters seem but a sliver from the opposite shore, and vice versa.

Still more pics of the immense Amazon ahead, and then heading towards our jungle adventure on the Urubu River.  And for music I’m including a classic Brazilian pop instrumental. 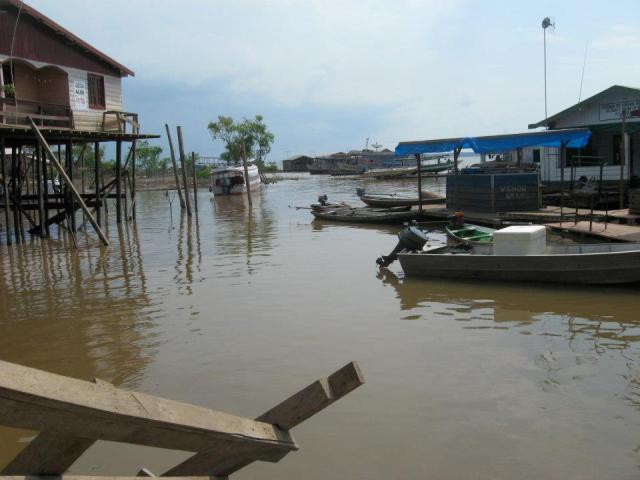 This fishing village /trading post is on the other side of the river, connecting to a road that heads into the jungle.

And here the promised classic Brazilian instrumental, by the legendary Antonio Carlos Jobim: Waves.  Considering the watery theme of this post, the title seemed appropriate.

Immense tankers looking far away and small on the wide river, as we cross back to the northern bank. 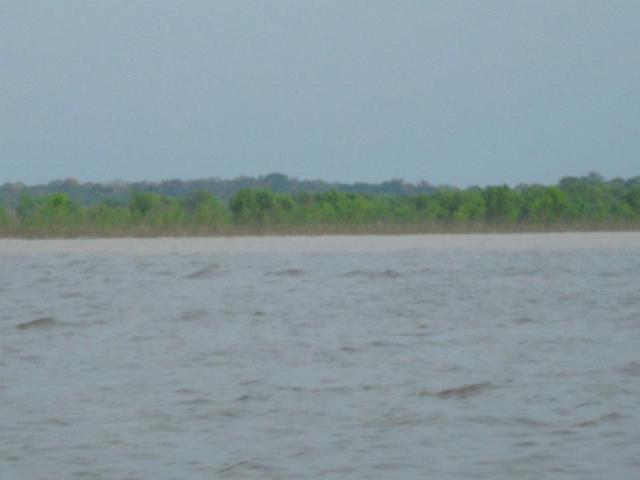 Remember, these are not vessels on an ocean, but on a river.  A massive river, but still only halfway to its delta; there it will be so wide you can’t see the far bank past the horizon.

I hope to post about Manaus on a future date.  For now let’s explore the waters of the Amazon system some more.  To do that we took a three hour bus ride from Manaus to a point where we could travel up the Urubu River to our “Weekend Jungle Adventure Camp”. 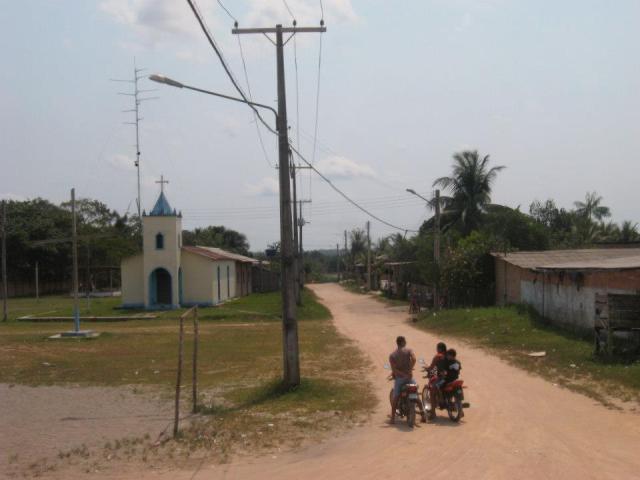 Our guide and our little boat await us.

Ed on the Urubu River.  We learned later that the black waters of the Rio Negro and its sibling rivers in the North are too acidic for mosquitoes.  Only in the height of the rainy season do you have to worry about being plagued by mosquitoes on the black waters, but not most of the year, including August when we were there four years ago and will return again this year.  August is the midpoint between the high water and low water seasons.  The brown waters of the southern Amazon region however support Mosquito larvae development, and consequently, we were told, those regions suffer terribly all year round from mosquitoes. 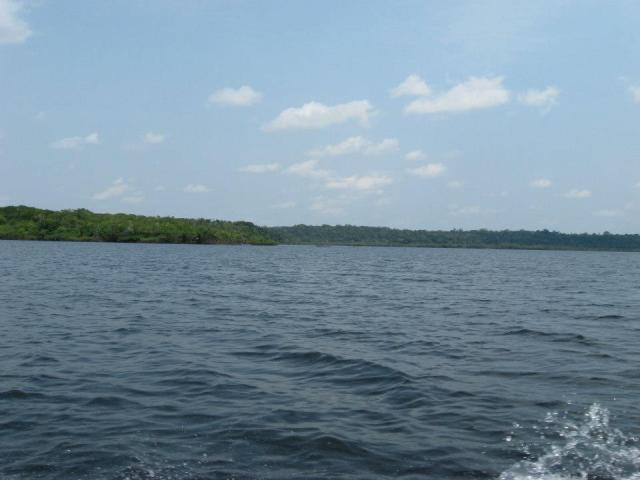 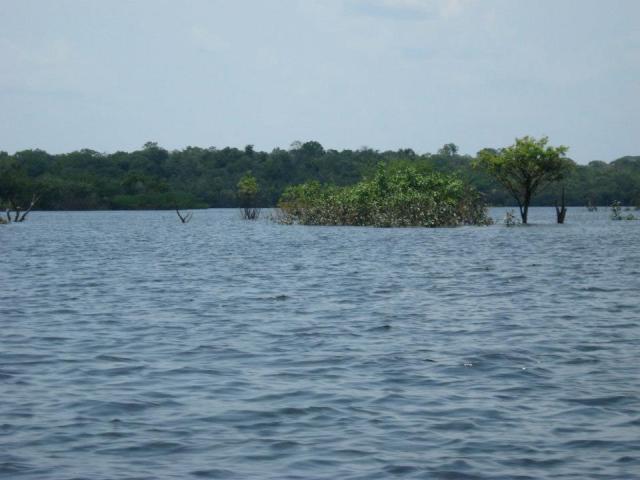 At this time of year, the water level is falling at a rate of about a foot a day.  You can tell by looking at the leaves of these trees that recently the water level had been much higher. 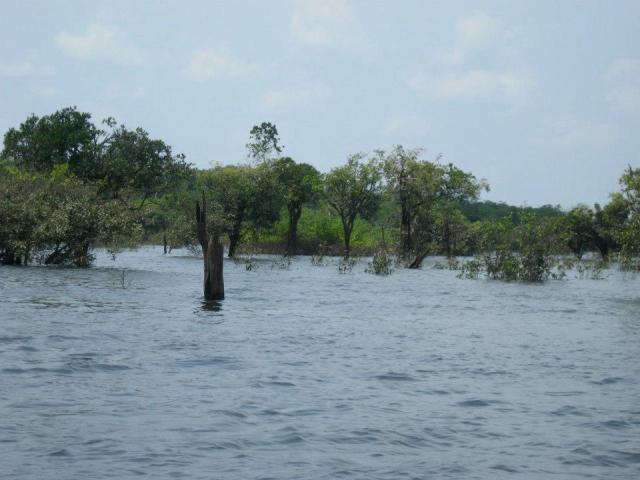 Heading through a short cut in the trees: 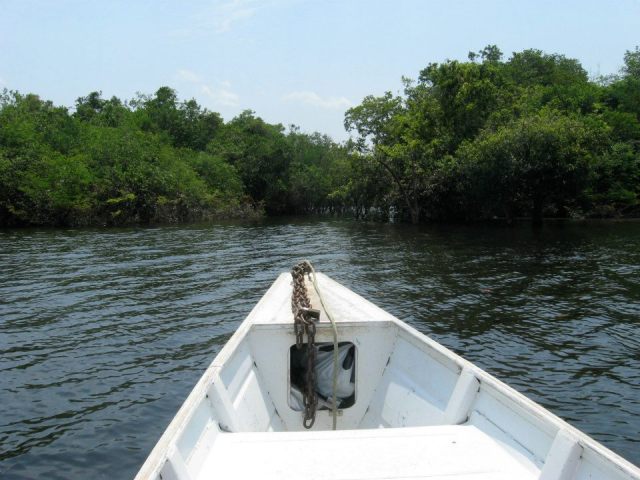 And we’re back on the main part of the river.

Someone built a home on an island in the river.  Possibly abandoned now.  Mostly we saw very few signs of people.

And after an hour’s ride on the Urubu, we reached our camp destination.  More on that and our further Amazon jungle adventures later.  But you can catch a glimpse of the view we had from the camp tower in the top picture of the previous post.