Posted on September 13, 2016 by dannyashkenasi 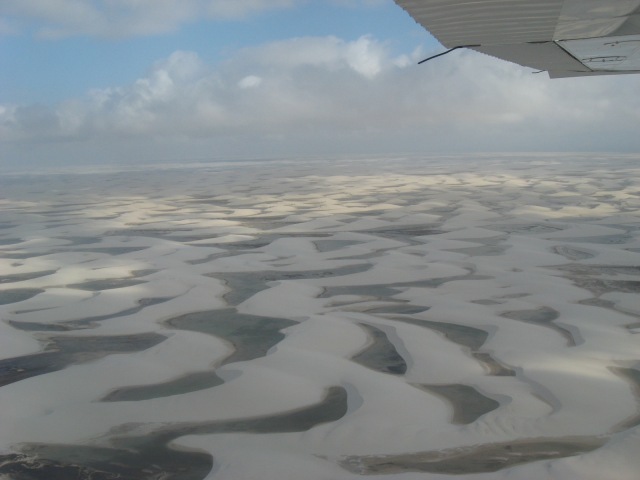 In my previous Brazil post I introduced you to the Lençóis region – the “Bedsheets” of Brazil, including two unique approaches / views of this one-of-a-kind landscape.

Today we will explore the Lençóis from three more angles, again revealing extraordinary and unique views.  We’ll start from above:

This is the little 4 seater airplane we hired (with some birthday present “mad money”) to take us on a thirty minute flyover across the whole Lençóis region.  The pilot and his trainee sat upfront and Ed and I sat behind.

I couldn’t help but have nervous thoughts of JFK Jr. and James Horner.  Especially when our pilot waited many minutes with the engine running before lifting off (we wouldn’t find out why until later…)

We started with views of Rio Preguiças, which snakes past the town of Barreirinhas and separates the Grandes (Big) Lençóis in the West from the Pequenos (Smaller) Lençóis in the East (look at the map here). 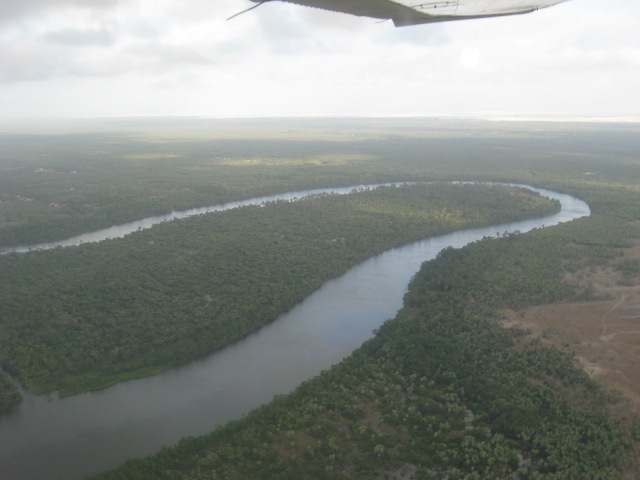 Above a view of the Smaller Lençóis to the East.

Below, the lighthouse near the delta of the Rio Preguiças.  (We will climb it later.)

The Lençóis beaches are fabulous.  I could have posted plenty more gorgeous high and ground level views of sun-dappled oceans and wide smooth beaches, but the real sensation of this area (and point of this post) is of course the unparalleled white dune landscape. 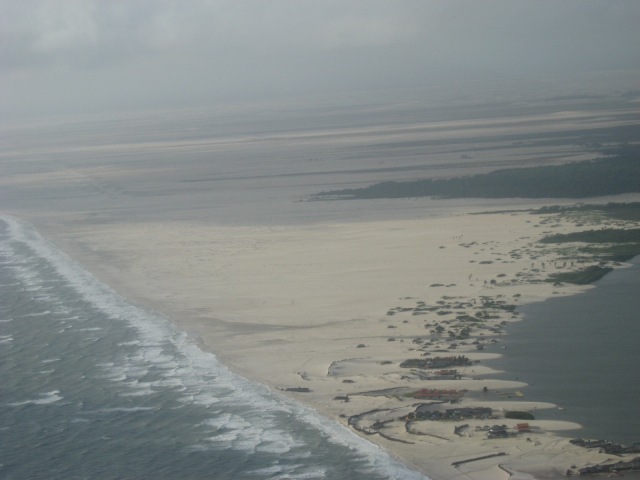 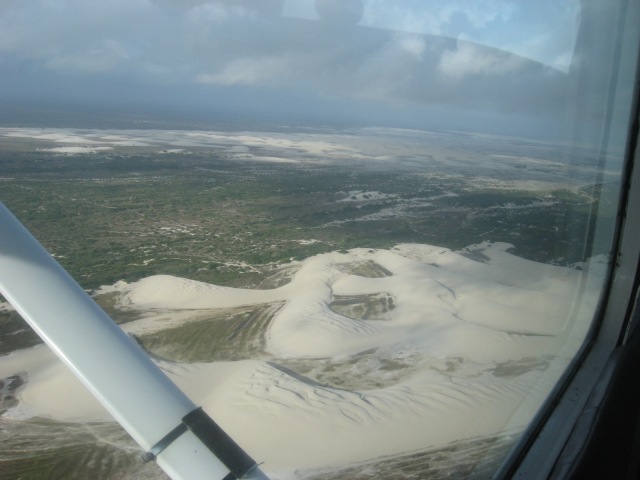 Eventually the Grandes Lençóis stretched out before us.

Last post I went highbrow with musical selections from Brazilian artists that directly reference the Lençóis.  But I also went cheeky with “Whiter Shade of Pale”.  This time I’m going to double down on the on-the-nose “white noise”.  And because I am an LOTR fan, I’ll start with:

But I think you’ll find most of the track works nicely for this landscape too. 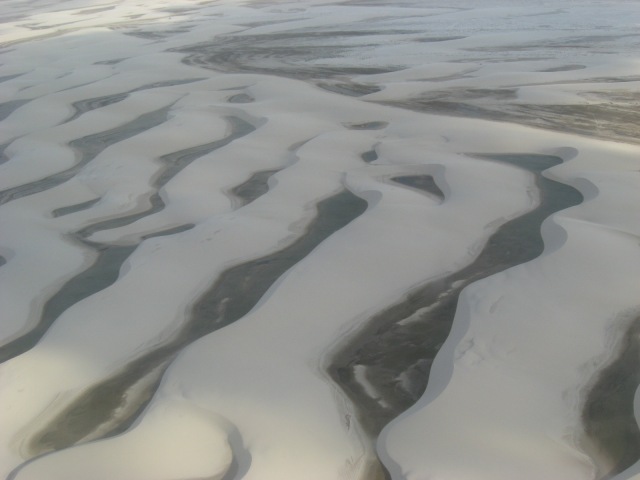 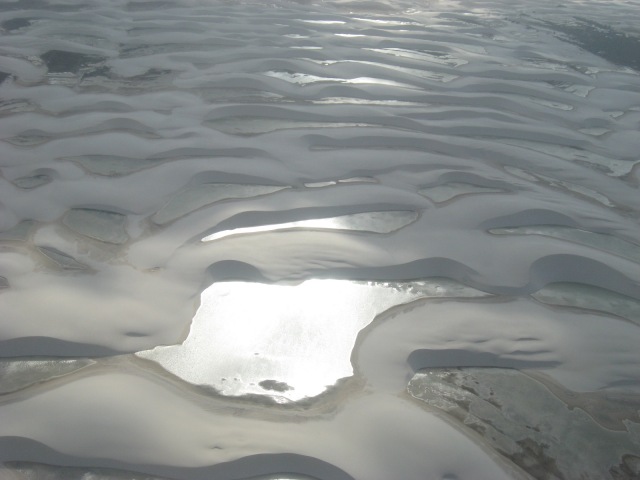 Above you can see lagoons still filled with water (the other post explains the natural cycles of the Lençóis in more detail).  Below you can see where all the water has already evaporated or is close to evaporating.  Normally the water lasts into September.  But this year the rains stopped in May rather than in June, and so mid to late August was already seeing many of the Lençóis lagoons dry up prematurely. 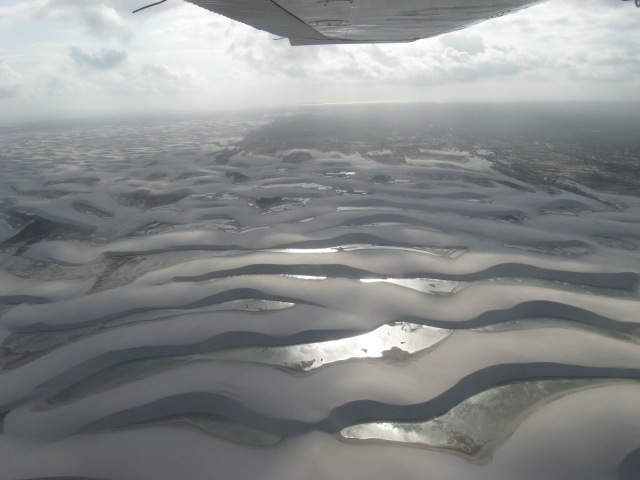 Barreirinhas, and Rio Preguiças, as we make our landing approach.

Note how our pilot, in the foreground, doesn’t look older than, oh, 16?

He told us after landing that the reason he waited so long to take off was because the engine was making “a funny sound”.

But he decided to take off and fly anyway and examine the engine afterwards, because he didn’t want to “make us sad”.

Alrighty then.  Thank God I didn’t get this information before we took off and I was still trying to dispel thoughts of JFK Jr., James Horner, oh, and let’s throw in John Denver, Patsy Cline, that little seven year old pilot and her father and who else is famous for plummeting from the skies in really small propeller planes?…

All semi kidding aside, I’m really glad we took the flight.

But a more aggressive white-themed song may be in order.  After all whiteout sounds a lot like wipe-out, right?  Yikes!

First glimpses of the Lençóis dunes traveling north from Barreirinhas on the Preguiças river. 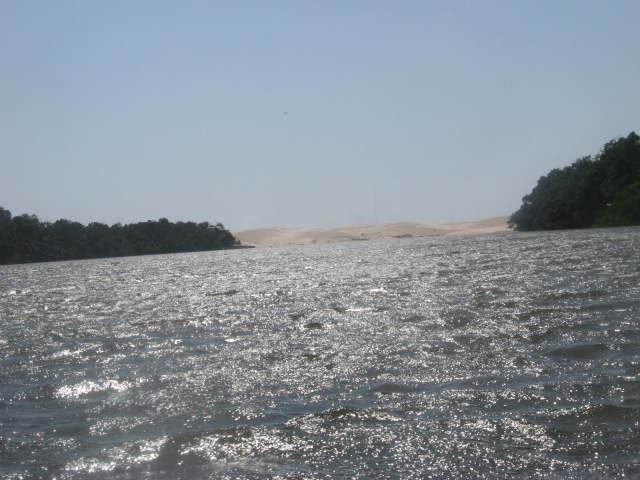 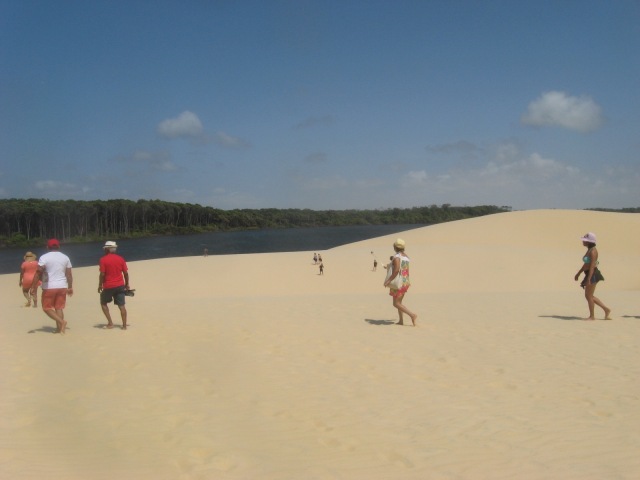 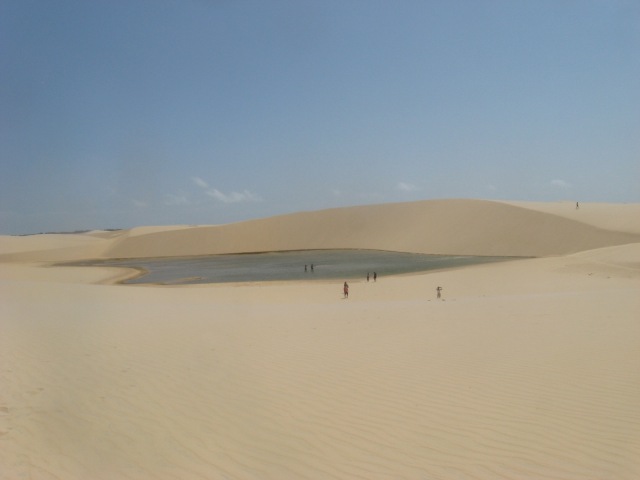 OK, Ms. Harry, that was a bit rough.  How about a gentle tune about white sandy beaches?

See the little guy poking his head out of the sand?

Here, a closer look at him.

He seemed completely unperturbed by our presence, merely moving just enough, when Ed nudged him, to prove he wasn’t dead.

After the water has evaporated from a lagoon, there is a short-lived growth of grasses and other plant-life.  After a few weeks the plants will die and the lagoon surface will turn white and sandy like its surroundings.  Underneath though some moisture will be preserved, as will some hibernating wolffish, who have burrowed underground to await next year’s replenishing rains. 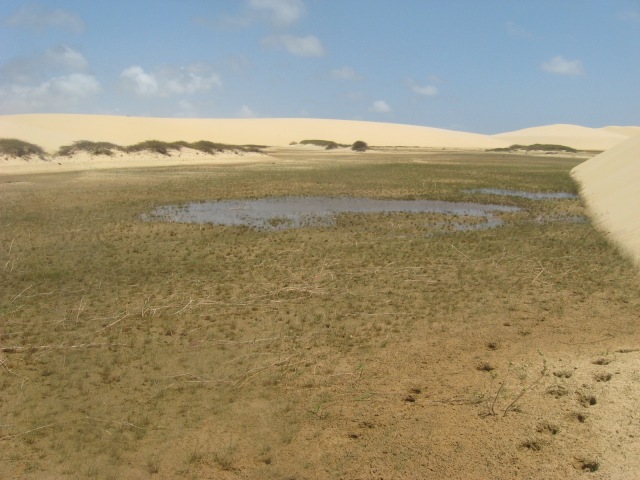 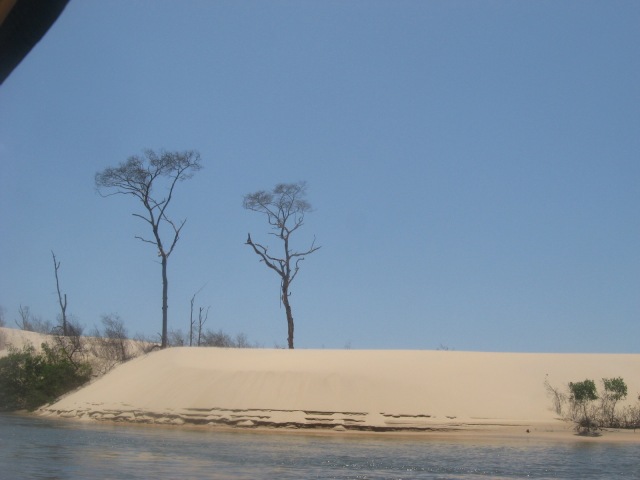 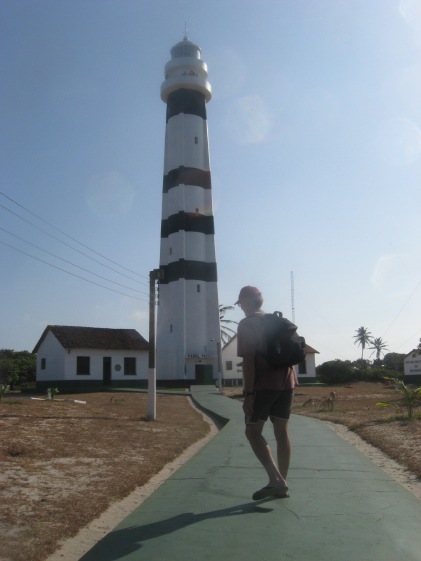 View from the Lighthouse – towards the ocean to the North: 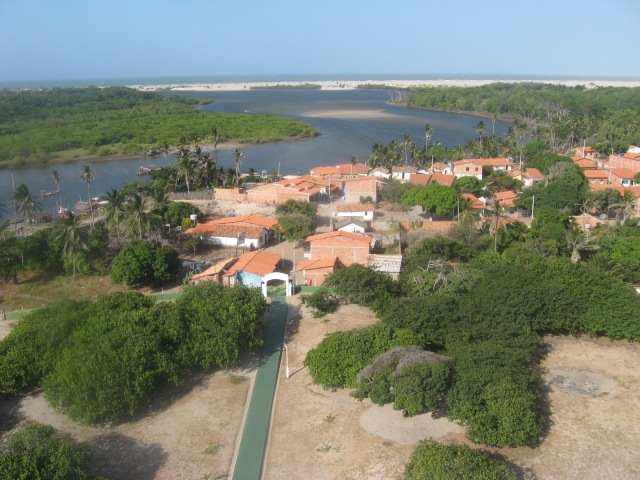 Looking East – in the horizon line you can just barely see the Smaller Lençóis: 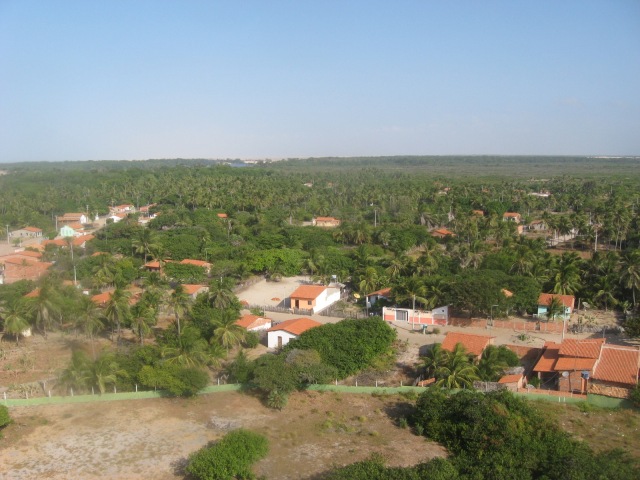 And since we are considering views from high structures much like lighthouses (as well as all things “white”), another LOTR track, this one with a most majestic theme:

Lençóis Approach #5 – from the West via Santo Amaro

We were back in a four wheel drive for this trip.  But up until you pass Santo Amaro you are mostly driving on an asphalt highway or a more solidly smooth dirt road, not the sandy strips of our first two Lençóis approaches.  So this visit there was somewhat less time spent being jostled and jackrabbited.

However East of Santo Amaro we drove deep into the Lençóis, on the white sands themselves, which is naturally  unpredictable terrain.  The driver needed an experienced guide beside him to navigate his way across the dunes.  To prevent us from unexpectedly going over a hard-to-spot sudden steep slope. 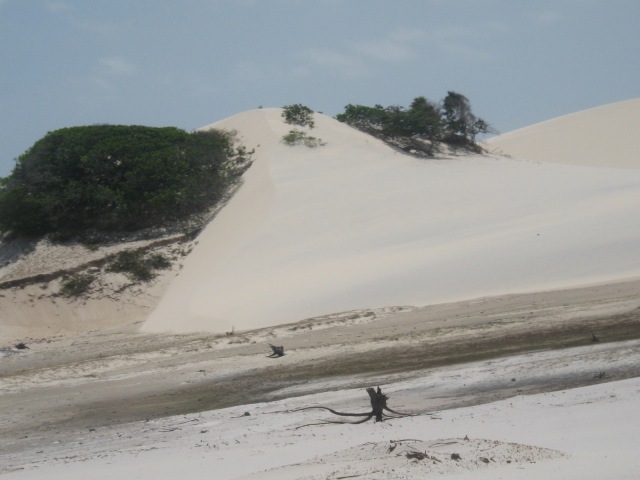 I got the impression that overall the lagoons were drying out sooner in the West than in the East of the Grandes Lençóis.

The lagoons that still had water were shallower than their Eastern counterparts. 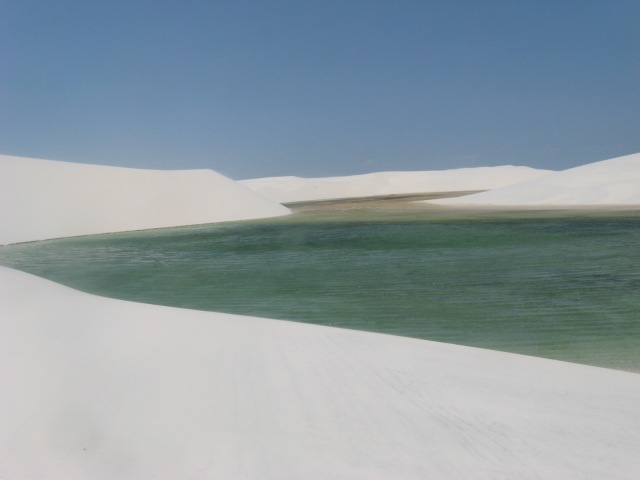 And deep into the Lençóis, this bathers’ oasis: 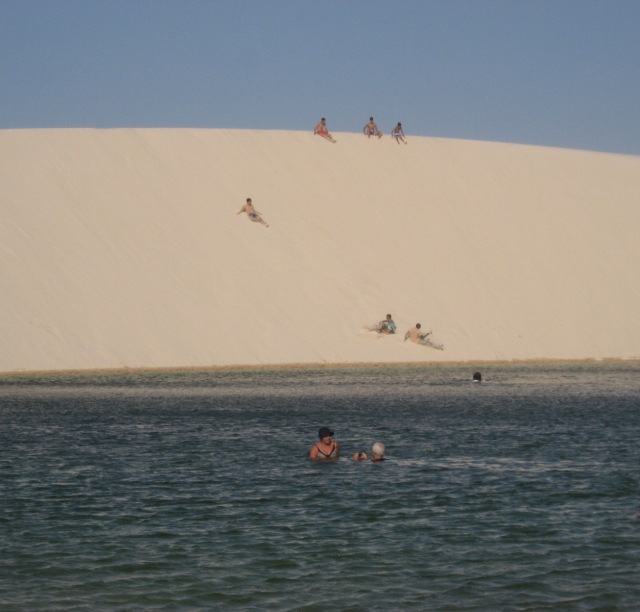 You didn’t think I would be so gauche as to include Billy Idol’s White Wedding, did you?

gauche, gouache, it’s all white to me…. 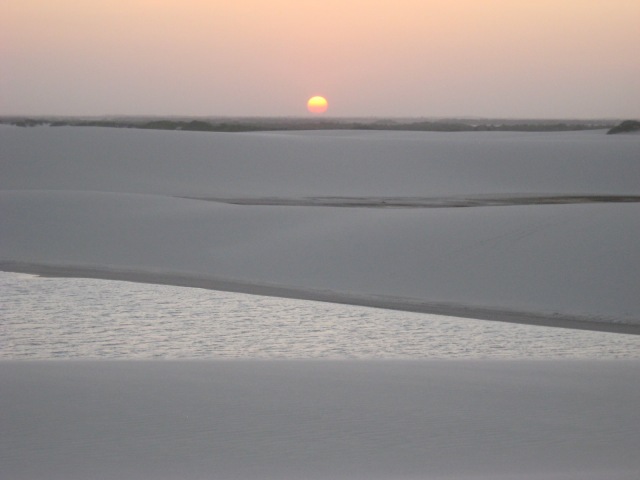