NfaC Repost and Update – Mister Danny and His Most Sung Song

Today I repost one of my first and still most popular “teaching artist” posts, featuring the Pre-K standard “We’re Singing” (well, standard in my Pre-K curriculum).  This year’s Pre-K classes at the Children’s School have taken to the tune with enthusiasm and added, as is customary, their own 3rd and 4th “things we do together”:

Just wait till I teach them The Beatles’ “Hello Goodbye”:

Mister Danny and His Most Sung Song

I am a teaching artist. Which means that I freelance as a visiting music and drama teacher to conduct arts education projects in the classroom for limited time periods, usually 8-12 weeks, in schools all across the New York metropolitan area. With budget cuts having eliminated so many arts programs in so many schools, having a visiting teaching artist like me come in to do a theater or music project in the classroom is often the only way some students have any kind of arts education during their school year. It is not nearly enough, but it isn’t rare that that is it for the arts in some schools some years.

I have been lucky enough – in addition to the short term teaching projects most teaching artists cycle through – to have an ongoing relationship with one school, the Children’s School in Brooklyn, which has asked me to return every year for over 15 years so far to teach music and drama and create original music theater projects with their Pre-K, Kindergarten, first and fourth grade students. The school employs full time art, music and dance teachers, but it also makes resources and time available to include me in the classrooms to conduct special music and theater work.

In school I am known as Mister Danny. The children call all adults by their first name with a Miss or Mister attached at the front. Miss Margaret, Miss Sandy, Miss Beth, Mister Doug, etc. Usually Miss, especially in elementary schools, where at some sites the custodian and I might be the only male adults in the building. At the mid-sized Children’s School there are about 8 adult males in the building, which constitutes one of the higher number of male teachers I have found in one school building in NYC.

Which probably explains why there are always some kids in Pre-K and Kindergarten who will call me Miss Danny during my first sessions with them. They are not trying to sass me. They just haven’t yet realized that there is a “Mister” as well as a “Miss” that one uses when addressing the adults in the room.

When I first started working with the young kids in First Grade, Kindergarten and Pre-K, the schools’ arts coordinators didn’t think we could do original music theater projects (which is my specialty) with children that young (although since then we have introduced such projects in Kindergarten and First Grade at the Children’s School). They asked me to do age appropriate theater games and singing. One arts coordinator in a school without a music teacher told me: “Just sing with them. There is no singing in this school. At all. I want the children to sing”.

There is something ineffably sad about that statement. I once read that one of the few requirements for school teachers in the American frontier was that they should play the piano and sing adequately. I remember my Kindergarten teacher, the wonderful Janet Matz, spending thirty minutes every school day strumming her guitar and singing folk tunes with us. To think that there are some schools where there is no singing at all – I’m not talking about actual music instruction, just simply singing some songs as a class sometime – is tragic.

As I was preparing for one of my first assignments with young children who would be singing in school for the first time with me, I decided it would be a good idea to follow a basic age appropriate vocal warm up with an simple song that introduces the children not only to the act of singing but also to the act of making movements to a song. When I teach young children a song, I look for songs that are age appropriate but not childish (“Itsy Bitsy Spider” is a fine tune if you are 3, but it would drive me nuts to have to sing it again and again). It should have few words to memorize (since the children will be learning by ear) and also allow for learning gestures and movements that can be acted out with the singing (this way the song is taught aurally, visually and kinetically). Songs like “Hello Goodbye” from the Beatles, “Do Re Mi” from The Sound of Music and “Steam Heat” from The Pajama Game, to name a few, have proven very effective. But before I teach a “real song” I wanted to teach a simple “warm – up” song that introduced the concepts of how they would learn lyrics and melodies from me, as well as the concept of doing specific movement together at select times of the songs.

So during one long bus ride to a school in Sheepshead Bay twenty years ago or so, I came up with the “We’re Singing” song. Taught orally all these years, I only just yesterday wrote out the actual “score” for this blog: 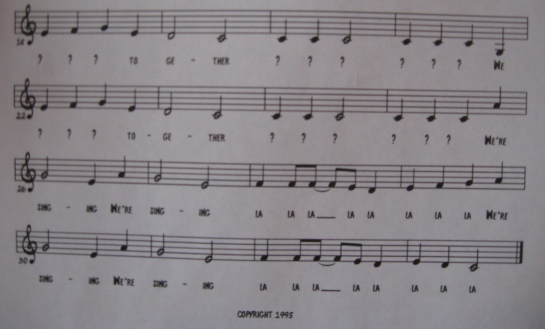 I not only teach the words (in rhythm) and then the music to each phrase, I also initially indicate the melodic rise and fall with arm and hand gestures. When I first teach the “la la la’s” I initiate a conversation about going up with our voices on the first la la la ending, and down on the second. I show where our voices are going by raising my horizontally stretched hand up and down, taking a step on an imaginary pitch ladder with each note. I don’t ask them to, but many children automatically mimic the hand gestures.

When “we clap our hands together” and “tap our feet together” we do just that on the “clap clap clap” and “tap tap tap” of the song. Then I ask the class to come up with two new things we could “do” and sing about doing together. Following is just a small list of all the myriad activities Pre-K, Kindergarten and the occasional First Grade class have elected to make part of their class’ version of “We’re Singing” in the many years I have employed this song:

And so on. You get the idea. Every year every new class gets to create two new lines for their version of the song (one year one child suggested “we shake our booty together”, and the teachers didn’t object, which made for a particularly fun bum-wiggling year). This acts as an early introduction to the concept of composing and making up movements, and also probably keeps things fresh enough for me that I don’t get absolutely sick of this ditty.

PS: 5/8/2015 – A friend just asked me whether any YouTube video or audio recording of “We’re Singing” exists.  There doesn’t.  But I obliged her request to sing the song on her answering machine.  So now somewhere out there a solitary recording of the immortal “We’re Singing” has traveled the airwaves.  If only Casey Casem knew…