Posted on October 16, 2015 by dannyashkenasi

The moment I read the announcement that Steven Spielberg was preparing his next movie called “Bridge of Spies”, I knew, without having any additional morsel of information, that Die Glienicker Brücke – the Glienicke Bridge of Berlin, also known as Die Agentenbrücke, the Bridge of Spies, would figure prominently in the movie.  And although “Bridge of Spies” may function as a movie title that describes a metaphor for the “inspired by true events” story as much as the literal bridge in question, I don’t think I am spoiling anything by confirming that the climax of the movie does indeed place Tom Hanks on the literal Bridge of Spies, famous for the Cold War spy exchanges that took place there over the river separating Berlin from Potsdam, separating West from East.  Except on that location, geographically if not geopolitically speaking, the East was on the western side, and the West was on the eastern side. 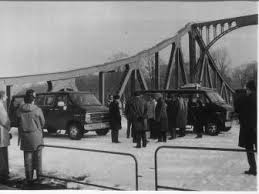 I was born in Berlin five years after the events depicted in “Bridge of Spies” and lived for 19 years a mere five miles from the Glienicke Bridge, in the same Berlin district, Zehlendorf, that borders the bridge, and includes the long avenue Postdamer Chaussee, which becomes Königsstraße, which leads to Postdam, but then could not actually bring you there anymore.  All my life I knew Die Glienicker Brücke as Die Agentenbrücke people would tell tales about, although I would glance it in person only once before the Iron Curtain fell, when my class took a field trip to the nearby Glienicke Park.

The “Bridge of Spies” nickname was evidently earned during the 1950’s, when the Glienicke Bridge was used for East/West spy exchanges on numerous occasions.  Only 3 (or maybe 4 – Wikipedia accounts vary, fancy that) spy exchanges actually occurred on the bridge during the time of the Berlin Wall.  I watched one of them on television in the early 1980’s.  Other than those few East/West bartered prisoners, including the two most famous ones, Abel and Powers, dramatized in “Bridge of Spies”, no humans crossed that bridge from end to end in almost 30 years*. 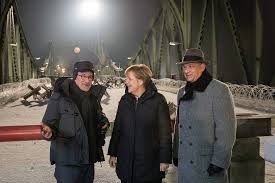 Anticipating the movie “Bridge of Spies” and finally seeing it Friday afternoon stirred many memories about growing up near the titular bridge and the Berlin Wall.  The movie is a sterling example of solid grown-up Hollywood film art, and with masters like Spielberg, the Coen Brothers, Kaminski, Hanks, Rylance involved, it could hardly be otherwise.  My favorite scenes came early in the movie when episodes of ominous pursuit and evasion were played with wordless, taut suspense, reminding me of classic black and white Hitchcock masterpieces. 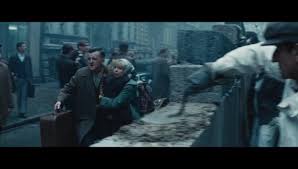 But the scenes that hit me emotionally hardest depicted the building of the Berlin Wall.  It is one thing to have grown up with exhibits, photographs, articles and documentary footage of the days the wall was erected; it is a different experience to see them dramatized in a Capital M Movie. Regardless of how true to the actual historically documented events around the building of the Wall the movie’s scenes are (I can’t speak to every detail depicted), seeing it on a large screen, with sets and cinematography and camera movement and acting as only well-made big budget mainstream movies can supply, brings theses events to you in a completely new and powerful way – as “only the movies can do” I guess – and the emotional reaction is unique and potentially very powerful too. 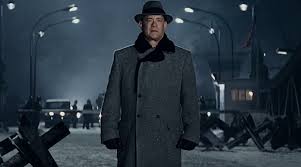 There was a second captured American enmeshed in the Bridge of Spies Story.  In addition to the U2 spy plane pilot Francis Powers, shot down over the Russia, the American PhD student Frederic Pryor was caught on the wrong side of the Wall as it was being erected.  I didn’t know much about Frederic Pryor going into the movie, but was caught off guard by parallels between him and my father.  Both of them were American PhD students working on their dissertations in Berlin at the same time, Pryor on the Soviet Economy, my father on the Social Democratic Party, both were in their mid-to-late twenties.  And the actor playing Pryor in the movie is tall, broad and boyish looking like my father was then too.  My father didn’t know of Pryor at the time though.  I guess Economics and Political Science PhD students don’t mix, even if they are both Americans in Berlin.

My parents, both Americans who met in Berlin in 1960, were out of town the day the Berlin Wall was being erected.  They were attending the Bayreuth Festival in Wagner’s famous opera house, when they heard from their friends in Berlin news of the Wall being erected.  They quickly got into their VW bug and drove back to West-Berlin.  It was unclear what the future portended for Berlin, while the Wall that would so brutally divide the city was becoming an ever larger, more permanent and brutal barrier, but my parents wanted to make sure they were back with their friends in the city they called their home.

Many years later my parents would be amongst the first to cross the Glienicke Bridge from end to end again.  The night the Wall came down, Nov. 9, 1989, they had been attending a concert commemorating the anniversary of Kristallnacht, when they saw a Trabant on the road.  Seeing a Trabant – the famously dinky East German car – on the roads of West-Berlin was, to put it mildly, highly unusual.  Moreover, the four young passengers in the car were smiling and laughing and pressing their DDR passports against the windows.  “I guess they opened up the Wall”, my father exclaimed bemused.

(It is a sad irony of history that the opening of the Wall fell on the anniversary of Kristallnacht, of all anniversaries.  Which is why Germany’s modern national holiday for Unification is October 3, the date West and East Germany officially became one nation in 1990, rather than November 9.)

A few days later my folks decided to take a day trip to Potsdam.  You had to drive west down Potsdamer Allee and Königsstraße towards the Glienicke Brücke to make the crossing.  A wry joke amongst West-Berliners during the Iron Curtain era was “it doesn’t matter which direction you take out of the city, you are always heading East”.  Day passes were only just being quickly issued for West-Berliners to travel into the East, but my parents actually had visas for passage into the DDR because my mother had singing engagements in Dresden and Leipzig that autumn (where she witnessed some of the large popular demonstrations that would eventually lead to the fall of the Wall).  By the expression of the East German border guards stationed on Glienicke Bridge my parents surmised there were not many Westerners who had yet crossed over to the East yet that day or earlier.

However, once across the bridge they were greeted by a Postdam native who had taken it upon herself to hand West-Berlin visitors street maps of Postdam.  A very friendly and practical gesture on her part, as maps of East-Berlin or Potsdam would not yet have been readily available in the West.  My parents drove through Potsdam and walked through the great park of Sanssouci.  They said the town seemed deserted.  Everybody was evidently visiting West-Berlin.  East-Berliners had been streaming joyfully and curiously into the suddenly opened West ever since the Wall came down just a few days before.  The only other people my parents came across in the park of Sanssouci were Russian officers and their wives.

Nowadays the Glienicke Bridge is the easily crossed, busy thoroughfare connecting Berlin-Zehlendorf with Potsdam, Brandenburg.  My parents and Ed and I have crossed it many times, and have visited Potsdam and joined the throngs of international tourists in Frederick the Great’s palaces and parks, just recently again this July.  The Glienicke Bridge has become quite ordinary again.  It may have lost its Cold War luster and thrilling spy exchange romance, but it is a whole lot less lonely nowadays.

This was part one of Berlin Wall Memories.  Next week I will follow up with more, including more personal stories about the Wall and the night it came down.

* or so I thought.  A teacher from my school offers this memory:

“When I was a teacher in Berlin , 1980-85, I actually crossed the bridge. The Americans had a house in Potsdam that was part of the four power agreement.  It actually was a place where the American soldiers went around East Berlin spying.  The right of access was paramount and the Americans made the trip twice a day.  I remember sitting in the back of the army vehicle and holding my passport up to the window.  We passed through without incident. I stayed overnight in the house with many others, but did NOT venture outside.  A couple of years later while we were still in Berlin an American Officer was killed by East Germans.  Dangerous times.“