Posted on October 14, 2015 by dannyashkenasi 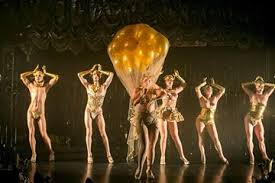 That is how AMDM Productions describes the luscious presentation of “Cinderella” currently playing at the Minetta Lane Theatre.  This undeniably adult take on Charles Perrault’s Cinderella (1697) by Company XIV, which deliciously blends “opera, circus, Baroque dance, vaudeville and cabaret styling to create a whole new spin on the classic” had me completely enraptured throughout its three sexy and sensational acts of incredibly accomplished singing, dancing and acrobatics, ennobling good-natured cheesecake and beefcake sauciness. 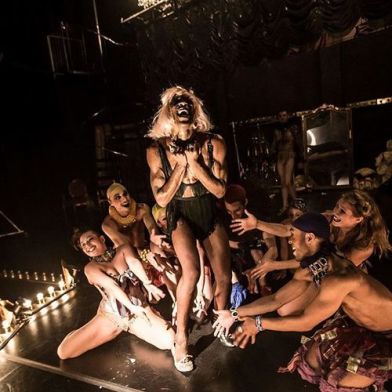 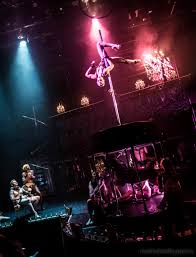 The stepsisters (Marcy Richardson & Brett Umlauf) are introduced singing the Irving Berlin chestnut “Sisters”; that’s not too unusual, but it is clever and unnerving that they are warbling perfectly accented German as “Schwestern”.  That these performers have classically trained operatic chops becomes even more abundantly clear when they sing Lourdes “Royals” in a French translation, making it sound like the Flower Duet from Lakme.

Later one of the stepsisters does an amazing twirling, upside-down-hanging pole dance twelve feet in the air while expertly singing a classical opera aria (also in French; wish I could say which aria, but the musical selections weren’t credited in the program).  Incroyable! Merveilleux!

The Prince (Steven Trumon Gray) is lying languid and bored in a big white bathtub.  He is singing a Russian Art Song, and his voice is gorgeous and clearly classically trained.  Then he rises from the tub, and we see he is dressed in a chest exposing baroque bodice, an extra bulgy cod piece that is a mere g-string at the rear, tattoo sleeves, King Louis pumps and nothing else.  An aerial hoop is lowered from above and a man who could be singing at the Met then does an acrobat act worthy of Barnum and Bailey, before dancing so beautifully with the full ensemble he might as well be a member of the Martha Graham Company. 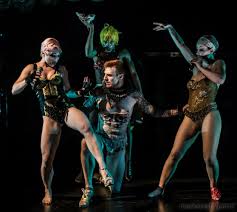 At the climax of the evening, the Prince will be back hanging from the hoop, but this time the balletic Cinderella will be up there with him.  Just when I thought her part will probably not be as daring as his had been before, the two of them embark on a gravity defying, gasp inducing routine that makes the earlier one seem tame by comparison.  Turns out Cinderella (Allison Ulrich) in real life is a veteran of Cirque de Soleil as well as Julliard.  So no wonder!  She probably is the one who trained the Prince in the aerial acrobatics, since his background is “merely” a BFA in Dance and a BA in Vocal performance. 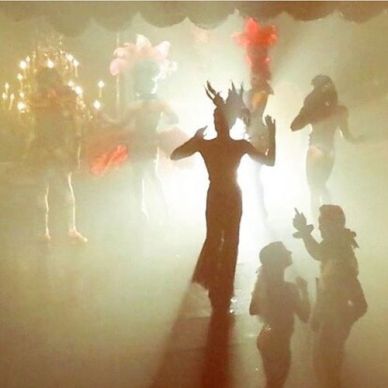 I love how the highest of the high-brow arts and the earthiest of the low-down arts are blended again and again so that they don’t separate.  The tastefulness is never precious, the titillation never cheap.  Rather a warm glow of humanity and inclusiveness, of joy in the body human via all sorts of pretty shapes and genders, of delight in talent and entertainment and art in all its exalted and democratic variety, infuses the whole wonderfully sexy but un-sordid affair.

May I say again just how much I loved it!  It drove me to distracted alliteration! 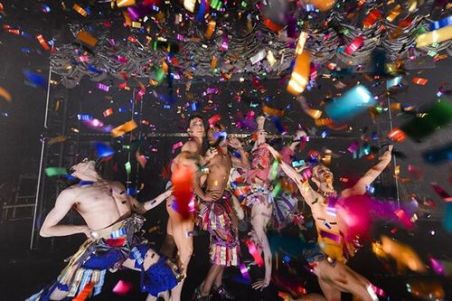