Posted on July 2, 2015 by dannyashkenasi

Welcome back to the Spree Forest and the Spreewaldlieder song cycle for flute and harp.  (Head here for Part 1 if you missed it.)

When I got the commission from the Duo Elysée I was excited to compose for flute and especially harp, for which I had never composed before, and whose particular properties I had only just recently coincidentally studied.  Dividing the composition into twelve short pieces each devoted to a different aspect of the Spree Forest experience allowed me to explore a variety of colors and playing techniques for both instruments in discreet sections.  I wasn’t necessarily intending to paint musical pictures with the pieces, although the titles for each piece certainly suggest that some of that is going on.  I was more interested in allowing each of the twelve titles or images to elicit an organic, internal musical response, influenced by a particular tack of expressive playing.

Let’s continue our day trip in the Spreewald(lieder):

The main food delicacy of the Spreewald is pickles.  This detail usually provokes a wince whenever I tell people, but the thing is those Spreewaldpickles are GOOD!  I’m not a big fan of pickles in general, but these varieties are superb.  I especially love the honey, mustard, and garlic pickles, so I named this duet after two of those.  Throwing in a piece about pickles also allowed for some lightening of the mood after all the languorous beauty of the landscape.  It also inspired some cheeky technical flourishes for the musicians, in particular the flutter-tonguing on the flute and the rapid up/down strumming on tone clusters on the harp.  Trying to capture both the sweet and sour nature of those delicious pickles. 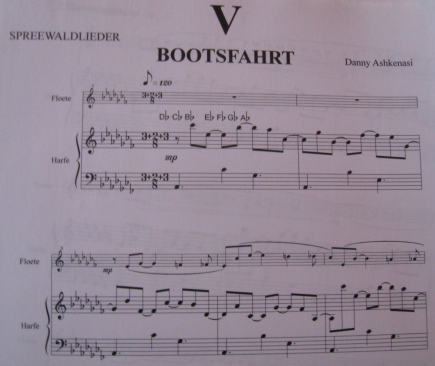 If you relish the exercise you can enjoy much more of the Spreewald by canoeing through the narrower waterways the larger tour boats don’t enter.   The main theme heard previously in Kahnfahrt – Boat on the Wide Canal is varied to suit this lighter, more private mode of nature exploration. 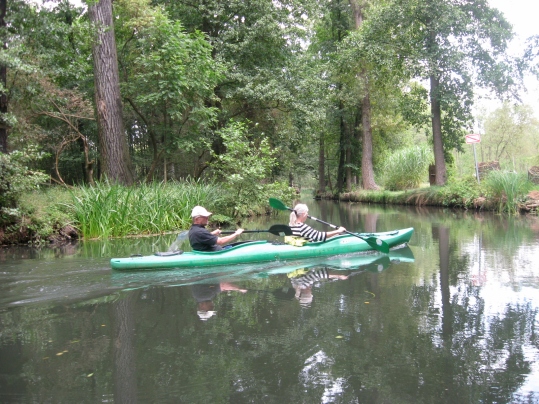 VI  Wasserspiegelung – Reflections on the Water

The image of water reflections provided a good reason to employ harmonics on the harp.  Indicated by circles above the notes in the score, the harp harmonic is produced by stopping the node at half the string length and plucking the upper half of the string with the same hand, producing a sound an octave higher with a light bell-like ring.

Stay tuned for part 3 of our trip through the Spree Forest Suite.