The other day the director Lissa Moira and I were conducting one of our regular weekly meetings, reading through the Speakeasy libretto and discussing production and staging possibilities. We got to the song “Wonderland” as sung by the Tweedle Sisters in the Wonderland nightclub, including the following lyrics:

IF THE MUSIC’S “HOTCHA”

AND THE RHYTHM’S GOTCHA

PUTTIN’ IN THE WATER HERE?”

THEN THE WONDER’S CAUGHTCHA

GRINNING WIDE FROM EAR TO EAR

Lissa asked me whether I was sure the Cha Cha was already known in 1930. I assumed it was. I assumed I had done the research to make sure, just like I had done the research into so many elements of the libretto. But it turns out I hadn’t. A quick flurry of clicks into the internet confirmed that the cha cha wasn’t invented until 1953, over twenty years after the time “Speakeasy” is set. Oopsidaisy!

Rats.  Not an easy lyric to replace.  But I was able to find an alternative that should suit the feel of that wacky chorus just as well, substituting the “cha cha” for the “wah wah”, that special sound, often vocally imitated, that trumpets and trombones make when capped by a mute, shaped like a bowler hat, also called the “wah wah”. This sound and the look of band members using the “wah wah” is practically synonymous with the Jazz Age.

So now the lyrics read this way:

IF THE MUSIC’S “HOTCHA”

AND THE RHYTHM’S GOTCHA

PUTTIN’ IN THE WATER HERE?”

THEN THE WONDER’S CAUGHTCHA

GRINNING WIDE FROM EAR TO EAR

It’s not the only lyric from “Wonderland “ I have rewritten since the demo tracks for “Speakeasy” were recorded. “Tycoon Al” is now “Tycoon Paul” for example. Keep that in mind when you listen to “Wonderland”:

The Tweedle Sisters are of course based in part on Tweedledum and Tweedledee, who appear in “Alice Through the Looking Glass”.  Alice’s meeting with them informs John Allison’s interaction with the Tweedle Sisters in “Speakeasy”.  The Tweedle Sisters may share Tweedledum and Tweedledee’s habit of carrying rattles, at least to add some percussion to their performances in the Wonderland, but in their looks they likely have more in common with the famous real life vaudeville performers The Dolly Sisters.  They were a famous twin sister dance act of the Jazz Age, possibly even more famous for their extravagant life styles, rife with gambling, jewels and wealthy lovers, than they were for their exotic performances. 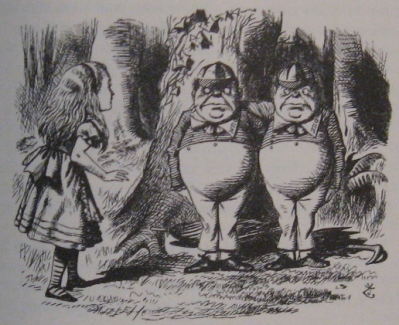 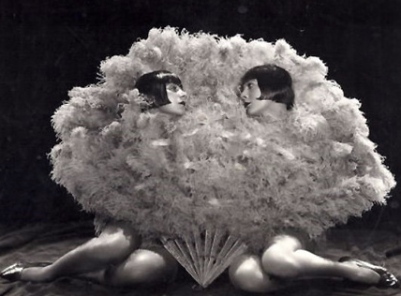 Click here to listen to all the Speakeasy demo recordings.