Sensual Statues in the Streets of Paris

Posted on September 19, 2018 by dannyashkenasi 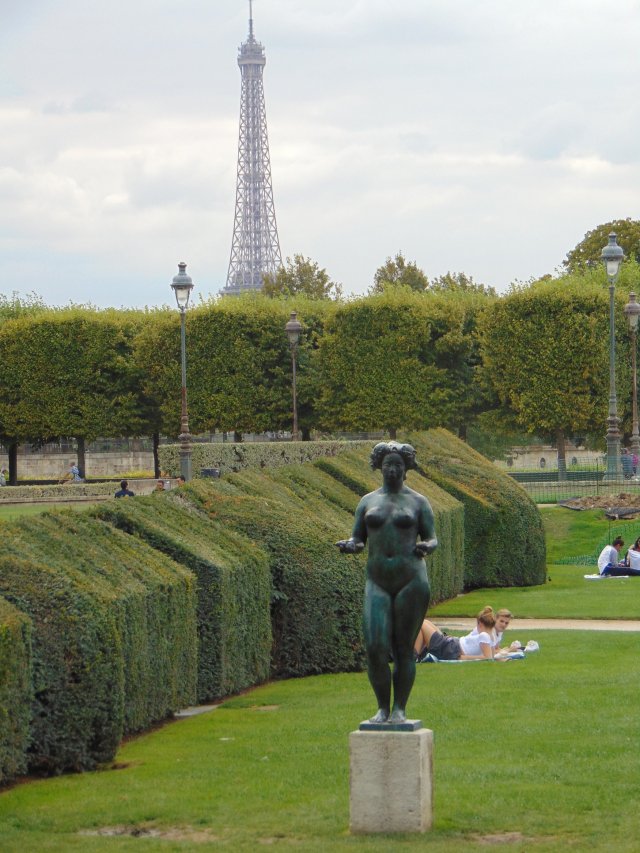 Nude statues are all over Paris.

I don’t know if statistically there are more nude statues there than in other European cultural capitals, or if the nude statues of Paris are particularly more sensual than elsewhere, or if it is just the particular perspective of a 51 year old queer man that drew these nude sensual statues to his (OK, my) camera’s attention, and maybe it says less about Paris and more about my own sensibilities, or predilections, that I not only directed my camera towards these nude statues but maybe also teased out more sensuality from them in the way I photographed them than the sculptors intended.

Or maybe it’s everything above, the nude sculptures of Paris, their sculptors’ overt or hidden intentions, my prurient perspective and, occasionally, my camera’s angles too.

(You know those compilations of classical music sold like greatest hits albums?  Especially the ones called “Sensual Classics”, like that one cd with a picture of two soulfully shirtless men Ed purchased at a Gay bookstore in the ’90s?  I might as well accompany my Sensual Sculpture post(s) with music from that cd, pre-approved by the Sensual Classics series, selecting the choice classical tracks to make out to.)

Sometimes a nude is just a nude.  Like these two nudes on the Arc de Triomphe.

There’s nudity in Napoleon’s vainglorious memorial, but not much sensuality. 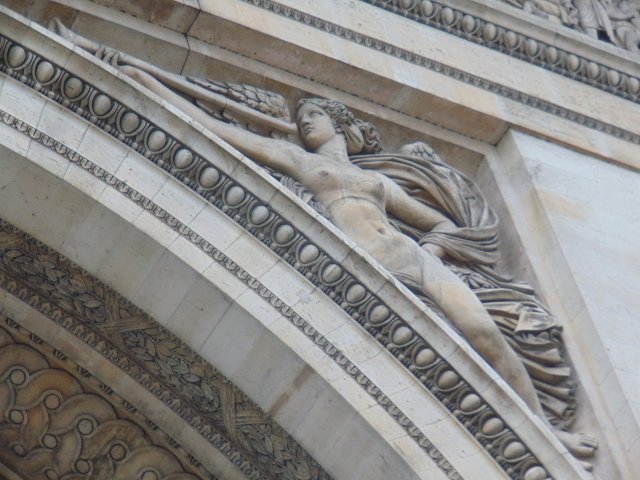 But the nudes holding up the street lamps around the Paris opera house are undeniably posed to be sensually alluring.  Their closed eyed passivity makes them seem to me akin to three dimensional pin-ups.   Less works of art than obvious sops to an objectifying male gaze. 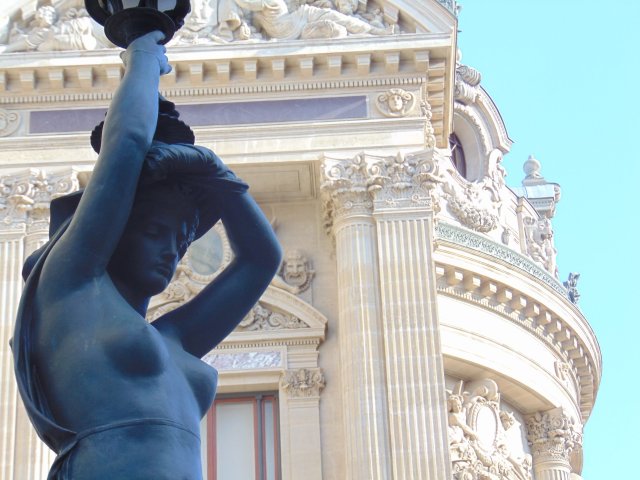 But still alluringly sensual, even if socio-politically problematic.  Luckily better art more deserving of our sensual fascinations lies ahead.

The breasts of the golden angel on top of the Fontaine du Chatelet may be as exposed as the street lamp maidens, but the figure’s position and gesture gives her more agency.  The sensuality resides less with the nudity than in how the sunlight plays with the gold. 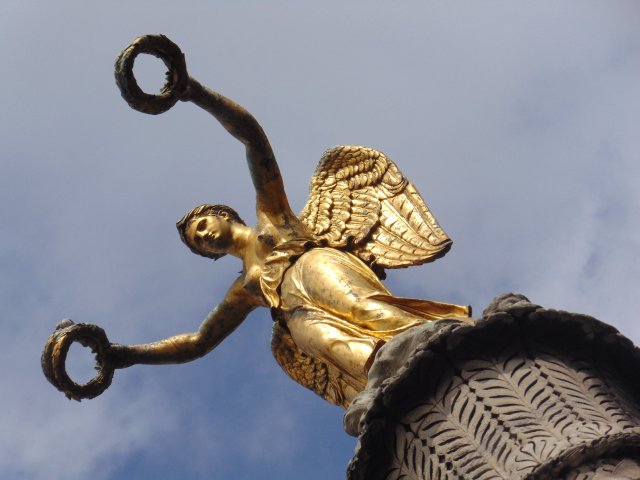 And because I am an equal opportunity (or all gender) ogler, let’s follow up the golden disrobed female angel with the golden naked male angel on top of the column at the Place de la Bastille, which is where another, more recently built opera house also happens to stand. 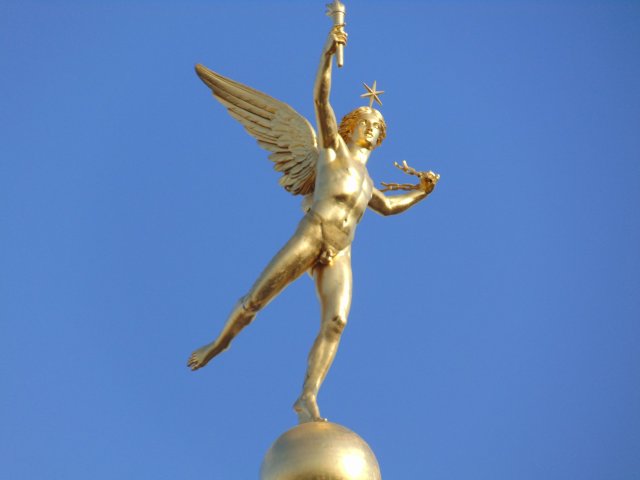 Most of the nudes displayed statuesquely in the streets of Paris are at least a hundred years old and classically trained, so to speak.  But there are exceptions in a more modern, 20th century vein, like this large languorous figure near Arts and Metiers. 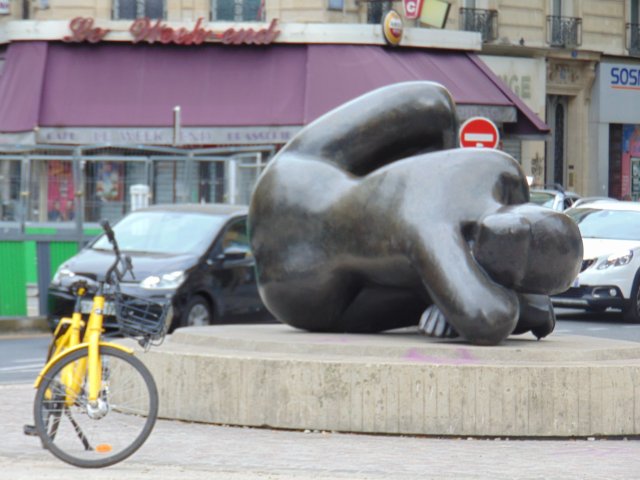 There’s nothing overtly sexual about these male nudes hard at work on one of the Seine bridges, but it can’t be denied how their virile musculature is on dynamic display.  Watching half-dressed men at hard physical labor is a whole class of soft-core erotica all by itself, after all.

There is lots of sensual nudity, sculptural and painterly, at display inside the Louvre museum (which I will get to in another post, surely).  The outside facade however is mostly rather stately and prim.

Still, if you are into naked hunky men tied up in bonds, those can be found near certain windows. 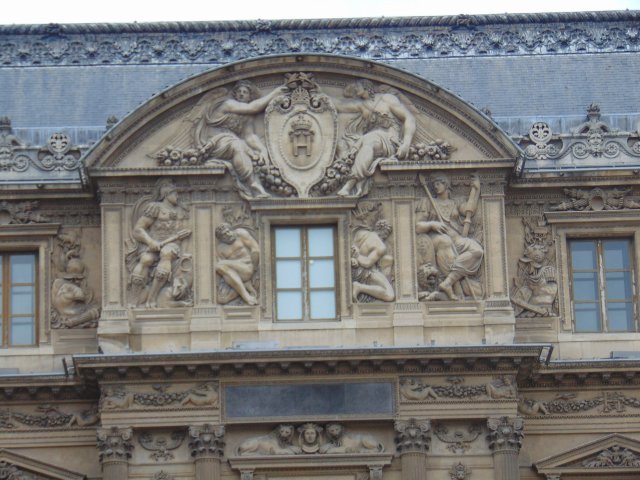 But for a more delicate sensuality, these particular figures caught my eye, holding hands, breasts barely draped, looking off into the far distance wistfully.  There seemed to be a sad, sweet, sensual story there.

Between the Louvre and the Place de la Concorde is the Jardin des Tuileries (Tuileries Garden), where you will find a surfeit of nude statues of all kinds, most posed with sensual flair, even if their subject matter may have little to do with sexuality.

(Parenthetically, I love how birds will insert themselves into a statues’ presentation. A droll visual disruption.) 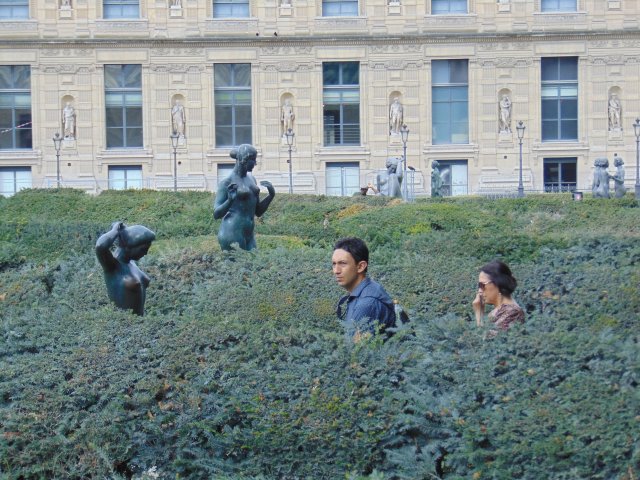 This statue (next two pics) seems like a bridge between the classical nature of most of the statues in Paris and the languorous modern nude we saw at Arts and Metiers. 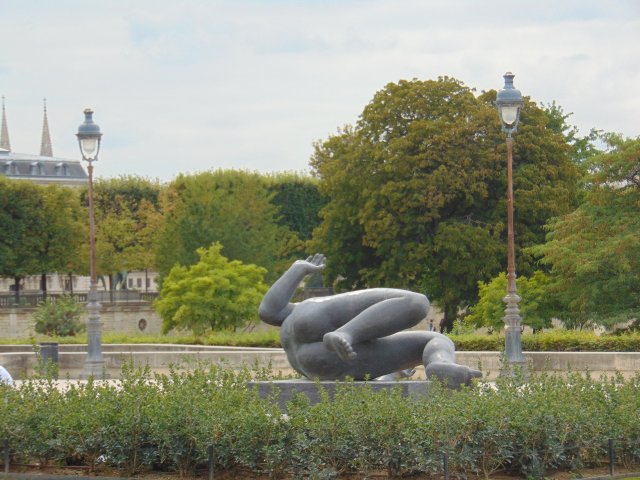 The statues on the Louvre building may be mostly decorously clothed.  On the other hand, the statues on the facade and in front of the Museum of Modern Art are clearly more comfortable displaying their bodies and their sensuality.  (Whether or not the public takes notice.) 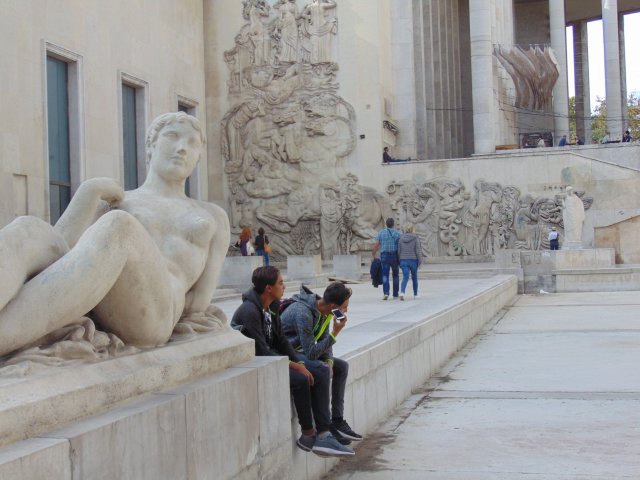 Back to another garden, this time the Jardin du Luxembourg.

Where the Fountain of Medici displays young lovers… 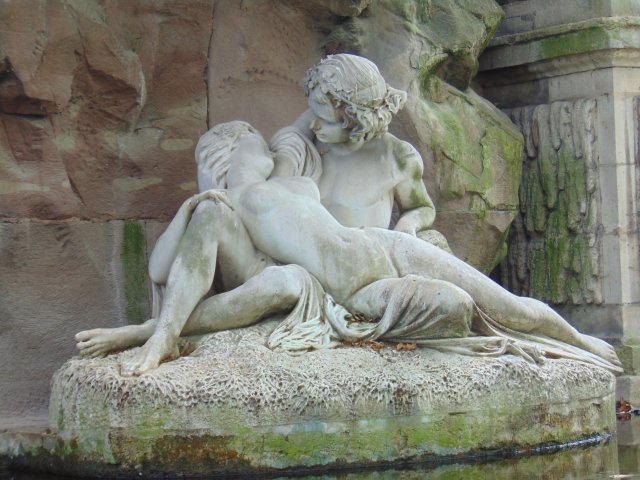 …caught in the act. 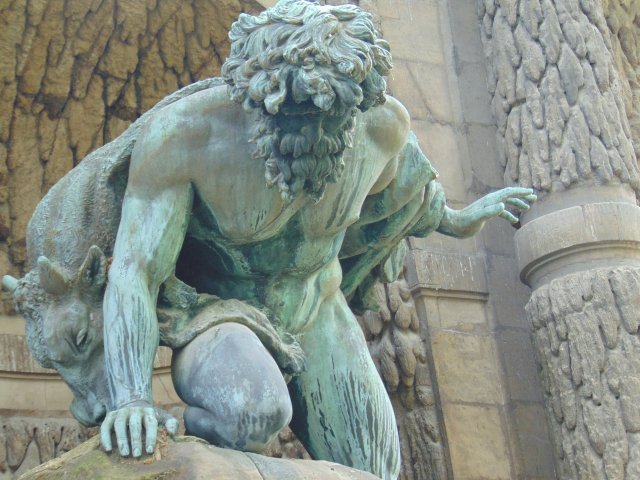 Plenty more nudes in the Jardin du Luxembourg, though not as obviously romantically inclined.  The statue of Bacchus and his revelers is surely very fleshy and lusty, but not at all romantic:

This is a statue of “The Actor”.  Naturally had to include him.

Beyond the nudity the only sensual aspect of this statue may be the tilt of the hip. And admittedly, my camera’s gaze.  (And then there is the cheekily situated tourist.)

Back near the Louvre again, there is this statue, displaying a boisterous youth returning from a successful hunt.  His near total nudity is of course a mere side feature of the statues’ sporting theme. 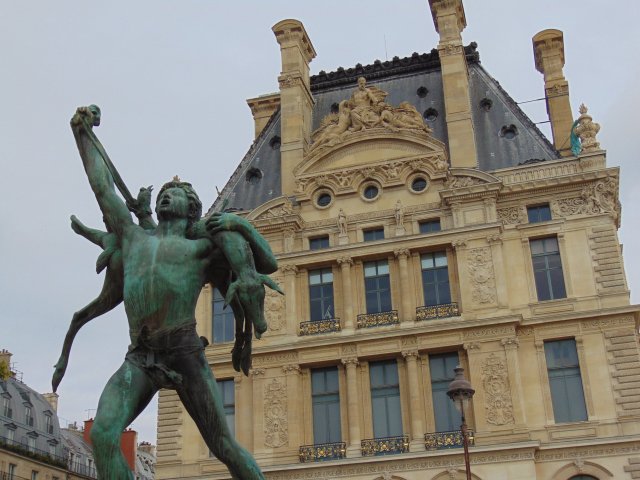 So maybe it’s up to my gaze through the camera to make the sensual side more overt.

This is an arty silhouette, isn’t it?

But this more blatant exposure (double entendre, or double exposure, if you will, pun fully intended) may be more in line with my baser intentions…

I better repent for my ogling eyes.  Surely in church sculptures are purely spiritual, nothing sensual or even too stirringly pulchritudinous going on.

Admittedly, I bring my own … perspectives.  Which is how this pieta, already quite dramatic viewed straight on … 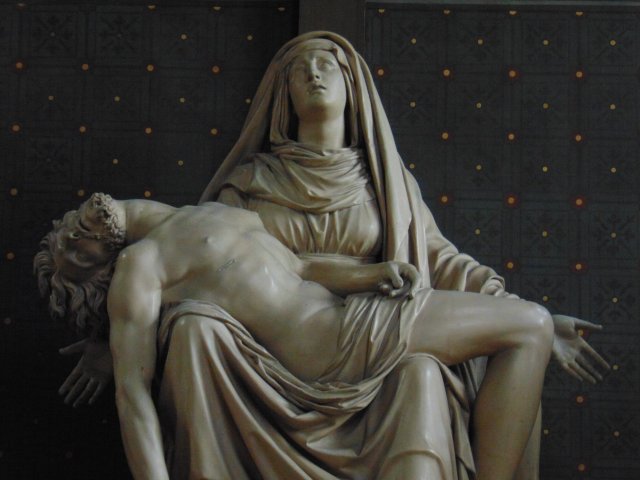 … takes on greater suggestiveness when photographed so:

Before I am charged with blasphemy, let me just add that although I saw great sensuality in many other statues in Paris churches, it was a sensuality of emotion and delicacy and feeling perfectly in keeping with religious sensibilities: 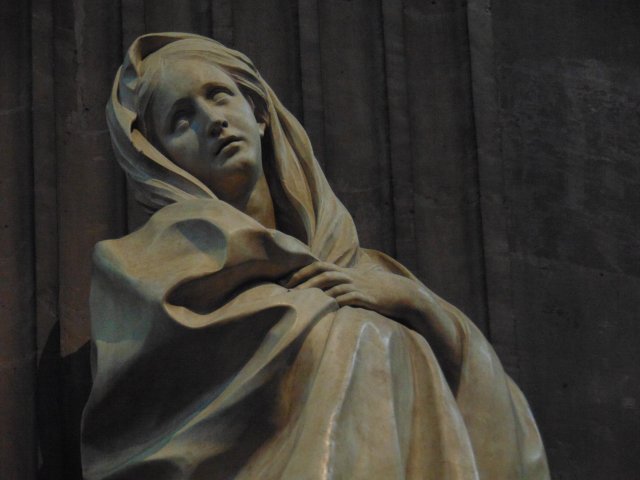 Or maybe, giving that last one a second look, not purely religious.  Sometimes the blasphemous view enters more easily into the eye of the (earthy-minded) beholder.

And finally, across from the Church Saint Germain, this unexplained statue on top of a building stands high above us, stretching his arm.

Let’s take a closer look shall we?

I love that he’s a musician.  So let’s have him take the final bow of this post. 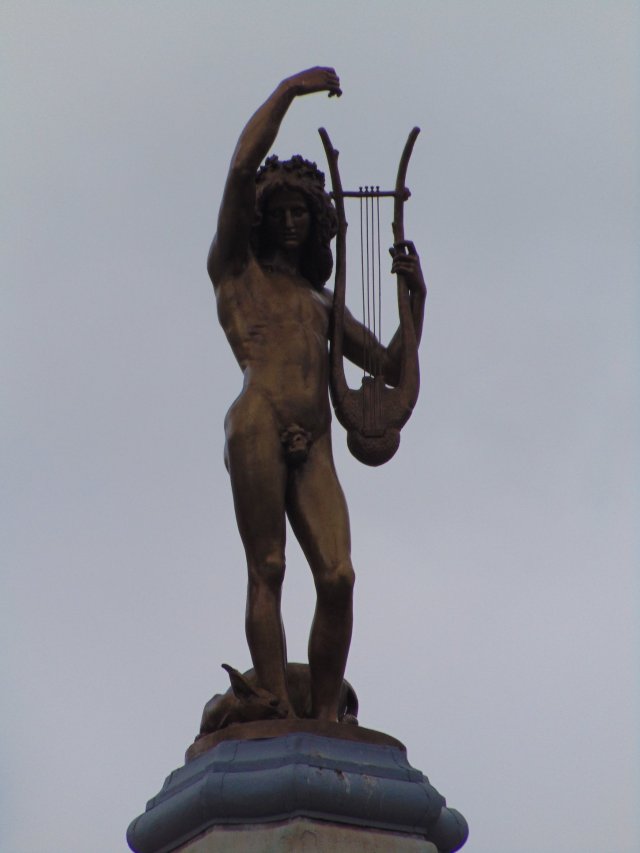 (More sensual statues to come.  The D’Orsay and Rodin museums alone each warrant their own blog chapters.)