WIZARDS AT THE LYRIC

My birthday present – my quite extravagant birthday present to myself – was tickets to the two-part all day performance of “Harry Potter and the Cursed Child” at the Lyric Theatre in New York.  And since today is Harry Potter’s birthday, as well as his creator J. K. Rowling’s birthday, I thought this is a good day to share some impressions.

And yes, I will “hashtag Keep the Secrets”, although I do wonder where the Magical Powers That Be draw the line.  Is sharing evocative details from the Lyric theater’s wizarding-world-related renovation violating the Unbreakable Vow?  Will Ministry of Magic aurors swoop down on me, confringo-ing my blogpost (or rather, considering my location, will I be busted by MACUSA agents)? 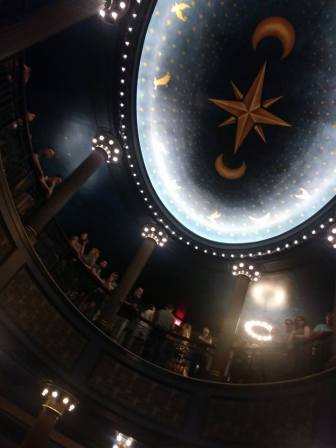 I write not to reveal story secrets but to praise the stagecraft, of which the enveloping atmosphere of the Lyric is one winning element.  Of the story, I’ll just posit that “Harry Potter and the Cursed Child” is not, as marketers will have you accept, “the 8th book” or even “the 8th part” in the Harry Potter literary saga.  The seven Harry Potter books are their own contained galaxy, and the movies, the original adaptations and the Fantastic Beast films, as well as the play and its published script, occupy their own wonderful galaxies within the same universe.  At least that’s the perspective I believe allows for the greatest appreciation of all the “content” the Wizarding World provides.

Case in point, without giving away too much, I’ll just say two words: Time Management.  I read the script of “Cursed Child” as soon as it was published, nearly two years before I would see it performed on stage.  Early on it became clear the use of time, both as a plot device and a story structure device, would be quite different from what was experienced in the original books.  Reading this on a page, in a hard covered book, I felt my internal resistance grow.  But then I took a breath, reminded myself that this isn’t a book, it is the script of a play, and just like the movies it must tell its story in its own way to suit the art form.  The Harry Potter movies changed the stories at times to work as cinema, and these were direct adaptations of the original books.  The Harry Potter play is not an adaptation of the books, as it takes place when Harry, Ron and Hermione are middle aged adults.  As such it can fly even freer than the movie adaptations, and thus imagines a tale that is designed to resonate as a theatrical experience first and foremost.  The story and the telling of the story are made powerful because of the special properties of live theater. 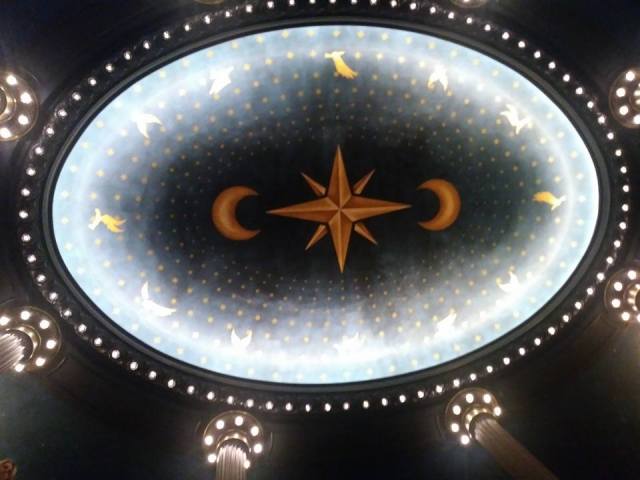 So I may have been concerned that certain tropes of “Time Management” familiar from other corners of fantasy culture but heretofore not part of the Harry Potter world become a major part of this story.  But it turns out their unique inclusion in “Harry Potter and the Cursed Child”, unique to Harry Potter and unique even to the stage as a storytelling device (as far as I know), is a vital inextricable part of the production’s dramatic power. 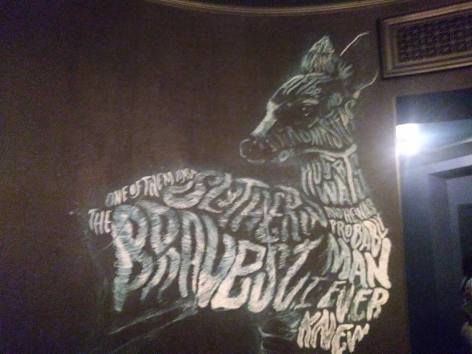 The walls of the Lyric Theatre’s foyer are painted with Patronuses – magical protective animals of light – which hide quotes from the Harry Potter novels in their designs.

The story and its relationship to time serves to put the characters we’ve know as children, and now also their children, into a variety of extreme circumstances that forces us to see them in new fascinating, ever evolving ways. (And if I explained more precisely how that is I would definitely not be hashtag keeping the secrets anymore.)  It also allows for some intense intimate scenes between characters.  Some of the most affecting moments are when two characters are simply talking to each other.  Words, acting, the drama of a relationship, those universal touchstones of the best plays are also what distinguishes “Harry Potter and the Cursed Child”.

But what about the magic?  The special effects?

Well, yes, of course that is a big brilliant part of the play.  But believe me, this production would not have been embraced by the West End and Broadway communities (showered with 9 Olivier and 6 Tony Awards) if the words, acting, drama weren’t as potent as the magical effects.

What is so wonderful is how good the magic is, how respectful of theater history, and how it engages with the most important part of the theater experience: the audience’s active imagination.

When I read the script I was continuously wondering “how on earth are they doing this?”.  Then when I saw the production I was struck first and foremost by the delight in seeing so much wonderful illusion and theatrical ingenuity, but also couldn’t help myself happily reconstructing what the actors and stage crew were likely doing to make all of that theater magic come to life.  And though the mechanics behind some illusions remain a partial or complete mystery even upon reflection, I believe it is safe to say that although the makers of “Harry Potter and the Cursed Child” may have included some cutting edge up-to-date special effects, the lion’s share of the magic on stage, both magic spells and theatrical storytelling devices, draws on a long tradition of practical stagecraft.

The wallpaper inside the Lyric theater. The patterns are abstract but easily evoke all sorts of magical figures if you look for them. A kind of wizarding inkblot test.

It’s as if the director, writer and illusionists reached not for the most cutting edge or never before seen technique that could be employed, but what from hundreds of years of the craft of theater and stage illusion would be the right choice for any particular moment.  Leading to a near encyclopedic variety of methods deftly employed.

Some of these are of the “omg how did they do this” variety, but most are easily sussed out, taking away nothing of their brilliance in the moment.  And many are openly transparent in their execution.  For example, in one magical moment there is puppetry involved, and the actor manipulating the puppet is visible on stage.  There are other instances of puppetry where the audience doesn’t see the strings being pulled, so to speak, or who is pulling them, but here we not only see it, but see a particular character in costume as the puppeteer, which adds an uncommented upon level of symbolism to the moment.  I give this (hopefully still spoiler free) example to illustrate how each magical moment is considered individually not merely as an illusion but also as a storytelling device.  And how in addition to the “wow” factor, there is also often a certain subtlety at work, asking the audience to lean in, and bring their own imagination to add to the illusion and emotion of the moment. 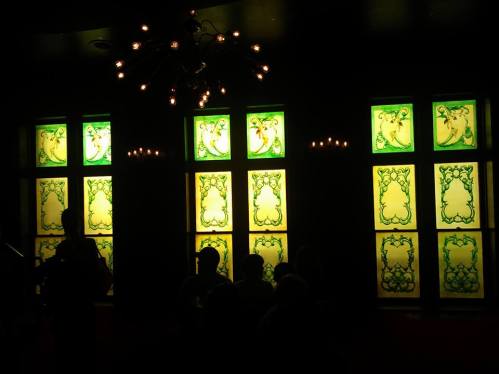 I would posit that 80-90% of the magical stagecraft in Cursed Child could have been achievable 50, 70, maybe even 100 years ago – not that they had been, because some of these theatrical innovations may have entered history later; but that from a physical, technological point of view, most of these magical illusions are rooted in possible stagecraft that goes far back in theater history.

Which gives them a tangible realness that makes the work more engaging and exciting.  I have not yet seen “Frozen” on Broadway, but I did see an excerpt on TV of the musical number “Let It Go”.  When Elsa uses her magic powers to create immense snow and ice structures, large video screens surrounding her show elaborate animation of crystals and icicles and snow flakes forming and combining.  It is impressive.  Yet the biggest gasp from the live audience on TV came when Elsa made a split second total costume change on stage.  It’s a physical trick of costuming ingenuity that astounds us all the more because we are seeing it happen there physically before us, we know it is not created on a computer or projected on a screen, it is real, and we are amazed.  That is true theater magic.

And that is what amazes in “Harry Potter and the Cursed Child”, the physical tangibleness of its magic.  Which isn’t to say that computers and video technology don’t factor into the proceedings.  I’m just not absolutely sure they do.  That 10-20% of its illusions I couldn’t completely satisfactorily figure out in my mind may very well include some use of computer generated projections.  One particularly awe inspiring effect regarding Time Management (there’s that term again) may be a sophisticated lighting effect, or a sophisticated video projection or a combination of both, I don’t know for sure.  The point is, if/when these effects are incorporated they are done in a way that upholds the illusion that everything is still physically happening on that stage in front of you, not a cgi effect or large screen projection reminiscent of the movies or arena concerts.

Perhaps the most emblematic example of the overall staging magic of “Harry Potter and the Cursed Child” rests in the staircases.  Remember the moving staircases of Hogwarts Castle?  When I read the script I wondered whether we would see massive lumbering scenery controlled by computers, like the famous gothic staircase from the musical “Sunset Boulevard”.  No, not at all.  Instead there are two staircases, skeletal in structure and thus see-through, set on wheels with which they can be easily rolled off and on stage.  So when the Hogwarts staircases are moving about, the stage staircases are literally rolled about, visibly pushed around in a choreographed dance by actors in Hogwarts robes.  It is disarmingly simple and imaginatively effective.  These staircases, together and individually, are utilized whenever their presence helps in scene setting and storytelling, evocatively aligned in all possible angles, their skeletal see-though structure both opening up many points of view and allowing for the audience to fill in the negative space with their imagination, such as when we revisit young Harry Potter’s cupboard under the stairs.

The use of these stairs, their dramatic fluidity, the actors manipulating them in full view, their structure both concrete and evocative, the variety of stage pictures and emotional resonances coming into play, is but one element in “Harry Potter and the Cursed Child” that illustrates both the amazing resources and complexity of this production, but also includes a trust in simple but effective, deeply theatrical devices that both delight an audience as well as engage its own creativity and imagination.

And that is truly magical.