So, Apparently the Corpse of Harry Potter Washed Up on a Beach

The following contains details of the movie Swiss Army Man, starring Paul Dano and Daniel Radcliffe, as well as of the Harry Potter series which many will consider spoilers.

As well as ghastly many references to bodily emissions, which may spoil much too. 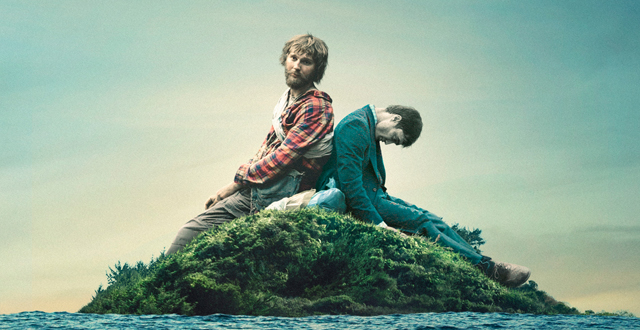 So, apparently the corpse of Harry Potter washed up on a beach.  I was stunned and dismayed to see this, since last I’d heard Harry Potter was alive and well, 37 years old, and bringing his two eldest children to the Hogwarts Express on platform 9 3/4 in Kings Cross.  The Potter corpse on the beach looked to be in his mid to late twenties.  Granted, I didn’t know much about what Harry had been up to between defeating the Dark Lord two months shy of his 18th birthday and the trip to the train station 19 years later.  Maybe there was a beach side adventure in his twenties?  But he couldn’t be actually dead on the beach like Dobby?  Not if he will start a family and drop the kids off at school a decade later?  After all, even in the magical world, as J. K. Rowling has confirmed many times, dead is dead. Or?

Harry and dead Dobby on the beach

There was only one witness present at the beaching of Harry Potter’s apparently dead body.  Unfortunately this was not a wizard who would recognize a hero from his world, but a ship-wrecked muggle named Hank, who did not know the Chosen One from Adam, and proceeded to calling him Manny.  He first regarded Harry as a mere lifeless body, albeit one still exuding some gaseous fumes.  Eventually these farts revealed themselves to be a particular potent expression of Harry Potter’s signature magic spell: Expelliarmus!

Hank and dead Harry on the beach

You see, it was soon apparent to a connoisseur of the Wizarding World that Harry was not dead, but suffering from a devilishly potent and only very-slowly-wearing-off spell of Petrificus Totalus.  Now Hank thought he was going crazy, imagining himself hallucinating a dead body becoming partly reanimated, when he was simply witnessing Harry’s snailpaced unfreezing from the body binding curse.  Eventually Harry was moving his eyes, then speaking haltingly and shifting his facial expressions.

Harry’s Expelliarmus spells were being emitted backside and reoccurring unbidden and unceasing much like Ron’s self-inflicted slug-spewing during his second year at Howarts.  Unfortunately Hermione wasn’t around to counteract the effect of the gas with a sound- and odor-inhibiting Muffliato spell.   Harry’s corpse started shooting across the shallow surf as if charged by something I’d call  Propellus Gastrointestinicus.  Hallucinating or not, Hank took advantage of Harry’s redirected and explosively magnified Expelliarmus spells to jet-sky on Harry’s back to the main land.

It would not just be the Expelliarmus spell that would become useful if bodily redirected by the effect of the stubborn Petrificus Totalus curse.  The Aguamenti spell would slake Hank’s thirst with water gushing in torrents out of Harry’s mouth.  The Confrigo spell would protect Hank from a bear with a flamethrower effect (out the backside again, natch), so powerfully, in fact, I feared Fiendfyre might have been unleashed once more, just as in the doomed Room of Requirement during the legendary battle of Hogwarts.  At another point I was sure Nagini, Voldemort’s horrific snake, had made its way into Harry’s pants, but it was just his penis incorporating the Point Me spell (AKA the Four-Point spell, and now rechristened the Erecto spell in my mind) to lead Hank back to life saving civilization.  Hank even exhorted Harry to have “happy thoughts”, but sadly, Harry was not able to produce a Patronus in his Petrificusly frozen state.  Possibly because Harry had no memory of who he was or his former life.  Had an unreformed Deatheater obliviated his memories before administrating the body-bind curse and dumping him on the beach?  If only J. K. Rowling would confirm if any of this is canon!

Harry’s strange adventures with Hank not only involved bodily reconfigured magic spells, but also scenes reminiscent of Harry’s teenage adventures.  There were shy, romantic encounters with a red-haired girl that echoed Harry and Ginny’s courtship.  There was underwater excitement worthy of the Second Task in the Triwizard Tournament, including a rocketing leap out of the water.

I don’t want to give away too much more of the story, especially the extraordinary conclusion, except to say that for about 5 minute it seemed as if Steven Spielberg had finally made a Harry Potter movie after all.

The few audience members witnessing these events with me in a sparsely attended 5pm screening were as gobsmacked and delighted as I.  Incredulous but appreciative laughter burst and reburst in splurts and sustained ripples deep into the credits.

All was well.  Completely demented.  But well.

Now I realize I have made not one reference to music, and this being a blog called “Notes from a Composer” that is probably a failing.  I could say the soundtrack of Swiss Army Man very appealingly features male voices singing wordlessly and a cappella.  But more in tune with the movie, I’ll conclude with this musical reference: 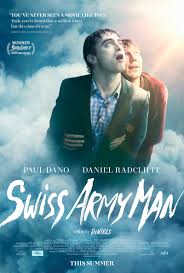