A ROSE BY ANY OTHER SONG WOULD SOUND AS SWEET

Posted on June 9, 2016 by dannyashkenasi

It’s June, rose blooming season.  So let’s enjoy some beautiful roses, and since we can’t enjoy their visual splendor accompanied by their sweet smells, we’ll enjoy their sweet sounds in the forms of favorite “Rose” songs from the last hundred years.  And right off the bat I concede that my bastardization of the famous Shakespeare quote “a rose by any other name would smell as sweet” (Romeo and Juliet, Act 2, Scene 2) in this post’s title mangles the original beyond logical comprehension.

Can’t not start this rose themed medley without “The Rose”, which is arguably The Rose Song  above all.  It already sounded like a classic when it came out in 1979.  I remember hearing it sung again and again at my high school’s musical auditions, music concerts and talent shows.  There were those who would cattily slack the song’s lyrical conclusion (“Just remember in the winter – Far beneath the bitter snows – Lies the seed that with the sun’s love – In the spring becomes the rose”) by asserting that roses are cultivated by making cuttings, and are not grown from seeds.  That became a common refrain of ridicule against the song among my high school peers.  But of course in the wild, before mankind got their grubby cultivating hands on them, roses propagated by growing from seeds just like any other plant.  Silly teenagers! 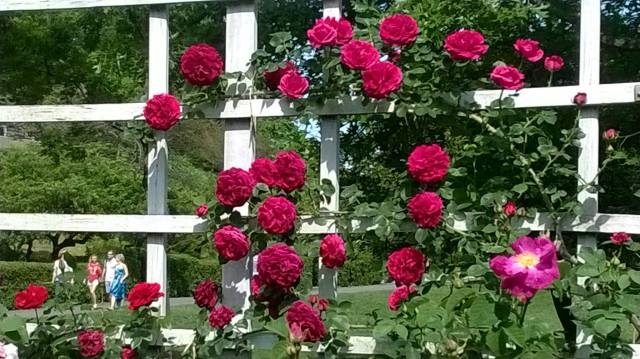 I’m sure there are those who would rank La Vie en Rose above The Rose as the #1 Rose song of the last hundred years.  And I agree La Vie en Rose has a stronger claim on evergreen status than any other tune listed here.  The problem with the song, for the sake of this article, is that the “rose” in La Vie in Rose more likely refers to the color pink than the flower.  That doesn’t disqualify it from this countdown, but explains why Bette Midler gets pride of place before Edith Piaf.  But only barely.

Most of these rose pics were taken in the Brooklyn Botanical Garden, which boasts one of the largest collections of roses in North America.

A Rose by any Name – Blondie (featuring Beth Ditto)

Speaking of pride, June is not only rose blooming season but also Pride Month.  So to celebrate LGBTQ Pride, take in Blondie’s Deborah Harry dueting with the self-described “fat, feminist lesbian from Arkansas” Beth Ditto:

If you’re a boy or if you’re a girl
I love you just the same
Wherever you go, all over the world
A rose by any name

I wouldn’t be surprised if this post is the first you ever hear of Blondie’s “A Rose by any Name” which of course neatly ties in to the featured Shakespeare quote as well as Queer Pride.

The next two Rose titled pop songs, for better or for worse, have been ubiquitous in popular culture, with every likelihood of sticking around in the public musical tapestry for years to come. 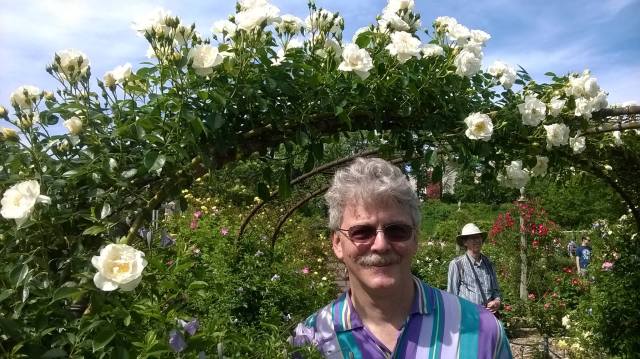 My husband Edward under the roses.

Every Rose has its Thorn – Poison

There is a certain irony to the fact that no matter how many hard rockin’ testosterone struttin’ jams heavy metal and hair metal bands play, the song they will most likely be most remembered for is that one sad ballad that becomes the band’s biggest (if not only) hit.  So it is with Poison’s “Every Rose has its Thorn”.  Audio track coding restricts me from posting anything but a link to the YouTube video, so you must click on the title above to give a listen.  Sorry for the inconvenience, but that’s just the way it goes sometimes. After all, every rose has its thorn, (yeah, it does).

A Kiss from a Rose – Seal 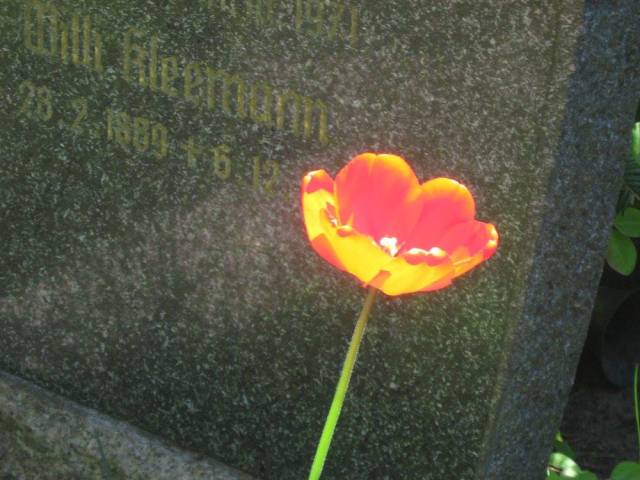 A Kiss from a Rose on the Grave.  Except in the song it’s not the grave after all, it’s the grey; and moreover, this is no rose but a tulip…

Dance of the Rose Maidens – Khachaturian

Moving on to instrumental Rose compositions.  From the world of classical music we turn to Khachaturian’s Dance of the Rose Maidens from the Ballet Gayaneh, which also gave us the very famous Sabre Dance.  And I must of course include the track simply called “Rose”, from Titanic, the “highest selling primarily orchestral movie soundtrack ever”. 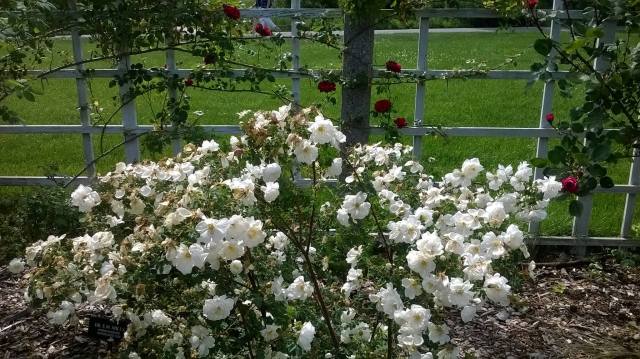 And then there are all those musical theater Roses!  Such a variety to choose from!  Beginning with one of the most famous musical roses, the Second Hand Rose from Second Avenue made famous by Fannie Brice in 1921’s Ziegfield Follies and recreated by Barbra Streisand in the movie musical about Fannie Brice “Funny Girl”.   The musical Bye Bye Birdie gives us two Rose songs, the electrically empowering “Spanish Rose” and the insipid “Rosie” (it really is an awful final song marring an otherwise totally winning, splendid musical, full of inane lyrics like “now my life is rosy since found my Rosie” glopped over a cloying nursery school melody – I hate it so much I refuse to share a recording).  And in honor of Pride month I must give a shout out to Rocky Horror’s genderfluid pansexual “Rose Tints my World“.

I give up.  And will cheat by doing the Pride Month thing instead and tossing roses to all the many hundreds of thousands of gay men who have over the years gone full diva in piano bars, cabarets, living rooms and bath houses all over the world essaying their own best Mama Rose.  I wouldn’t be surprised if more individual men than women have belted out these two divalicious numbers, even if to smaller audiences.


For “Everything’s Coming Up Roses”, this clip from the movie The Fisher King (although I admit it borrows more from “Some People” than “Everything’s…”, but what the hey):