Posted on January 24, 2016 by dannyashkenasi 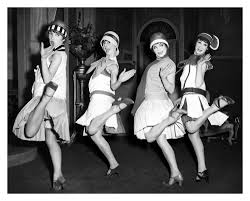 Introducing the latest dance craze from the Roaring Twenties: The Lobster Charleston!

Yes, it’s a novelty dance, like the Turkey Trot, or the Chicken Dance, or the Macarena, the Mashed Potato and Gangnam Style.

But it’s imaginary, existing as a popular pastime in the fictional Wonderland nightclub in the musical “Speakeasy“.  Imaginary, so far.  I just witnessed our choreographer Alan Hanna teach it to the cast of Speakeasy.  This could catch on!

It is during this goofy novelty number that our heroes, John and Jane Allison let down their guards a bit and agree to dance with Julian Carnation and Duchess Bentley.  That is, John dances with Julian, and Jane dances with Duchess. 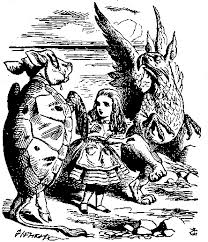 The Lobster Charleston is a more happy tune of nonsense, befitting the happy-go-lucky ethos of Roaring Twenties Speakeasy culture.  It is also the one song in “Speakeasy” most closely aligned lyrically with Lewis Carroll’s original writing.  There are many poems and pieces of verse in the Alice books, including “Jabberwocky” and “The Walrus and the Carpenter”.  I hoped at least one song in “Speakeasy” would include lyrics that directly referenced Lewis Carroll’s verse.  Thus The Lobster Quadrille inspired The Lobster Charleston, the silly novelty tune and dance craze that becomes the unlikely catalyst for John and Jane to separately and simultaneously take a few crucial dance steps closer to homosexual infidelity.

WILL YOU JOIN THE DANCE

WON’T YOU JOIN THE DANCE

BIB AND BOB AND HOB AND NOB

WITH LOBSTERS IN THE SWELLS

TO TURTLES IN BAND SHELLS

WOULD NOT JOIN THE DANCE

COULD NOT JOIN THE DANCE

NO SHE CRIED OUT

JUST HOW WET A SOUL CAN GET

WHEN TOSSED INTO THE SEA

At last the Mock Turtle recovered his voice, and, with tears running down his cheeks, he went on again:

“You may not have lived much under the sea—” (“I haven’t,” said Alice)—”and perhaps you were never even introduced to a lobster—” (Alice began to say, “I once tasted—” but checked herself hastily, and said, “No, never”) “—so you can have no idea what a delightful thing a Lobster-Quadrille is!”

“Why,” said the Gryphon, “you first form into a line along the sea-shore—”

“Two lines!” cried the Mock Turtle. “Seals, turtles, salmon, and so on: then, when you’ve cleared all the jelly-fish out of the way—”

“That generally takes some time,” interrupted the Gryphon.

“Each with a lobster as a partner!” cried the Gryphon.

“—change lobsters, and retire in same order,” continued the Gryphon.

“The lobsters!” shouted the Gryphon, with a bound into the air.

“Swim after them!” screamed the Gryphon.

“Turn a somersault in the sea!” cried the Mock Turtle, capering wildly about.

“Change lobsters again!” yelled the Gryphon at the top of its voice.

“Back to land again, and—that’s all the first figure,” said the Mock Turtle, suddenly dropping his voice; and the two creatures, who had been jumping about like mad things all this time, sat down again very sadly and quietly and looked at Alice.

“It must be a very pretty dance,” said Alice timidly.

“Would you like to see a little of it?” said the Mock Turtle.

“Come, let’s try the first figure!” said the Mock Turtle to the Gryphon. “We can do it without lobsters, you know. Which shall sing?”

“Oh, you sing,” said the Gryphon. “I’ve forgotten the words.”

So they began solemnly dancing round and round Alice, every now and then treading on her toes when they passed too close, and waving their fore-paws to mark the time, while the Mock Turtle sang this, very slowly and sadly:

“Thank you, it’s a very interesting dance to watch,” said Alice, feeling very glad that it was over at last: “and I do so like that curious song about the whiting!”

Go to Speakeasy or to The Speakeasy Chronicles category tab or the Speakeasy Soundcloud page for more “Speakeasy” articles and music.