Posted on October 9, 2015 by dannyashkenasi

Wednesday we had a mini film crew in the house.  Henry Borriello and Stolis Hadjicharalambous (try typing that out real fast) agreed to help us out filming the promo video not required but very much encouraged if you are planning to set up a fundraising campaign on a certain kicky website.  And Speakeasy is going to require some serious fundraising to realize the four week large ensemble showcase run next February at the Theater for the New City.

Director Lissa Moira, Music Director Jonathan Fox Powers and Co-Producer (and husband o’ mine) Edward Elder joined me in imparting their views on the Speakeasy Project to the camera in what we jokingly called our “Masterpiece Theater” chair, the burgundy lounge chair Stolis chose to be the interviewee’s seat, and which we moved in front of the bookcase for best framing.

The fundraising campaign and the video accompanying it will go live in November.  Until then, here are some shots from the shoot.

Danny and Stolis checking out the framing of the shot

Here’s looking at you, kid.

“Art Directing” the part of the bookcase that’s in frame behind the chair. Each book and knick-knack was “selected”.

Checking out the screen shot 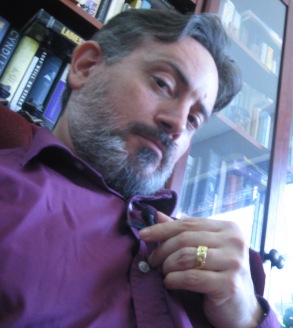 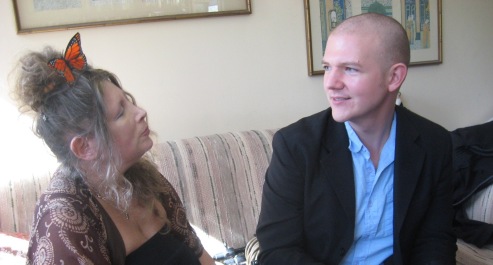 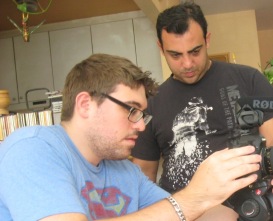 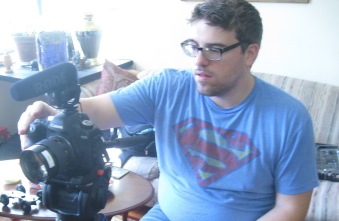