CHASING WATERFALLS – The Flabbergasting Force of Foz do Iguacu 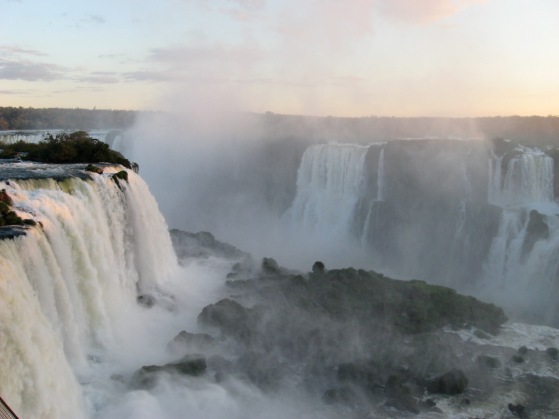 Time for another bout of Two-fisted Touristing with musical accompaniment.  Today the amazing Foz do Iguacu waterfalls, which cascade partly in Brazil, where Ed and I first encountered them three years ago, and partly in Argentina, where we saw more of them on a day trip visa the next day.  This collection of enormous waterfalls covering several square kilometers requires at least two days to be fully explored (regardless of border crossing issues).  They are astounding in person.  I hope these pictures give at least some indication of their awesome power and beauty. 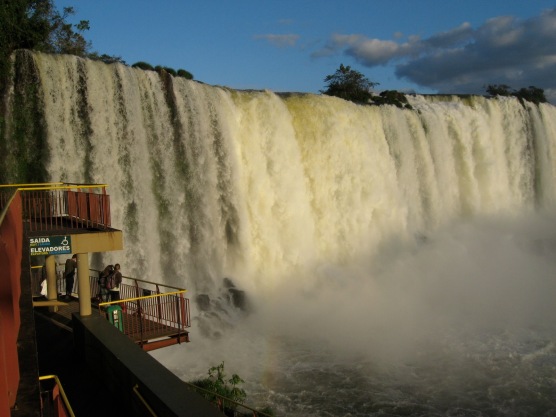 We’ll start on the Brazilian side of the falls. 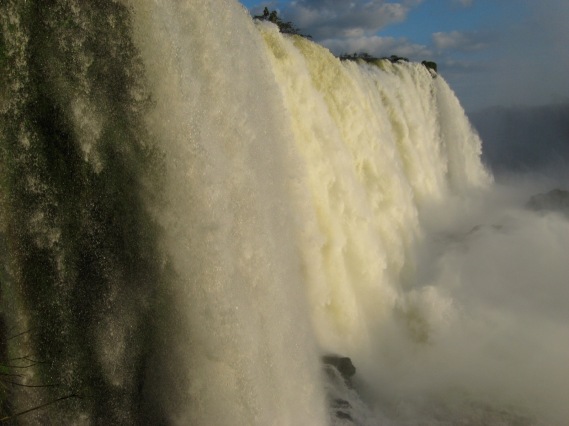 It may be called Water Music and it’s very pretty, but does it sound watery?  Or even flowing?  A little near the end, I suppose, but certainly not cascading…

How about Saint – Saens’ Aquarium from Carnival of the Animals: 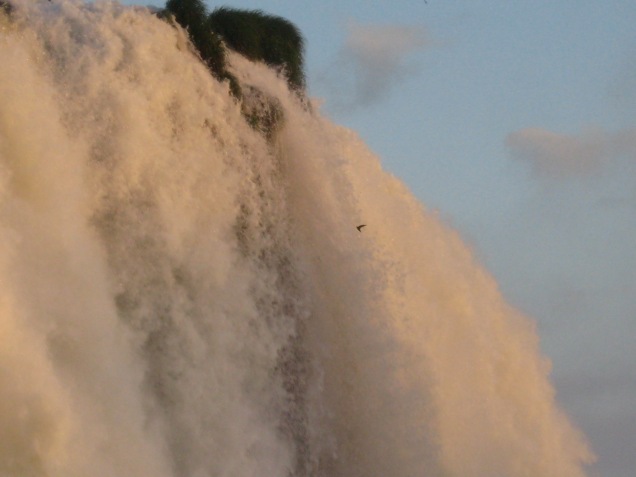 Speaking of Animals, do you see the bird flying INTO the waterfall? These birds, Great Dusky Swifts, have their nests on the inside and could be seen diving in and out of the falls all evening. 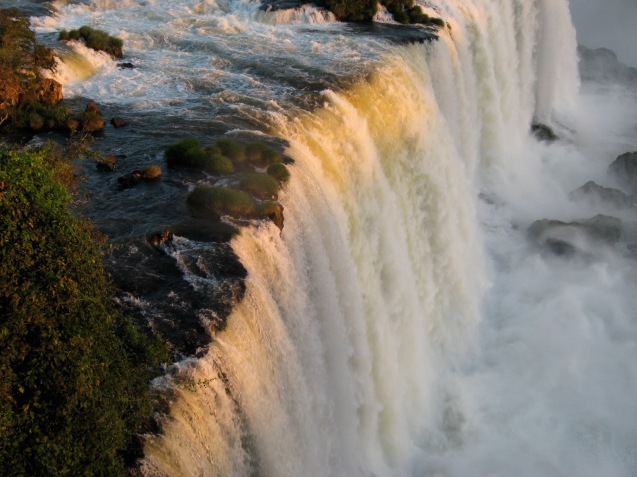 I first heard Saint-Saens’ magical piece of twinkling, flowing, cascading music when it was used quite effectively as the main theme for the documentary on cinematography “Visions of Light”, whose smorgasbord of visual splendors I dined on often, always lamenting that the credits never listed what beautiful music the documentary was featuring as its main theme.  Finally some moderately intense internet sleuthing led me to Aquarium by Saint-Saens.

I love the Saint-Saens, but it is perhaps a little too twinkling for such massive waterfalls? 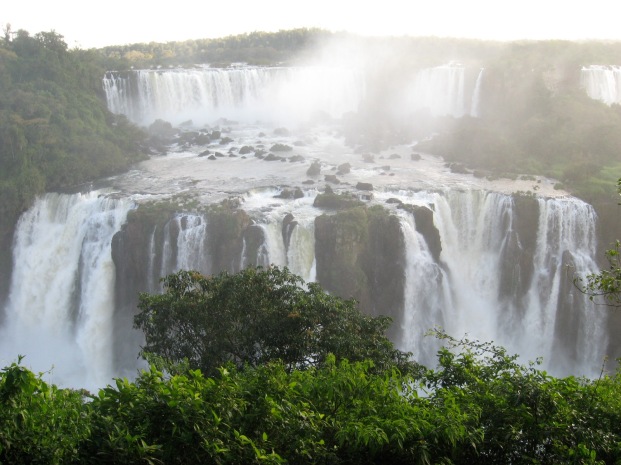 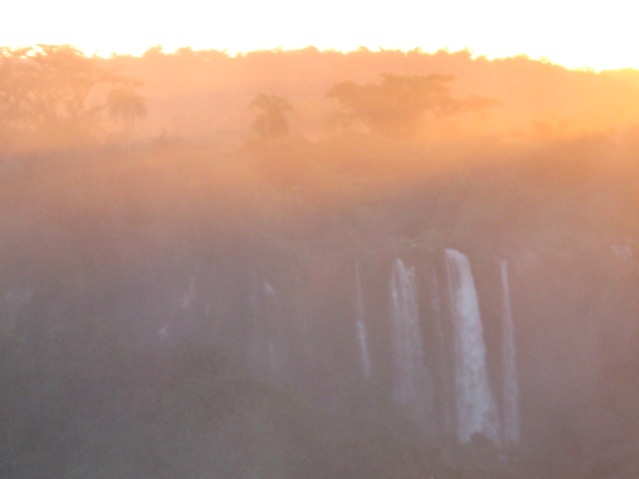 This is just the beginning.  And was a taste of the view from Brazil.  Next stop is the next day in Argentina.  Also, Beethoven produces the ultimate in cascading awesomeness.  And, of course, TLC…

You can see the most massive Foz Do Iquacu waterfall, the Devil’s Mouth, from Brazil, but the eye-popping close up view is had in Argentina, after traversing a kilometer long walkway over the area where the Iquacu river spreads out ahead of cascading downward via dozens of waterfalls. 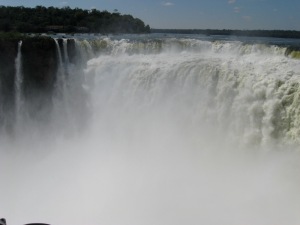 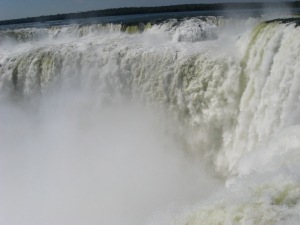 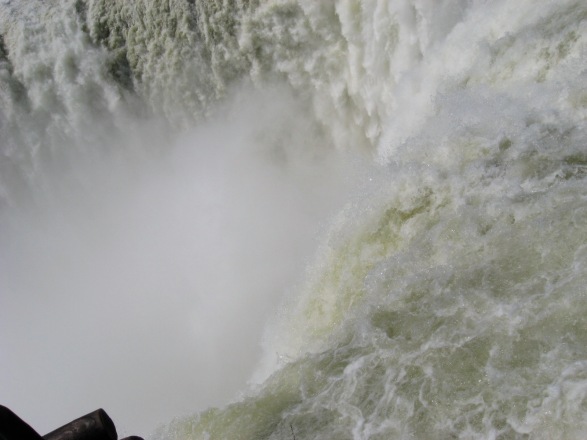 Staring down the Devil’s Mouth, the most massive waterfall of Foz do Iguacu, shaped like a horseshoe

The conclusion of Beethoven’s Leonore Overture #3 (yes, he wrote three versions of the opera Leonore, and thus three overtures, before finally being happy with the fourth attempt at his first opera, which he renamed Fidelio, and for which he composed yet another overture…) where was I?  Yes, the conclusion of Beethoven’s Leonore Overture #3 starts with a mindbogglingly awesome cascade of string playing that to me sounds like the most perfect evocation of massive waterfalls in classical music.  The rest of the finale is pretty damn fitting too: 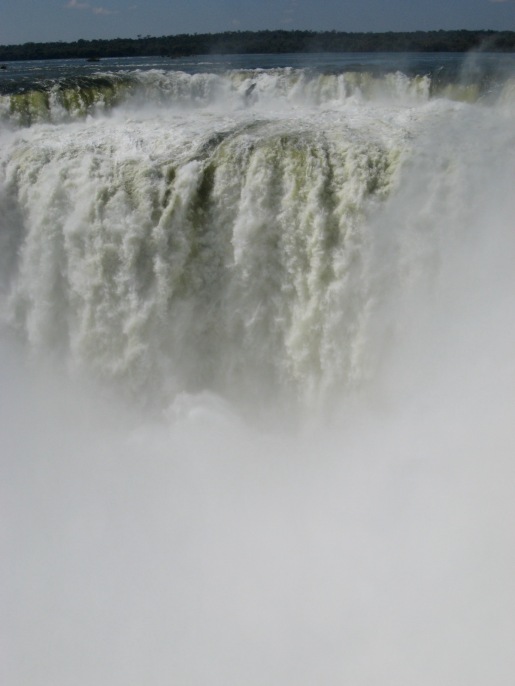 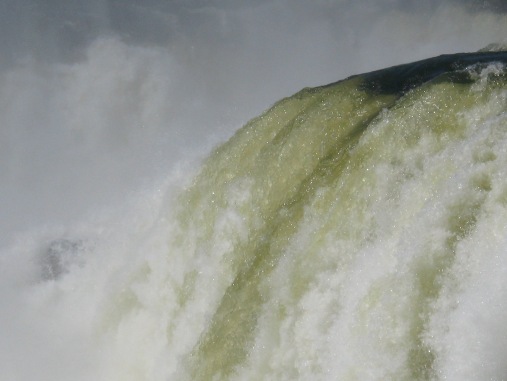 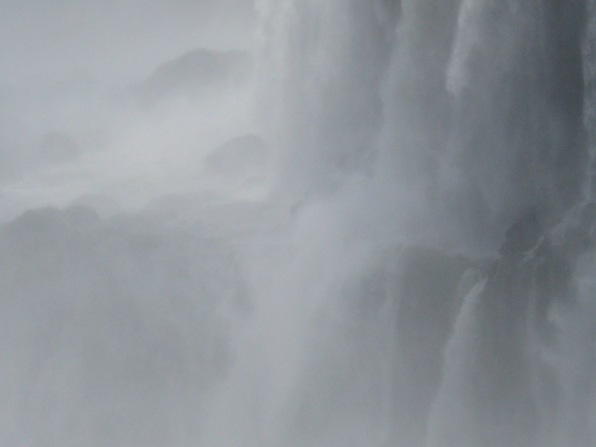 I know it’s “Chasing Waterfalls”, and TLC is just around the corner, I promise.  But first listen to these 35 seconds from Bernard Herrman’s Psycho soundtrack.  No, not the famously screeching killer violins from the shower scene, but this driving, churning segment called “Discovery” (Mrs. Bates in the cellar…).  At the 22 second mark you will hear why I absolutely had to add this track to the waterfall music collection… 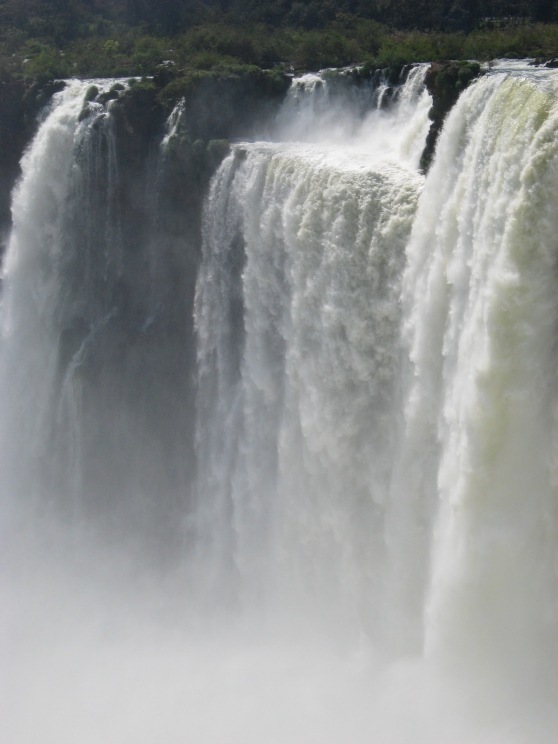 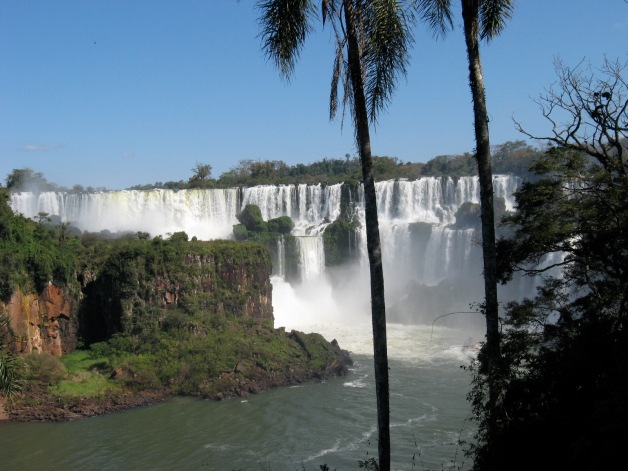 OK, here it is, the most famous song with the title “Waterfalls”, by TLC: 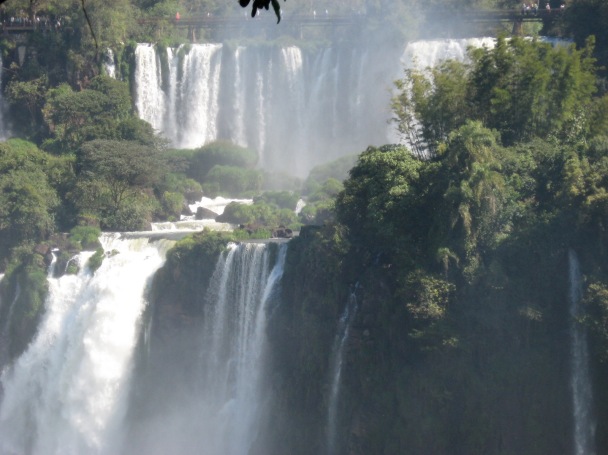 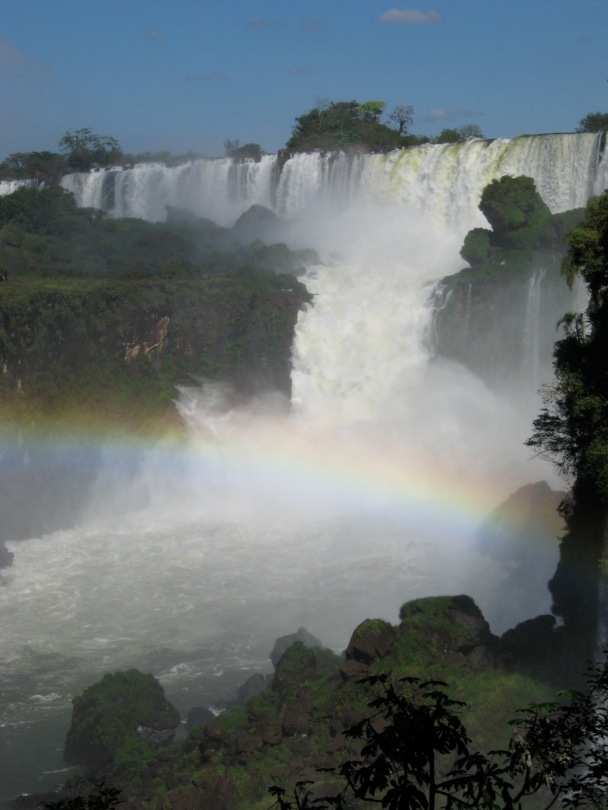 And if you are of a more, eh, advanced generation, you might actually be more aware of Paul McCartney’s Waterfalls than TLC’s.  Whereas TLC declare “don’t go chasing waterfalls”, Paul advises “don’t go jumping waterfalls”.  Discuss. 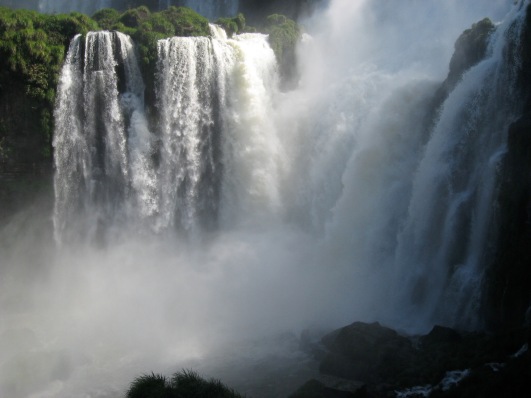 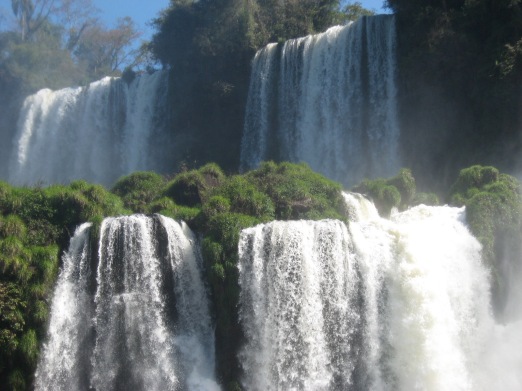 Now I digress, but I can’t help noticing these lyrics in McCartney’s Waterfalls:

Now what Big Friendly Polar Bear may be more likely to take you home? 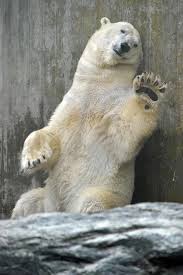 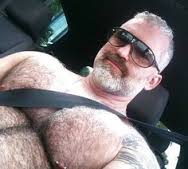 Back to the Falls, shall we? 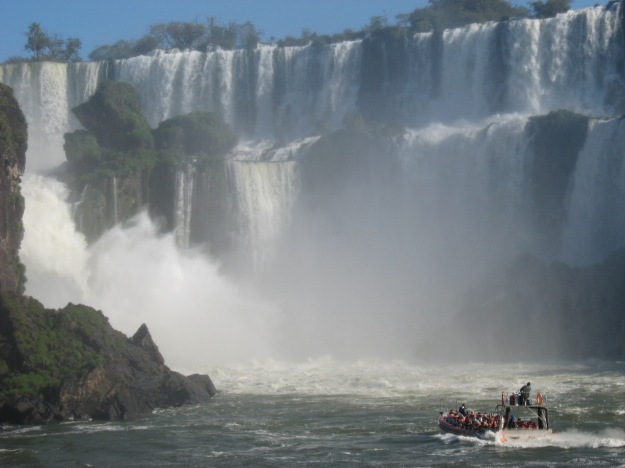 You can take a boat ride practically into the falls. It’s very loud and very wet and very exhilarating. 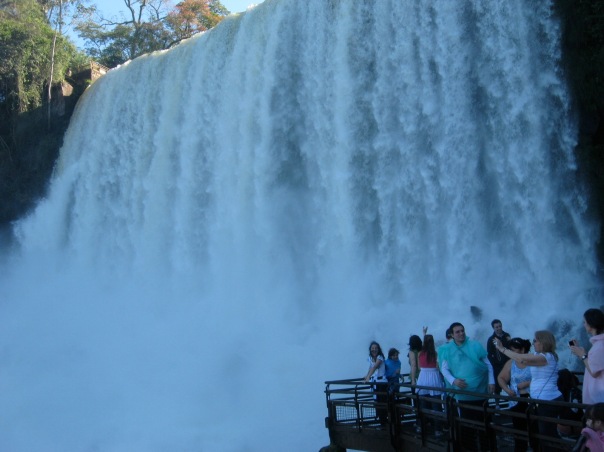 You don’t need to get in a boat to get very close to the falls though. 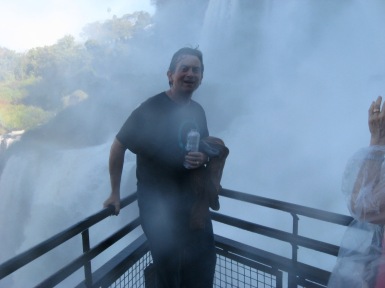 Either way, you get wet. 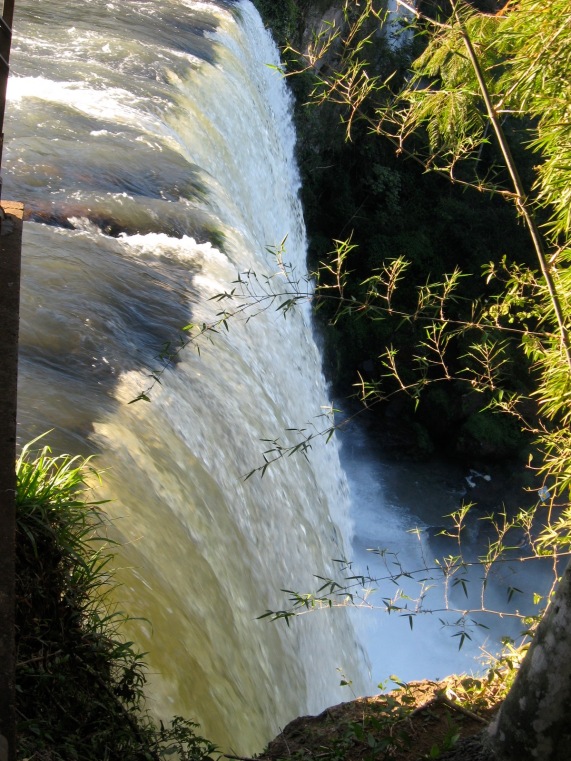 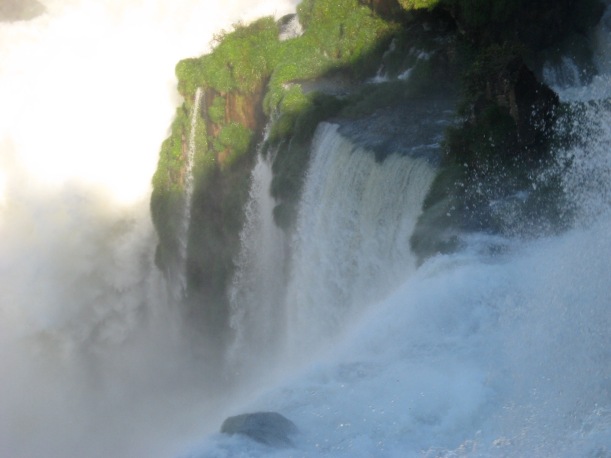 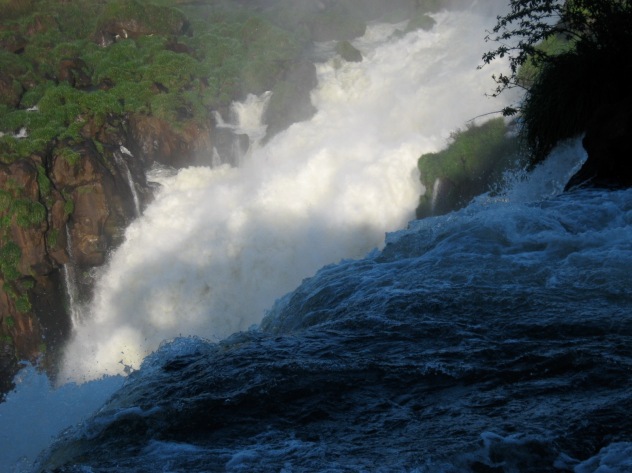