More fun with FIRST GRADE OPERAS: the King, the Queen and the Wacky Witch

“I want to find a queen who is beautiful and kind.  Let’s see what Queens I can find with my magnifying glass.  All right let’s see … here’s a Queen … hmmm, knows too much … how about this Queen? She cheats in cards – no thanks! Let’s try this Queen … looks like she never showers!  Pee-ew!  I’ll try again.  At last! There she is! That Queen is perfect!”

And so begins the second First Grade Opera performed this year (read more about how the first graders create their operas here), with King Coffern finding Queen Rose with his special magnifying glass and then singing “Love is Magical”, an unusually romantic tune for First Grade Operas.  Before I continue with the story, I should explain that when the child acting the King sings his song the whole class sings along with him.  When we perform First Grade Operas every song is sung collectively, with the “soloists” acting out the song.  The roles are also shared, with several children tag team performing each character during the course of the show.  This way every child in the class gets a solo moment even though there are on average only 4 – 6 different characters in any First Grade Opera.

But back to this opera: before King Coffern can present himself to Queen Rose, her land is rattled by a massive earthquake:

QUEEN ROSE: There’s a worm wearing a cardboard box!  But where are my parents?

KING COFFERN: There’s an elephant with a tutu!  But where are your parents?

QUEEN COFFERN: There they are! My father is stuck in an earthquake crack and my mother is trying to pull him out!

King Cofferns’ Knight Carr and Queen Rose’s Knight Rowind are dispatched to save the Queen’s parents.  This quest is successfully accomplished.  Full of gratitude, Queen Rose declares her love for King Coffern.  Love is Magical is sung again.  All are happy.

But there is a witch in the ointment: 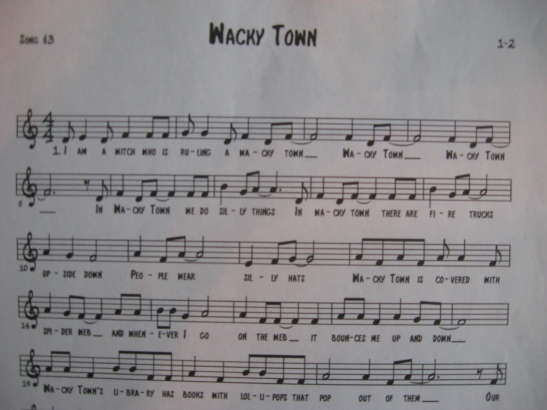 The Witch thinks the King would be perfect as the mayor of Wacky Town. She plans to get him away from the Queen.

Meanwhile Knights Carr and Rowind become friends, which entails lots of ice cream and jumping on trampolines together.  And going to lunch together, ordering the medieval meal.

The Witch plans to do such wacky tricks that the King and Queen will laugh so much they will forget their love forever.  Then the Witch will be able to get the King to be mayor of Wacky Town.  The Witch, in disguise, gets past the guards and starts her wacky song:

The Witch’s wackiness escalates into nude booty shaking and a complicated trick that somehow involves a flower in a shower and the Beatles’ “Ticket to Ride”.

King Coffern and Queen Rose start laughing so much they forget who they are:

KING: What are you?

QUEEN: Are you a mister monster?

WITCH: Oh yeah I’m winning!  Cause you forgot your love!

KNIGHTS: We better stop the witch!

The Knights can barely shield themselves from the Witch’s spells.  So they try a different tack and manage to trick the Witch into sitting on a chair that is really a catapult.  Once she is seated they pull the lever and the Witch is catapulted into the air.  As she is flung far far away, she sings this lament: 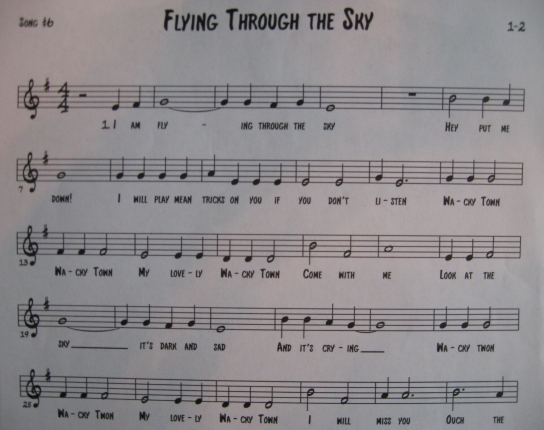 For good measure the Witch splashes into waters full of alligators.  After they have taken some pieces off of her, she vows to leave and never again return to bother King Coffern and Queen Rose, who have regained their memory of their love for each other: 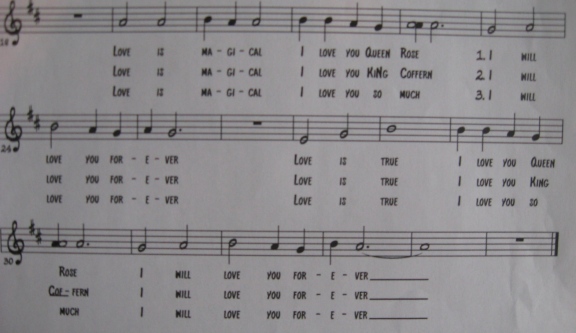